The final free practice session before the Rolex 24 ended in a red flag after Don Yount in the #38 Performance Tech Motorsports ORECA 07 found himself partly on his roof, leaned up against the tyre barrier at Turn 6. 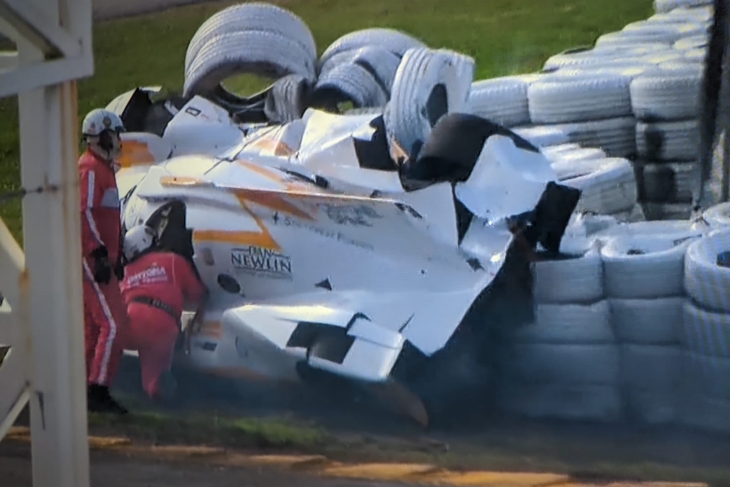 Yount got out of the car with only minor assistance because the car was leaning at an awkward angle, he later walked around the car examining the damage without assistance. Yount told DSC that his left foot, normally used for braking, caught the edge of the gas pedal leading the car to accelerate. He was able to readjust his foot but by that point, he had missed the braking zone.

The pedal box on the ORECA 07 is much smaller than comparable chassis and GT cars and getting one’s feet caught is not an infrequent incident, the consequences of Yount’s mistake, however, were larger than average.

Kamui Kobayashi, meanwhile, ended the session with the fastest lap in the #10 Wayne Taylor Racing Cadillac DPi-V.R. Kobayashi’s best lap was a 1:35.340.

Second, in DPi was Helio Castroneves in the #7 Acura Team Penske ARX-05c. It’s a confidence-boosting result for Team Penske knowing the car has not lost speed after undergoing repairs following Ricky Taylor’s qualifying crash yesterday afternoon. Castroneves’ time of 1:35.733 was 0.393 seconds behind Kobayashi.

Rounding out the top three was the #5 Mustang Sampling JDC-Miller Motorsports Cadillac DPi-V.R. Sebastian Bourdais set the quickest time in that car; a 1:36.031.

In LMP2, Nicolas Lapierre led the field in the #8 Tower Motorsports ORECA 07 with a time of 1:37.230. It had been a slow start to the weekend for Lapierre, the veteran LMP2 driver, but his return to the top of the sheets comes as no surprise.

The #18 Era Motorsport ORECA 07 was the only car that did not complete a lap in the session.

As the red-flagged was followed by the chequer with 7 minutes to go, Antonio Garcia had set fastest session time in the #3 Corvette, 1;42.962, 0.5 s shy of its qualifying time. Garcia had traded fastest times with the Porsches earlier in the session, the #912 of Earl Bamber 0.6 seconds away as second quickest, and Nick Tandy, who seems to have done the majority of the pre-race preparations for the pole-sitting #911. The feel throughout this Free Practice session was one of race installation. The #25 BMW was edging forward, Bruno Spengler aboard the white liveried M8 GTE posting 1:44.348 as the fourth fastest in the session.

Fastest session time went to the #11 GRT Grasser Racing. 1:46.308 was Franck Perera’s best, a second and a half off the last of the GTLM session times. The Lamborghini was just ahead of the #63 Scuderia Corsa Ferrari, a tenth off courtesy of Toni Vilander. The pleasant surprise was the third-place GTD time halfway into the session; Jeroen Bleekemoelen posting 1:46.467 in Black Swan Racing’s new Porsche, built up overnight. 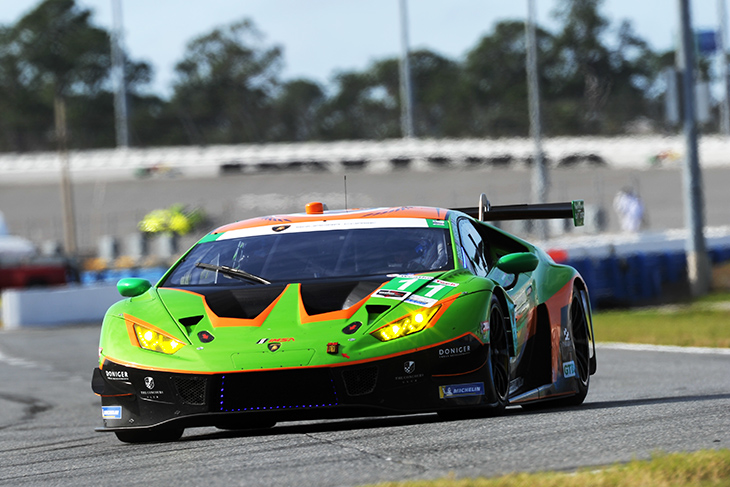 Dries Vanthoor took most of the work for the fourth place #88 WRT Speedstar Audi, looking consistent throughout this meeting so far. The #14 AIM Vasser Sullivan Lexus RC-F was back in play after its engine change, running seventh quickest in the session. It’s #12 sister car returned to its pit having outbraked itself at the Bus Stop chicane, which had seen several earlier excursions. Indeed, Paul Miller Racing’s Lamborghini had pulled up on the exit of the Bus Stop, red flagging the session briefly.

GTD pole-sitters, Pfaff Motorsports was taking it relatively easily, the car mostly in its garage but cycling its drivers in brief outings. Similarly, the #57 Acura was late into the session, turning just a handful of laps. The #86 Meyer Shank Racing Acura turned only five laps, it’s showing so far at this year’s event somewhat subdued.