With one-quarter of the race completed at the end of hour six, Rengar Van Der Zande has the #10 Wayne Taylor Racing Cadillac DPi-V.R. in control of the lead of the race. The past three hours have not been without drama, however, including minor issues for the lead car when the WTR team replaced the rear clips solve a rear lighting problem.

Second in DPi is the #31 Whelen Engineering Cadillac DPi-V.R. Filipe Albuquerque has the controls of the #31 Cadillac and is 8.154 seconds behind Van Der Zande.

The #6 Acura Team Penske ARX-05c is in third. They are one of a number of cars in a rotating cast that has spent time at the front of the DPi field, and it is still anyone’s guess on who will come out on top.

The #77 Mazda RT24-P has spent time in the lead in the past three hours. Olivier Pla had moved the car from third to first in one lap after the restart but it dropped to fourth in the pit cycle. Olivier Jarvis is back in the car after starting the race.

The #7 Acura Team Penske ARX-05c remains the only DPi car that has fallen out of contention after it was by the #55 Mazda RT24-P in the bus stop earlier in the race.

In LMP2, the #52 PR1/Mathiasen Motorsports ORECA has continued its dominance in the class. The team installed Gabriel Aubry into their #52 ORECA and he has checked out from the rest of the field.

Aubry took the restart from the full-course yellow and was matched up against John Farano in the #8 Tower Motorsports ORECA 07 and Henrik Hedman in the #81 DragonSpeed ORECA 07, both of whom are amateur drivers.

By the end of hour six, PR1/Mathiasen’s lead in the class was 88.058 seconds over the #8 ORECA 07. Nicolas Lapierre has been installed into the #8 ORECA and with Aubry nearing the end of his time in the #52 ORECA, expect that gap to come down.

Any thoughts of Porsche dominance had been challenged.

Chaz Mostert had stayed aboard the #24 Team RLL BMW during the fourth round of stops while Porsche cycled its drivers, gaining enough time to spoil the earlier 1-2 Porsche symmetry by placing the black M8 GTE second. This exposed the potential of the car, Mostert able to stick with the Porsches.

“It’s a lot of fun out there,” explained the Australian, “It’s pretty competitive, particularly ducking through the GTD’s, and the car is running smoothly. It was good to be able to mix it with the Porsches but we will have to see how that potential pans out over the distance.

This was no flash in the pan, as Jesse Krohn continued to push on in the BMW, taking the lead again before the Full Course Caution and the six-hour mark.

Corvette meanwhile had regrouped and come back though, Catsburg in the yellow liveried #3 C8R passing Tandy for second place on the back straight before spoiling the position by collecting the #98 GTD Aston Martin and spinning at Turn 1. No obvious damage to the car, but Garcia resumed at the back of the GTLM field. Tommy Milner would sit fourth in the #4 car ahead of the Risi Ferrari in fifth.

The #25 Team RLL BMW spent time in its pit having run over debris and damaged an oil line but was back out having lost 14 laps.

Marco Mapelli leads at the quarter-race mark in the #44 Magnus GRT Lamborghini having pushed on and benefitted from the caution periods, from Jeff Westphal, the WeatherTech Racing/ Scuderia Corsa Ferrari having toughed it back into contention after heavy lifting from Alessandro Balzan and Toni Vilander. 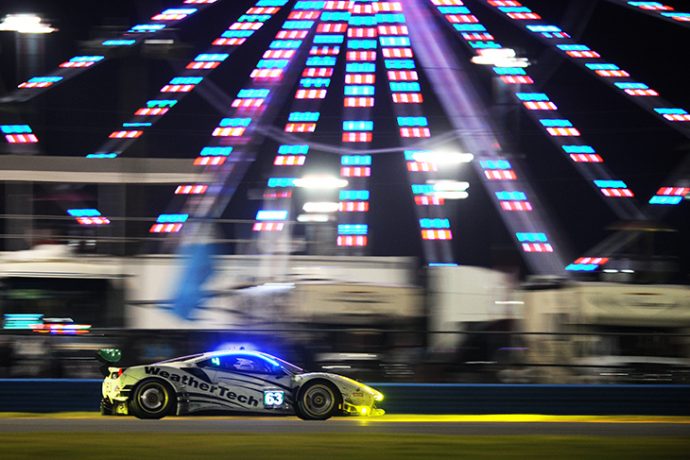 Behind, lurking with intent was the #48 Paul Miller Racing Huracan in the hands of Madison Snow.

The Ferrari was coming back as the race wore on as Toni Vilander explained: “With the cool temperature I am more confident and we are more consistent,” said Vilander, “ The opening stints were a bit shocking. I made a small mistake at the end of my stint having to cut to the grass to avoid a Corvette, but now we are back on pace, but it’s still too early to make any real judgement.”

Heart of Racing’s Aston Martin was the first GTD casualty, Alex Riberas collecting the #47 Precision Performance Lamborghini as both cars headed for the pit entrance. Frontal damage for the Aston Martin was terminal, Riberas thankfully unhurt.  The Lamborghini was able to make it to the pits with right rear damage. The incident triggered the first full-course caution, nearly five hours into the race.

Under yellow, the leading Pfaff Motorsports Porsche had misjudged the situation, Lars Kern mistakenly taking a wave by and losing track position as he slows to make amends. The #9 car that had looked so strong was now running down the order, though still on the lead lap.

Aston Martin has not had much luck. The #98 car that had risen through the order following some impressive work early on from Ross Gunn, got a light touch on the pit straight by the #3 Corvette of Nick Catsburg, which was enough to pitch Pedro Lamy into a spin into Turn 1, the car rejoining, pitting for attention but then understeering into a hit with the wall on pit exit

The car would go behind the wall after completing a smokey lap, GTD proving to be a somewhat troubled class.

Also in trouble with as yet unexplained electrical or mechanical woes was the #11 GRT Huracan, the car spending an extended period in the garage but rejoining at the end of the hour.