The #10 Wayne Taylor Racing Cadillac DPi-V.R. of Ryan Briscoe, Scott Dixon, Rengar Van Der Zande, and Kamui Kobayashi recovered from multiple penalties and technical gremlins to win the team’s second Rolex 24 in as many years, setting a new distance record of 2,965.48 miles along the way.

The #10 Cadillac was penalized twice throughout the race, once for speeding in the pit lane and once for running the red light on pit exit. Both occasions dropped the car down the order and off the lead lap.

The race-defining drive ended up being Ryan Briscoe’s stint on Sunday morning. He inherited the car in the lead and handed the car over in the lead, but his stint was not without drama.

After being sent to the pit lane for a stop and hold of sixty-seconds, Briscoe began a charge through the field. On-track passes combined with a quick pit stop that helped slingshot the #10 Cadillac to the lead of the race.

From there, Kobayashi, who has now won both of the Rolex 24 races he has competed in, brought the car home with a two-hour stint that saw the Le Mans winner cross the line 65.426 seconds clear of the next best DPi.

Cadillac has now won every Rolex 24 in the current DPi era.

Coming home in second was the #77 Mazda RT24-P. is the first time since 2012 that a Mazda has finished the Rolex 24, but undoubtedly this finish will still be one step away from where the team wanted to be at the conclusion of this year’s race.

Rounding out the podium was a surprisingly good result for the #5 Mustang Sampling JDC-Miller Motorsports Cadillac DPi-V.R. It was hard to tell what this lineup of Sebastian Bourdais, Loic Duval, and Joao Barbosa would do this year with the JDC-Miller outfit.

To come in front of both Acura Team Penske entries, a Mazda, and the reigning series’ champions is a result that the team should be proud of. Particularly for the JDC-Miller Motorsports group whose #85 Cadillac DPi-V.R. finished in the top five. 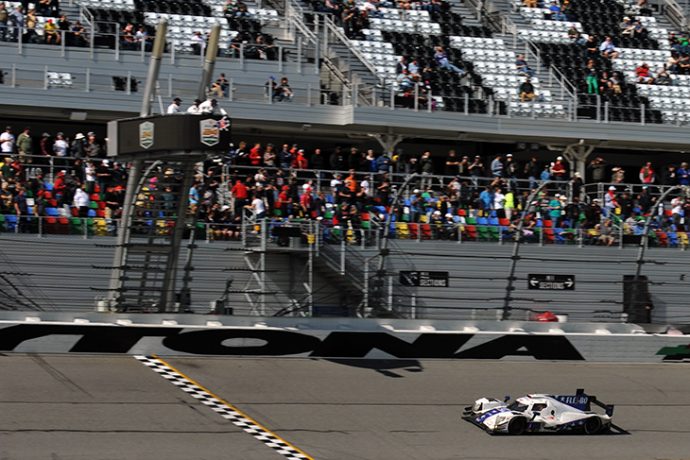 DragonSpeed also repeated their 2019 victory in LMP2. The #81 DragonSpeed ORECA 07 won a war of attrition in the pro-am class. By staying out of trouble and keeping their nose clean, Ben Hanley, Henrik Hedman, Colin Braun, and Harrison Newey won the class.

For Hanley, Hedman, and Newey this is all their first win in the IMSA Weathertech Sportscar Championship. Their accomplishment has helped IMSA crown over 1,000 unique winners in its’ top series.

The #52 PR1/Mathiasen Motorsports ORECA 07 ended the race in second. They will leave Daytona feeling as if there was more in the cards for them this year. The car was the class of the field for much of the day nut contact with a wall in the final hours inevitably cost the team the chance at a victory.

11 laps behind the class-winning #81 ORECA was the #18 Era Motorsports entry. Much of that gap was created by a pure difference in pace between the #18 ORECA and the top two. They largely avoided the dramas that befell other members of the class but lacked the pace needed to mount a serious challenge to either the #52 ORECA or #81 ORECA. 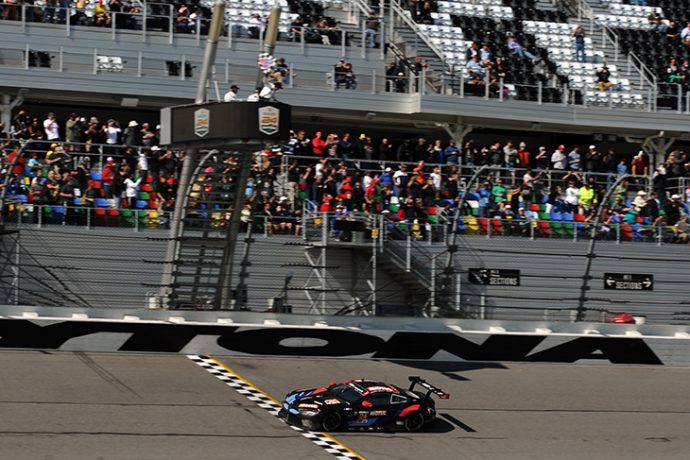 The #24 BMW M8 GTE of John Edwards, Augusto Farfus, Chaz Mostert and Jesse Krohn steadily rose to contention where the Porsche GT Team had looked stronger and quietly in control of the pace earlier on. A robust and hard-fought victory took the fight to the Porsches, which led 1-2 throughout the first quarter of the race, the black liveried M8 GTE showing at the front from the sixth hour, mixing it with the Porsches through the night.

Warmer conditions on Sunday morning looked to swing things back in the Porsches’ favour, but strong pace from John Edwards and Jesse Krohn and better tyre strategy when it mattered enabled the #24 crew to get the edge on the 911 RSR-19 through many hard-fought battles for position.

The #912 car of Laurens Vanthoor, Earl Bamber and Matthieu Jaminet took second place, nearly 14 seconds adrift of the winning BMW, the #911 sister car of Nick Tandy, Matt Campbell and Frederic Makowiecki a very close third in a team battle that went down to the wire. Despite dominant pace all week and talk of having pace in hand, the Porsche 911 RSR-19 fell just short.

Congratulations have to go to Corvette Racing, its all-new Chevrolet Corvette C8.R just shy of a podium with the #3 car of Antonio Garcia, Jordan Taylor and Nicky Catsburg in his first drive for the team. The car was on the pace throughout the race and challenged hard at the front without notable issue in an impressive debut. 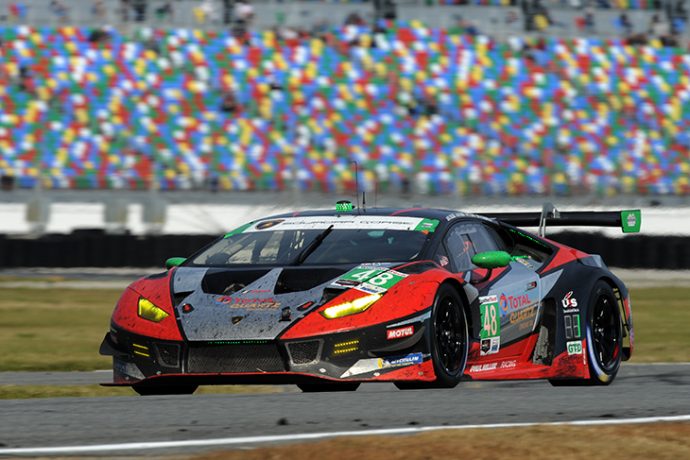 Paul Miller Racing took GTD honours for Lamborghini, the #48 Huracan GT3 Evo of Madison Snow, Bryan Sellers, Corey Lewis and Andrea Caldarelli in the GTD hunt throughout the 24 hours, even though the closely matched field regularly cycled its leaders.

Marco Mapelli, Spencer Pumpelly Andy Lally and John Potter made it a Lamborghini 1-2, their #44 GRT Magnus Huracan in the fight throughout and close to the win until the final two hours when better pit strategy put the Paul Miller Car in front.

WRT Speedstar Audi Sport finished a strong third, reward for a strong performance all week. The crew of Mirko Bortolotti, Rolf Ineichen, Daniel Morad and Dries Vanthoor hardly put a foot wrong during the race in a strong ascent through the field for the #88 R8 LMS GT3.