The #10 Wayne Taylor Racing Cadillac DPi-V.R. has had a series of highs and lows in the last three hours.

From a penalty for blowing by the red light on pit exit to a green flag pit stop that leapfrogged the car back into the lead, the #10 Cadillac has seen it all and have shown why they appear to be the favourite for the win going into the final three hours.

Ryan Briscoe was issued a stop and hold for sixty-seconds after he exited the pit lane when the red light was on. This dropped him off the lead lap. They would get that lap back courtesy of the wave by.

A quick pitstop from the Wayne Taylor Racing crew helped the #10 Cadillac get by the #5 Mustang Sampling JDC-Miller Motorsports Cadillac DPi-V.R. and take the lead of the race – the completion of yet another fight-back after a penalty for the #10 Cadillac.

22.610 seconds behind the #10 Cadillac is the #77 Mazda RT24-P. After struggling for pace in the night, the Mazdas have begun to move back up the order and are looking to give the #10 Cadillac a fight for the race victory.

Sebastian Bourdais has the #5 Cadillac in third. It led the race after the #10 Cadillac’s penalty but was unable to find the pace that helped them hold onto the lead throughout the night. 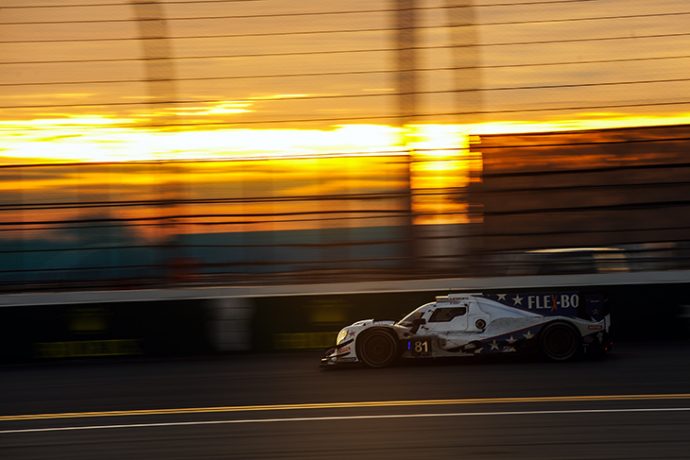 A flurry of Full-Course Yellows, however, has presented the opportunity for the #52 ORECA to begin clawing back some of the time they lost when they made repairs to the car in the pit lane.

By virtue of the Full-Course Yellows, the #52 ORECA and #81 ORECA are now in a position where they are exchanging the lead as their different fuel stints play out.

The #81 ORECA has the advantage, though; when the #52 ORECA makes their pitstop, they fall a lap down as opposed to the #81 ORECA which only falls a dozen seconds behind the #52 ORECA when they make their stop.

Colin Braun in the #81 ORECA currently has a one-lap lead on the #52 ORECA.

With still three hours to run and Full-Course Yellows more likely than not, the LMP2 fight could finally deliver on the door-to-door racing we have yet to see in the class.

With 18 hours and 11 minutes of the race run a Full Course Yellow was given due to Felipe Fraga’s #74 Mercedes seizing up in a cloud of smoke on approach to the International Horseshoe. The car had just rejoined having been pushed into its pit. This ended the longest green flag distance ever recorded at the 24 Hours of Daytona: 280 laps, or 7 hours and 48 minutes, exceeding the previous distance record of 245 laps set in 2018. 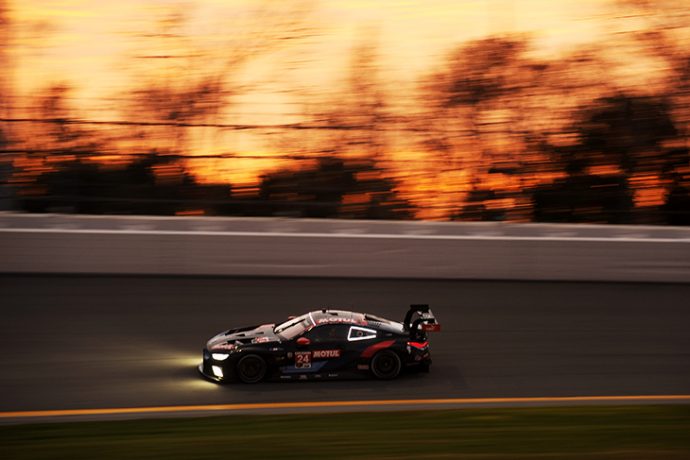 An hour later, Christina Nielsen brought a very fiery Lamborghini Huracan to a halt at the start of the high banking having straight-lined the car, which was on an out-lap, to put the car out of harm’s way and avoid cars at the Bus Stop. Safely and calmly out of the cockpit, this ended a fairly troubled run for the #19 GEAR Racing Huracan and brought out the yellows again.

The #24 BMW crew seized the opportunity to leap-frog the #911 car in the pits to split the leading Porsches, Antonio Farfus emerging in second. Nicky Catsburg’s stop for fuel and tyres in the #3 Corvette tucked the car in behind as the #62 Risi Ferrari found itself back on the lead lap in fifth.

Battle joined at the green flag as John Edwards passed Jaminet’s #912 Porsche for the lead into Turn 1, trading paint as the French driver fought back throughout the infield.

Jaminet posted the #912 car’s best lap, 1:42.546, Edwards responding, 1:42.298 the M8 GTE’s best. The pace of the 911 RSR-19s was being squarely challenged, but Jaminet got track position at the infield Kink to re-take the lead, the BMW soon into the clutches of Makowiecki. Comments had been made about BoP, but here it seemed to be well judged as Nicky Catsburg’s #3 Corvette took the fight to Makowiecki’s third-placed Porsche.

Edwards re-took the lead in style, straight-line speed out-dragging Jaminet along the pit straight, making Turn 1 ahead of the Porsche, which was then held up by the GRT Magnus Lamborghini being lapped in the infield.

Having made it back into the race after 8 hours fixing a huge oil leak, Tommy Milner hit the pit wall which meant the car was back into its garage again. It re-emerged half-way through Hour 21, diverse experience of the new car being harvested from its two entries.

Side-by-side through the infield, Dries Vanthoor got the run on Corey Lewis to pass the Lamborghini into the International Horseshoe and put the #88 WRT Speedstar Audi Sport R8 LMS into the GTD lead as the whole race seemed to come alive again. With the #44 GRT Magnus Lamborghini and the #16 Wright Racing Porsche in tow, just seventeen seconds covered the class leaders until the FCY at the 19 hours mark shuffled the order again in the pits. 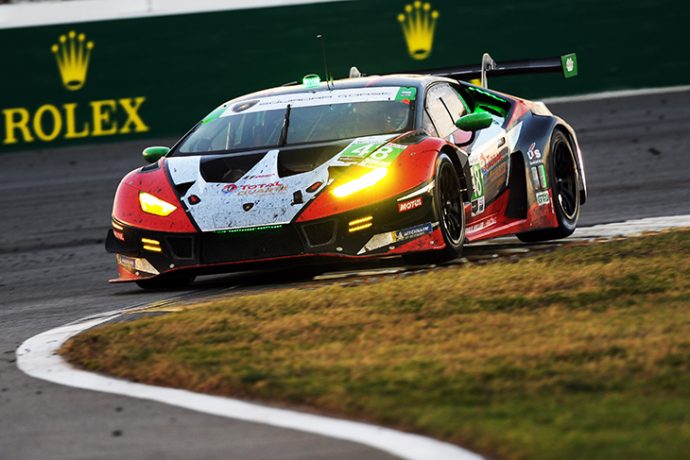 The GTD field at this point had two competitive factions: three cars on the lead lap, headed by the #44 GRT Magnus Huracan again, and four cars a lap behind. Further Lamborghini drama occurred though as the Jonathan Hoggard driven #47 Precision Performance entry ground to a halt at the infield. The car had been running tenth in class and brought out the sixth FCY of the race and shuffled the field again.

The #48 Paul Miller Racing Lamborghini was leading again the end of the Hour 21, Bryan Sellers back in control, now with the Audi six seconds behind. Dries Vanthoor was on a typical charge, setting the WRT Speedstar car’s fastest lap of 1:45.202. The GRT Magnus Huracan and Wright Racing’s Porsche was joined by the #54 Black Swan Racing Porsche, which had been hauled steadily through the order from the back of the field following its rebuild, the last car on the lead lap, Jeroen Bleekemolen had done much of the heavy lifting.