While there’s no track action today at Bathurst, the fans did have a reason to spend some time outside in the sunshine.

The majority of the 39 cars entered in this year’s 12 Hour headed to the Bathurst town centre today for the second annual ‘Track to Town’ road run. 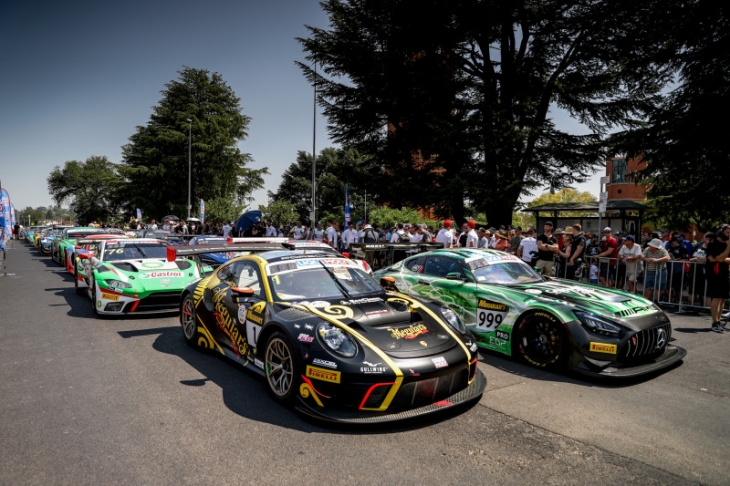 The cars parked up on Russel Street, in front of the Town Hall, giving the crowd on hand a chance to see the cars running on public roads, and see the stellar driving talent and machinery in this race up close.

“It’s a cool, cool thing,” commented Earl Bamber Motorsport driver Laurens Vanthoor. “It’s always a good idea to get close to the fans and the people.”

Head downtown with us for a look at @Bathurst12hour‘s record GT3 entry.

“I liked [the track walk] because Craig was there. I think it’s not too bad to listen to what he has to say around this place. [Lowndes] can help us learn the track a bit more we can help him learn the car a bit more.”

Is this Bentley’s year?

Bentley has been trying to win this race for a number of years now and has come close on more than one occasion. Back for a second year at Bathurst with a pair of current-gen Continental GT3s, the M-Sport team has the overall victory in his sights.

The team’s line-up has a fresh look to it for this year too, with only Maxime Soulet, Jordan Pepper and Jules Gounon returning from last year. Alex Buncombe, Oliver Jarvis, and Seb Morris are in for this one, with newly-named Bentley factory driver Morris keen to make an impression in his first 12 Hour.

“I’m pleased to be joining the team full time. There’s a great atmosphere with the drivers, I’m confident they’ll help me get up to speed in my first time here.

“In terms of BoP it looks ok. Bentley has learned so much in the past few years. It’s a strong car, but I’ll be driving conservatively in my first race.

“To prepare I’ve done an hour or so of sim work and watched plenty of onboard but personally I like to just come and get a feel myself. I should get a fair bit of time behind the wheel before qualifying, so I should be ok.”

For the first time ever, a new GT3 car is making its Bathurst debut in its first year of competition. Mercedes has homologated its 2020-spec AMG GT3 early, meaning it’ll race at Bathurst this weekend. 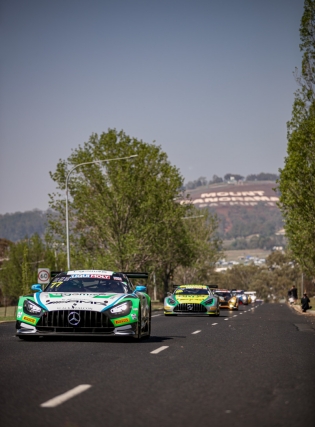 One of the drivers who will race one of the new AMG GT3s is Maro Engel. He will be driving the #77 Craft-Bamboo Racing Black Falcon example with Yelmer Buurman and Luca Stolz.

Engel is confident that the car will perform well in what is always an extremely punishing event.

“It’s fantastic for us to be able to race the new AMG GT3 here. I have to say a big thank you to everyone who got the homologation process completed in time. This is the first time it’s been done. It’s a massive effort from Mercedes, SRO and the FIA.

“We’ve done a strong test programme with it, but as a driver the first real race in a new car is always something special, I’m excited. We have strong a strong team here.

“The new car is more of an evolution than revolution. We’ve had a great car with the previous generation AMG GT3, we had a strong base to work with and looked at all aspects that could be refined. The cooling is a big issue here with the temperatures we see here, and that’s been refined, so that’ll be big for us in the race. ABS and Traction Control too has been improved, as have the front splitter and rear wing. It’s easier to make adjustments with this car, and repair it if it gets damaged.”

Another car making its Bathurst debut this weekend is the current-spec Audi R8 LMS GT3. Dries Vanthoor, who is in the #2 Audi Sport Team Valvoline Audi, told DSC that he feels the car is more than capable of scoring Audi its fourth victory in the event.

“It’s definitely a better car than the old car, it should have a good showing here, as the old car always ran well on the mountain. We just need to battle the heat with it here, stay hydrated. We will only do hour-long stints.”

Thoughts on the entry

This year’s event sees just six cars outside of the GT3-based Class A, marking the smallest supplementary field since the beginning of the GT3 era at Bathurst. 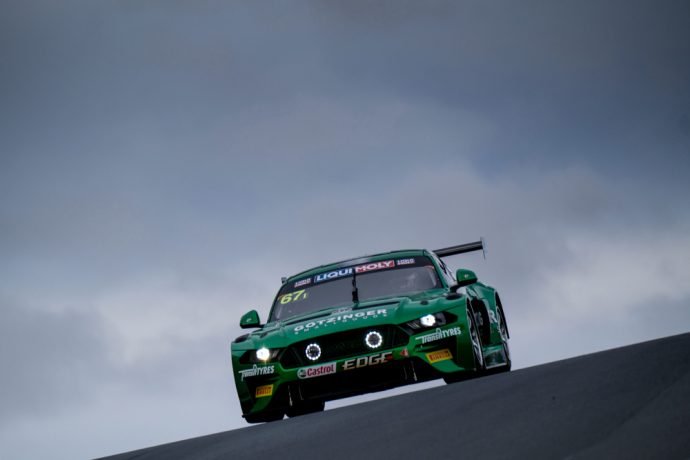 “For us, purely as pro drivers it’s not negative, because there’s less traffic and issues on the hill, which makes life easier for us,” Vanthoor said. “In the past, it used to be part of the race and the nature of the race. At one point a couple of years ago, it was maybe a little bit too much for the number of pro cars we would have; it started to be dangerous. But they still need to be there.”

“It is good to have those other cars to make it feel bigger, and also gives a lot of other people to have shot the race in their own class or their own goals. It is an expensive process to run one of these [GT3] so for some local people that might not be in that range, but can still jump in a Cup car or a GT4 or MARC car and still get in the race which is I think important.”

Geoff Emery, current Australian GT Champion and Endurance Cup Champion makes his return to the Bathurst 12 Hour for the first time since 2011 where he drove a Mosler MT900, the first year that GT3’s were permitted.

“The professionalism has gone tenfold in this race! When I first started back then (2008) we were doing it in production cars. Have a look at the field now; you’re running full-blown GT3 cars with factory drivers all over the place.”

Emery is driving alongside Australian GT regulars Tony Bates and Max Twigg, with the fourth driver of Dylan O’Keeffe, who ran in TCR Australia last year. The Bathurst 12 Hour dispenses points to Australian GT entrants for the Endurance Cup, which Emery, Bates and Twigg compete in separately.

“It was probably the best way to not have them running to me at Bathurst; put them in the same car!

“There’s plenty of banter between the three of us mates, we’re just here having a good time. We don’t want to race amongst ourselves, we want to race everyone else. So it’s a matter of getting the car home at the end, so that’s our plan.”

Porsche’s five 911 GT3 Rs took part in a photoshoot at the track this afternoon following the ‘Track to Town’ activities. It’s a record number of GT3 cars in the race for the German marque this year, which is looking to defend its maiden overall victory in the race last year. 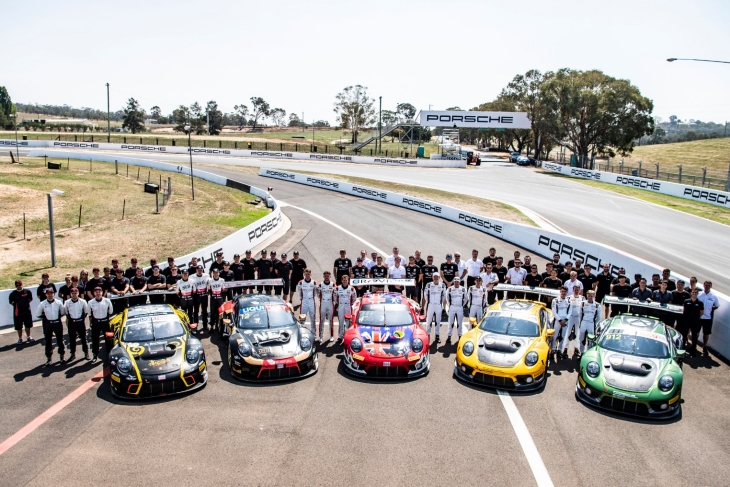 Photos courtesy of IGTC and Porsche