John Andretti, nephew of Mario Andretti, has died at the age of 56 after a long and brave battle with colon cancer.

A long career was spent in a wide variety of racing disciplines including IndyCar, NASCAR and even NHRA Top Fuel drag racing.  He raced in sportscars too, with significant successes on his cv, most particularly an overall win at the 1989 Daytona 24 Hours when he shared the Miller High Life/BF Goodrich Porsche 962 with Derek Bell and Bob Wollek.

The previous year he had shared a factory Porche at Le Mans with Mario and Michael, finishing a fighting sixth overall. 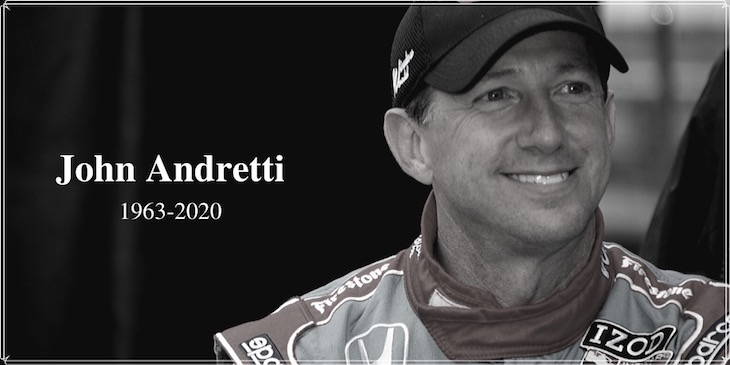 “It’s with the heaviest of hearts we share that John Andretti has today lost his battle with cancer. John was a loving husband and father, a devoted son and a trusted cousin. He was a philanthropist, an advocate for the sport, a dedicated teammate, a driven competitor and most importantly a dear friend.

“Through Race4Riley, John spent decades dedicating his time and fundraising attention to Riley Hospital for Children.   “When first diagnosed with colon cancer in 2017, John vowed to fight back and use his voice to help spread the word of prevention and early detection.   “He fought hard and stole back days the disease vowed to take away. He helped countless others undergo proper screening, and in doing so, saved lives.

“We will forever carry with us John’s genuine spirit of helping others first and himself second. Our prayers today are with Nancy, Jarett, Olivia and Amelia, with our entire family, and with fans worldwide. We urge all our followers to, please, #CheckIt4Andretti.

IMSA President John Doonan added:  “We are devastated by the news that our dear friend, John Andretti, has passed away.   “John was an extremely talented IMSA racer, as his 1989 Rolex 24 victory and three other victories will attest. But he was one of the most versatile racers ever, winning races in IndyCar and NASCAR and reaching the pinnacle of top fuel drag racing as well.   “Our thoughts and prayers are with John’s family, friends and many colleagues, and he will be missed by many throughout our motorsports community.”

Amongst John Andretti’s many achievements he became the first-ever driver to start both the Indianapolis 500 and the NASCAR Coca Cola 600 on the same day in 1994.  DSC sends our condolences to the entire Andretti family, and to John’s countless friends within the sport and far beyond