Dries Vanthoor has put the #2 Audi Sport Team Valvoline R8 to the top of the final practice session ahead of qualifying, setting a 2:03.4430, the fastest time of the weekend.

The Audi eclipsed the lap time of Marco Mapelli in the #63 Orange 1 FFF Lamborghini Huracan, who set a 2:03.5490 within the first 15 minutes of running. The remainder of the field were closely packed, with third through to 19th covered by just over a second.

A flurry of quick laps at the beginning of the session came after a significant delay to the start. A 25-minute red flag kicked off the session due to a mob of kangaroos on Mountain Straight, to ensure the safety of the animals and the cars.

The kangaroos took their time to exit the circuit; one of them making it all the way to the Esses before leaping over the concrete. (Unfortunately, its lap time was deleted for a kerb hop infringement!) 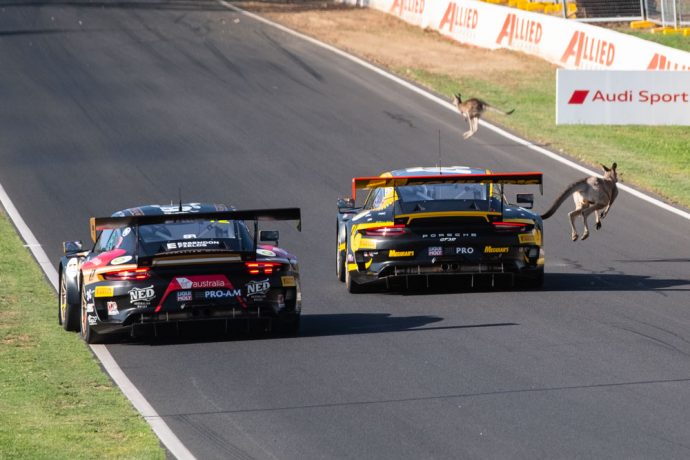 The top Pro-Am lap was set by Ben Barker in the #4 Grove Racing Porsche, which finished the session in 4th position, while Cameron McConville piloted the #6 Wall Racing Lamborghini to the top Silver class time, in 17th. Nick Percat again took the #91 Racer Industries MARC II to the top of the Invitational class, while GT4 went back the way of BMW with the RHC Jorgensen-Storm M4 leading the class.

Vanthoor was one of the few to complete a qualifying simulation, with a pair of incidents bringing out a red flag to end the session 5 minutes early. Oliver Jarvis in the #8 Bentley Team M-Sport Continental had a peculiar incident at The Chase, making a heavy impact with the tyre barrier on corner exit. The car appeared to not brake at the end of Conrod Straight, forcing Jarvis to shoot across the corner and into the gravel in an attempt to slow the car.

Separate incidents have brought FP5 to an early end. Oliver Jarvis’ Bentley and Daniel Serra’s Ferrari are both a little shorter than at the start of the session…#IntGTC | #B12Hr 🇦🇺 pic.twitter.com/eClukvYEuB

At the top of the mountain, the #27 Hub Auto Corse Ferrari with Daniel Serra at the wheel had a huge incident at McPhillamy. The car twitched at peak load in the middle of the corner, pitching the car to the right, making contact with the concrete as the red flag for the #8 Bentley’s incident was shown.

Both cars have had significant damage, and there will be question marks over whether either car will be repaired for Qualifying, or indeed the race.

There were also problems for the #24 Bostik Audi and the #159 Garage 59 Aston Martin, who each spent over 30 minutes in the garage throughout the session. As of yet, there has been no indication on what the issues are from either team.

With the delay to the start of the session, teams have a tighter turnaround ahead of qualifying, which starts at 12:40 Local time.

Qualifying 1 will see all classes take to the track for 45 minutes, before a second session only for Class A machinery.

Action from qualifying will be streamed live on the Bathurst 12 Hour website for international viewers, as well as on Kayo Sports in Australia, with TV coverage on Fox 506 within Australia.