Chaz Mostert, one of the highest-profile names in the Virgin Australia Supercars Championship, returns to Bathurst this weekend as a BMW factory driver with Walkenhorst Motorsport, alongside Augusto Farfus and Nicky Catsburg.

While Mostert’s exploits are well known in Australia, winning the 2014 Bathurst 1000 with Ford Performance Racing (now Tickford Racing) and being one of the top drivers in the field, his recent performances in GT machinery for BMW is attracting attention from around the world.

His performance at last week’s Rolex 24 at Daytona was part of a GTLM class-winning outfit; the #24 BMW M8 GTLM prevailing over the pair of Porsche 911 RSRs in the latter stages of the race. Chaz, driving with Augusto Farfus, Jesse Krohn and John Edwards scored BMW a second GTLM class win at the event in succession. 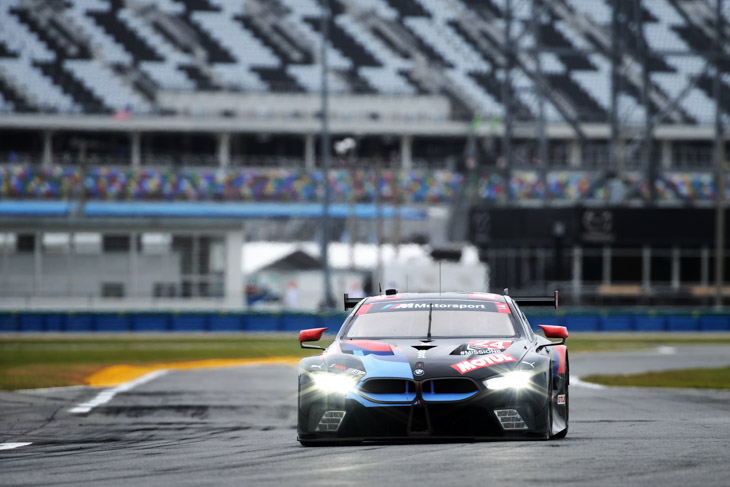 Chaz’s debut drive in GT machinery was at ‘The Mountain’, driving for the WM-Waste team run by MARC Cars Australia, in the Bathurst 12 Hour back in 2017. A lot has changed since then…

“For me, it all came about through pretty much Paul Morris,” he told DSC. “He was running the car and the team and putting the program together for that race. A lot of these GT guys generally like to get the factory support and push their drivers forward. But Paul was really in my corner, and he wanted me to drive the car.”

The WM-Waste team was running in the Amateur class in 2017, with Max Twigg and Morgan Haber completing the driver line-up. Paul Morris, a former V8 Supercars driver, was co-driver with Mostert in that 2014 Bathurst 1000, and has since become a driver mentor supporting a number of up and coming drivers in Australia’s motorsport ladder. His partnership with MARC Cars Australia was instrumental in giving Chaz the platform to perform.

“I’m very grateful to Paul for everything he did for me for then and it’s been crazy how it’s kept moving forward since.”

The WM-Waste car was the surprise of the early stages of the 2017 race, thanks to Mostert’s heroics behind the wheel. He managed to place the car in the top 10 shoot-out, from there to second on the grid, and as sunrise peeked across the mountain, he was leading the race. 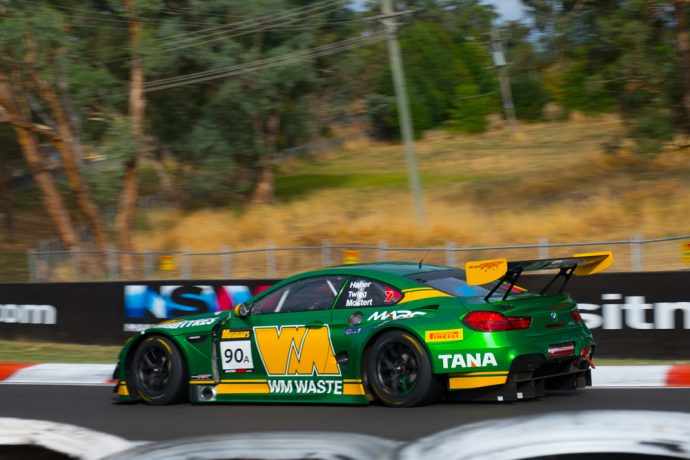 “It was an awesome experience; completely different than what I’m used to. And obviously, knowing the track, we qualified pretty well. These GT cars are a lot faster in different places around here than what a Supercar is. So that’s always a great buzz.

“But there’s maybe only one opportunity you get to drive around Bathurst when there’s no light as well. It’s really testing and challenging. It’s always an honour to start the race here, and the last couple of years I’ve been lucky enough to do that and really enjoy it.”

Unfortunately, it wasn’t to be in that edition of the race; the car breaking down just before half race distance. But Mostert had done enough to catch the eyes of BMW, and the ball began rolling.

“I went over to Germany in a small period throughout the year to go test the M6 again over there and get a bit of a baseline. We decided to put a little bit of programme together around my primary racing [the Virgin Australia Supercars Championship]… I got to race if they needed another driver for the Asian Le Mans series.

“BMW at that point had quite a lot of different series going on and they were looking for another driver to just do some part-time racing. So I got together with Jesse Krohn and Jun-San [Chen] over there and did some racing in the Asian Le Mans series! It was an awesome opportunity to be able to tick some other tracks off my bucket list.”

Chaz was placed with Fist Team AAI in the #91 BMW M6 GT3, and raced the first three races of the season, taking two wins and a second-place on the way to a GT championship victory for the car. He was also given an opportunity to race at Macau with the team in the FIA GT3 World Cup, finishing fifth after keeping his nose clean in an incident marred qualifying race. 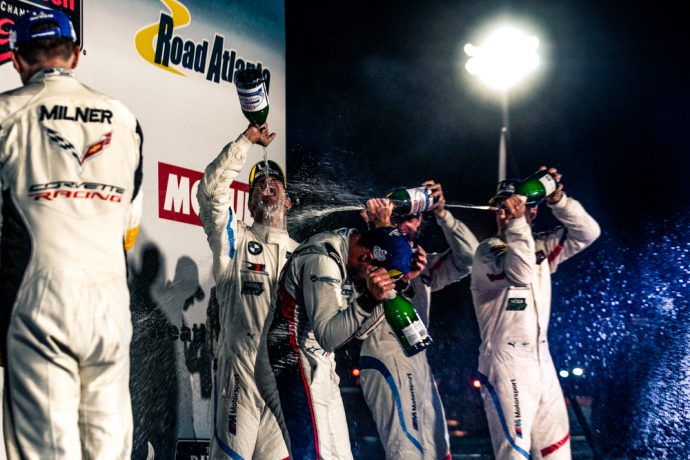 “It’s been a bit of a stepping stone and the good thing about it is, first of all, doing all these races is awesome. Macau – pretty lucky to finish fifth. There was a big crash earlier in the qualifying race, which probably made us finish a bit further forward but to have that opportunity was awesome.

“Then there was an opportunity; you’ve got these factory BMW drivers that have full programmes put together ready and then you’ve got a race in IMSA where it’s a bit like our Endurance Championship where they might need a co-driver or an extra driver which hasn’t got a full programme.

“So I think I’ve been lucky to be in that spot with BMW where I can do all these extra events and go to Road Atlanta, and race in the States for the first time other than the Supercars round we did in the States [at COTA in 2014] was, for that style of racing, absolutely mind-blowing and I really enjoyed it!

“Things have been progressing well in American Racing in there for the GT Le Mans for BMW as part of the IMSA championship so I really enjoy that side thing and then it’s all gone from there.”

His running with the IMSA team, BMW Team RLL, continued with an attempt at the Rolex 24 at Daytona in 2019, where the car suffered electrical problems and finished well down the field. A return 12 months on saw a much better result, with the BMW M8 taking a class victory.

“I’m too scared to put the Rolex on! The first attempt… we were a bit unlucky early in the race have some problems and go laps down and even though was an awesome experience it’s still a bit heartbreaking when that happens.

“This year was an absolute dream – it still hasn’t sunk in, I still can’t believe it. The whole race we’re in the mix but always, when you haven’t achieved something for so long; my biggest victory was back and 14 with 1000.

“And you’re in this prestige race in a good position to be fighting you’re always talking yourself out of it, ‘it’s not going to happen for you.’ So for it to happen is still absolutely mind-blowing.”

With BMW’s worldwide motorsport presence, there is plenty of prestigious races around the world that we could see Mostert competing in. But for the moment, his focus is firmly at home.

“Obviously when the Supercars starts, my sole focus is doing that. I’ve got Sebring coming up after this as well, that will be my last race with BMW for the year, so I’m super pumped about that and having that opportunity.

“Definitely after the weekend at Daytona, Le Mans is on my bucket list. I’d love to do that. I’d love BMW to go back too; I think they’ve got some really unfinished business to go back and race there and I’d love to be part of that programme. 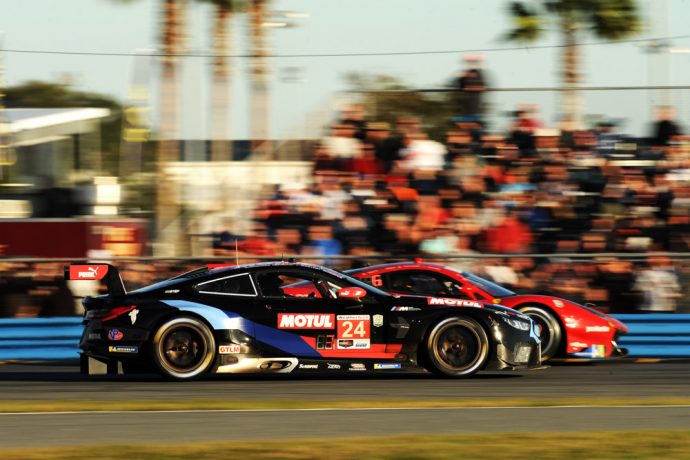 “But at the end the day, I don’t make the decision. I’m sure a lot of the drivers here all want to do these big events and it all comes down to if they want you there or not.”

During the Virgin Australia Supercars off-season, Mostert was one of the headline driver movements, crossing brand lines from Ford to Holden. After six years with the team, Mostert left Tickford Motorsports, part of the Ford factory line-up and the team with which he won the Bathurst 1000 within 2014, to join Walkinshaw Andretti United.

The Walkinshaw Andretti United partnership came together in 2018, marking the second international buy-in to a Supercars team after Team Penske joined Dick Johnson Racing in 2015. DJR Team Penske driver Scott McLaughlin has recently tried his hand at some of the other motorsports Team Penske has on offer, including a test in an IndyCar.

While Mostert hasn’t yet sampled any of Andretti or United’s machinery, the possibility has certainly crossed his mind.

“When you go over there, and you see how big the racing is, the opportunities are endless. When you go over, check out the Indycar team, an instant fire burns inside you to do something like that. But at the end of the day, you can only do what you’ve got going on.

“First of all, the most important thing for me is to do the job I have to do here in Australia, I have a lot of unfinished business in Supercars, so I’m solely focused on that. Anything else that comes would only be a bonus. I’m happy to be racing for that team here. Because I’m excited about a big year, and I’m really refreshed with the move, so I’m excited!”

I have a lot of unfinished business in Supercars

Focusing back on the event that brought his name to the international stage, the Walkenhorst Motorsport outfit suffered shipping delays due to storms at the 9 Hours of Kyalami and have had to reduce their effort to one car this weekend. And with a 20-car Pro field, Mostert is wary of the quality of the field.

“Every year it gets more and more intense and when you talk to people around the world now, they really hold this event in the last couple of years quite high in the resume.

“We’re here this weekend coming off a really good race last weekend, so we’re in a positive mindset. I got two awesome teammates [Augusto Farfus and Nicky Catsburg] and an awesome team in Walkenhorst and the backing brought by BMW. I think we have a good opportunity for this weekend.”