“I went back down the single-seater route in 2019 having competed in F4, the MRF F2000 Challenge, winning it in 2016-17, then F3 before winning the 2017-18 Asian Le Mans Series, European Le Mans Series in 2018 as well as the Le Mans 24 Hours, and Asia again in 2018-19, finishing second. I had a really good opportunity with Honda and Red Bull to go out and race in Japan in Super Formula which was a great experience. The cars are ridiculously fast and are about 4secs quicker than an LMP1 sports-prototype around Fuji so it’s a really ‘grown-up’ car. 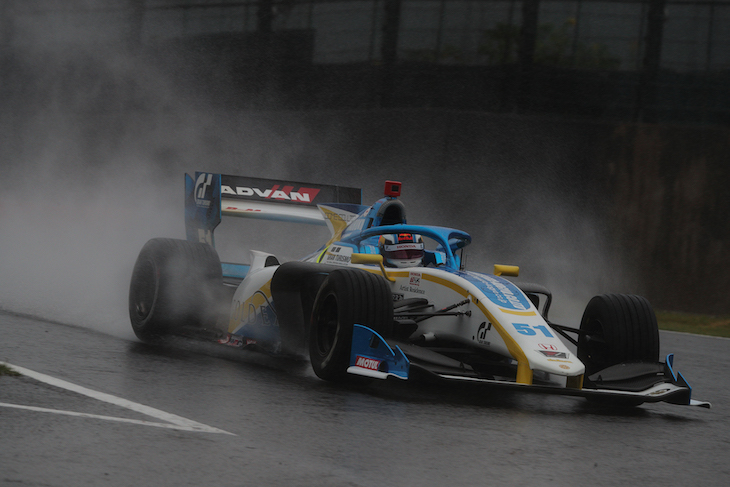 “I really enjoyed myself living out in Japan and importantly learned a lot from driving but also personal skills and dealing with a completely different, but great, culture. It’s a tough championship, especially for a new team and a ‘rookie’ driver, but I scored a podium finish and a couple of other good results which was great. It was an enjoyable year. I also did some GT3 racing out there in the Super Taikyu Championship, in the ST-X category, which included the Fuji 24 Hours, and all was good fun.

“I actually did a sports-prototype race last year due to some unfortunate circumstances for Jack Manchester when I stepped in to replace him in the Carlin LMP2 car for the European Le Mans Series race at Silverstone after Jack suffered an accident. I was also invited by G-Drive to the ‘Rookie Test’ in Bahrain after the WEC race and I ultimately drove the Racing Team Netherland Oreca. I always enjoy driving an LMP2 car but the test was a bit up and down due to the weather.

“The day began with some very uncharacteristic heavy rain so that wrote off the morning with the car not running at all. Thankfully in the afternoon, the sun was back out but the track was strange as the grip from the previous day’s race had all been washed away. Despite the track conditions, it was still good to drive and the test went well.

“I had never done Daytona before, but had watched it on TV. The deal to race with DragonSpeed USA was fairly last minute. Elton [Julian, Team Principal] called me having asked Christian [Horner, Team Principal Red Bull Racing] for my contact details. It was actually the weekend of Bahrain that he got in touch and within about a day we had agreed everything. My first experience of the team at the ROAR was fantastic, they’re a great bunch of guys. Engineer Paul [Thomas] is really switched on while Elton is a good guy to work with. Henrik [Hedman] is obviously with us and he has been there since day one with
DragonSpeed, a fantastic guy.

“Doing the track walk was strange as it’s so difficult to walk up the banking. It’s actually very technical and is quite bumpy in places. It was a lot more technical that what I thought it was going to be but actually a very enjoyable track to drive. The first time I went around the banking the car was so heavily loaded, so twitchy with it just on the bump rubbers, so it’s got no suspension left and yeah, it’s just all over the place. I was like ‘jeez, this is strange’ but three laps in, you get completely used to it. It’s a strange sensation because the car tips sideways and rather than looking around the corner, you are looking up, so you are just looking up at the windshield but you can’t see that far because of the sun visor. It’s fun but quite weird.

“The [bus-stop] chicane’s a great corner, ultra-quick, especially when the rubber goes down. There were a lot of tricks and bits to get used to. I remember Harry Tincknell saying to me when he first raced at Daytona that he came away from the ROAR thinking ‘I am a couple of tenths off here and I don’t know why’ and then he said he went back for the race and was on the pace straight away. So it’s a few things that you don’t know that others, especially the American guys and the IMSA regulars, just know every little nuance of the track and that just picks them up a tenth or two in a couple of places.

“Ben [Hanley] was massively quick in the ROAR, and like myself, we had another ‘newbie’ in Colin [Braun] who’s definitely not a ‘newbie’ to Daytona – I think this was his 16th so was an important guy for me to learn off. He has so much Daytona experience so knows every little trick and was really open and didn’t hide anything. So I had a really nice bunch of guys to work with for my first Daytona.

“I have always got on well with my co-drivers and have been pretty lucky that I have had good ones. That started with Thomas Laurent and Stéphane Richelmi in Asia. I got on very well with them and went on to win the championship, then went to ELMS with Ryan Cullen and Gustavo Menezes, who again, I got on really
with. I still speak to both of them, as I do with Stéphane and Thomas, and from there I went with Andrea Pizzitola and Ate de Jong, again having a really good relationship, so it was all pretty much plain sailing. I had Viktor Shaytar and Norman Nato at Le Mans in 2018 (below), again two good guys. Viktor is a full-on legend, proper Russian. 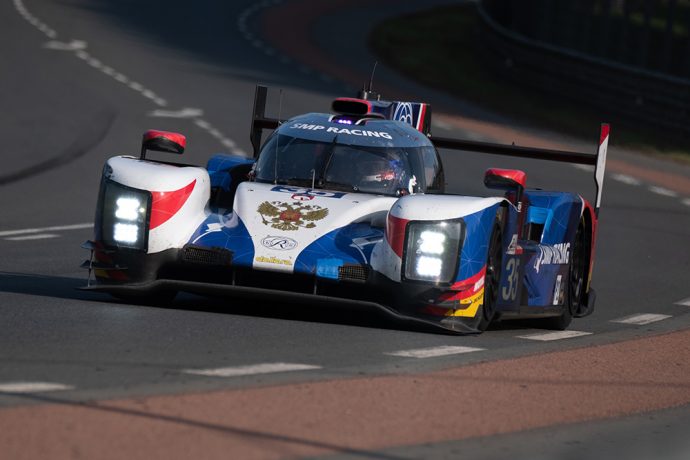 “I arrived in Daytona for the Rolex itself on Monday afternoon, flying in early to avoid jetlag, even though on-track action didn’t start until Thursday. I had a nice game of golf with Harry [Tincknell] on Tuesday morning, I obviously came out as the winner of that one! Harry and I play together quite often and it’s normally pretty even between the two of us, but I came out on top this time and then went for a little run that afternoon, chilled with Ben, and then went to the track on Wednesday. There wasn’t too much to do and we checked into our RV for the weekend, my ‘home’ for the week sharing with Ben with the other guys parked next door.

“I didn’t drive in FP1, did a couple of laps in FP2, but did most of my running in the night session which was always the plan. Henrik did a great job with qualifying and put the car second, three-tenths off the pole and a second and a half up the road from P3, so really strong. We didn’t do much running on Friday,
nothing too serious, just some ‘ins’ and ‘outs’ and some driver change and pit-stop practice.

“I knew the race would be tough as although there weren’t many cars, there were some top-class drivers. Nicolas Lapierre and Ryan Dalziel in the Starworks car, Gabriel Aubry and Simon Trummer in another car, Nic Minassian in the Era Motorsports car. So a lot of tough competition!

“But we enjoyed a clean run apart from a puncture four hours or so into the race, caused by debris, and then we had to change the car’s nose, again due to debris. Everyone kept their noses clean and we won by over two laps. I did around six stints with quite a bit of driving in the night which I enjoyed. To win what was my first race in America, at Daytona, such a legendary venue, was absolutely fantastic. We obviously went there with that ambition but knew it would be very hard to execute but we did it and in a dominant style. 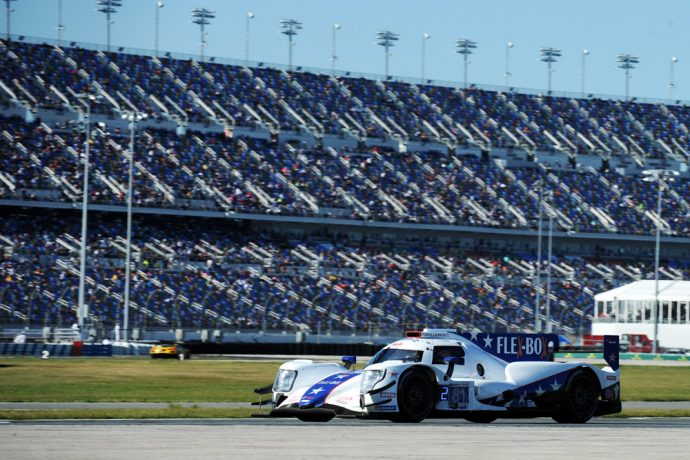 “My biggest issue happened after the race on the winners’ podium. I smashed my champagne bottle which cut my hand quite badly. I didn’t really notice the shards of glass in my hand until I wiped it on my race suit and there was blood everywhere. Then Colin and Ben both peppered me in the face with champagne,
while I was standing there with no bottle, so of course I couldn’t see anything, which they thought was funny. 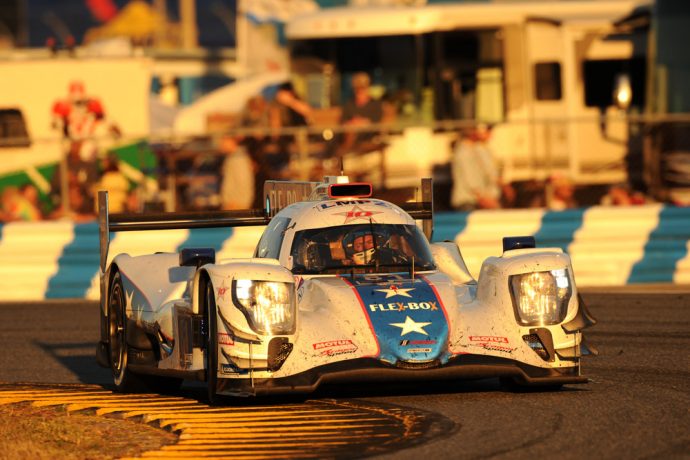 “I would love to come back to Daytona, the atmosphere was fantastic, the public gets so much access to the paddock which is really nice. It was a great way to start 2020 and hopefully leads to more drives in IMSA. Sports-prototypes is a category I just see myself being in. Endurance events are a type of racing that I
really enjoy. I love the challenge of a long race, you get so much chucked at you that you can often recover if you’ve suffered a problem. Whereas in single-seaters, one mistake at the start of the race can usually cost you for the whole race. I also like the challenge of sharing a car with team-mates. You’ve got to set-up the car which suits all of you which is nice. You get a relationship with them which you don’t get when you race in single-seaters, it’s more of a team environment in terms of the mechanics playing such a big role with pit-stops during a race.

“I want to do more IMSA races this year. Hopefully, people will notice I’ve done a decent job in my first Daytona and first IMSA race. I’d love to do the likes of Sebring, Watkins Glen and Petit Le Mans. At this stage in the year, it’s likely to be seated in the Endurance series available as most of the ‘sprint’ race seats have now gone.

“Likewise I’d love to do another season of ELMS but it’s looking increasingly unlikely at this stage in the year but I am keeping my options open and let’s see if anything comes off there and then maybe get into a couple of GT races in Japan.”