Maxime Soulet heads the field of the Bathurst 12 Hour at the halfway point, with his #7 Bentley Team M-Sport Continental engaged in a battle for the lead with the #77 Craft-Bamboo Black Falcon Mercedes AMG at the hands of Maro Engel.

The pair have a 20-second gap to Ben Barnicoat in the #60 59Racing McLaren, who were the early pace-setters. Both the #7 and #77 passed the McLaren through the pit stops at around the 8-hour mark, as almost the whole field pit on the same strategy approximately an hour after the end of a Safety Car period to recover the #22 Audi Sport Team Valvoline car. The #999 GruppeM Mercedes AMG, while currently sitting in 7th place, is on an alternate strategy from the rest of the field, and has cycled to the lead by less than a second in the previous stops, however, a 15 second time penalty adjudged for the car, as well as the #911 Absolute Racing Porsche, have affected their races. 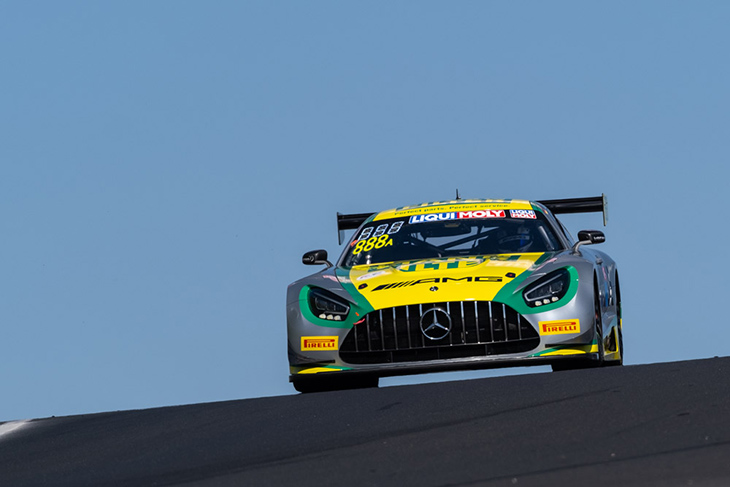 That was not the only issue for the #911; a puncture for Patrick Pilet over the top of the mountain costing the team a lap, as Pilet limped the car to the lane

There has only been one retirement since hour 3, in a so-far clean run to the middle of the race. The #24 Bostik Audi suffering an engine failure on Mountain Straight, with Max Twigg parking the car in a safe spot, allowing green-flag running to continue. That brings the total retirements in the race to 4, after early incidents for the #188 Garage 59 Aston Martin, the #6 Wall Racing Lamborghini, and the #22 Audi Sport Team Valvoline R8.

Early issues for the #20 T2 Racing MARC II and the #95 GJ Motorsport MARC II have been rectified, and both have returned to the track. The #20 repairing broken suspension on both sides of the car, while the #95 has undergone a full engine change, and are back in the race, 99 laps down. 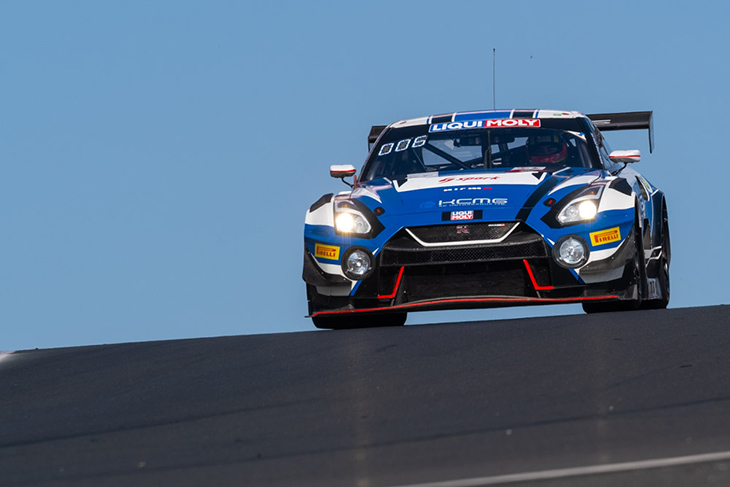 The top 5 features the #888 Triple Eight Race Engineering Mercedes AMG, and the #18 KCMG Nissan GT-R. Jamie Whincup in the #888 was involved in an incident passing traffic through Metal Grate, making contact with the rear of the #9 Hallmarc Racing Audi, pushing Marc Cini into a spin. Remarkably, the #9 only glanced the wall, and after a full 360, came to a stop in the centre of the track, off the racing line.

Caldarelli in the #63 Orange 1 FFF Lamborghini sits in 6th, ahead of the #999 GruppeM Mercedes. Alex Buncombe in the #8 Bentley Team M-Sport Continental, Craig Lowndes’ #1 Earl Bamber Motorsport Porsche, and the #222 Audi Sport Team Valvoline of Mattia Drudi complete the top 10. 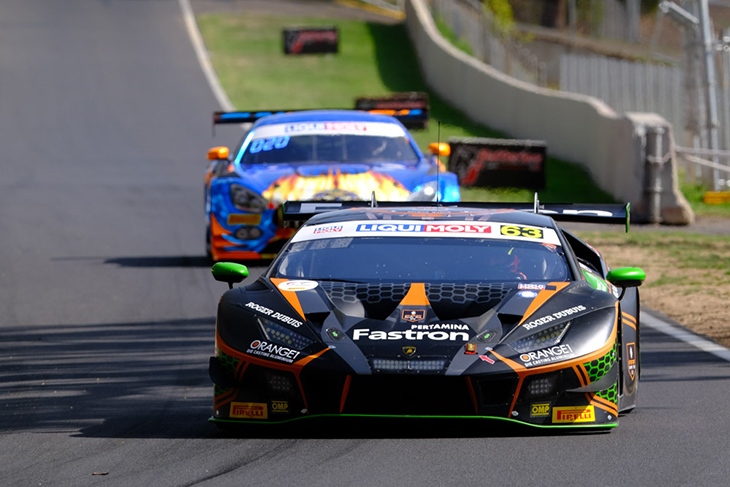 The #222 had an issue with a rear-right tyre, which delaminated at The Chase towards the end of Winkelhock’s second stint. Smoke was observed pouring out of the rear of the car after a tyre change but slowly cleared throughout the stint. The #222 is now the last of the Audi’s in the mix after the #2 was pulled into the pits with an engine rev sensor issue, just before the halfway point. The car has spent 10 minutes in the garage, effectively ending their shot at the win.

Fraser Ross in the #59 59Racing McLaren leads Silver by half a lap over the #159 Garage 59 Aston Martin. Pro-Am is currently in the hands of Dominik Baumann and the #75 SunEnergy1 Mercedes, who has been trading the lead with the #12 Earl Bamber Motorsport Porsche and the #4 Grove Racing Porsche through the pit stops.

The Invitational class is being led by the #91 Racer Industries MARC II sitting in 17th overall. They hold a 77 lap lead as the other cars in the class have suffered significant delays.

GT4 is being led by the RHC Jorgensen-Storm BMW by 13 laps after the #19 Griffith Motorsport Mercedes GT4 spent over 20 minutes in the pits.