R-Motorsport will make its GT4 European Series debut this season. The Swiss team confirmed the expansion of its GT racing programme with the announcement of the first two drivers for the 2020 season.

British drivers Seb Perez and George Gamble will race in one of R-Motorsport’s Aston Martin Vantage AMR GT4s. Both drivers taking their first steps in international GT racing this season, after several seasons in the United Kingdom, latterly in the Porsche Carrera Cup Great Britain.

He will be joined by 23-year-old George Gamble from Nottingham, who finished in third place in the Pro class of the Porsche Carrera Cup Great Britain in 2019 securing ten podium finishes in his second year in the series. Gamble made an appearance in British GT’s GT4 class in 2017 and was the nominated substitute driver in the D’Station Aston Martin Vantage GT3 at the season finale of the Asian Le Mans Series in Thailand after Ross Gunn was called up for FIA WEC duty on the same weekend.

The GT4 programme will be in addition to R-Motorsport’s Aston Martin Vantage GT3 effort in the GT World Challenge Europe Powered by AWS this season. The GT4 European Series form part of the support package of the series.

“We are very pleased to be able to extend R-Motorsport’s range of activities this season. We see this involvement in GT4 as the logical extension of our previous GT sporting activities,” explained Team Principal, Florian Kamelger.

“So, as part of our programme of development for juniors, we are now giving these two GT4 drivers a chance to perform well and show that they are ready to move up into the higher categories, such as GT3, for example.”

“With George Gamble and Seb Perez, we have signed two promising young talents, who are very keen to show just what they are capable of in GT4.”

The Silverstone circuit will host the opening round of the 2020 GT4 European Series on May 8-10.

US Pair For MDM BW

Tyler Cooke and Chandler Hull will race for MDM Motorsport in the 2020 GT4 European Series in a BMW M4 GT4. 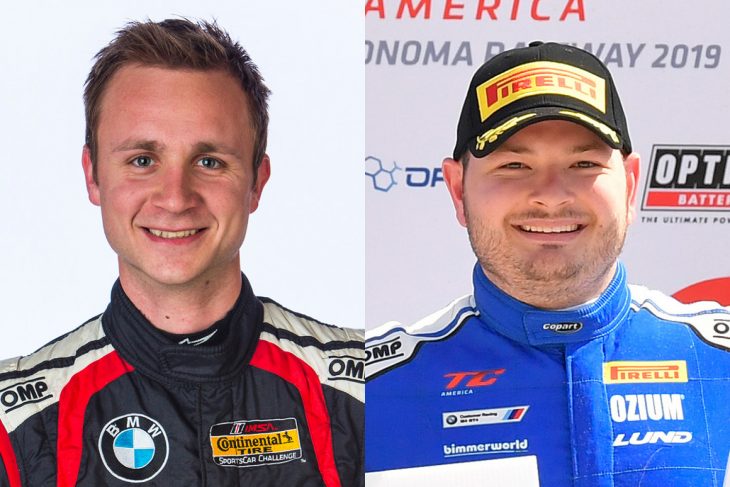 After a successful season with Alec Udell, MDM Motorsport will continue with an all-American line-up for one of its cars. Cooke and Hull join Dutch drivers Simon Knap and Daan Pijl, who was confirmed earlier this month.

Both Cooke and Hull have raced periodically in Europe, but 2020 will mark the first time both drivers will compete for overall class honours.

Cooke (25) has raced a BMW M4 GT4 before and was a race winner at Road America in 2018. After a less successful 2019 season, Cooke is hopeful that the Atlantic switch will allow him to showcase his abilities in front of the right people.

“2019 was probably a year to forget but I could not be more excited to kick start my career in Europe. Racing there has always been a dream for me and now I am turning it into reality with a championship-winning team, MDM,” said Cooke.

“The fact that I will be returning back to the BMW marque is the icing on the cake. Having finished 3rd overall in the IMSA GT4 series in 2018 with Bimmerworld it should be second nature to jump back into the seat and I’m really looking forward to keeping up MDM’s momentum from last year!”

Hull made his professional racing debut in 2019 in SRO Motorsports America’s TC America series. Driving for Bimmerworld Racing, Hull claimed third place in the championship, as well as securing the Rookie of the Year award. Over the course of the season, he captured four podiums, seven top-five finishes, as well as one pole position.