The Racers Edge Motorsports Acura NSX GT3 team of Shelby Blackstock and Trent Hindman dominated the opening weekend of the 2020 GT World Challenge America season at CoTA last weekend. The duo was the class of the new-look field for the series, which features no Pro class and just 14 cars (for the opening round).

Fast start for the NSX

Blackstock and Hindman scored a took the overall Silver category GT World Challenge America Race 1 win at Circuit of The Americas on Saturday afternoon, while GMG Racing’s James Sofronas and Jeroen Bleekemolen finished second, and first in the Pro/Am category.

Sofronas, in his #14 GMG Racing Porsche 911 GT3 R (991) took the green flag from pole to start the 90-minute contest and nosed ahead of second-on-the-grid Blackstock in the #93 Racers Edge Motorsports Acura NSX GT3. Fifth on the grid Ziad Ghandour in the #24 TR3 Racing Ferrari 488 GT3 drag raced into third and through the dramatic 133-foot climb into turn 1 moved on the inside of Sofronas while Blackstock moved on the outside. The competitors went three-wide through turn 1 – Sofronas was able to slingshot his Porsche into the lead through turn 2 with Blackstock pursuing in second, and Ghandour slotting into third. Martin Fuentes, who had started third in his #1 Squadra Corse Ferrari 488 GT3, slotted into fourth.

On lap 2, Blackstock continued to hound Sofronas and the two would go side by side through turns 2 and 3. Sofronas under pressure straight-lined through the apex of 4 to fend off the challenge and hold the lead. Behind them, Fuentes had moved around Ghandour up into third. A lap later Race Stewarts issued a directive to Sofronas to give Blackstock the lead of the race for cutting the apex the previous lap.

By lap 4 Blackstock had built a 1.8 second lead over the GMG driver, with Fuentes still pursuing in third. In the Am division, San Antonio native Fred Poordad piloting the #20 Wright Motorsports Porsche 911 GT3 R overtook Mark Issa in the #6 Vital Speed Ferrari 488 GT3 for the lead in class.

With 50 minutes remaining and the pit window open for driver changes, Blackstock held an eight-second advantage over Sofronas. The two race leaders would come into the pits last before the pit window closed. Blackstock passing the reins over to Hindman and Sofronas over to Bleekemolen. For the balance of the race, the leaders maintained their positions and at the checkered Hindman crossed the line 21 seconds ahead of Bleekemolen. Colin Braun (George Kurtz) crossed the line third overall and second in Pro/Am in the #04 DXDT Racing Mercedes-AMG GT3, while Rodrigo Baptista (Martin Fuentes) finished fourth and third in Pro/Am. In the Am category, Max Root in the #20 Wright Motorsports Porsche 911 GT3 R crossed the line a very respectable 7th overall and first in class.

“It’s a great feeling. Right at the green flag we had a good car, and this is probably the best car I have ever driven, said Blackstock. “Hats off to the Racers Edge Motorsports team and Acura.” “This is Shelby’s first GT3 race win, so congrats to him, said Hindman. “We’re really blessed with this car and crew.”

“It’s always good to start the season with a win and it’s great to have Jeroen as a teammate,” said Sofronas. “The GMG guys gave us a great car.” “we were a little short of the Acura today, but the Porsche was great, said Bleekemolen. “You can really push this car and I look forward to tomorrow.”

The Racers Edge Motorsports Acura NSX GT3 team of Shelby Blackstock and Trent Hindman then went on to control Race 2 and the Silver category on Sunday afternoon. The Squadra Corse team of Martin Fuentes and Rodrigo Baptista however, piloted their #1 Ferrari 488 GT3 across the line in second, and first in the Pro/Am category. The DXDT Racing team of George Kurtz and Colin Braun finished third and second in Pro/Am in their Mercedes-AMG GT3. 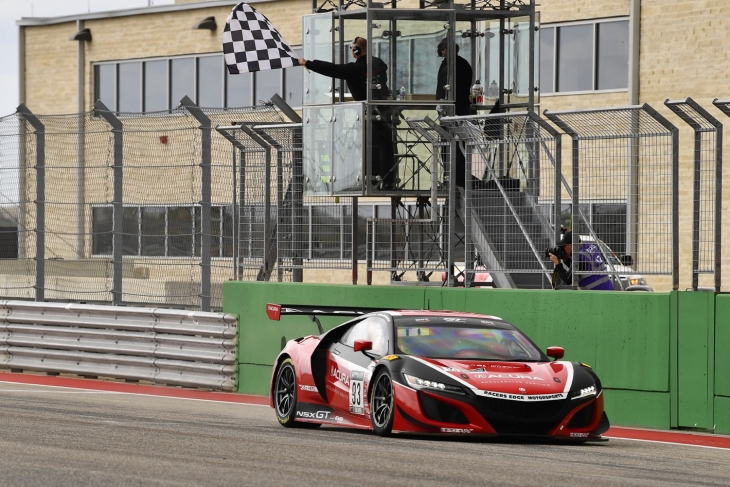 Hindman led the field to the green in his #93 Acura NSX GT3 and powered into the lead through turn 1. Rocketing up from fourth on the inside of turn 1 and into second was Kyle Marcelli in the Racers Edge Motorsports #80 Acura NSX GT3. TR3 Racing’s Matteo Cressoni slotted into third in his #31 Ferrari 488 GT3 as the field filed in behind the leaders. Alan Metni in the Park Place Motorsports #73 Porsche 911 GT3 R (991) led the Am division, 9th overall.

While the leaders up front maintained their positions, Max Root in the #20 Wright Motorsports Porsche 911 GT3 R passed for the lead in Am. Root though would come into the pits momentarily to deal with a minor mechanical issue allowing Metni to regain the Am lead.

With the pit window opening with 50 minutes left in the race, Hindman entered the pits first to pass the reins over to Blackstock. Marcelli, and Cressoni remained out on track until near the end of the pit window looking to close the over five-second gap to the leader.

With the pit window closed and all drivers cycled through, Blackstock held a 3.7-second lead over Martin Barkey who took over duties for Marcelli. San Antonio native Fred Poordad who took over for Root regained the lead in the Am division. Two full course yellows were issued in quick succession near the three-quarter mark of the race to remove disable cars on track.

On lap 33, drama ensued behind Blackstock as George Kurtz, who was running 4th in the #04 DXDT Racing Mercedes-AMG GT3, took an aggressive inside line through turn 11 and passed both Barkey and Fuentes, who was running 3rd. Running wide on the exit, Kurtz nudged back onto the track and the three drivers came together door-to-door. Barkey’s Acura encountered a cut tire and he came into the pits a lap later for repairs. Fuentes’ Ferrari was unscathed, and he powered ahead of Kurtz to slot into second. With all the action behind him, Blackstock maintained a 4.8-second lead. Poordad maintained his lead in the Am division.

At the checkered, Blackstock won by 7.7 seconds over Fuentes and Kurtz. Poordad finished 6th overall and first in Am. Results are provisional until posted final.

“You never know what’s going to happen in racing, but the pairing of Trent and I, has been a dream come true,” said Blackstock. “Racers Edge has given us a great car.”

“The race was a handful, but it was fun! I just tried to stay on the inside during that incident with the Mercedes (Kurtz), and we got the win,” said Fuentes.

“We struggled with the balance for a little bit, but Fred brought the car home and we were able to get the win,” said Root.

“I am so glad we were able to bring the win home today, it’s the first event for us, but we’ll continue to improve and keep going for the rest of the season. We’re happy with the win this weekend!” said Poordad.

The next action for GT World Challenge America teams and drivers is May 15-17 at Canadian Tire Motorsport Park.