Orange1 FFF Racing by ACM will defend its Endurance Cup title in 2020 with an unchanged line-up in its lead Lamborghini Huracan.

Andrea Caldarelli and Marco Mapelli clinched the overall Endurance title last term to complete an unprecedented clean sweep of top-tier drivers’ championships. They were joined at four of the five long-distances rounds by Dennis Lind, who was forced to miss the Barcelona finale through illness.

All three will return this year to pilot the #63 machine at the five Endurance Cup events, including the Total 24 Hours of Spa. Their GT World Challenge Europe Powered by AWS programme will run alongside the squad’s efforts in Intercontinental GT Challenge Powered by Pirelli.

FFF will also launch Silver Cup and Pro-Am bids at Endurance rounds this term. The young Silver crew will be anchored by Taylor Proto, who remains on board from 2019.

He will be joined by two series newcomers in Frenchman Florian Latorre and Belgian racer Baptiste Moulin. Both come with recent experience in Porsche machinery, with Latorre having competed in the top-tier Supercup and Moulin switching from Carrera Cup France.

The team’s Pro-Am line-up will see Phil Keen and Hiroshi Hamaguchi continue their partnership from 2019. The Anglo-Japanese pairing clinched their class championship in the Sprint Cup last term, while Hamaguchi also took GT Cup gold at the FIA Motorsport Games. They will look to add a class Endurance title at the wheel of their #19 Huracan this season.

2020 will see the German squad contest its first full campaign in the series, having made a one-off appearance at the Circuit Paul Ricard 1000kms in 2016.

The #44 car will contest the full Endurance Cup campaign with a trio of experienced gentlemen drivers, while the squad’s #20 machine will run in the Pro-Am class at selected long-distance rounds.

The Am Cup entry will feature an all-German line-up, with Christian Hook, Manuel Lauck and Florian Scholze sharing the #44 Mercedes-AMG.

Hook and Lauck both switch from Rinaldi Racing, where they formed part of the Am Cup-winning crew at last year’s Total 24 Hours of Spa.

Hook has competed in GT3 racing since 2016 and ran the full Endurance Cup schedule for the first time last year.

Lauck, meanwhile, has competed extensively for more than 15 years, including spells in FIA GT1 and Lamborghini Super Trofeo.

Their line-up will be completed by Scholze, who made his Endurance Cup debut in 2018 and last year clinched the Sprint Cup title in the Am class. 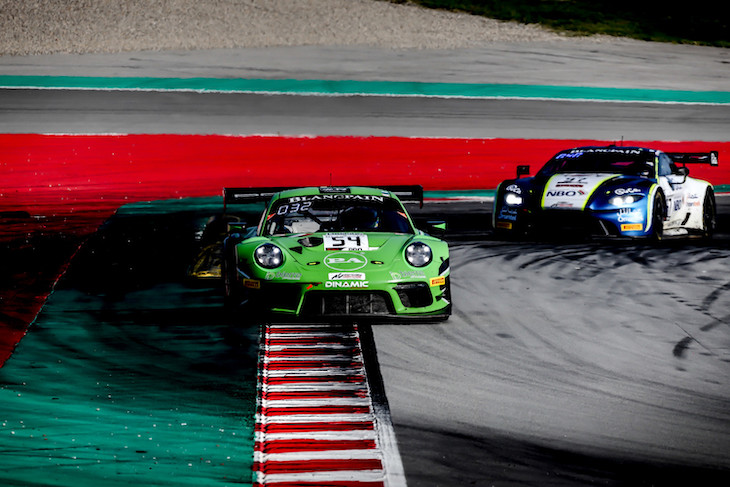 The team won its debut event at Monza last time and will tackle its second year in the series with a significantly bolstered line-up.

Dinamic will continue to challenge for overall honours with the recently announced #54 crew of Christian Engelhart, Sven Muller and Matteo Cairoli.

Two more line-ups have now been confirmed for the season ahead, which will see Dinamic compete in the Silver Cup and Pro-Am classes at long-distance events.

The Silver Cup crew will be fronted by experienced Italian racer Andrea Rizzoli, who was part of the squad that sealed Dinamic’s win at Monza last season. He will be joined by 23-year-old Danish racer Mikkel Overgaard Pedersen, who switches from the team’s Porsche Supercup programme. A final Silver Cup driver is set to be confirmed in the near future.

The Pro-Am assault will be led by the all-Swiss crew of Mauro Calamia, Ivan Jacoma and Roberto Pampanini. This trio contested last year’s Total 24 Hours of Spa with Scuderia Villorba Corse and will now tackle the full Endurance Cup for Dinamic.