Consecutive seasons as a works driver is a respectable achievement, many of motor sport’s all-time greats synonymous with a particular team or a marque. But as victories and championship success bestow a place in history, this can be a relative moment in time.

Consider the true career driver, those for whom a living depends on much more than raw talent working the wheel. Consistency and professionalism take many forms, and in today’s intensely competitive arena a revolving programme of uninterrupted employment is nothing short of impressive.

Patrick Long’s resume as a Porsche factory driver spans a multitude of assignments over a remarkable seventeen years with the Stuttgart brand. A constant of its driver roster and the only North American driver to have held the honour, at 38 years of age the Californian’s tenure has seen three championship titles in the ALMS, two Pirelli World Challenge titles, plus class wins at Le Mans (twice, pictured below winning GT2 for IMSA Performance in 2007), Sebring (twice), Daytona and the Nurburgring 24 Hours. Indeed, Long has driven at every 24 Hours of Le Mans since 2004. 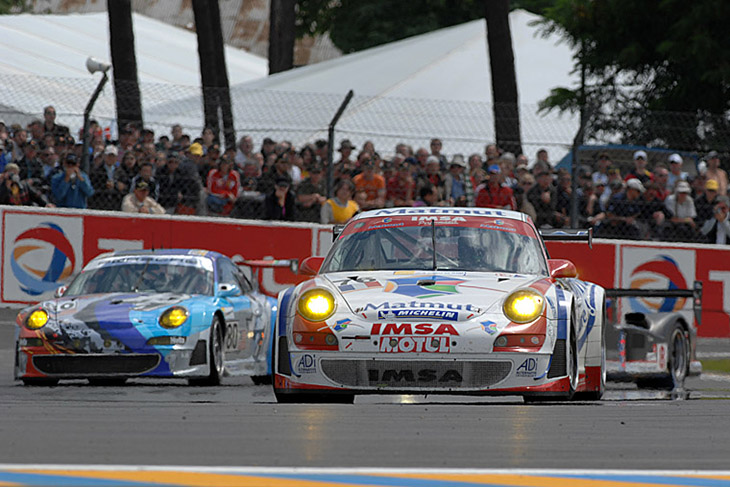 Prototype drives intervened, notably for Roger Penske’s ALMS campaign with the Porsche RS Spyder, as have various starts in NASCAR and even outings in V8 Supercars, but Long’s career is mostly associated with Porsche’s customer GT programmes in his native USA and across the globe, all year round. It’s still a busy schedule. 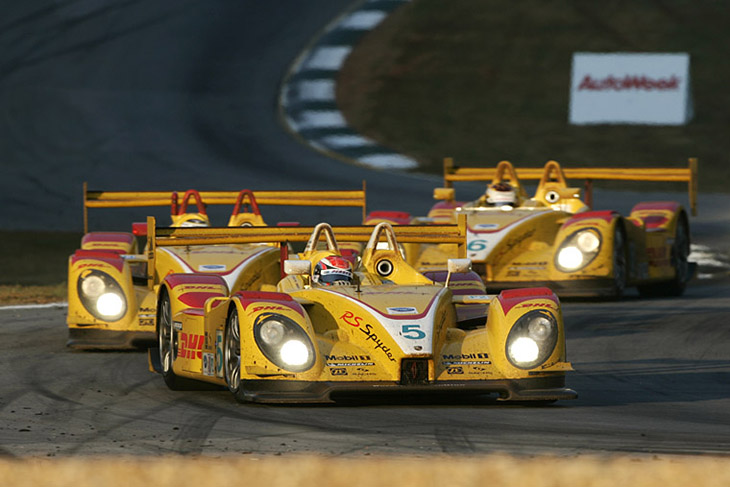 Amiable and always approachable, Pat took time to chat to DSC in between sessions at the Rolex 24 at Daytona. Relaxed and comfortable with his lot in the Wright Motorsport privately-entered 911 GT3.R, these drives are the mainstay of a factory driver support contract approaching two decades.

We were intrigued to know what makes the Porsche specialist tick, and what continues to motivate and retain his services:

“You know, I ask myself what the goal is to stay at the top of my game and therefore valuable to Porsche.

“First and foremost the performance on track has to be there, so I have to be hungry and I have to be focused and I have to be fit… because these kids come up and they are better prepared and they’re more intense; they understand more than I ever did at their age.

“When I think about when I was 20 and where a 20-year old is in the factory team today, there is a big difference!

“So they inspire me to work harder, but at the same time, I try to bring more and more value to Porsche as a driver. That might be in strategy; that might be in business and what I do outside of the paddock. It all adds up, but in the end, we’re here to sell cars, right..?”

Indeed, it is clear there is more than a racer’s passion for winning here, and through experience, a deep-rooted loyalty and sense of purpose prevails:

“We want to win races but ultimately our board requires us to sell cars. So I remind myself that is my job. I believe in the product, I subscribe to it personally with my own hard-earned cash and that makes it fun and engaging for me to get out and to meet the people who support the motorsport and also support motorsport through their choices of what they buy on the road: for a lot of them, it’s deciding ‘what’ to buy, versus ‘if’ to buy. Our platforms and our options these days are a wider range than we’ve ever had before.”

With highlights including leading roles with Dempsey-Proton, IMSA Performance, Flying Lizard Motorsports and White Lightning Racing, privateer teams have provided a wealth of development experience and a solid career path: 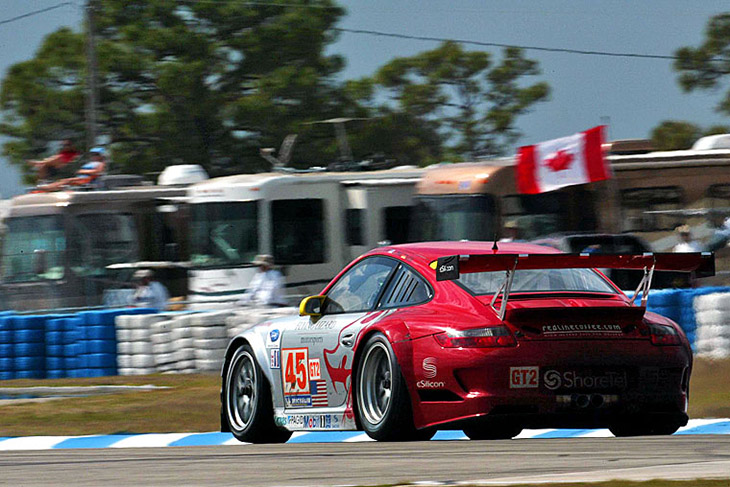 “Working with teams I enjoy; I love bringing a programme together. Obviously I’m not on the front line with a full factory effort with the GTE-Pro line up, but this is the second chapter of my factory
career. Porsche has always been a preparation hub: Race Cars. That means we have to develop cars, develop programmes, and we need to be a piece of the puzzle. And I’m very clear with
myself that you need to stay in your lane and be a driver, but there are plenty of times these days where the work is behind the scenes as well and I’m always honoured that people call me for my take on things.”

Looking forward, what does Patrick Long hope to develop for himself given this broader experience?

“I had a conversation with Dr. Walliser, who was our outgoing chief of motorsport, a few years ago over dinner. I said I have a lot of ambition left in me: it’s not so much about races or championships as it is about the future of our sport, the heritage of our company, and how those things play off one another in where we are heading.

“I see motorsport as one of the best foundations and training grounds for business. You’re circled around some of the most successful, ingenious and connected business people in the world, but you’re also living through the essence of ‘Team.’

“So winning an endurance race is, for me, osmosis and seeing how these teams operate, feeding from many different personalities brought here from all over the world, for example, for just one weekend here at Daytona, to go and beat another thousand people who are doing the same thing… that is an amazing school. Even passively you pick up a lot, but if you pay closer attention to the processes, policies, preparation, the re-capping… it’s an amazing university I’ve been going to, even though I’ve barely finished High School!

“I hope it pays off. At 38, I think I’m just about ready to find my path. Where sport can often make you feel like you’re just about to see the end of the road, I see it that I’m almost just at the start. I’ve spent the last two decades growing, travelling, winning, enjoying… but really it’s the people you’re hanging around, the old saying of ‘It’s not what you know, but who you know.’ There’s a great gift there.

“I think the youth needs to be aware of that. Because there is this aspiration to race fast cars, win big races and stand on big stages, but there is a whole bigger sporting process I wish someone had told me about. It’s the people around you that enable your success.”

So how does the factory driver position work, how are his choices made?

“In black and white terms, I get the call and I’m told where to go. But in actual fact, I think what seniority brings in Porsche are loyalty and trust.

“I think that goes for many organisations and upper management at Porsche, in North America and in Germany, I find we often collaborate to create a business plan and we build on that. I find in some years I have little to do with that, but in others, I have a lot of involvement in that. Certainly, I’m grateful that Pascal (Zurlinden) speaks openly to me, shares his vision for the year and asks what my ideas of how to fill my objectives are. We exchange ideas and iron things out. Some of it is just fate; the right sponsor, the right co-drivers, the right team and aligned with Porsche’s focus and it just comes together. 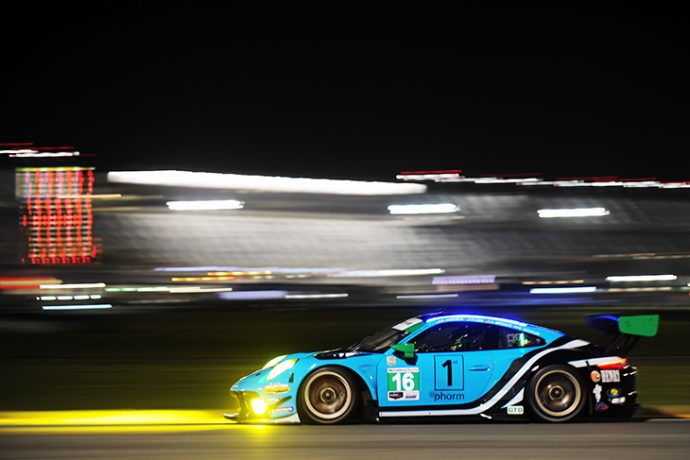 “I am a token American and love the cheesy tag-lines, but my goal is that there is always an ecosystem and that it’s a no-brainer. If there are synergies that are feeding off one another and it’s a win-win, how could you not?

“The last few years, the deal was so clear six months before the season started that it almost just happened, like when a good dinner party naturally just comes together.

“That’s how racing is right now for me and why I say on record that I’m having more fun today than I ever had. I’m enjoying motorsport here and now even though someone may speculate that I’m in the latter stages of my works career. These are the most enjoyable years.”

And the current situation at Wright Motorsports is clearly a part of that?

“I have great storylines in all different types; the Penske years, the Lizard years, the Petersen years… the chapter with Wright Motorsports in the last four of five years is that I’m going racing with friends, they’re engineering-based and they’re business-minded, so it’s just great. They’re doing a lot for Porsche and Porsche is doing a lot for them, not so much here in IMSA but in other programmes.

“It’s been cool to be there from the start. In 2016 the programme we thought we had put together for Effort Racing ran dry and I picked up the phone to John Wright and said, ‘I have an idea, what do you think?’ and he was like, ’Yes! We’ll figure out the details later, but let’s do it!’ 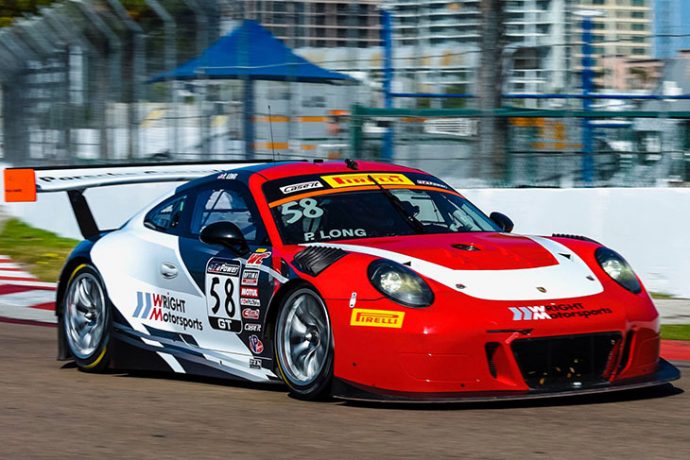 “Those are the types of deals you love, where people have your back and you’re growing a brand that’s kind of synonymous.

“If you think of the legacies of certain sportsmen in certain teams, I always try to immerse myself into a programme like Lizards or Penske, and now Wright, and really put a good amount of years there. Because the fans like that stability and it allows you to build on things. I’ve always admired drivers and sportsmen who have been able to have long-standing relationships, whether with a manufacturer or a team or both.” 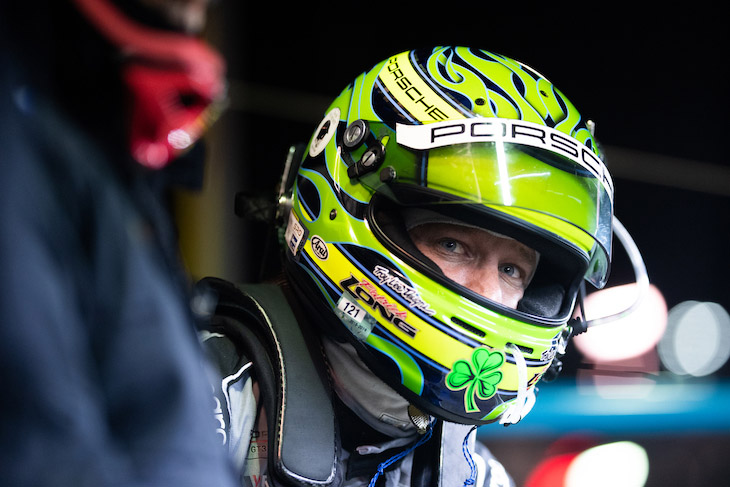 So, going back to his earlier comments, what sort of conversations and advice does he share with his teammates?

“I talk to young drivers and some ask me ‘what is the best way to forge a career in GT racing?’ and I say there are two ways: one is you are loyal and disciplined and calculated and become a product of a brand. The other one is you become a ‘one-stop-shop’ brand of your own, who jumps from car to car, a Jeroen Bleekemolen of the world, but you have to quickly decide.

“I admire a guy like David Brabham, who could step between manufacturers seamlessly. You felt like David was an Aston guy, you felt like he was a Bentley guy, or whatever… but actually he was David Brabham. His persona, his name and his product on track was his own brand.

“I’ve always been ‘the Porsche guy’ and that’s worked for me.”