Brendon Hartley is a very familiar name to DSC readers, Le Mans overall winner in 2017 and a double FIA WEC World Drivers Champion with Porsche in 2015 and 2017.

Now a Toyota factory LMP1 driver, and already retained for their forthcoming Hypercar programme there are likely to be more titles to come for the talented and popular Kiwi.

But for the first in a new series for DSC we didn’t ask him about any of that, instead, we wanted to learn more about the family that surrounds him, and in particular, his dad Bryan, and his brother Nelson, and their varied tales in the motorsport world, from beating Mark Webber on track (Bryan) to taking a Land Speed Record (Nelson – pictured above in younger days with Brendon) – Read on.

My father was a carpenter by trade but he always had a fascination with motorsport engines and mechanical things. He had a small workshop and it started off as something small called the Head Shop. And he was working on cylinder heads for race cars.

He was doing some full engines but people were more bringing in the cylinder heads and that’s why it was called The Head Shop.

That grew when I was maybe five or six so, maybe the mid-90s, to a bigger building and they had a big engine dyno and they were more by then rebuilding race engines rather than just cylinder heads.

As long as I can remember that, my dad would spend all waking hours down there. It definitely helped my career because we also had a go-kart dyno and he’d spend loads of time getting every last horsepower out of the go-kart engines and that’s the workshop where we had our karts and Formula Fords when I moved into single-seaters. 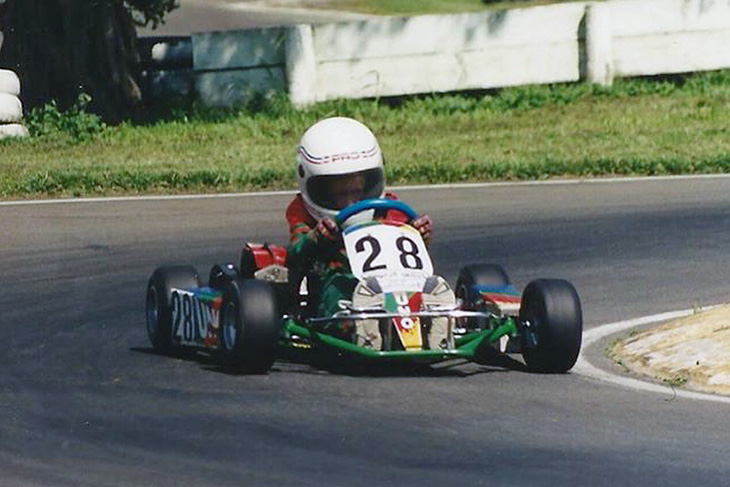 It’s definitely a family business. My mum runs the books and at any given time, there are one or two other employees, but it’s relatively small.

But now my brother Nelson is very much a part of it. And I’d say he’s one of the best engineers and designers that I have ever met.   And I know he’s my brother and I’m going to be biased in saying that but I’ve seen what he can turn out as a one-man show from the initial idea, design, manufacturing and he does that all alone, all self-taught, left school relatively young, learnt how to use all the software himself. And he’s an incredible engineer and thinks outside the box.

Since my brother has been involved, rather than just rebuilding engines, they’ve also got into manufacturing as well. A lot of the parts they put on these race engines now are actually parts manufactured on the CNC machine in-house, designed and built by my brother.

It’s always been a business rooted in motorsport and in the early days of my dad racing, it helped him to fund his own racing.

What racing was your dad involved in?

So, I need to brush up on my history here, he’s gonna be upset if I get all this wrong, but he did pretty much race anything with four wheels. 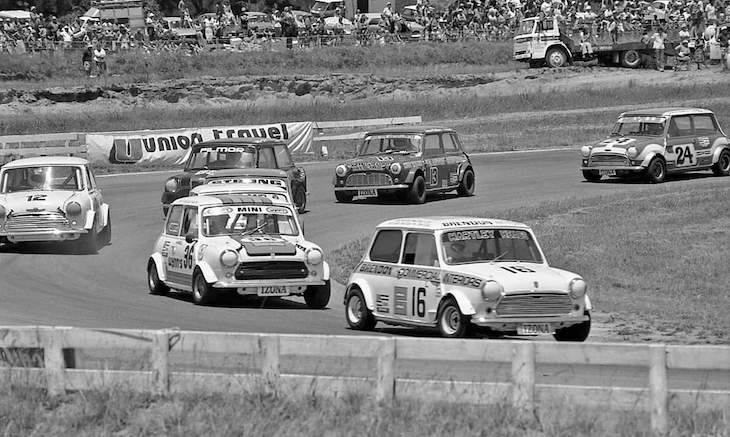 I remember as a young fella watching videotapes, of him driving Mini Sevens, I used to love that video and watched it over and over again. I actually own an old Mini now and I reckon that video did it! I have a 1967 car and, it’s also, by the way, the reason why my middle name is Morris!

He raced Minis, he raced dirt track Speedway which is very popular in New Zealand on oval dirt tracks.

He raced Formula Atlantic too. Before my time, Keke Rosberg was out here racing and dad raced against him amongst others.

Dad never had funding, but he did have the talent to rebuild cars, he bought a Formula Atlantic wrecked by another driver for peanuts. He then spent the winter months rebuilding the car and that was the car he raced the next year. 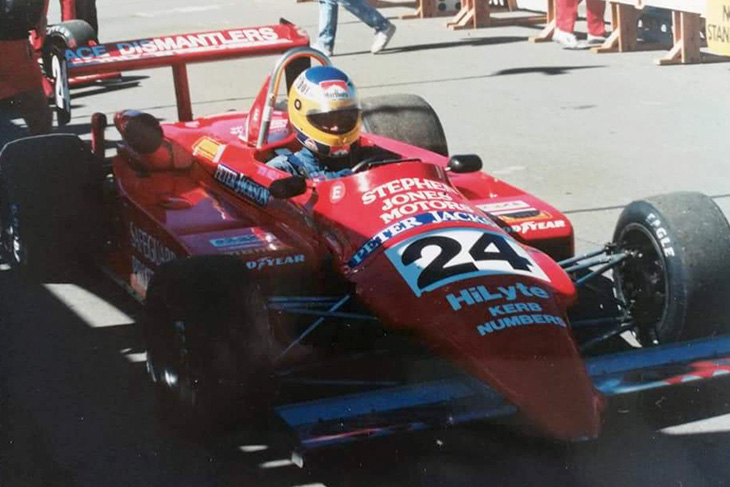 He also raced in Formula Holden and I did find out during my time racing with Mark Webber that dad actually raced against Mark in support for the first Melbourne Grand Prix. That’s cool but the only annoying thing about that was that Mark won the race the there was only a certain amount of stick I could give Mark for being around for that long! (Ah yes but Bryan did beat Mark in race one that weekend after Mark was pitched off the track early in the race!)

Formula Holden was basically a Formula 3000 with Holden engine. It was called Formula Brabham at one point too. So he raced a bit of everything in his career.

Everyone said he was a very good driver but never really got a break and never really had the funding to take it any further to Europe like many drivers that I’ve come across in my era as well. There’s plenty of talented guys out there but not everyone gets that opportunity.

So the stuff that the guys are turning out is that principally New Zealand? Is it New Zealand, and Australia, is it worldwide?

Mainly New Zealand at the moment, but particularly with some of the stuff my brother’s manufacturing and designing, I think he wants to be able to start sending parts worldwide.

Other engine builders want to buy an engine part to upgrade whatever it is that they are working on – That could be a drift car (one of their ex Toyota Century V12s in a Nissan Silvia drift car is shown below), it could be a race car, it could be their car that they’re mucking around in the garage, he wants to be able to actually manufacture parts and sell them worldwide.

He has already done quite a few engines around the US, Australia, and a project in Europe that I’m not sure I can talk about – it is though all really clever, really cool stuff.

It’s got room to expand, they’ve got CNC machines going and can start actually manufacturing parts that can be sent worldwide.

In terms of reconditioning an engine and putting it together, that’s more New Zealand and the majority of their business is through Speedway.  I know the UK has something called Formula One stock cars, yes. But we have something in New Zealand we call them stock cars or super stocks. It’s quite serious, it’s one of New Zealand’s most watched and participated in forms of motorsport. 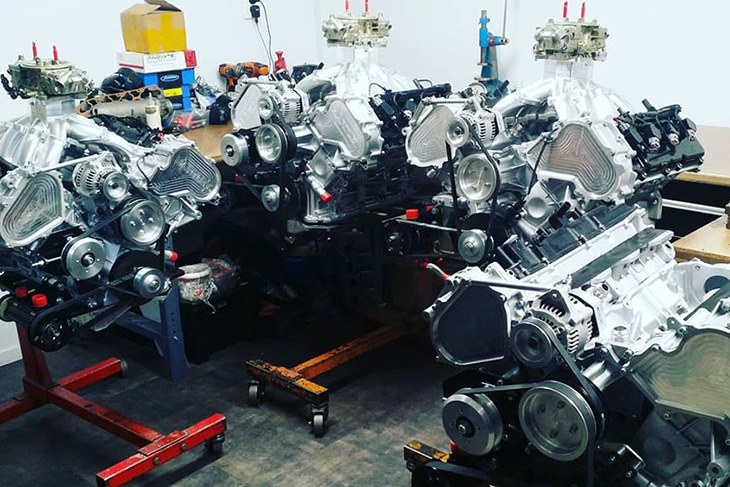 You can get 120 cars lined up, with big thundering V8s, it’s full contact.

It’s an oval, it’s a dirt track, you’ve got a concrete wall on the outside. So when you hit a wall, it hurts!

And they are built to crash into each other. So it’s not a demolition derby, these guys take it seriously, but contact is part of the game!

I believe in the UK, you’re allowed to nudge each other but it’s not full contact like it is in New Zealand.

Some of the UK drivers come to New Zealand every year to participate in something called the Teams Championships.

In my hometown, Palmerston North, that is the biggest sporting event of the year.

What happens is every province or town from around the country have a team of four cars.

Each race is one team versus another team and your four cars in each team are staggered through the grid.

Generally, how it works is you have two cars trying to win the race from each team and two cars from each team basically trying to put the other cars in the wall and put them out of the race. I think the only rule is you aren’t allowed to go backwards.

It always sells out and I love it, I love watching it that is. I wouldn’t want to participate!

Then there’s jet boating, which is very popular in New Zealand, they do some big V8 twin turbos with 1400 horsepower for these jet boats.

Then there’s the project they worked with where they broke the land speed record as part of a project with a 1964 Mini a few years ago, all sorts of funny projects like that are involved too. Really cool stuff.

The Mini was someone else’s project. Some friends of ours from down south. It was called Project 64 and my dad and brother built the engine (Nelson is pictured in the red race suit, Bryan, in the centre) 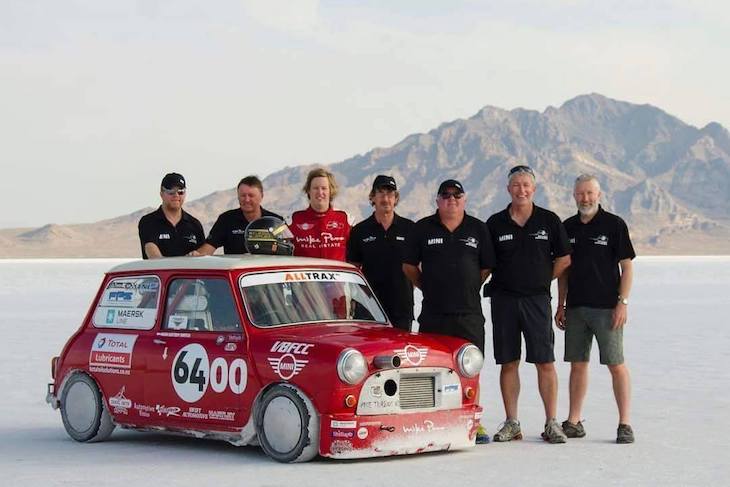 It was an original 1964 1000 cc Mini block and gearbox, it had some bigger gears than the original, with a BMW motorbike double overhead cam head with a big turbo on it.

I can’t remember how much horsepower they got (it was 328 bhp on methanol!). But I think they did more than 170 mph, (it was 166 mph but still wow!!) and my brother drove the car. There’s in-car footage of a 156 mph run in 2012 above and a lengthy piece on Jay Leno’s Garage below where the engineering of the car is discussed.