This overview takes us right back to the origins of Germany’s endurance classic. It also emphasises the quintessentially German nature of this event, for most of its existence, it was a race of national importance at best.

In the five editions that were held in years ending on a zero, only two among all 15 winning drivers did not hail from the Federal Republic; and we have yet to see a non-German team victory. Manufacturer-wise, BMW can lay claim to three of these five trophies, with Ford and Porsche bringing home one each, again, an almost perfect record for German brands. Ford, which at the time of this writing is reported to be contemplating a withdrawal from the European market, has long been regarded as a quasi-home team in Germany.

There had been 24hr races in 1968 and ’60, but their regulations made them more akin to road rallies. The last weekend of June 1970 saw the first edition of the 24 Hours “proper”, with uninterrupted racing through the night for a field of 96 entrants, the maximum allowed, 54 of which were classified.

It was a BMW fest, with three 2002 TI monopolising the podium.

In the battle of the tuners, Koepchen prevailed over Eifelland and Alpina.

Hans-Peter Koepchen would later change his allegiance and become the main man at fledgeling Toyota Motorsport GmbH in the 1980s. Hans-Joachim Stuck and Clemens Schickentanz put two laps on the rest of the field for their historic victory. 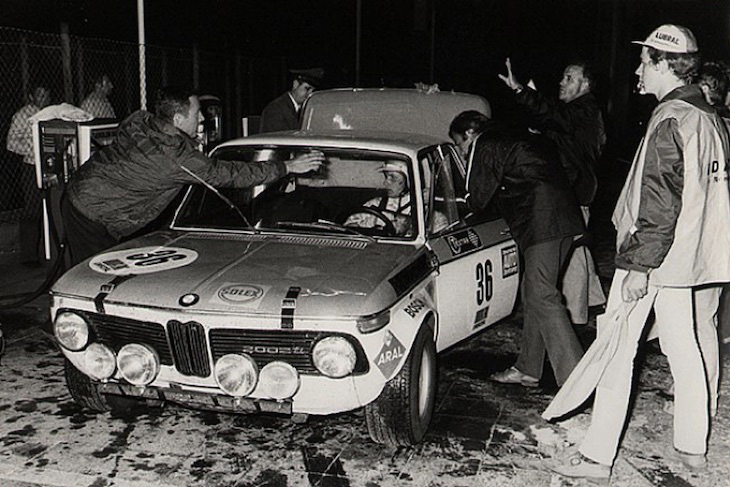 Stuck needs no introduction whatsoever; Schickentanz was one of Germany’s local stars of the era who could more than hold his own against internationally better-known drivers. He would go on to become 1973 European GT champion, and continue his career well into the 1980s.

By the time these 1980s finally rolled around, we had lost two editions of Germany’s still-not-quite-great race, in 1974 and ’75, as the global economy was rattled by the petrol crisis.

The ninth edition, then, had a somewhat more downscaled and cost-conscious feel to it. It brought the last overall success for an under-2000cc car, and win number two (out of a total, to date, of five) for the Ford Motor Co.

Only cars built to the specification of FISA’s Group 1 for stock production touring cars were eligible, along with diesel-engined machines, and Renault 5 Cup cars.

Nonetheless, 130 entrants were clear indication of a boom.

Speaking of which, the favoured Capri of Klauses Niedzwiedz and Ludwig, along with Helmut Döring, also went „boom“ in the dead of night which left Nordschleife specialists Dieter Selzer / Wolfgang Wolf / Matthias Schneider with their Escort RS2000 with a commanding lead that even grave suspension trouble could not eradicate.

At the finish line, one lap was left of their advantage, but that was more than enough. Wolfgang Offermann / Christoph Esser / Rolf-Dieter Mantzel (Opel Kadett GT/E) fended off Herbert Kummle, Karl Mauer, Winni Vogt with another RS2000 for 2nd place.

One notable retirement among that year’s 55 was 1966 German Grand Prix winner Jack Brabham who found his Audi 80’s 1600cc motor not quite up to the task – Audi was still a long way from challenging for overall honours at the ‘Ring.

New-burgring: we lost another one, in 1983, to the wholesale remodelling that brought us the present-day Grand Prix track.

At the start of the next decade, the craze of Group A had reached its sweet heyday, and fans were hard-pressed to find better racing anywhere in the world than in the Deutsche Tourenwagen Meisterschaft.

For its summer appointment on the Nordschleife, DTM had forged a mutually beneficial alliance with the 24 Hours. for a reduced cost, added glamour, and the best show in motor racing. 180 cars, divided up among 19 manufacturers, with drivers representing 20 nations, were sent off by a capacity crowd that lined the 25-kilometre combination of Nordschleife and Grand Prix track.

The factories were out in force. And again Ford reached for the trophy. And again, the blue oval was its own worst enemy. A bunch of Sierra RS500s led the way in their Sierra RS500 as the flag dropped at 4 pm on Saturday. By 8pm, most of them had either fallen by the wayside or lost precious time with an assortment of mechanical trouble which mostly seemed to concern their engines and drivetrains.

A four-car BMW express train now dictated the pace, with the two entries of Team Schnitzer out in front. Until they weren’t.

At 4 am, one M3 disposed of its coolant and fried its head gasket; their teammates’ run ended just before 1 pm with a blown engine.

This, along with the self-destruction of Ford’s armada, promoted the unproven Opel Omega 3000 (Klaus Niedzwiedz / Markus Oestreich / Volker Strycek) to a surprise podium finish. 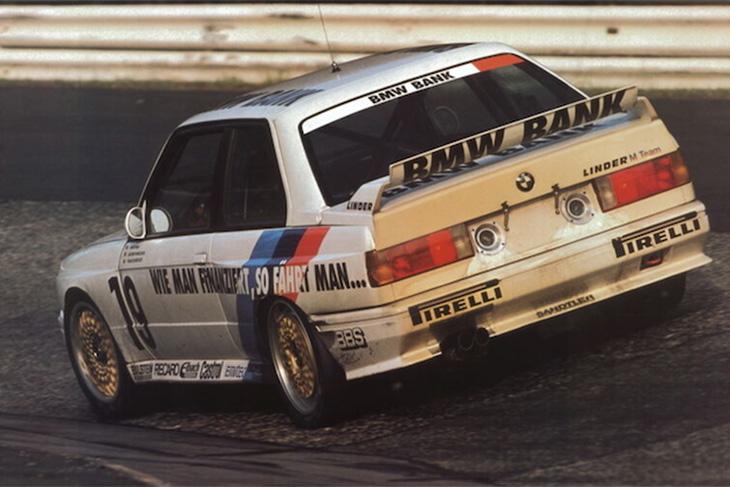 Just as Ford had had able back-up in 1980, BMW had two more works cars of Team Linder to fall back on. Double victory: Altfrid Heger / Jo Winkelhock / Frank Schmickler had a five-lap advantage over their teammates Kris Nissen, Jean-Michel Martin, Norbert Haug, and Ellen Lohr, the first lady to grace the N24 podium.

By now, things were happening. 1999 had got the GT party (re-)started, attendance figures soared, the grids kept growing.

Touring car race? Not much. The outrageous Nürburgring Specials reigned supreme – none more outrageous than Zakspeed’s Chrysler (or was it Dodge?) Viper.

The year before, this car’s brutal performance had made a mockery of any attempt to reign it in. So the organisers saddled it with the equivalent of a camping trailer in ballast. At 1650kgs, the Viper pretty much collapsed under its own weight.

Additional time in the pits for necessary brake and damper changes, and of course dismal fuel economy, were too much to overcome even with an unrestricted, nearly-800bhp V10 under the shapely bonnet. Even so, the big snake almost held its own. Peter Zakowski, Patrick Huisman, and Anthony Beltoise had every right to celebrate their 2nd place.

Economy was the deciding factors that year; and they promoted a much less outrageous, much more frugal (and still pretty rapid!) Porsche 996 GT3-R to the top spot. 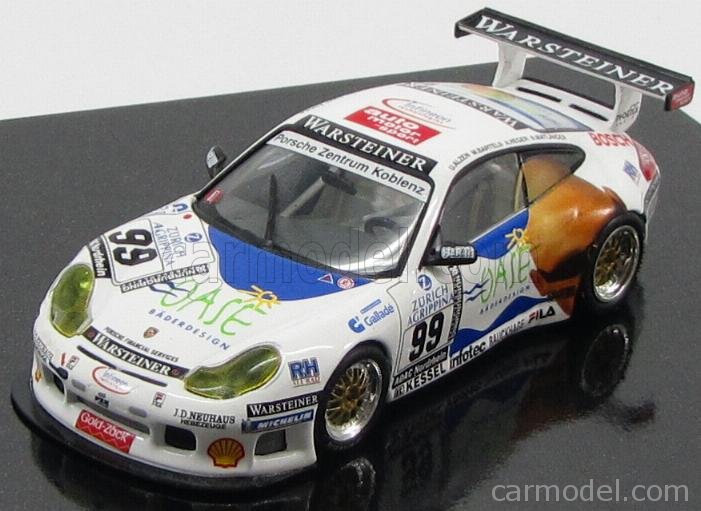 Bernd Mayländer / Michael Bartels / Uwe Alzen / Altfrid Heger won it by a single lap, with a new distance record of 145 laps. A well-sorted, well-driven 993 Cup was still podium material, as witnessed by Harald Becker, Thomas Wiedemeier, Mainhard Rittmeier, and Harald Grohs. They were five laps back at the flag. Viper fans breathed a sigh of relief when their favourite reptile was back, slim and trim, to clinch two more wins in ’01 and ’02.

We have all but arrived in the Here & Now. The situation resembles that of 2019. The sweet madness of the Specials had come and gone, GT3 dominated the proceedings and elevated the on-track spectacle to the next level.

No longer the world’s greatest amateur race, the N24 had become an affair of international importance and world-class quality not just at the sharp end of the field. The pace, too, had picked up substantially. The class of 2010 managed to turn a full nine laps more over the 24 hours than their predecessors ten years back. And yet, a GT3 car did not win.

Audi brought five “not-works“ R8 LMS, most of which ran into mechanical trouble. The perhaps least favoured of them ( for Dennis Rostek / Luca Ludwig / Marc Bronzel / Markus Winkelhock) worked its way up to 3rd place courtesy of a quietly efficient run; this was the only SP9/GT3 team on the podium.

Title defenders Manthey Racing blitzed everyone at the start and established themselves in a runaway lead until a stationary vehicle ended the Porsche 997 GT3’s run during the night. 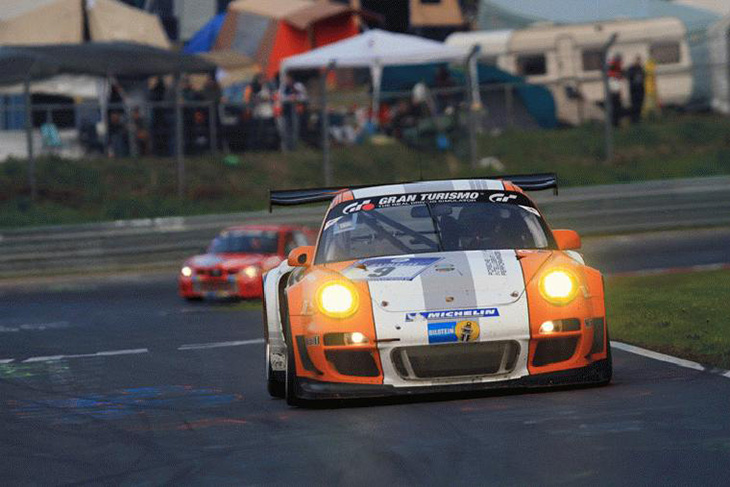 Porsche, though, had brought along something extra-special. The 911 GT3 R hybrid. Helmed by a crew of factory drivers (Jörg Bergmeister, Richard Lietz, Marco Holzer, Martin Ragginger) it steadily climbed up the leaderboard. Until it led. And led convincingly. Was this the dawn of a new motor racing era?

With three hours to go, the new era was called off when the hybrid coasted to a halt.

BMW was there, too. Entered in the E1-XP class for Team Schnitzer, the Schnitzer M3 GT2 gave its Nordschleife debut. Of the two cars, the “Dirkmobile“ (Dirks Werner, Müller, and Adorf, along with honorary Dirk Andy Priaulx) was set back by early contact and eventually fought its way up to 7th place.

The other one, crewed by Jörg Müller / Augusto Farfus / Uwe Alzen / Pedro Lamy, and not a single Dirk, never quite had the ultimate pace to challenge for the lead. It was kept in contention by consistency, smart team strategy, and ultimately the opposition’s bad luck.

At 1 pm, the BMW led the way. With a gearbox that was essentially in tatters, the team decided to go for broke. Somehow, nothing broke. This success also put Pedro Lamy at the top of a very special leaderboard: the man from Portugal has won the German classic five times (pictured top)

Only Timo Bernhard and Marcel Tiemann have matched this record. The BMW crew could not afford to ease off; less than four minutes separated them from the surprisingly quick Farnbacher Ferrari 430 GTC of Dominik Farnbacher, Allan Simonsen, Leh Keen, and Marco Seefried. Again, 154 laps were in the books. 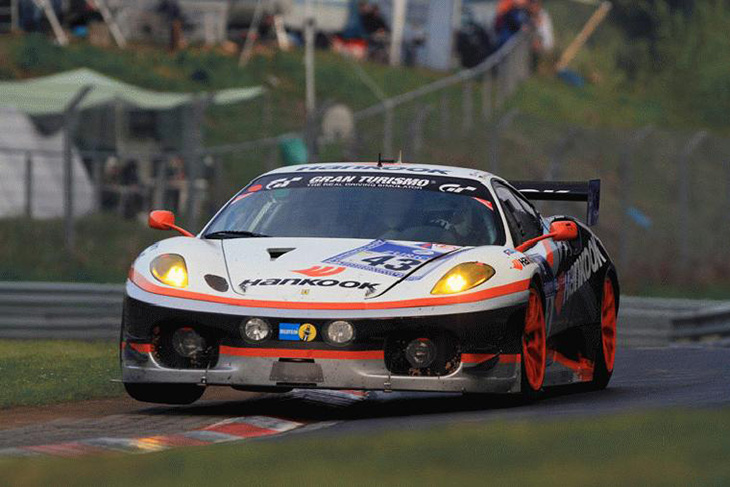