Australian author and writer David Greenhalgh interviewed Jacky Ickx at Le Mans in both 2016 and 2017.

He’s been saving the results for just such a time as this and those interviews are presented here for the first time.

Jacky Ickx is a remarkable man, in many ways.

When I interviewed him in 2017, I was accompanied by long-time DSC photographer Andrew “Skippy” Hall. Andrew, unfortunately, suffers from a degenerative nerve condition which means that he has to wear complicated brace and wire structures on his arms and legs. Before Ickx would allow my interview to begin, he asked Andrew about his condition and how he could take photographs wearing the braces on his arms, before assuring Andrew, “You are a hero!” 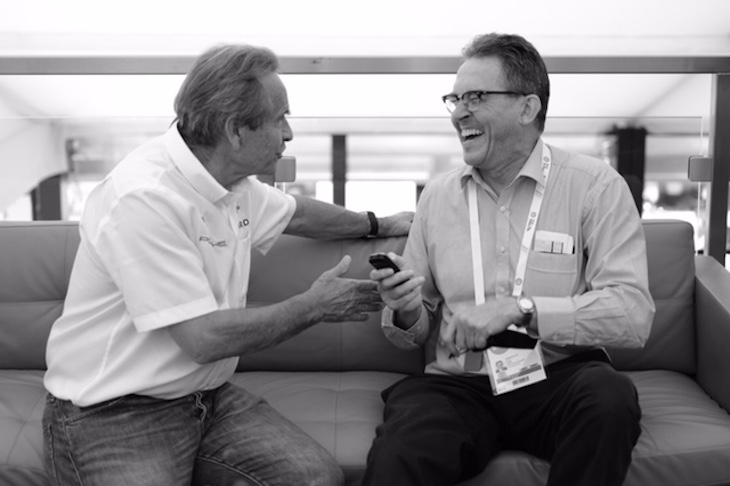 A year later, at Laguna Seca Rennsport, Hall saw Ickx but hesitated to go and speak to him. But Ickx had already spotted Hall and went over to ask after his health.

How many top-line drivers would have the humility or compassion to even show such interest in a stranger, let alone paying the tribute that Ickx paid to Hall? Humility and compassion are not entirely commonplace in this sport, and that in itself marks Ickx as someone different.

But it was the 1967 German GP on the Nordschleife which first flagged to the world that he might have some serious talent. Driving one of the F2 cars invited along to pad out the F1 field on the very long circuit, he set a time in practice which was quick enough to be third on the main grid. But F1, with the implacable sense of ego and self-importance which has long been its hallmark, decreed that the F2 cars couldn’t take their merited place on the grid for fear they would hold up the F1 runners. Ickx was sternly told to line up behind all the F1 cars, having been 20 or 30 seconds faster than some of them….

He was also starting to make his way in sports cars, debuting at Le Mans in a private Ford GT40 in 1966; “the Mark II Ford was a fascinating car to watch with that big Holley carburettor on top and with an incredible sound”. Then in 1967 he embarked on one of his key racing relationships: with John Wyer, who at that stage was running a GT40 derivative called a Mirage. “The GT40 modified by Len Bailey changed the profile, the roof, the nose and so on. I don’t know if it was progress or not, but that was an option taken by John Wyer before the return of the GT40. In those days it was empiric, it’s not like today when you have a computer, things were very different then.”

He won in the Mirage at the daunting old full-length Spa with Dick Thompson, recalling, “Yes, I was very brave in those days! But we never thought about it – if you returned there today, you would say we must have been nuts to do it at 320, 330 downhill: no catch fencing, no nothing, just straw bales here and there. But it was nice…”

Le Mans did not go so well; Ickx was out after just 29 laps. That race was famously won by Dan Gurney and AJ Foyt in the Mk IV Ford. Many – perhaps most – racing drivers have little knowledge or interest in the history of their sport, but Ickx doesn’t fall in that category. He reflected that he had recently been thinking of Gurney, “because I drove the Porsche F1 he won the French Grand Prix in, it’s called an 804, I drove it at Monaco in a demo. It was nice to drive the Porsche – but it was even nicer, it was the cherry on the cake, to know that he drove the car. He is a very, very smart person”.

The 1968 season saw Ickx land a Ferrari F1 drive. Not for the last time in his career, his outstanding wet-weather skills were on full display when he won his maiden GP, at Rouen. He had well and truly arrived, and was a man in demand.

But there was a problem: Ferrari was starting to shift its racing focus. Earlier in the 1960s, John Surtees and others had observed that Le Mans was probably more important to Enzo Ferrari than his F1 programme, but by the late 1960s this was definitely no longer the case. Ickx was very keen to keep his sports car career progressing in tandem with his F1 commitments, and didn’t like what Ferrari was offering on the former front for 1969. So having landed a works Ferrari drive at the age of 23, he left the Scuderia after just one year. Was it a hard decision?

“It was easy. The question is just a fact. In those days you can drive everything at the same time, you drive for Ferrari and Ford and you can do Formula 2 or saloon car racing, because there is no exclusivity. The mentality is: it’s only driving, it’s not a financial aspect of professionalism, there are no sponsors.”

So, just like Ferrari, Ickx had to decide where his focus lay. In 1968, John Wyer had abandoned the Mirage experiment and had run conventional GT40s. Ickx had a wonderful season in them, often driving the illustrious chassis 1075, which would win Le Mans twice. 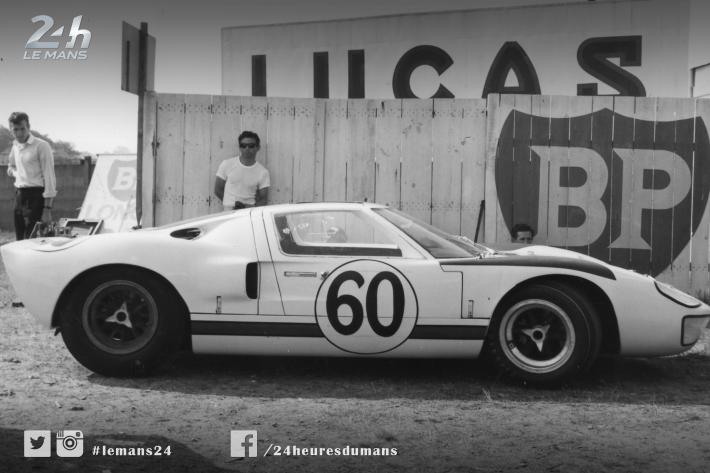 His season was especially notable for a virtuoso display in the Spa 1000km. It was raining at the start, giving Ickx another chance to demonstrate his wet-weather prowess. He bolted away in the lead, and duly came around at the end of the first lap; alone. As he disappeared up and over the hill towards Burnenville, the crowd in the grandstand at the start line waited, and waited, and waited – and then began to laugh. But there had been no pileup behind him; it was just that he had built up a lead of 39 seconds on that one lap… John Wyer, not a man to lavish needless praise, described it as, “sublime, but almost ridiculous”.

So Ickx knew all about the merits of a Wyer GT40, and it figured large in his career choice for 1969. By then, the Cosworth DFV was looking like the engine to have in F1, and he knew that Jack Brabham would be using Cosworths in 1969 after encountering drastic problems with the Repco engines in 1968. So did Ickx go to Brabham in 1969 just so he could have a Cosworth? “No, because everyone wanted a long distance programme, and I wanted to do it with the GT40. He [Ferrari] had the 3-litre which was not really good at the time. I opted for a solution which was Brabham in the Gulf colours, and the GT40 also in the Gulf colours. This sort of timing you don’t choose, it just happens. It was fine and it was accepted by everyone.”

He did very well in the Brabham, winning two GPs and finishing runner-up to Jackie Stewart in the World Drivers Championship. But Jack had some reservations about Ickx as a person, describing him as “very self-possessed” and “rather aloof”.

That same career choice which placed Ickx in the F1 Brabham of course also paved the way for his epic win at Le Mans in 1969.

The story of that race is very familiar. At the start, Ickx walked across the road to the Ford, disdaining on safety grounds the famous run-and-jump start which had been a trademark of the race for decades; his countryman Willy Mairesse had suffered an enormous accident on the Mulsanne Straight on the first lap in 1968, having neither closed the door nor fastened his seatbelt.

Just under 24 hours after this mute protest, after many of the quicker cars had fallen by the wayside, Ickx found himself in a pitched battle for the lead with Hans Herrmann (works Porsche 908), passing and re-passing in the closing laps. Ickx calmly sized up the strengths and weaknesses of the two cars; calculated that if was in the lead at Mulsanne Corner on the last lap he would win; and duly ambled to the chequered flag with, oh, seconds in hand…

As for what John Wyer thought about him walking across the track at the start, Ickx concedes, with a nice line in understatement, that, “he would’ve been quite upset if I’d finished second; luckily I won!

“Everyone liked me so nobody dared to say anything; I was doing well in those days, so they feel it was better not to argue immediately, later would have been probably more wiser.

Why did he do it? “Because in those days almost every weekend there was a fatality, not only in F2 and the argument about being ejected from the car was not valid any more. There were still people thinking it was easier in a way to be ejected from a racing car for whatever reason, fire or whatever.

“The reality is the seatbelt has changed the planet for everyone in the world so the problem with the Le Mans start is that you run, you jump in your car, if you want to make a good start, you have to wear it down the straight. It is not easy to put your seatbelt on at over 300 kilometres, or else you have to wait for the end of the first stint.

“As I was not a real contender for the victory, and also the philosophy of the race was not to do a grand prix – but if you finished you were guaranteed to finish well – I thought at that point it is better to start last, put your seat belt on, and then go. But clearly it’s not a joke when I say: it’s a lovely story when I won, but it can be totally the opposite without winning – today you would have said: remember that race when you were so intelligent to start last and so on, and you finished second”.

Ickx returned to Ferrari in 1970, to drive the 312 in F1 and the 512S against the fearsome Gulf Porsche 917s in sports cars. “When he [Ferrari] had a sports car programme, I came back. We have always been on good terms. He was a very sensible person and very sweet too, with me anyway”. 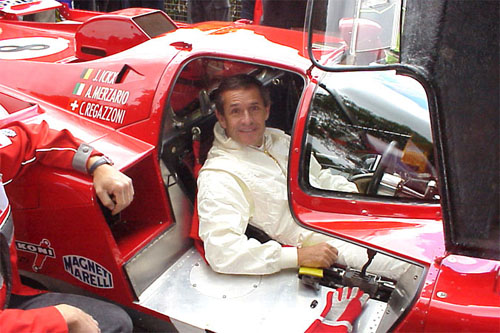 Ickx came within a flat tyre at Watkins Glen of winning the F1 World Championship for Ferrari that year, mounting a very impressive late-season charge after runaway title leader Jochen Rindt had been killed at Monza. Ickx was philosophical about his defeat, well aware that depriving a dominant, but dead, driver of the crown would forever have been seen as a hollow win.

It was the high point of his F1 career. His return to Maranello also enabled him to put together two very strong endurance seasons in 1972-73 in the very neat and fast 3-litre 312PB sports cars, after the 5-litre Porsche 917 and Ferrari 512 were banned at the end of 1971.

Perhaps not surprisingly, the little Ferrari provided the opportunity for some more heroics at Spa: “I went through the Masta Kink five or six years ago, and frankly I was very surprised: it’s narrow and bumpy, and it’s probably flatter today than it was in those days. 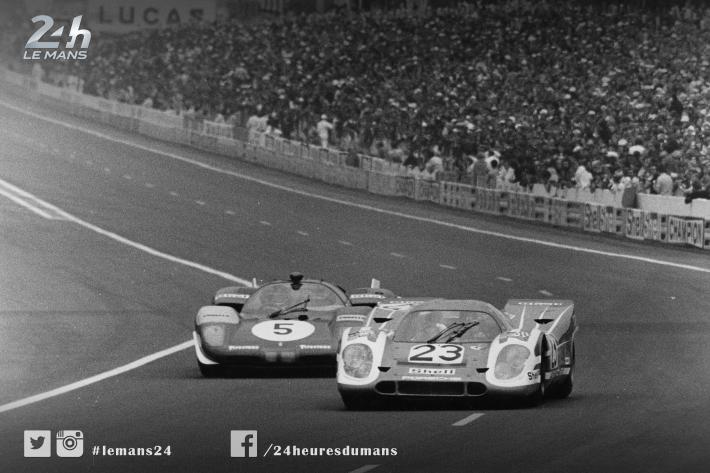 But this time his departure from Ferrari was not so well-timed. Although the marque’s 1973 F1 campaign had been a complete shambles, their dramatic renaissance began in 1974 – but Ickx was no longer there.

In any event, the heady days of manufacturers running in both major categories had gone: “In 1974, when I wasn’t with the team any more, Ferrari realised he had to choose to either go with Formula One or long distance because financially it wasn’t working, and also compared to endurance racing, Formula One went up, and endurance racing went down”.

Pics above courtesy and copyright lemans.org