Here’s Part Two of David Greenhalgh’s interview with, and appreciation of, Jacky Ickx – You can read Part One HERE

Further Le Mans triumphs followed for Ickx in 1975 (in a Mirage with Derek Bell against a sub-strength field) and 1976 (in a reasonably straightforward run in a works Porsche with Gijs van Lennep). 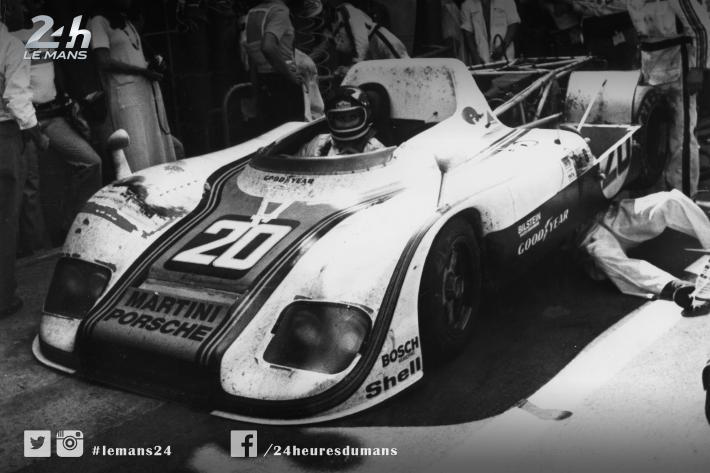 The works Porsche 936 he was sharing with Henri Pescarolo had an engine failure after four hours, so he was transferred to the sister car, which was in the capable hands of Jürgen Barth and Hurley Haywood. But that car had encountered fuel pump and head gasket troubles of its own, and was languishing in 41st – 15 laps off the lead – when Ickx hopped on board. 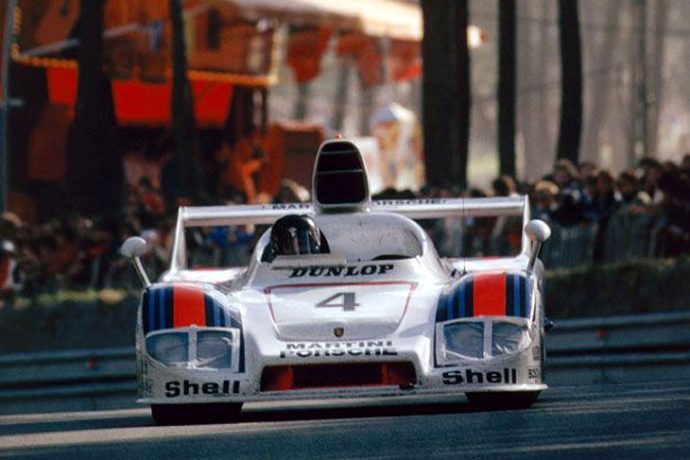 It wasn’t 41st for long. The three of them started scything through the field and were up to 5th by midnight. Indeed, it was during the night hours that Ickx really transcended himself. With instructions to drive flat out, he did just that, for hour after hour, with brief spells for the co-drivers, who were very well aware of the magnitude of what their newly-acquired co-driver was achieving. Haywood commented, “That was phenomenal, it went down in history as being one of the greatest drives ever”.

However, the 936 was not quite so appreciative, doing its absolute best to expire late in the race. Dramatically, Barth nursed it around for two more laps to the flag on its very last legs, to claim an extraordinary triumph. Ickx thinks that, “It was fascinating because we did something we had never done before, going flat out because what is the risk, there is no risk. And it’s fascinating to see that at first you’re 41st, then 35th, there’s something happening, then you reach the end and get in the top ten and you start to think, why not? That was fascinating.

“And then you over drive, it’s special, the race of your life, but not only for you but for everyone, for the mechanics changing the wheel, the guy refuelling, the guy behind making the calculations, they start to believe it’s possible, it’s fascinating.

“It’s a confirmation, never give up. Honestly, it was lost – theoretically. But practically, we did it. We all sublimised ourself and we did the race of our life. You drive well generally, you are competitive, but sometimes you are unbeatable, you don’t know why, everything you try, works.

“I was not exhausted [at the end], I was broken. Such an effort for such a long time, because I did three stints in a row, one stop, three stints again, so I changed during the night the condition of the race because every hour we were gaining, it was fascinating not only for me but the other drivers as well, so to enter in that game as well as the mechanics and the engineers. Things were lost, they started to believe we could do it and flat out because you have nothing to lose. We had no rev counter for the whole race, so all changes were done by ear.

“The topping of the cake was to have the broken cylinder at the end. Yes, at the end I was happy not to finish the race, firstly because I couldn’t, and also because I couldn’t stand to lift a car with a broken engine. You know I’m not very brave; in reality I was happy that Barth finished the race for me. Just to think that you stop on the straight with the engine definitely dead, that was not for me; but I was destroyed also”.

Ickx’ fifth and sixth wins at Le Mans, with Derek Bell in 1981 and 1982, were far more routine. Ickx was a key member of the works Porsche squad when Group C was introduced in 1982, and the factory’s 956s and 962s were nearly always the class of the field. He won the WEC in 1982 and 1983, and generally was not subjected to quite the same level of drama as he had been in some of his earlier years. 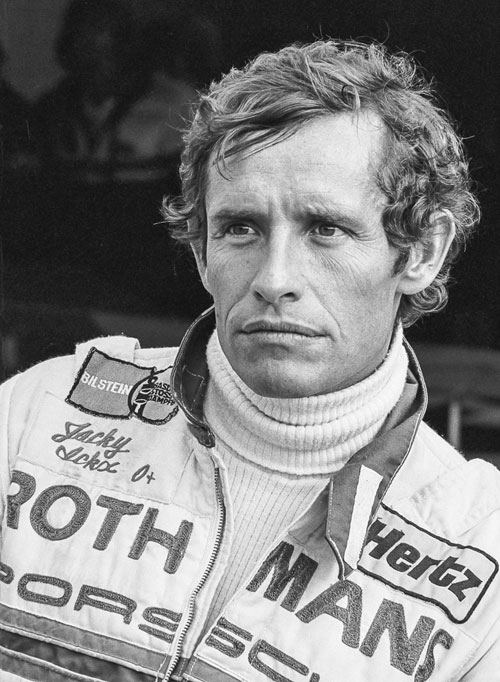 But that all changed in 1985. Stefan Bellof, the coming man with speed and talent to burn, had previously been in the works team but was now driving a private 956 for Walter Brun. Bellof was no friend of Ickx. Rushing down into Eau Rouge at Spa, the young gun went for a very long-odds passing move on the old master. It all seems so symbolic: going for a miracle move at the most famous corner in the sport, in full view of the pits, at a venue which was not only Ickx’ home track, but which had provided a glittering showcase of the Belgian’s talent for the last 20 years.

It all went disastrously wrong for Bellof. Ickx helped to extricate the fatally-injured German from the wreck of the 956.

Perhaps it was time to go.

There is a strong and recurrent theme in many Ickx interviews over the years as to the importance of the support provided by team and public to the driver. “The co-driver was important, but the success comes from those people you never see who build up the project, and build up the car to a winning car. These people you never see, they design, they work, they make a programme; all these engineers, they create a product. If you’re lucky, if you’re in the right timing, you have one of these cars. To win with a car which is a winner from the start makes a hell of a difference.

“With a team of three, there is always one that gets all the trouble, and there is always one that has no trouble, so your only problem is to keep the car on the track and go as fast as possible. But the reality: things are easy when you are in the right team. It’s unfair in a way because you only see the drivers under the spotlight, but those who have really made the biggest effort are those people you never see.

“I consider the spectators the judge of the show you’re giving to them. If they come in large numbers, if they keep speaking about it, it’s because they found a great show, the show on the track, the show next to the track, the atmosphere, the human atmosphere. They are the people who decide in reality, if you want to take a short cut, many people try all sorts of things, but in reality, if you don’t have a good show, if you don’t have the spectators you expect, you have to think to yourself what do I do wrong? What do they expect? And most of that time, organisers never ask that question”.

Asked if he has a favourite car, Ickx replied, “I have been successful here [at Le Mans] and I never heard anyone say that the winning car was a piece of shit. The evolution has been so great from year to year, every car is so much better year after year it is difficult to say, but when you have the success it is hard to complain. You never find any excuses for winning!

“It’s not the speed that was interesting, it was the success, you understand?”

With Fernando Alonso’s recent efforts, there has been renewed attention on the so-called Triple Crown of motor racing – even though nobody seems to know if the F1 component of the Crown is meant to be the Monaco GP, or the entire Championship. But Jacky Ickx won a triple crown of a different sort: he scored major victories in all three branches of the sport.

He is mainly known for his exploits in sports cars (the six wins at Le Mans, the two WECs, and countless other major races). But he also won eight F1 GPs, in addition to which he won both of the world’s biggest touring car races, the Spa 24 Hours (which only became a GT race long after Ickx had retired) and Bathurst 1000. Who else in the history of the sport has done all that? Nobody.

And yet, and yet…

You will never find Ickx’ name in the lists that journalists and other pundits like to prepare of the great drivers of history. He was undoubtedly a very polarising figure. Notwithstanding his assertion above that “everyone liked me”, one doesn’t have to look very far to find other (and indeed stronger) versions of Jack Brabham’s assessment of Ickx as a man.

Jackie Oliver, who shared that famous win with Ickx at Le Mans ’69, told Motor Sport that he regarded Ickx (along with John Surtees) as the most difficult and self-centred team-mate he ever had. Derek Bell acknowledges that Ickx was widely regarded as a prima donna, although that was not Bell’s own assessment. Other drivers have made critical comments about Ickx over the years.

Such personality issues are impossible for outsiders to assess, especially at this remove in time, but they do mean that Ickx stands as an enigmatic and slightly mysterious figure. At the very least, it seems safe to say that he was regarded as his own man, a man apart. Perhaps that walk across the road at the start of Le Mans ’69 says it all.

Be all that as it may, Jacky Ickx should be forever assured of his place in the highest pantheon of the sport’s great drivers, especially in sports cars. He is a titan.