Here’s another dip back into the DSC archives, this a story posted by Gary Horrocks back in December 2003 with Gary looking to a little historical perspective, as he looked back to two events at Laguna Seca, events that got his juices flowing.

As a historical note, the Circuit Manager when these two races happened was future IMSA President Scott Atherton. 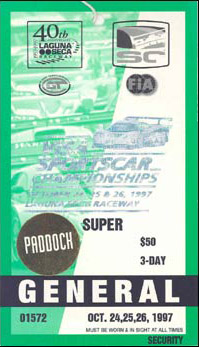 Sportscar racing in the United States was possibly at an all-time low. Gone were the glory days of the IMSA Camel GTP Series, a victim of its own success. Instead of the all-conquering Toyota GTP, we were served upconverted GTP cars and later some decent racing between Ferrari 333SPs and Riley and Scotts. While there was some good racin’, it was not racing that captured the imagination of the fans. Unfortunately, there were many instances when the competitors outnumbered the paying spectators.

Us hardcore racing fans knew about another series, one that were mainly based on the other side of the Atlantic, and maybe it was a situation of feeling that the grass was greener over there, where some of it sure looked interesting. To me, the BPR was the series that caught my interest. The thought of seeing Ferrari F-40s race amongst various Porsches, Lotus and later the McLaren F1 was just too much. These were genuine, exotic, supercars and while they were street legal, they were also full of technology. ‘Why, oh why can’t they race here in the States?’, I kept asking. Little did I know, but later on, I was to get my wish.

Well, as is known to happen when a sportscar series gets popular, the FIA took over, just as it really got going. I’m not sure if it was the rules, the manufacturers, the personnel or the sanctioning body (or all four) that again let things get out of hand, but for 1997 and 1998, we were able to witness some spectacular machines, racing is truly an international series. Were the costs out of hand? Of course, they were. Would you expect anything else when the factories are involved? 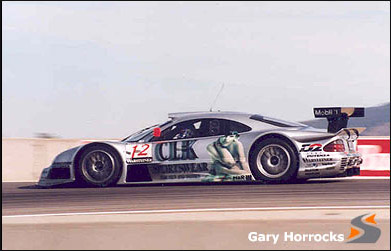 OK, so the racin’ wasn’t the greatest. Once Mercedes got their car sorted out, there was no stopping it, but the show was spectacular. Granted, the various Mercedes and also the Porsche GT-1s were all blatant attempts at circumventing or taking full advantage of the rules, but when are factories not known for doing that?

Even though Laguna Seca is a 14-hour drive for me, the distance did not prevent my Dad and I from travelling there for the May IMSA races in 1984-87. They were great times, from an era I fondly remember. Due to various life circumstances, I hadn’t been back to Laguna, but when it was announced that the FIA Series would conclude their season there in ’97, it didn’t take much prodding for my dad and I to plan the trek.

As the word got out about the race, it was apparent that Laguna Seca was beginning to resemble Devils Tower in the movie Close Encounters of the Third Kind. All kinds of diseased people were making the trek to witness the event first hand. Hmmm, maybe those mashed potatoes did resemble a McLaren long tail… Anyway, it was apparent that there was a pent up demand for genuine factory based and supported racing. 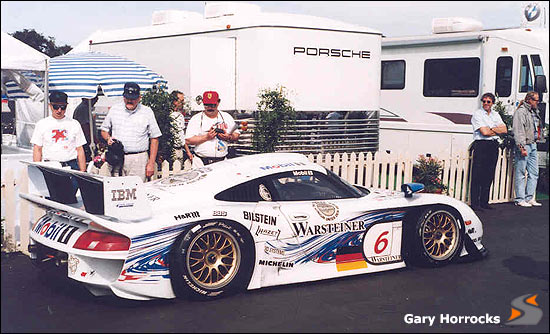 When it was all said and done, six of us piled into my minivan for the long trip. Stupidly, we left Thursday night, about 8:00 pm, with the intent of driving straight through. Big mistake. Salinas had never (and probably will never will) look any better than it did then. Thankfully our Motel had one of our rooms ready for us so we could at least shower. When was the last time you showered just before you went to a race? 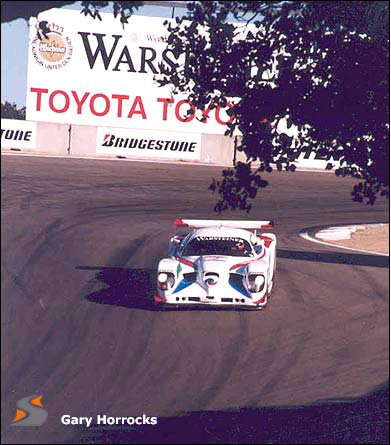 Upon arrival at Laguna, I was running on residual caffeine and sugar that was still in my system from the drive. I guess massive quantities of Mountain Dew and Peanut M&Ms did the trick. First stop was the Corkscrew, and the timing was perfect, as the FIA cars were on track. Through one’s life, certain things are permanently etched in your memory bank. Birth of a child, your wedding day; you know the stuff. Well, the sight and sound of the Panoz blasting out of the Corkscrew is now officially one of those moments for me. It wasn’t just the sight and sound, but it was also the feeling. That Roush Ford V8 noise just hit you in your chest. Truly a magical moment. I’m freaking out along the fence line, soaking it all in, when I finally look at my dad and the rest of the group. I never thought it was possible to sleep in those circumstances, but there they were on the hillside, completely passed out, and oblivious to the on-track activities and the antics of one freaked out fan. 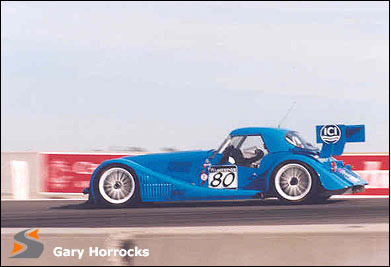 The cars that were at the track were absolutely magical. The Panoz, the Mercedes, the Porsche GT-1s, the long tail McLarens and the rest – including the Morgan – were stunning to just look at, but on the track, the combination of sights and sounds was just too much.

Most of the weekend was a blur, and without checking resources, I’m not sure if I can actually remember many specifics of the remainder of the weekend, but needless to say it was worth the effort. Yes, even if dinner at Kentucky Fried Chicken on Friday was about as lively as feeding time for the zombies in The Night of the Living Dead. We did have mashed potatoes, and I do think I saw someone sculpting them to resemble a Panoz… 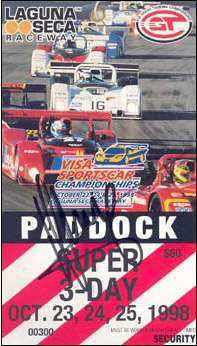 In ’98, a much smaller group of us returned, but this time we were smarter and flew down, arriving in a much better mood and much more relaxed. While the same initial excitement was not there, it was still a simply amazing weekend. Yes, the Mercedes dominated yet again, but who cares? This was racing at the highest level possible for sportscars. Among the highlights was the amazing rain and low clouds that shut down the track for quite some time on Saturday, and that I got to speak one final time with my long time hero, Klaus Ludwig, as this was to be his farewell. The sights and sounds were something that just had to be absorbed yet again. Little did we know at the time, but this was the end of the line for the series. The costs were too high to continue (sounds familiar doesn’t it) but it was sure glorious while it lasted.

But, looking back at it, what do I remember about these races? Obviously, the central theme to all of this has to be the cars. These were racing cars that were exciting. Maybe the racin’ wasn’t terribly exciting, but the cars were incredible. Just to be able to see these machines in their true element was enough. It was the technology on display. It was the atmosphere and the setting. It was the people; the friends that travelled from all over the land to meet and see the spectacle. 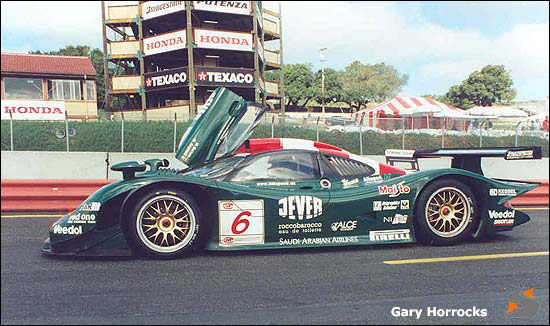 The timeline or family tree of sportscar racing may have many convoluted twists and high and low points, but I truly feel that it was the appearance of the FIA cars on US soil, at both Sebring and Laguna, that kick-started the re-emergence of sportscar racing here. Don Panoz was just starting to emerge as a power, and I’m sure that what he saw at these events got him moving to where we are now. So maybe the competition wasn’t close, but how many of the so-called glory days offered close and competitive racing? This was technology at its finest, on the track. Manufacturers pushing the envelope and the rule book at the same time. 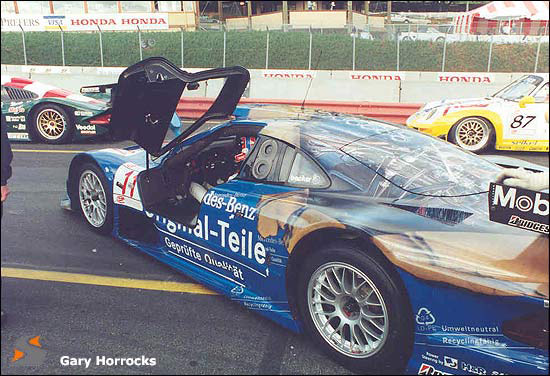 Remember back to the Can-Am. It was typically dominated by one make of car, typically a McLaren, and then later Porsche. Endurance racing in the late ‘60s was dominated by Ferrari, then Ford, and then by the Porsche 917 in the early ‘70s. These are the cars that captured the imagination of a generation. For all the constant whining about the Audi domination that we have witnessed for the last few seasons, somewhere down the road, we will be fondly remembering those same cars that some are bored with right now.

Sportscar racing, especially when based upon the technology, will be an up and down thing. Rules will be put in place to slow the growth of speed. That is just a fact of life here in this sport that we all love. I don’t believe the desire for, or market for, this has ever, or will ever, go away. It is just a matter of catching the imagination of the fans. That is one thing that the FIA Series did for those two magic seasons, at least here in the States. I feel that the ALMS has taken this belief and carried it on, at least in tradition. Long may that belief and tradition continue.