The latest in the catch net of quality content from DSC’s early years is this reflection on the eight-year career of the Riley and Scott MkIII, winning big races and Championships too in the hands of very capable teams, but also giving aspirant entrants a route into top-class sports prototype racing in a 21 car production run.

Farewell To The Riley & Scott MK III – The Winningest Prototype Of All Time?

The 962 and the 333SP might argue against that, but this wasn’t a racecar designed or funded by sports car giants like Porsche and Ferrari. The MK III came from the family-owned firm of Riley & Scott Race Car Engineering. The following will chronicle this car’s incredible career, leading up to what looks like its final race next month.

IMSA was introducing a new prototype sportscar for the 1994 season, the World Sports Car. Riley & Scott debuted their design model of the new car during the 1993 season. This is the first model of the MK III, shown during 1993. Bill Riley explains: “Narrow sidepods worked well in the wind tunnel, but the customers thought it was too far out at the time.” 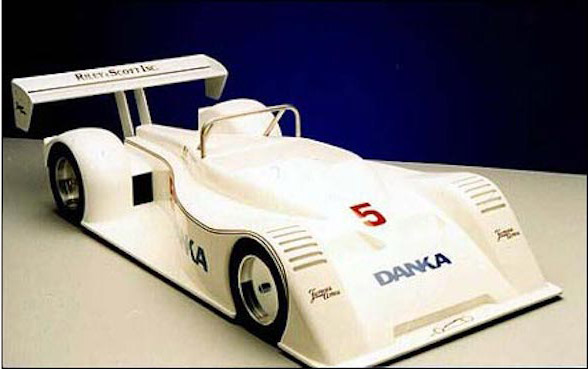 Initial interest was slow, but midway through the ’94 season, Rob Dyson called on Riley & Scott to improve the Ferrari / Spice he was currently running. This was the start of quite a productive relationship.

Bill Riley: “We then sold two cars to Rob. The first car was designed and built in only four months!” “Bob (Riley), along with renowned aircraft designer John Roncz, used Computational Fluid Dynamics to finalize the body and wing design.” CFD basically uses a computer program to simulate a wind tunnel test on a design. “This was not common in racing until five years later. I believe that was one of the reasons for the cars’ success.”

The first MK III was delivered to Dyson Racing just before the start of the 1995 IMSA season opener at Daytona. Although the new car struggled in its first two outings, an unbelievable story of success was about to unfold. In just its third race, the new MK III, piloted by James Weaver, not only set the fastest lap but finished first overall – in an accident-marred event at Atlanta. Ferraris were second and third, and the whole of the second half of the decade would effectively be between these two machines in North America. Atlanta began a string of podium finishes at every race for the rest of the season, including wins at Watkins Glen, Sears Point and Mosport. At the season finalé in New Orleans, Dyson Racing placed the MK IIIs first & second overall.

For the next two seasons – and beyond – Dyson would not be alone running the MK III. Several new teams would enter, including Lee Payne and the R & S factory run two-car team for Doyle Racing. The result was domination. Doyle Racing, with driver Wayne Taylor, started the ’96 season with a victory at the Rolex 24 Hours of Daytona (photo) and followed that with another at the 12 Hours of Sebring. The high speeds at Le Mans didn’t suit the R&S as much as the Ferrari though, and the Triple Crown of ’96 looked and was an impossibility. But back home, the MK III teams would combine to score overall victories at Texas, Sears Point, Mosport, Dallas and the Daytona Finalé. The R & S would score a total of nineteen podium finishes that year, punctuated by sweeping the podium at Dallas and Texas. The ’96 season ended with Wayne Taylor being crowned IMSA champion. Bill Riley adds “Winning Daytona and Sebring with the factory team was the best. Ferrari was not happy about that.” It should be mentioned that the Ferrari 333SP was a formidable foe and the competition between the two marques was fierce. Max Papis’s now-famous charge in the Doran Ferrari, during the last hours of the ’96 Rolex 24, was the highlight of this battle. We covered the 333 story earlier in the year. 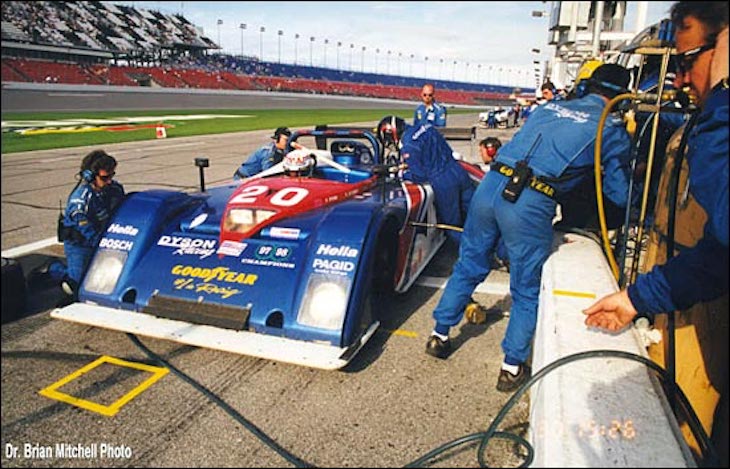 In 1997 it would be Dyson Racing’s turn to take the MK III to its second Rolex 24 victory. A second Sebring victory would be denied, although the margin to the winning Andy Evans Ferrari was less than a minute. However, the MK III was able to finish second & third in the 12-hour endurance classic. Just as the year before, the MK III would continue to be the car to beat. Wayne Taylor would soon move across to the Ferrari, and Dyson Racing would dominate MK lll achievements.

With a total of twenty podium appearances, wins at Road Atlanta, Watkins Glen, Sears Point, Las Vegas and Laguna Seca, and a championship for Dyson’s driver Butch Leitzinger, the season was complete. EFR and James Weaver completed a 1-2-3.

1998 would see some changes in sports car racing in North America. IMSA would now be known as Professional Sports Car Racing (PSCR) and a new series, the United States Road Racing Championship (USRRC), would begin. The factory Doyle team had left the scene, but several new teams including Intersport, Support Net and Jim Matthews, would race the MK III. Dyson Racing would enter their MK IIIs in both series, scoring wins in the PSCR events at Lime Rock, Road Atlanta & Mosport. That, along with four other podium finishes, would earn Butch Leitzinger a second championship. Laguna Seca also would be won by a MK III, but this race would go to a new challenger to North America, the BMW powered Rafanelli team. Over in the USRRC, Dyson Racing would take first place in four of the series’ five events and James Weaver would become the new series first champion.

Also in 1998, several European teams selected the MK III to compete in the FIA Sports Car Championships, then known as the International Sports Racing Series. It took until the final race of the season at Kyalami in the hands of the Solution F race team for the MK III to see victory lane. But throughout the season, Solution F along with Target 24 and Rafanelli, took the MK III to a total of nine podium finishes including a 2nd through 5th place sweep at the famous Nurburgring.

For 1999 the Rafanelli team took their R & S and headed across the Atlantic for the ALMS.

The Target 24 team stayed and was able to score three podium finishes with their MK III even though they faced an overwhelming contingent of very capable Ferrari 333SP teams that year. 2000 saw three more podium finishes for the MK III highlighted by a first place at Monza, but the pit stop rule in this series favoured the 333s – and engine reliability in some of the MK llls was a major handicap. R&M enjoyed considerable success with their Judd V10-powered car though, including that Monza win.

Back in North America, 1999 began with the USRRC once again sanctioning the Rolex 24 hours and Dyson Racing again in victory lane. That would be the third win in four years for the R & S chassis in this gruelling event. 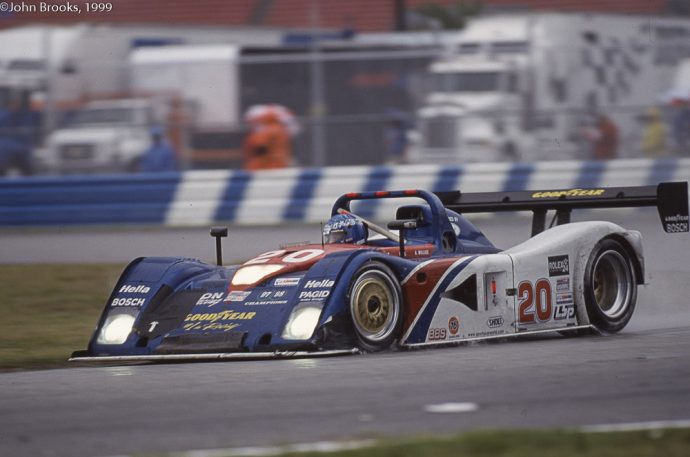 It would be an abbreviated season for the USRRC, as they would call it quits after just the third race of the season. More important than the death of the USRRC would be the birth of the American Le Mans Series. The first race for the new series would be the classic 12 Hours of Sebring, boasting one of the largest prototype fields in a long time. There were a total of eleven R & S MK IIIs, including new entries from George Robinson and Tom Volk.

Even against factory efforts from Panoz, Audi and the eventual Le Mans winning BMW LMRs, the MK III held its own. Team Rafanelli, now using a Judd V-10 and some very interesting bodywork modifications, was able to qualify second overall and set the fastest lap. In the end, one of the BMWs beat the R & S of Dyson Racing – by less than 10 seconds for one the race’s closest finishes ever.

Road Atlanta was the next race and Rafanelli again showed off his new combination of Judd power with the R & S chassis. They were able to set the fastest lap and secure the overall victory. But the real story of the year was Dyson Racing’s Elliott Forbes-Robinson. He parlayed consistent driving and the reliability of the MK III into the ALMS drivers’ championship. EFR, with driving assist from Butch Leitzinger and James Weaver, and the mechanical genius of crew chief Pat Smith, placed their MK III in the top four in five events, never placing below sixth. R & S consistency and expert preparation won out against faster machinery. 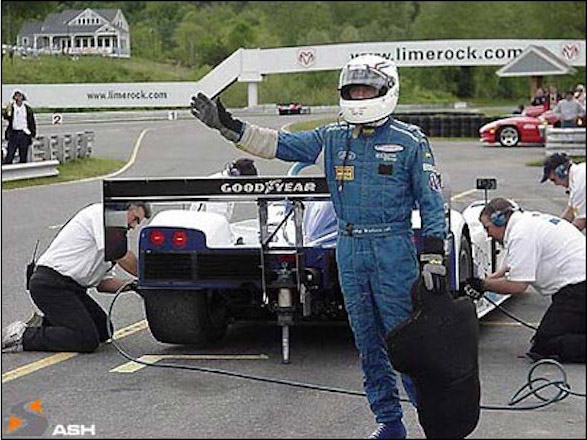 Because of Riley & Scott’s commitment to the new LMP program for Cadillac, the updates needed to keep the MK III competitive in the 2000 ALMS would not come. Although in the newest series, the Grand American Road Racing Association, the MK III would get a new life. The Dyson and Robinson Racing teams would combine to put the R & S on the top of the podium six times. James Weaver would win the drivers’ championship and Riley & Scott would win the constructors’ championship for the Grand Am inaugural season.

In 2001, the long-awaited updated version, the MK III C, made its debut in the ALMS. Meanwhile, in the Grand-Am the original MK III was still the car to beat. Dyson Racing scored five wins, James Weaver repeated as drivers’ champion and Riley & Scott was again the manufacturers’ champion. 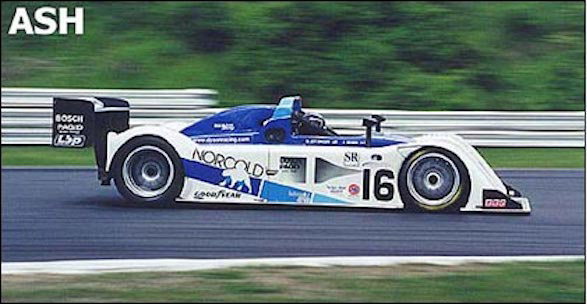 It’s now 2002 and the ageless MK III is into its eighth season of racing. Because of the upcoming rule changes in Grand-Am, this would probably be the last Rolex 24 for the MK III. Unfortunately, mechanical troubles hit both of Dyson’s cars and neither was able to finish the race. Dyson would continue with the MK III in selected races in both series. Although not as competitive as it once was in the ALMS, the MK III finished a very respectable fourth at Sebring. Ironically its fourth-place finish was one spot behind its own replacement, the “C”, entered by Jim Matthews – a car that Dyson Racing chose to sample and then spurn. They’d previously chosen to abandon the Reynard for their MK lll’s too. The Grand-Am series saw the MK III in victory lane four times, beating out the much newer Dallara chassis. 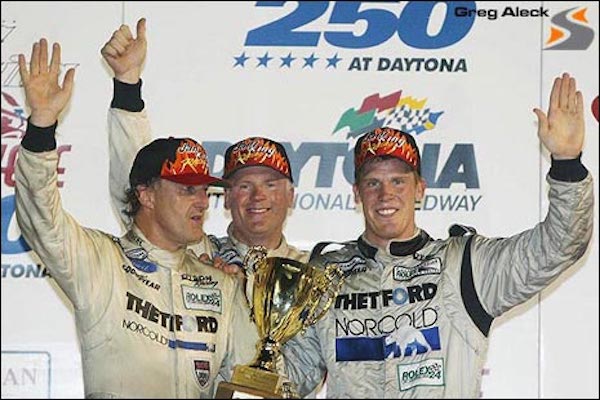 The upcoming Grand Am finalé at Daytona looks to be the swansong for this venerable racecar.

Over its eight-year career the MK III has taken on all comers. Aside from a few very well-funded factory efforts, the MK III has defeated and outlasted every other prototype introduced during its career.

Bill Riley tells us a great story to sum up this racecar. “I was at a race in 2000 with the Cadillacs, when an Audi engineer walked up to me, handed me a piece of paper, said ‘great car’ and walked off. The paper turned out to be a report from a wind tunnel test that Audi had conducted on an MK III that they must have borrowed from a European team.”