During Lockdown many of us have been undertaking tasks that have been on the to-do list for years!

Beyond that, we’ve been looking back into cupboards, boxes and lofts to alleviate the frustration and boredom of confinement.

Thankfully Nigel Barrett chose to look out his old photographs.

Nigel was a fan, who then became a racer, and a double British GT Championship class Champion in its first two seasons, 1993 and 1994 (below his 911 Carrera RSR from 1994 leading another car he raced later in his driving career the Blue Coral Porsche 935. 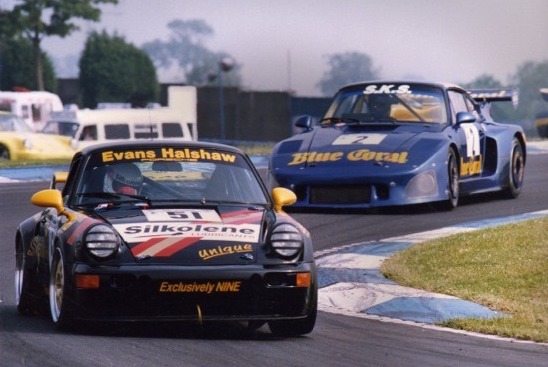 He continued to race until the end of that decade in a variety of GT Porsches including the 993 GT1, 911 GT2 and 911 GT1 in British GT, with the odd additional appearance in the FIA GT Championship too.

Before all of that though Nigel was a sportscar racing fan, who was never happier than proving the paddocks, grandstands or spectator banks looking for clear vantage points of the car he had travelled to see.

With thanks to Nigel for allowing us to present some of those images here, and to our friends at Racingsportscars.com for the data, here is the first of a series covering the Group C races that he attended and photographed.

First up, 1991, and Silverstone’s round of the World Sportscar Championship on 19 May 1991, the first season of the FIA’s new Cat 1 in Group C for cars with normally aspirated 3.5 lite V10 engines, amazing cars, but the beginning of the end for Group C!

The Silverstone race highlights can be found in amongst this now rather charmingly dated season review.