The BRM P351 sports car which contested the FIA Sportscar World Championship in 1992 failed to achieve its objectives, yet showed itself to be as fast as the Peugeot and Toyota works cars on the Mulsanne Straight at Le Mans. As so often happens to privateer teams with limited budgets, most of the testing was carried out in race conditions and it failed to impress.

John Mangoletsi, the originator and manager of the project, sets the record straight with his objective account of the BRM’s short career. Mangoletsi was a school friend of David and John Owen, directors of the Rubery Owen Group which owned the rights to the BRM name, and it was their shared enthusiasm that got the sports car project off the ground.

The BRM P351 was an ambitious sportscar project designed for the 1992 FIA Sportscar World Championship, run to Group C regulations with a maximum engine capacity of 3.5 litres. It was a closed, coupe-style two-seat racing car, as were its principal rivals from major manufacturers Peugeot, Toyota and Mazda. Only one chassis was built for the brief programme in 1992 as the FIA championship was on the point of collapse, through lack of entries.

A road-going sports car was announced as a spin-off programme, and BRM went so far as to make a clay model of the car which would have been named the P401, inferring a capacity of 4-litres from the BRM V12 engine. BRM designer Paul Brown completed the drawings and a full-size cockpit was manufactured by Motor Panels, roomy enough to accommodate BRM’s John Owen, who stood at 6ft 6in (2 metres) tall. However, with the ending of the race programme, the P401 project was shelved.

In 1990 an agreement was reached between John Mangoletsi, principal of the Airflow Management company in Cheshire, and the family of British Racing Motors (BRM) founder Sir Alfred Owen.

Paul Brown, the renowned racing car designer with the pioneering American Ford Probe IMSA challenger to his credit, and Zakspeed and Chevron on his CV had been employed by Airflow Management since 1988 and had undertaken a major update of the IMSA Porsche 962 for Porsche Motorsport North America (a programme that was cancelled following the death of motorsports director Al Holbert in an air crash).

Airflow Management was then commissioned by General Motors to design a prototype sports car for a Le Mans bid, but the serious 1990 slump forced the American company to withdraw from the project, leaving Mangoletsi with a part-finished project that was the basis of the BRM.

To be able to compete with the factory teams, close technical-commercial projects were established with the industry’s leading technology companies. These included Courtaulds, who built the carbon chassis and the attractive bodywork, Motor Panels, Ricardo Engineering and Norsk Hydro Magnesium. Input from Ricardo Engineering was of particular value as the Shoreham company was able to validate the integrity of the engine that would be chosen for the BRM. It was essential to minimise development time and costs and maximise performance and reliability in order to compete with the manufacturers.

Paul Brown, an Englishman, had the right credentials to impress David and John Owen. The agreement was reached for Airflow Management to design and construct a racing car to be known as the BRM P351 to compete in the 1992 FIA Sportscar World Championship. The project was intended to maintain the integrity of the BRM marque and to create a thoroughbred sports car that could compete against the big manufacturers.

A model of the BRM P351 was exhibited at the Autosport Racing Car Show in January 1991, and the complete car was unveiled in London’s Science Museum in November of that year.

However, the FIA’s sportscar championship was in serious difficulties at the end of the 1991 season with the withdrawal of Mercedes and Jaguar, and a number of private teams such as Kremer and Joest, with Porsche 962s that would no longer be eligible.

A ‘crisis meeting’ was held by the FIA in October, even before the BRM was formally announced, and it seemed that there might not be a World Championship for the British team to compete in. Sponsorship negotiations were put on hold, and the BRM project could only move forward again when Bernie Ecclestone reached an agreement with Peugeot, Toyota and Mazda that they would run two-car teams, and furthermore pay the FIA large fees to organise the championship in 1992.

An engine had to be sourced for the BRM, with a target output of 600 horsepower. Terry Hoyle and Graham Dale-Jones stepped up with their proposal to modify and develop the Weslake V12 engine, which would be badged ‘BRM’. This was agreed and Dale-Jones set to work, but soon realised that the Weslake was just too long and too heavy, to compete properly against the newly designed Peugeot and Toyota V10 engines, also the Judd V10 which would be adopted by Mazda.

To his credit, Dale-Jones virtually redesigned the V12 which actually exceeded its target, developing 620 horsepower on the dynamometer at 12,800 rpm.

“There is no doubt that the BRM is a serious project which deserves to succeed” commented Motor Sport magazine. “The BRM is probably a more race-worthy project than the Mercedes C291 was in its infancy.”

The BRM P351 made its debut at Silverstone in May 1992, the second round of the FIA Sportscar World Championship, resplendent in British Racing Green with BRM’s traditional dayglow orange nose band. Wayne Taylor and the Finnish driver Harri Toivonen were the listed drivers. 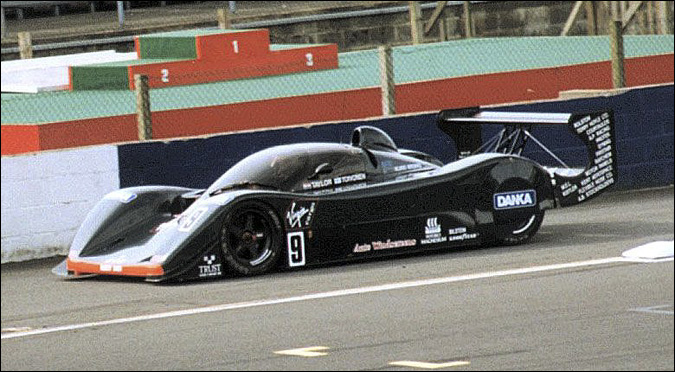 The BRM team had managed only a minimum of testing before Silverstone, 30 laps at Snetterton, as vital components were slow in coming through. The first problem surfaced during qualifying, in heavy rain when the alternator proved unequal to providing enough current to power the engine, the headlamps and the wipers.

After a difficult session, the BRM was given a place at the rear of the grid, but even that start was denied as the oil pump failed during the Sunday morning warm-up, and the car had to be withdrawn, to the huge disappointment of many fans who hoped to see the BRM marque squaring up to the French and Japanese factory teams. It looked as though BRM’s Silverstone jinx had struck again!

BRM had a month to prepare for Le Mans, the headline event in the World Championship. The meagre FIA grid was bolstered by a dispensation to the Automobile Club de l’Ouest to invite the Porsche teams back, and to introduce a ‘P2’ class which would boost the grid to 29 cars, still the smallest for many years.

BRM’s oil pump was modified and would cause no more problems, and a higher-capacity alternator was installed. That, too, would function properly, but the team was frustrated by the late delivery of the Klingenberg profile ring and pinion gear to be installed in the gearbox, a compact and durable component considered necessary for the 24-Hours.

Delivery was so late, by six months, that the component was delivered to the team only on Wednesday afternoon, one hour before the start of qualifying…without any bolts! As a result, the BRM was unable to get onto the circuit on Wednesday night.

Suitable bolts were manufactured by Xtrac in England and rushed through on Thursday afternoon, and Taylor was late out for qualifying, with Toivonen and Richard Jones waiting for their turns. After completing two installation laps Taylor reported that “something seems to be holding the car back”.

After adjustments were made Taylor recorded a time of 4m 03.186s for 23rd place on the grid, but could go no further as a bearing seized on the gearbox output shaft, denying Toivonen and Jones the opportunity to take part in qualifying.

In a show of sympathy and generosity, the ACO allowed the BRM to take the start in the 24-Hours. Hand timing by an observer in the Porsche Curves suggested that the BRM had been fifth fastest overall, indicating the potential of the P351. 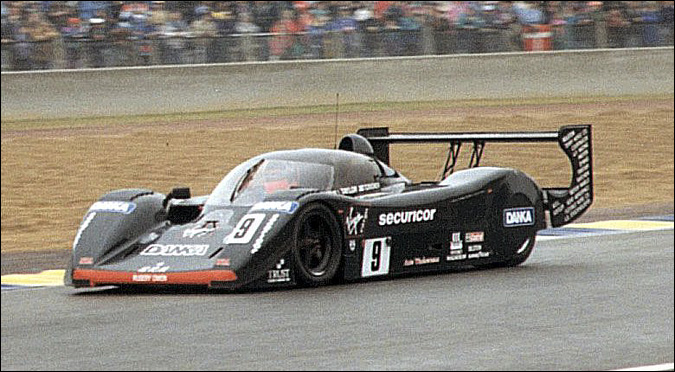 The BRM raced well in the first hour, Taylor pulling up to 18th position. He remained at the wheel until his second fuel stop was due and then rolled to a stop in the pit-lane unable to select any gears. The BRM was pushed to the garage where the gearbox was taken apart, carefully reassembled and the selectors adjusted. Since there had been so little running during qualifying, the data from the first hour was used to optimise the gearing and aerodynamics.

When Taylor rejoined the race the weather had turned nasty, with rain falling, and the timing screens showed that he was challenging the factory teams on lap speeds.

“The BRM had not waited for ideal conditions to get back on the track but that did not prevent its sole driver from stealthily demonstrating the green car’s potential” reported the ACO’s official Le Mans book. “With the Peugeots lapping at around 4m 10s to 4m 12s Wayne Taylor managed 4m 16.131secs. The euphoria was short-lived; five laps later, when he stopped to refuel, a small fire finally put paid to any hopes of moving up the order.”

“The dark green car ran competitively” reported the Daily Telegraph. “Comparatively untried and untested, the BRM showed signs of being a worthy contender.”

With the World Championship now in its dying stage, BRM turned their attention to the IMSA Camel GT Championship, rushing the P351 to Watkins Glen for the big 6-Hour race just a week after Le Mans. It was a massive effort for the small team, which presented the P351 for scrutineering with a new V12 engine installed, and a TAG alternator (“the best that money could buy”) supplying the current.

The team immediately hit a problem as the height of the air box exceeded IMSA’s dimensions, and Brown had to make a hasty modification to lower it.

The BRM was unable to take the start, and the team returned to England with feelings of despair.

It took two days of testing at the Bruntingthorpe airfield to establish that the TAG alternator was, in fact, faulty out of the box, overcharging and causing the ECU to shut the engine down to avoid damage. It would then reset itself and diagnostic analysis could not detect the problem. With the FIA championship virtually at an end and no replacement in view, the BRM sportscar project had to be abandoned.

It was sad for the greatest era of sportscar racing and the BRM P351, which never had a chance to realise the potential it had shown.

To satisfy the team and all the industry supporters, team manager Ian Dawson carried out a 1,000-mile test to prove the true capabilities of the P351. A new camshaft profile was developed to address the only observation in all of Ricardo’s tests that valve spring surge could occur between 10,500 and 11,000 rpm. By this time all the relatively minor problems that had been encountered, primarily with bought-in ancillary components, had been resolved and the car ran faultlessly.

The BRM was returned to Rubery Owen who kept it under wraps for three years, until an agreement was struck with the Pacific Racing team to make a new race programme at Le Mans and in the International Sports Racing Series (ISRS) which, fittingly, had been founded by John Mangoletsi to fill the void in sportscar racing. This went on to become the FIA Sportscar Championship. 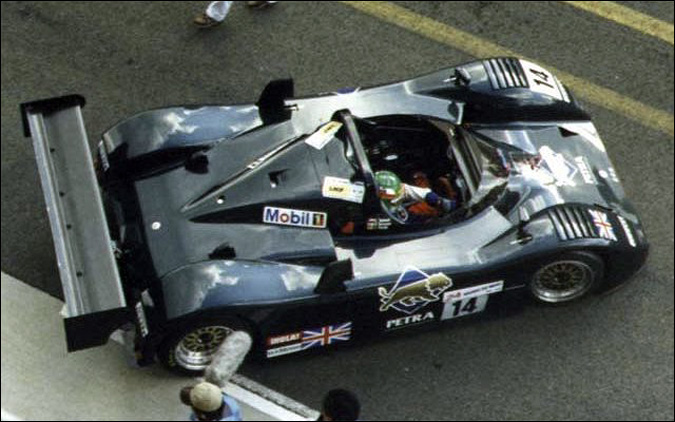 BRM retained the naming right for the car, which was raced in 1997 in open-top form as the P301 with a Nissan origin BRM 3-litre, V6 twin-turbo engine.