Back in 2012 DSC feature writer David Greenhalgh made the most of a chance to sit down with one of the most significant Mercedes drivers in the brand’s history, Bernd Schneider. At the time Schneider was in Sydney to drive in the Australian GT Championship amid one of his many years spent around the world for the German brand.

The chat covers a variety of topics surrounding his storied career in sportscars. It’s well worth revisiting…

Schneider was a Ford youngster from 1985 to 1991. He remains very grateful for the support from the company, especially as for some of that time he was racing a VW-engined F3 car!

He raced in Formula 1 with both Zakspeed and Arrows without a great deal of success. “I was contracted to Zakspeed, and at end of 1989 I said I don’t want to drive any more for them. I talked to Erich Zakowski and said I want to quit. But I had a three-year contract. Jochen Neerpasch, Mercedes motorsport boss, contacted me and said: ‘yes I’m going to do it, there will be a German sportscar team’: Jochen Mass and myself in one car and the other car would be Jean-Louis Schlesser with Mauro Baldi.

“I said it would be great driving next to these guys, I’ll really enjoy it – but Zakspeed wouldn’t let me out of the contract. ‘If this does not happen,’ they say, ‘then we take the young drivers Frentzen, Schumacher and Wendlinger.’ This was such a shame – this was November, then in February Zakspeed quit Formula 1 and I got the offer from Porsche. Everything maybe would’ve turned a bit different – I don’t complain, I just say it would have been different.”

Some appearances in Kremer Porsches in 1990 were followed by an offer from Joest Racing to drive a Porsche 962 in Interserie races in Europe and IMSA in America, in addition to outings at Le Mans, Daytona and Sebring.

He says of the 962 that: “it was a very dangerous car, but very powerful. In the States we had the restrictors but we did a couple of World Championship races, and in qualifying – 1100 horsepower, 900 kilos – I enjoyed this car very much.” 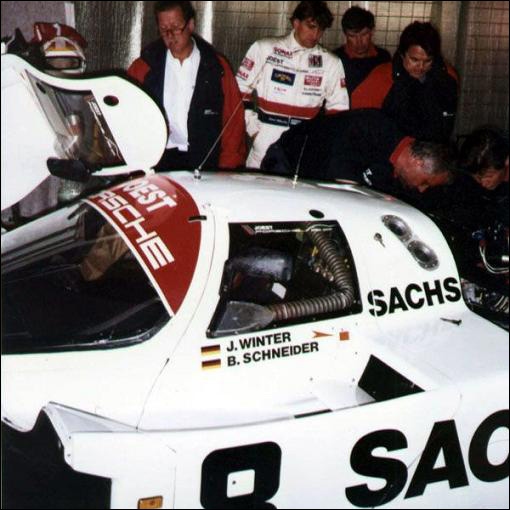 Not surprisingly, he was neither the first nor the last driver to be impressed by this famous team: “I really enjoyed Joest Racing, it was very professional and a semi-factory team. We really had good days and even though we were not fighting for the Championship it was good enough. We could win some races and fighting for podiums and I really enjoyed the races over there, but Norbert [Haug] said, “No! Stop it now, it’s too dangerous, I don’t want to lose another friend”. (Haug had been very close friends with Manfred Winkelhock, who was killed in a 962 at Mosport in 1985.)

“Then I replaced Schumacher in DTM because nobody knows that he did DTM in those days, so when he came in Formula 1 there was a seat available, and Porsche said ‘yeah, you can do it if you want’ so I replaced him for the last four DTM races, then Norbert announced at Hockenheim that Schneider is with Mercedes now – even though I had no contract!

“This was the way everything starts, but honestly, as a German there’s something special about driving for Mercedes: the inventor of the motor car. No other manufacturer has such a history like we have. A lot of people have forgotten this but when you come to our museum and see the history, not only in road cars but also the motor sport side, what we have achieved and what we have done in the past, it’s first-class work and I’m really, really happy being part of the family.”

After five successful seasons driving touring cars for Mercedes in the DTM and ITC, Schneider moved with the marque back into sports cars in 1997, after the collapse of the DTM.

“The 1997 car [the CLK GTR] when I became World Champion in GT1, I really loved this car, V12 engine, big torque – I just loved it. Even the ’98 car was much quicker with the V8 engine, lighter and better handling but the torque and the sound of the V12 was awesome. The ’97 car wasn’t the quickest car we had because the ’98 and ’99 cars were much quicker but ’97 just suited to my driving style. 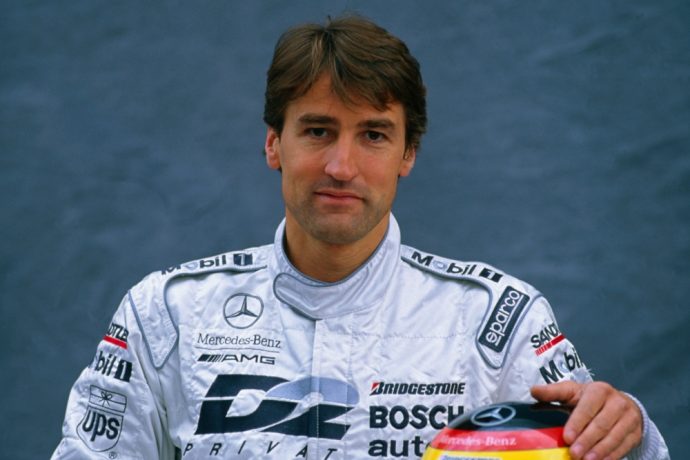 “In 1998 it’s still a little bit disappointing that we [Mark Webber and I] didn’t win the championship because we were so close – we were leading a couple of races and we were just unlucky. I remember at Dijon we was miles away from Zonta and Ludwig and then Mark in his stint collected a nut which goes between the wheel and the brakes and cut the wheel off – we had to change tyres and we lost first place.

“Then in the last race there was a little game that Klaus Ludwig played. He made the tyre test and said yes, the soft compound we can’t use because it’s too soft. Normally Ricardo Zonta and myself were using the hard tyres, with Mark and Klaus taking the soft ones. But Klaus says, ‘no, the soft one doesn’t work’, then Mark had to run the hard ones and Klaus got the soft ones on – and then we lost the Championship. Just unfair playing, but we never announce it very much, but there were many factors in losing the Championship. Mark and myself are still disappointed about it.” 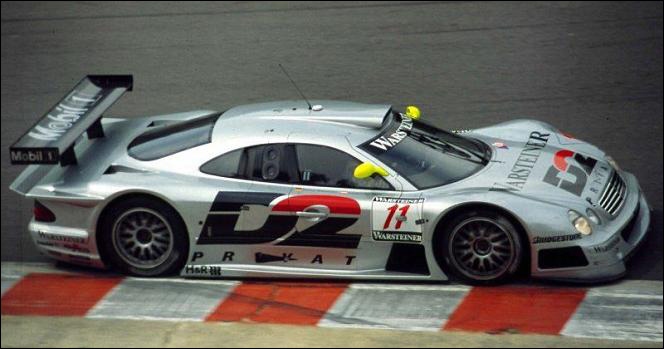 As is well known, Mercedes suffered drastic aerodynamic problems with their CLRs at Le Mans in 1999, Webber taking flight in spectacular accidents in both Thursday qualifying, and in the race warmup on Saturday morning. The team then had a meeting to discuss the situation, but Schneider’s position was clear: “I was the guy who said, ‘come on, we race’. I’d never had any problems and we found the reasons why this happened to Mark’s car and then we thought to be on the safe side, put more downforce on and then we are safe – but we weren’t safe.”

On Saturday evening, in one of the most dramatic motor racing accidents ever captured on film, Peter Dumbreck lost downforce when following a Toyota through the last kink before Indianapolis, and cartwheeled his CLR high over the fence and into the trees. Schneider: “I had just finished my stint and changed and then I heard ‘safety car’ and I thought, OK safety car. But then my team-mate Franck Lagorce came in and said ‘Oh, Peter flew, Peter flew into the forest!’ I said, ‘what are you talking about, how can he be in the forest?’ and then I heard that Peter was OK and I was more relaxed. Then I saw the pictures and thought, ‘how can he survive this?’ 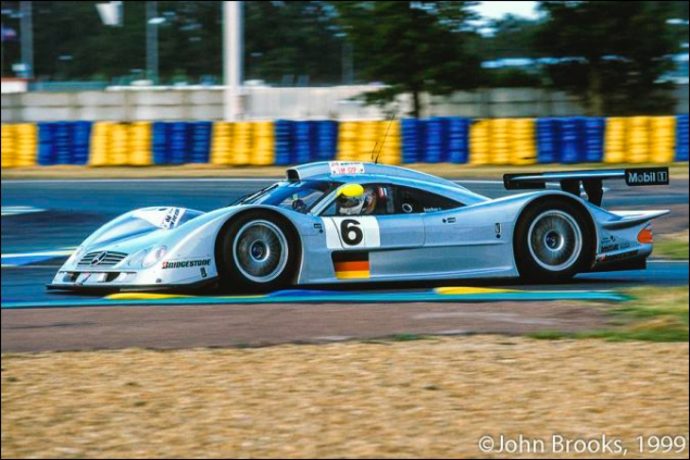 “He missed the concrete post by one metre, then the advertising bridge from Bridgestone, he missed by two metres, then he flew in the forest. The French just one week before had cut the trees off and he landed on the stem of the tree, and the stem came in on the passenger’s side through the floor.

After this third aerial misadventure, Schneider has no doubt that Mercedes made the right decision in pulling their last car – the one he shared with Lagorce and Pedro Lamy – out of the race. “Of course, every manufacturer who races there has the risk because every one of them flew but especially from Mercedes’ side after the history of 1955 if someone was killed there, one hundred percent sure we wouldn’t have any motor sports. It can happen – in motor sports, if you go over 300, something can happen, but not in the way at Le Mans, and not with the history we have.

“With these kinds of cars, it can happen – you can’t avoid it, and it’s one of the reasons we stopped the whole programme.”

However, he says that the Le Mans disaster was not the only reason that pushed Mercedes away from sports cars and back to the reborn DTM in 2000. “I think there was before [Le Mans] already the discussion. In the beginning we thought maybe do two programmes like Audi did – sports cars and DTM – but afterwards there was no doubt anymore. We were really happy that the programme starts with DTM in 2000.”

Involvement with AMG and the GT3 SLS

Schneider had some regrets to be leaving sports cars in 2000: “I was a little bit unhappy when they said we have to go back to DTM: less horsepower, less downforce, smaller tyres and I said, ‘Oh OK I do it’ but I was not crazy happy to be going back.” But this generation of DTM cars was seriously quick and fun to drive – he says they are 1.5 secs per kilometre faster than a GT3 car – and he immediately launched into an extraordinary run of success.

He won the title in 2000, 2001, 2003 and 2006. Then: “at the beginning of 2007 I was already thinking to retire, the boss of AMG came up to me and said, ‘Listen I want to do a real sports car – we got from Mercedes permission to do the SLS. I want you to do the development from the first day to the end because this car must feel comfortable and must be at home on the racetrack and also the road. This must be a real impressive sports car, and you’re the right guy to do it’.

“I said OK – I thought this is the end of my career, and I was going to finish anyway, and this was a good start, this was my first thing. I’m still doing it as an AMG ambassador, I help with the development of their new cars, I make all the press presentations with them.

“In 2010, we started the development of the GT3 programme, I was there from the beginning. You know, each button and everything is set by Thomas Jäger and myself, the drivers have to be comfortable to reach the buttons, we have good airflow and all this stuff. And of course, set-up wise they must be easy to drive for gentleman drivers. 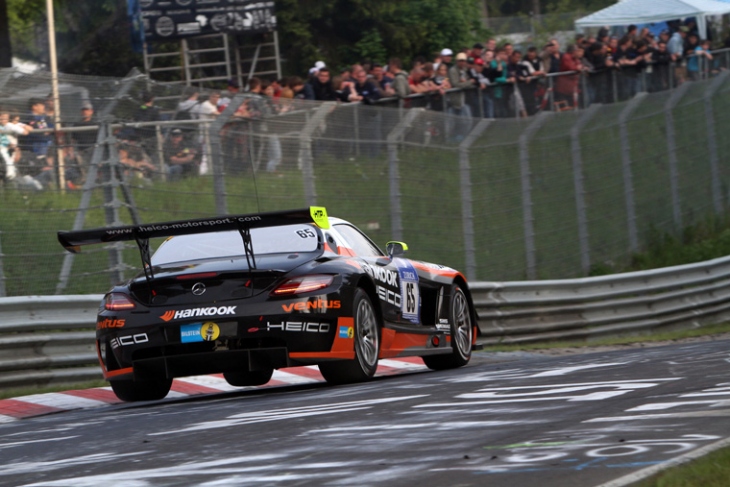 “It was a big issue because Mercedes didn’t have customer motor sport so we not only had to build the car we also had to build up the whole service around the cars, the customer programme, like how can we support them at the racetrack with the mechanics, the engineers – everything we had to grow from nothing. It was a big, big effort to do and we are very proud that we achieved in such a short time such good results.

“We sold many, many cars around the world, and then it starts that the teams ask a little bit to come and support them by driving. Thomas and myself we know the car very, very well and that means we know what to do and if we go to the teams during a race we also try to support them with how to handle set-up. If they are young drivers, we look at data with them to improve their driving and skill levels. We have the philosophy that we are not racing our teams, we are not a factory team, it is only customer motor sport so our philosophy is: we are winning with the customers or we do not win.

“This year I did Dubai, Nürburgring (above), Spa and did some VLN. When I won the last VLN race with Black Falcon, it was my first win at all in the SLS because I made so many races but I didn’t win a race so far. My boss called me ‘Congratulations, first win’. ‘First win? Was a long time ago’. ‘No, first win in our car- finally you made it.’”

It has been a remarkable career.