Changes were the order of the day for 1991 in Le Mans. There were new pits and main grandstand, only those who worked in the cramped and unsanitary conditions of the old establishment could truly appreciate the improvement. 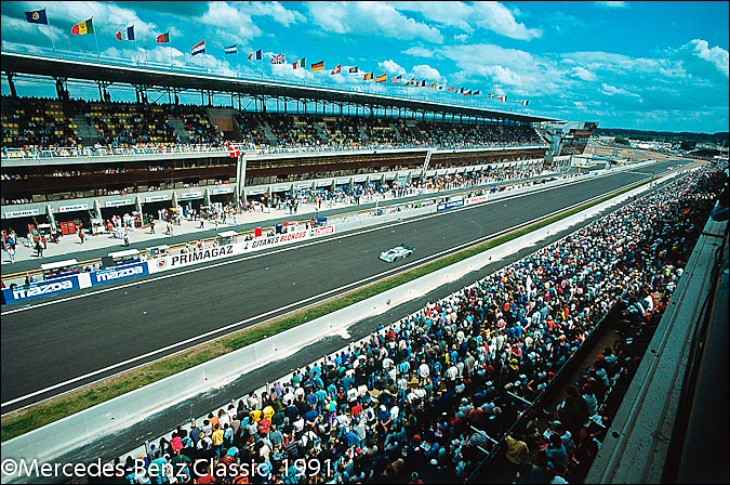 Combined with the chicanes that had been introduced down the Mulsanne Straight the previous year, the effect was to take the track out of the 1950s and towards a new century. Some things remained constant, though, and Jean-Marie Balestre gave his usual hysterical performance at his Friday FISA press conference, at one point calling the place a ‘goat track’. This went down like a lead balloon with the locals who had just hocked themselves to the eyeballs (£20 million) to satisfy the rule makers. Behind the scenes there was much arm wrestling about the future of the rules and of the great race, all of which would emerge later.

As the grid lined up it was clear that it gave a false perspective to the prospects for the race. Peugeot may have been at the front, grabbing the headlines and the TV ratings, but it was clear that Sauber were favourites to win. Unlike Jaguar, they had experience of racing the C11 at the 1000kg level; Schlesser and Mass were, at that point, leading the Drivers’ Championship and the car had been developed in a proper Mercedes fashion. In contrast, Jaguar were at sixes and sevens with the ballasted XJR-12s; they handled like pigs and were drinking petrol like sailors on shore leave – to get to the finish on the allocation of fuel, the drivers would have to go into economy mode. With Peugeot’s fragility well known and Jaguar’s lack of pace and economy, where would the challenge to Stuttgart come from? Mazda? No, don’t be ridiculous. 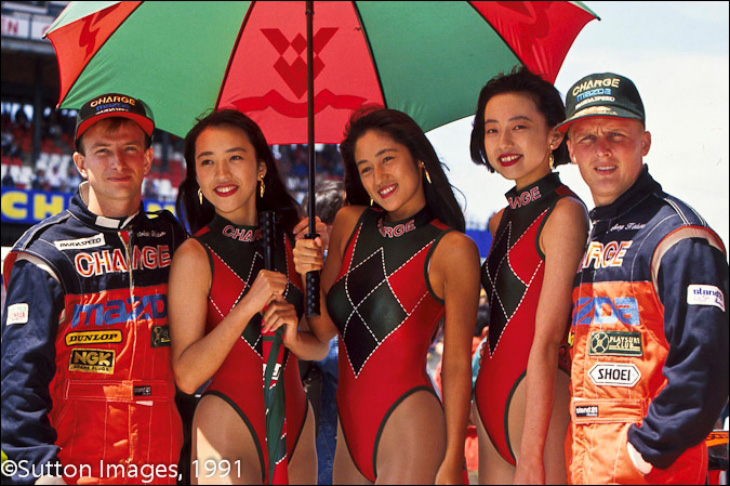 At 4.00pm the Drapeau Tricolore was waved at the Peugeots heading the field. Alliot and Rosberg scurried off, leaving Schlesser to battle his way through the mob and that’s the way it remained for ten laps. The first pit stop for Alliot was dramatic, the 905 being engulfed in flames; and though this was promptly extinguished, a couple of minutes were lost. 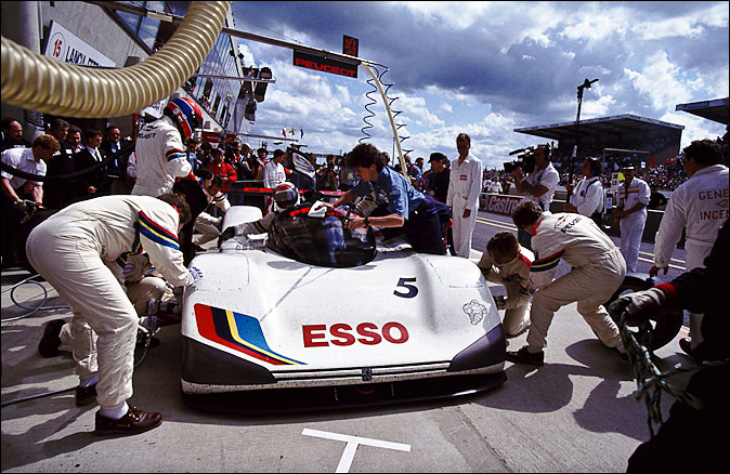 Oscar Larrauri and Bernd Schneider, in a couple of 962s, had refuelled out of sequence and headed the three C11s, chasing Dalmas in the leading Peugeot. Yannick then pitted the 905 with an ignition problem, eventually having the entire wiring loom replaced and effectively removing the car from the race. 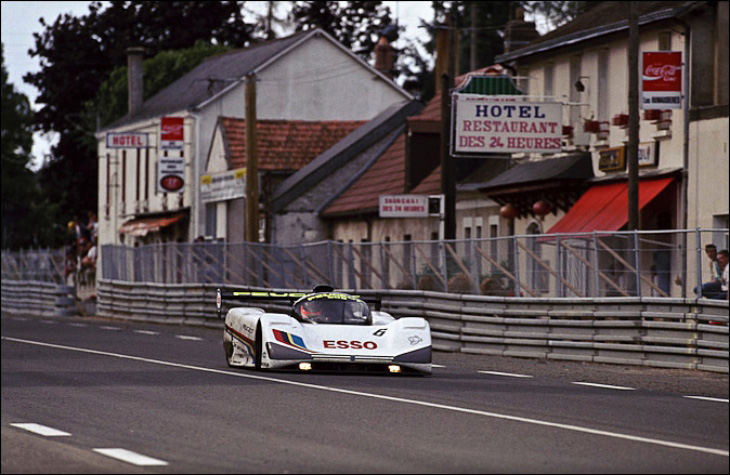 More bad news for Jean Todt’s men came soon after, with Jabouille stopping at Indianapolis; the 905 having suffered engine failure. Glory would have to wait for another year.

Then came the Porsches and the Mazdas, with the Jaguars – lost for outright pace – following on. The largely unknown Michael Schumacher was posting some fantastic lap times, setting a new record of 3:38.528, then his team mate Karl Wendlinger tried too hard on cold tyres and spun; repairing the rear end damage cost two laps.

As night fell, the three Saubers headed the leading #55 Mazda. 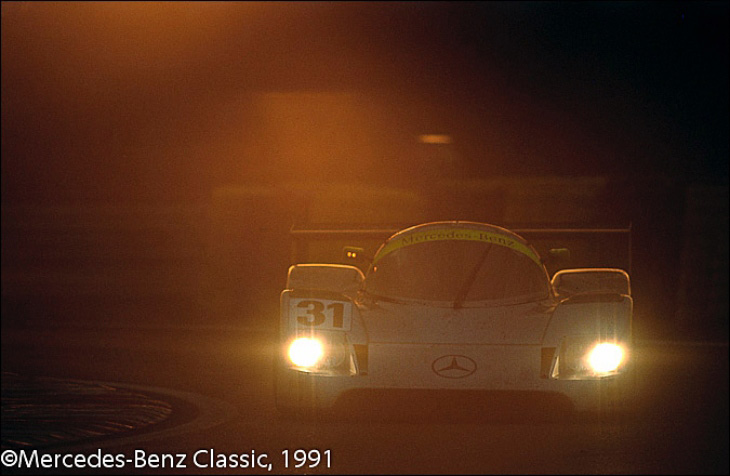 The best of the Porsches, the Brun example with Oscar Larrauri, had at one point risen to third place, but suspension failure – a consequence, it was suggested, of the excessive weight – took six laps to repair. The best of the Jaguars, #33, had big spins in the hands of both Derek Warwick and Andy Wallace, dropping them down the order behind their team mates. 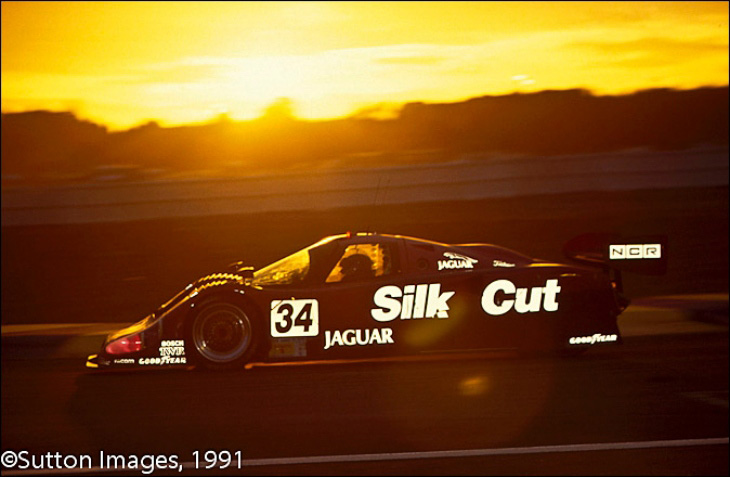 The halfway point was reached with the Saubers running first and second. Schumacher, playing catch up, had carved another three seconds off the lap record to leave it at 3:35.564. The #55 Mazda was now third, running like a train.

However, the first problems had hit the Mercedes team. Stanley Dickens ran over some debris on track and repairing the floor lost ten places, but there had also been damage to the engine mounting and the vibrations caused an eventual failure; one down. This became two when #31 got stuck in fourth gear. Two stops cured the problem but cost the trio nine laps; they would be seven down on the winners at the finish. 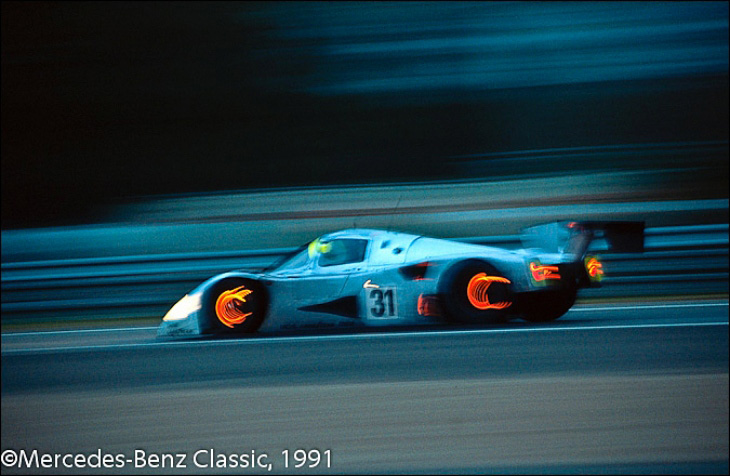 As dawn broke, the #55 Mazda upped the pace in an effort to see if there were any further weaknesses that could be found with the remaining Sauber. 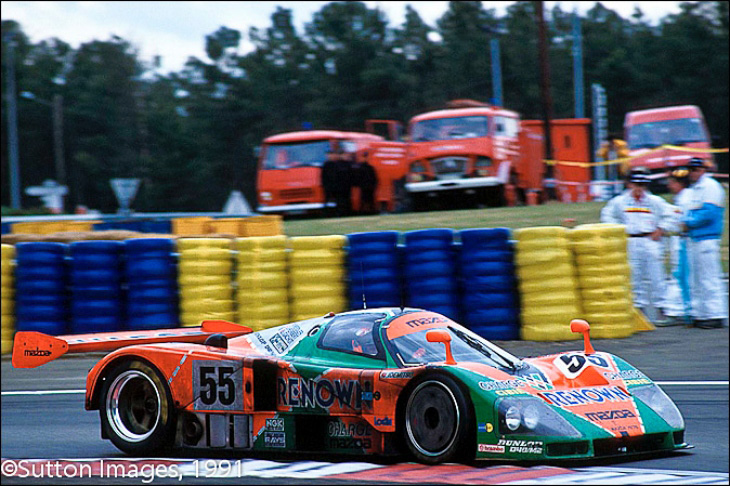 All the hard work of the youngsters in #31 while chasing the leaders was lost when the alternator mounting broke, damaging the water pump drive belt. A few hours later the same problem happened to #1, Ferté arriving mid stint at the pits with the engine bay steaming. He had driven for almost a lap to get the C11 back for repairs but that was sufficient time for the engine to cook and, despite holding a four lap lead, the Sauber Mercedes was out. Mazda was in the lead; incroyable! 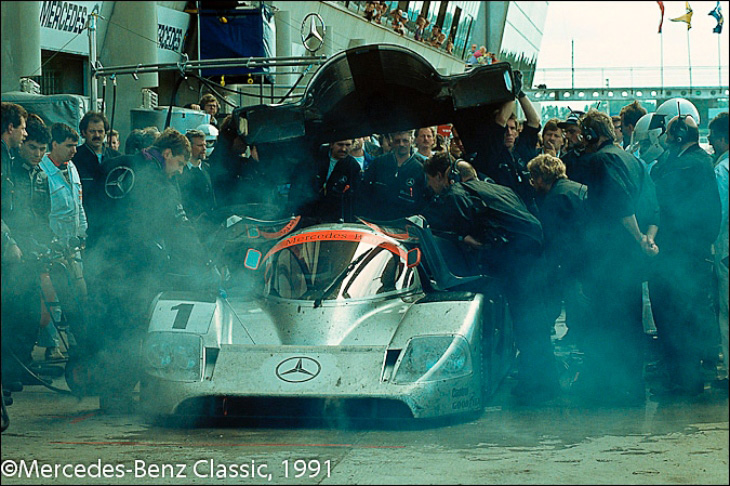 The final three hours ticked by with the Mazdaspeed team scarcely believing what was happening, but they were going to win Le Mans. 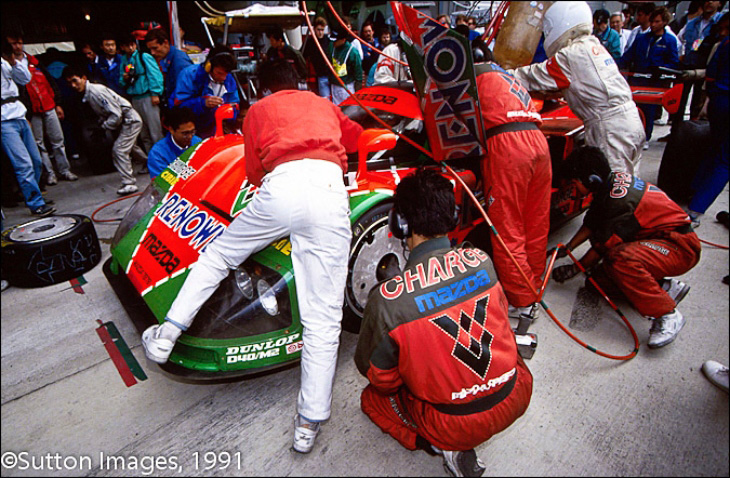 The crowd invaded the track just before the finish, prompting the French to enact a law to make such an action a criminal offence. 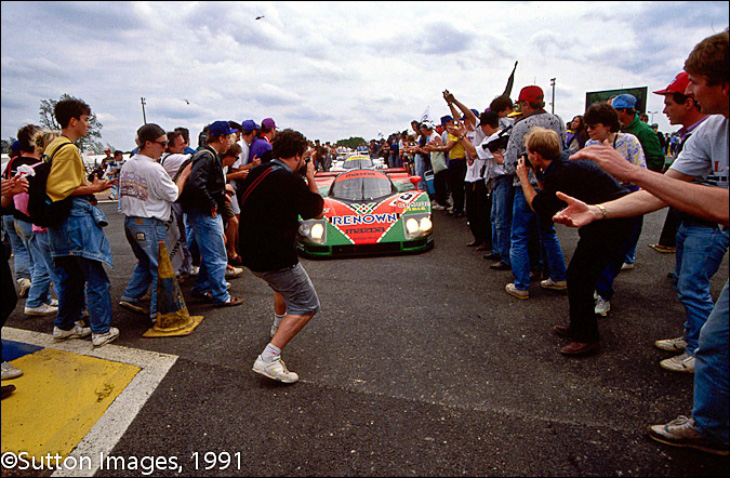 Johnny Herbert did not make it to the finishing line, nor did he get on to the podium. He collapsed after getting out of the car somewhere near Arnage and was taken off for medical attention. 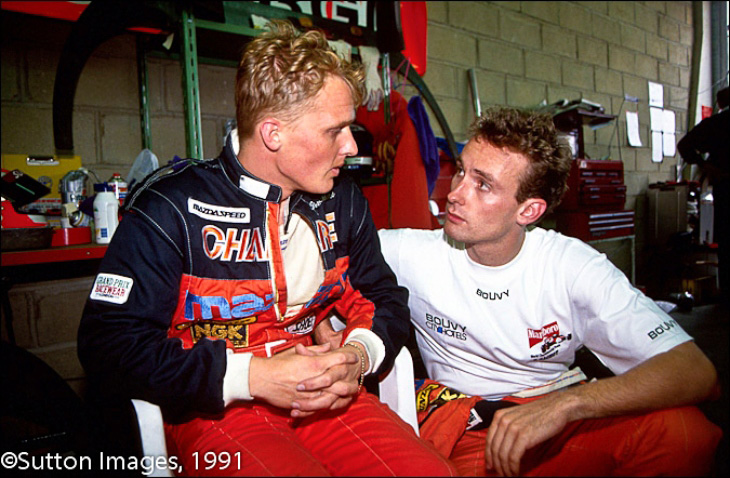 The Mazda 787B had completed 362 laps and there were few (with the exception of the #1 Sauber crew) who did not think they had deserved their victory, it was a very popular result. 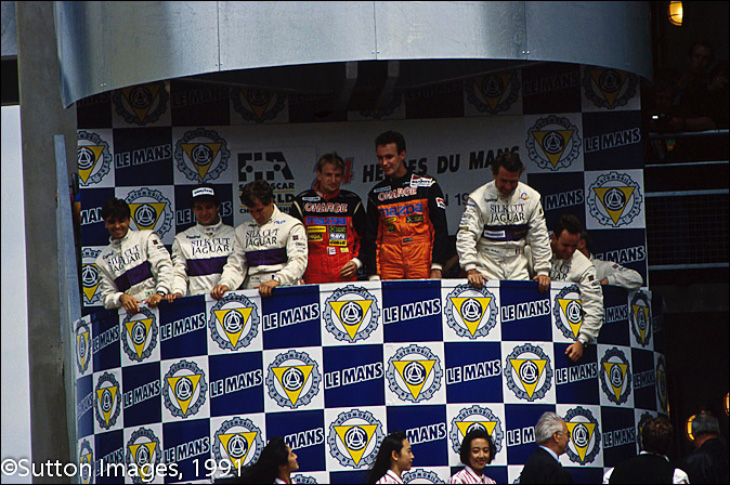 While never in contention for victory, Jaguar salvaged something from the race by finishing second, third and fourth (#35, #34, and #33), and gaining important points in the Teams and Drivers Championships. Sauber Mercedes were left to reflect on what might have been; missing the race in 1990 probably cost them victory in 1991. Peugeot had an eye on the future.

Mazda? They could celebrate. The first, and to date, only win for a Japanese manufacturer at Le Mans. This year the 787B will be back on track, and at the Friday Parade; go along and give it cheer. 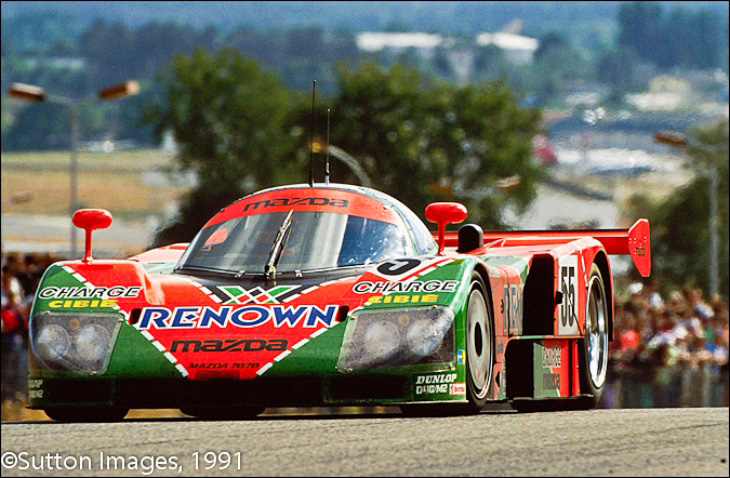