DSC Retro From 2012, with thanks to Sam Smith

48 years today Jo Bonnier was killed in a shocking accident during the Le Mans 24 hours. A distinguished and almost regal character was lost after a highly distinguished career in both Formula One and sports car racing. 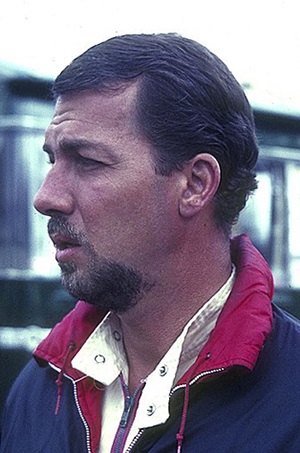 Many were close to the tall, bearded and imposing Swede. His peers, employees and contemporaries spoke and still to this day speak highly of Joakim Bonnier. Chris Craft, Reine Wissel, Heini Mader and Gerard Larousse have all recalled their affection for the highly organised, diligent and studious versatile racer. Another well respected colleague of Jo’s, former Cooper, Marcos and Lola designer, Bob Marston sat down with me last week to reminisce about his memories of working with one of the very best so-called ‘Gentlemen racers’, whose remarkable career spanned three decades.

“The first time I met Jo was at the British Grand Prix at Silverstone in 1967, “ remembers Marston, who at that time was cutting his engineering teeth with Cooper Cars. “We had Siffert and Rindt too (Seppi was in a Rob Walker Cooper and Jochen in a works car), so he was more often than not fairly comprehensively outpaced by the young lions in the Maserati engined T81’s.”

“Although he was at the tail end of his F1 career he was still very keen to work with the likes of myself to try and find more pace in the car. It sounds strange now because it is a given these days that drivers consult the engineers within a team. However in the 60’s some of the drivers just turned up, drove and then went off chasing girls or whatever! Jo was certainly not from that crowd. Not at the circuit anyway!”

Bob was thrust in to the limelight at Silverstone after regular engineering chief and designer, Derek White was taken ill. The late Roy Salvadori was undertaking team manager duties while a young mechanic by the name of Ronald Dennis got busy with the spanners! Bob was in his element and the charismatic Bonnier had a lasting impression, one that endured until the two worked together again five years later as the Swede continued his career in sports cars.

“After that I really got to know Jo much more at the start of that fateful 1972 season when we went to Buenos Aires and Daytona. Our drivers were, if I remember correctly, Reine Wisell, Chris Craft, Gerard Larousse and Jo himself. We were running two of the new 3-Litre Lola T280’s against the works teams of Ferrari, Alfa Romeo etc. Since almost all of the cars originated in Europe, transport aircraft had been chartered to bring the cars to Argentina, which was okay – until there appeared to be some problem with the unloading and delivering of our cars to the circuit, ready for practice. “ 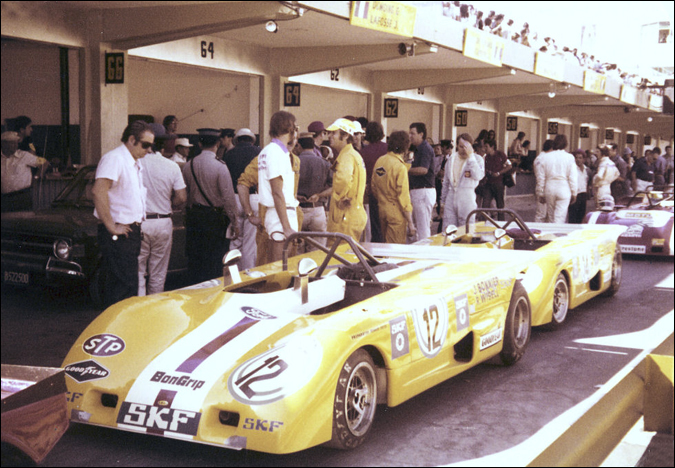 The promised delivery times came and went with no sign of the yellow Bonnier cars arriving for an impatient Marston. In the meantime, some of the other teams were, very frustratingly for us able to start their practice. Considering this needed a bit of sorting out, Bob took Jo Bonnier’s secretary, Anne-Marie (who spoke good Spanish) to the Airport to see what could be done!

“Anne-Marie got into conversation with a customs official and persuaded him to allow us to go out of the back door (highly illegal) and get airside so that we could locate the relevant aircraft,” recalls Bob. “We eventually managed this only to find that the unloading crew had disappeared for some unexplained reason without any indication of when they may return.

“We waited until eventually they returned and after some persuading the unloading began, that is until we found there would not be room on the transporter for our cars on that trip. Clearly more time would be lost, as they would have to return after delivering their present load to the circuit. I elected to stay with our cars on the tarmac beside the aircraft, whilst Anne-Marie went back the way we had come in. By now, it was getting dark and here I was completely alone, unlawfully in a restricted area, no papers or passport, unable to speak the language – it suddenly occurred to me that this was not a very clever situation to be in. Especially in a South American country where the prisons are reputed not to be high on Thomas Cook’s list of must-see places.

“Eventually the transporter did return, several hours later, but to get out of the airport through security I was hidden away in the locker under the bench seat in the cab that had three big Argentinians sat on it, and it was thus that I escaped from a very tricky situation. At least I feel I now have a degree of empathy with our own modern-day illegal immigrants!

Jo Bonnier held a special reverie over all those he met. Many felt that he could be pompous but not Marston, who explains an almost otherworldly tranquillity to the mans personality.

“I think it was after the Buenos Aires and Daytona double header that I went to his house for a few days which was right up in the mountains near Gland in Switzerland. Jo was slightly curious in the sense that he didn’t seem to have a very British sense of humour but he was very pleasant and engaging in his own way. I remember that when we got to his place there was one of his actual McLaren M7C F1 cars bolted to his living room wall. That gives you an indication of how big his living room was!” 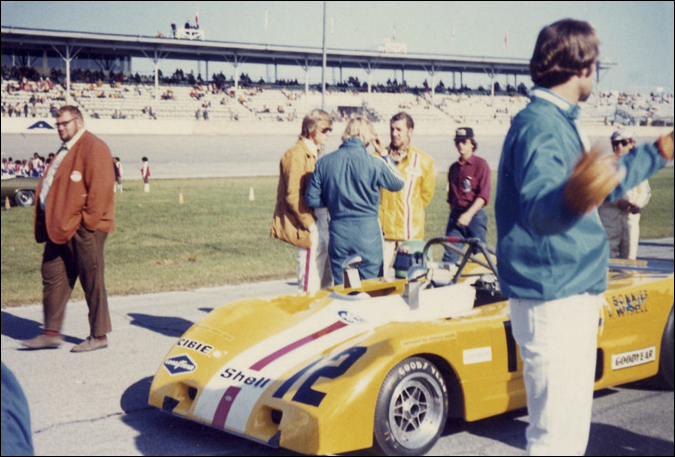 As a perfectionist, Jo was also particularly unamused by his pet Alsation having relieved itself against his trophy cabinet, which much to the amusement of Marston, was met with embarrassed silence by the mast1er of the house!

“That was awkward,” remembers Bob. “But after that difficult entry in to Chateau Jo-Bo, it became a delight and I got on very well with Jo, who along with his wife Marianne, were the perfect hosts. They were actually a wonderful couple who were loving their lives in the fresh mountain air and I thoroughly enjoyed their company.”

As with so many drivers from this era there was to be a terrible end to the perfect lives the Bonnier’s had carved out for themselves. At just after eight o’clock on Sunday morning at Le Mans, Jo was approaching Indianapolis in his yellow Lola T280. A privateer Ferrari Daytona driven by Swiss amateur Florian Vetsch was also about to brake for the left hander. There was contact and the Lola was sent in to the trees, upon where it was completely destroyed. Despite the best efforts of the heroic Vic Elford, Jo who had campaigned along with Jackie Stewart and others for better safety and medical facilities at race tracks the world over, was dead.

“I have never seen Eric Broadley so upset as when he came in to work that Monday morning and told me about the accident,” says Marston. “Eric was close to Jo, they were similar ages and in fact probably quite similar characters in a way. It hit him really hard.”

Bonnier, the first Scandinavian to win a Formula One race has left a legacy as a pioneer of great talent coming from Sweden and its neighbouring countries. More than that, Jo Bonniers record of success is much more worthy than the label of ‘Gentleman racer’. Sebring 12 Hour, Nurburgring 1000kms and Targa Florio victories were earned in the 1960’s and the racer/team owner fully deserves not only our tributes this week at Le Mans but also our utmost respect as a terrific racing driver, team principal and entrant.

Who was Jo Bonnier?

Heir to the Bonniers Aktiebolag publishing empire
Studied languages at Oxford University in 1949
Started racing on ice in Sweden in 1950
Made Grand Prix debut at Monza in a Maserati 250F in 1956
Won his one and only Grand Prix at Zandvoort in 1959 driving a BRM P25
Remarkably the Zandvoort race was the only time in his 103 F1 starts that he stood on a podium
Won 1960 Targa Florio in a Porsche RSK with Hans Hermann
First ever head of the GPDA (Grand Prix Drivers Association). Campaigned for better safety in motorsport.
Won 1966 Nurburgring 1000kms with Phil Hill in Chaparral
Formed Ecurie Bonnier in 1966. Raced in F1 and sports cars until his death in 1972