Some of your questions answered:

How were the entries decided upon?

The selection for this race was not linked at all to the selection for the real 24 Hours of Le Mans instead the decision was taken to attempt to bring together the best of racing teams and esports squads, hence the non-inclusion of a number of familiar names from the WEC, ELMS and Asian LMS. The selection was made by a committee representing both motorsport and esports.

How are teams made up?

Each line up consists of 4 drivers. Each must contain at least 2 professional drivers with an International FIA licence or equivalent. The other two can be either sim racers or professional drivers. As in the real 24 Hours of Le Mans, drivers are not permitted to drive in more than one car.

A 50-car grid has been chosen to keep the online services as stable as possible, though difficulties have been experienced in the practice races with additional racing sessions programmed as a result.

With 200 drivers from all over the world joining the race, many of them in their home environment and not together physically with their team-mates, the communications and online challenges are very considerable.

What cars are available for this event?

There are two classes of car in the race, LMP and GTE. There is one LMP model based on the ORECA 07 LMP2, and four GTE models: Aston Martin Vantage, Corvette C.7R, Ferrari 488 GTE and Porsche 911 RSR.
Car numbers for the LMP class are between 1-50 and for the GTE class between 51-99.

Just like in real life, teams are free to design their own liveries, with a few areas being left free for official partners (such as windscreen banner).

What ESports/ Gaming platform will this be run on?

The event will be run on the rFactor 2 platform which offers advantages including driver changes, dynamic weather conditions, dynamic day/night transitions, multiclass racing (LMP and GTE).

How much practice have teams and drivers got?

Each driver must have taken part in at least one of the three test races (held in the two weeks before the race) in order to familiarise themselves with the game, the rules & procedures. Drivers must complete a minimum of 10 laps (including a min of 5 full timed laps, whilst the 5 other laps can be pits out – pits in loops) during an official Test Session or Test Race.

There are four free practice sessions available between 9th – 12th June but they are not mandatory. They are open pitlane sessions and one person per team may compete at any time when the pitlane is open.

In reality, many drivers will have completed many, many more laps than this in their own standalone session. One driver spoken to by DSC this week was approaching 600 laps in preparation.

How does qualifying work?

A 20-minute qualifying session will be held for GTE cars only on Friday, 12 June from 18h10 to 18h30, and 20-minutes for LMP cars only from 18h40 to 19h00. The team with the lowest time will start on pole position and the highest time will start in last place.  The starting grid will be split by class so that the top GTE car will start behind the last placed LMP car.

Teams are only required to field one driver in qualifying but may choose to change drivers at their discretion so you’re going to have to keep watching to see who goes fastest!

There will be no Hyperpole in play. Fans will have to wait for the real 24 Hours of Le Mans in September to witness the first-ever Hyperpole in action!

Can teams work on their car’s set-up?

Absolutely! The software allows teams to optimize their car set-up such as suspension changes, downforce levels and gear ratios. Pretty much everything that they can change and optimize in real life is simulated within the game.

Do all the GTE cars have the same level of performance?

The cars competing in GTE are based on production models which are fundamentally different from each other. To create a more level playing field, the GTE category has a BOP (Balance of Performance) applied by the developers of rFactor2.

How long can each driver be behind the wheel / their sim set up during the 24 hours?

The race will run for 24 hours non-stop.

It’s up to each entry’s Team Manager to make sure they comply with the rules.

Will there be any changes to daylight during the race?

As in the real-life 24H, drivers race through daylight, dusk, night, dawn and back into daylight. This will be replicated.

How do driver changes work?

There is a system within the game that facilitates the driver changes and, just as in real life, the drivers must come into the pits and bring the car to a stop to instigate the change-over. This will then hand control of the car over to the next driver. 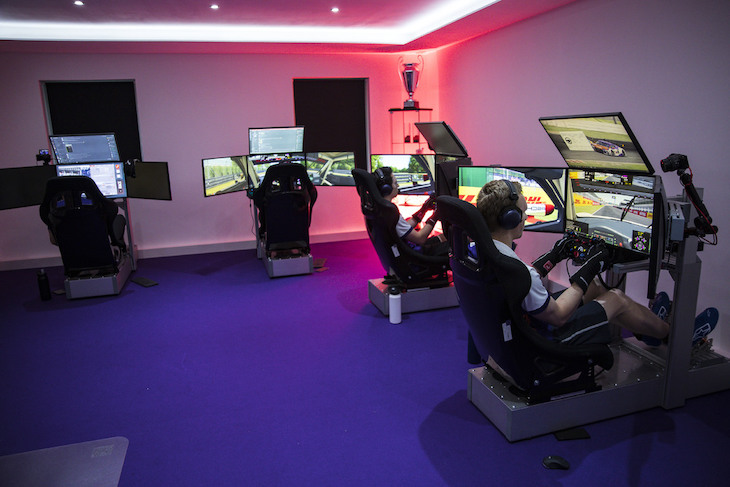 How do pitstops work?

Drivers will be required to pit for fuel, new Michelin tyres and carry out driver changes. If the car sustains damage it will affect a car’s performance, but damage can be repaired in a pitstop. The car will be driveable but may not perform as well as at the start.

Specific time values will apply for both routine maintenance (fuelling and tyre changes) and adjustment and repairs – the game includes some randomised variations in those times in an attempt to replicate the human factors involved.

Will there be a Safety Car?

There is a safety car.

The LMPH2G, the MissionH24 programme’s electric-hydrogen prototype, has been specially chosen as the Leading Car and Safety Car of the event. 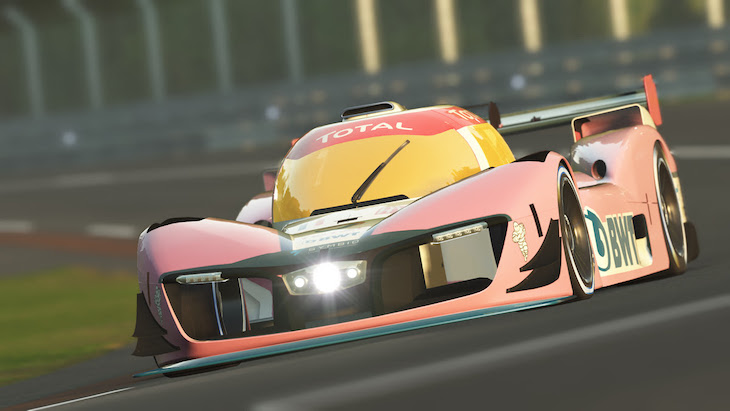 At the wheel of the LMPH2G will be its current test driver, Olivier Lombard, and professional sim racer, Aurélian Mallet.

The safety car can be deployed at any time at the discretion of the Race Director. Competitors will be informed using voice chat.

Will there be warning flags?

As in the real thing, there will be blue flags signalling a slower car and yellow flags for incidents in a specified area of the track. Race Control may also call a “Full Course Yellow” which slows cars over a section of the track, usually to allow an incident to be cleared or for track repairs to be made. At this time the drivers will be required to reduce their speed to 60kph (pitlane speed limiter) until advised they can resume racing by Race Control.

What level of damage will be simulated during the race?

Cars can suffer significant damage during the race which will affect the performance of the car. If the car is able to make it back to the pitlane then this can be repaired.

Will there be a race director?

Yes, the official FIA WEC Race Director Eduardo Freitas will be monitoring the race just as he would do for the real-life 24 Hours of Le Mans. He will be working with a team of assistants to keep an eye on drivers’ behaviour on track.

How will driving behaviour be monitored?

All drivers must be familiar with the sporting regulations, including the Code of Conduct, and the written race briefing from the race officials. There will also be a mandatory video briefing that will take place the day before the race. The important thing to remember is that this is a TEAM GAME…if one driver makes a mistake and incurs a penalty, it potentially damages not only his chances of victory but also those of his team-mates.

What penalties can be applied?

Penalties range from a reprimand, a drive-through, a stop-and-go, a time penalty (post-race) through to disqualification. Penalties applied by the officials cannot be appealed.

What happens if you get a technical fault on the game itself during the race?

We are looking at a number of solutions to minimize the influence of any technical faults. For example, we are able to use the safety car should something happen. We are also working closely with all of our partners to have a toolbox of solutions.

Should a team disconnect from the server, the car will be returned to the pitlane with a 5-minute penalty to be served upon. If there is a driver change, there will be a 6-minute penalty. Fuel and tires cannot be changed upon re-joining the server.

How will drivers communicate with the organizers?

There will be a variety of ways in which we will communicate. We will have a dedicated Team Speak server which allows the organizers and Race Control to communicate directly with all of the teams and drivers. We will also be in contact via Skype for interviews and reaction during the race itself.
Can drivers talk to each other during the race?

The drivers will be able to communicate with their team via a private Team Speak channel, just as they would be for the regular race. They will not be in contact with rival teams.

How can we be sure who is actually driving during the race?

All drivers must be connected to the organizers Zoom video streaming conference call with a clear line of sight to their face with no obstructions when they are racing.

Will drivers be filmed during the race?

This will vary from team to team. There will be two teams racing from the studio in a socially distanced environment. These will be filmed. Other teams may well choose to film their drivers and stream their individual POV.

Must their audio be switched on?

Drivers are permitted to mute their mics while racing.

Will fans be able to watch on-board footage during the race?

The main feed will incorporate on-boards, as well as broadcast cameras. However, a number of the teams and drivers will also be streaming their individual races for fans to enjoy.

How and where can I watch the race?