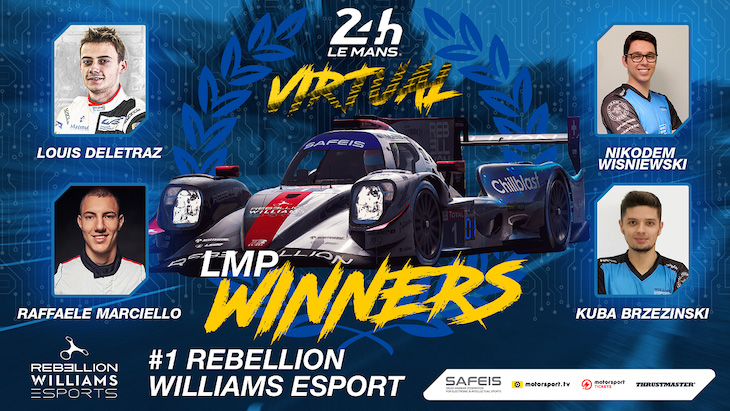 The #1 crew came home just under 18 seconds clear from a spirited last hour attack from the pole setting #4 ByKolles Burst Esport ORECA of Tom Dillmann, Esteban Guerrieri, Jesper Pedersen and Jernej Simoncic, the final push blunted by a defensive drive from the second Rebellion-Williams, Michael Romanidis ensuring that the #13 he shared with Jack Aitken, Agustin Canapinom and Marc Gassner played an effective rear-gunner role to keep Simoncic far enough back to prevent the gap closing before the chequered flag after the #4 finally got by just two laps from the end.

The winning Porsche dominated proceedings and won by a lap, a strong run from the pole setting GTE car further helped by troubles for several other strong contenders.

The race, with 50 starters, 30 in LMP2 with ORECA 07 LMP2 cars and 20 in a mixed GTE class featuring Aston Martin, Corvette, Ferrari and Porsche contenders with 48 of the 50 featuring mixed crews of real world Pro race drivers and Sim racing Pros.

The entry, peppered with big names from across motorsport, including a quarter of the current F1 grid, two ex F1 World Champions, Indy 500 winners, WEC, ELMS and IMSA Champions and many more besides, comprised the biggest Esports event yet held with the full FIA WEC backroom support and TV package presenting a highly professional racing product.

The Sim Racing community had expressed significant concerns prior to the event, based principally on the chosen simulation platform, RFactor2, selected by event partners Motorsport Games because of the availability of relevant simulated machinery in both LMP and GTE classes.

Those concerns were justified in part by a pair of Red Flag interruptions, the first in the fifth hour, the second in the 19th, following Server issues with a number of other minor glitches affecting several entries, some caused by web connection issues, including issues that effectively ended the challenges of both the Multimatic-entered effort that included father and son Andy and Seb Priaulx and the much-fancied #20 Team Redline effort that featured F1 stars Lando Norris and Max Verstappen which saw the young Dutch F1 talent pitched off the circuit twice after system problems, the subsequent damage ending the teams run before the effort was restored to running following the second red flag, as indeed had the FA/RB Allinsports effort of Fernando Alonso and Rubens Barrichello after glitches had forced them to rejoin the race with insufficient fuel to complete a lap early on.

Long-time race leaders Team WRT Esports too suffered from connection issues which dropped them down the order to finish an eventual and distant seventh.  There were substantial system-induced errors for others too including the #52 AF Corse Ferrari effort that featured yet another F1 pairing, Ferrari’s Charles Leclerc and Alfa Romeo driver Antonio Giovinazzi which left their 488 GTE briefly upside down on pit lane!  Glitches aside though there was much to admire from the online competition, plenty of close and clean racing in both classes with both real world Pros and Sim racing specialists impressing with speed and consistency.

One of the fiercest battles in the LMP class was for fourth overall, eventually won by the #33 2 Seas Motorsport Oreca of Isa Bin Abdulla Al-Khalifa, Oliver Rowland, Rory MacDuff and Devin Braune, which had led at one point, with Braune grabbing the position back from the Veloce Esports crew of Jean-Eric Vergne, Pierre Gasly, Jarno Opmeer and Isaac Gillissen in the final half hour. 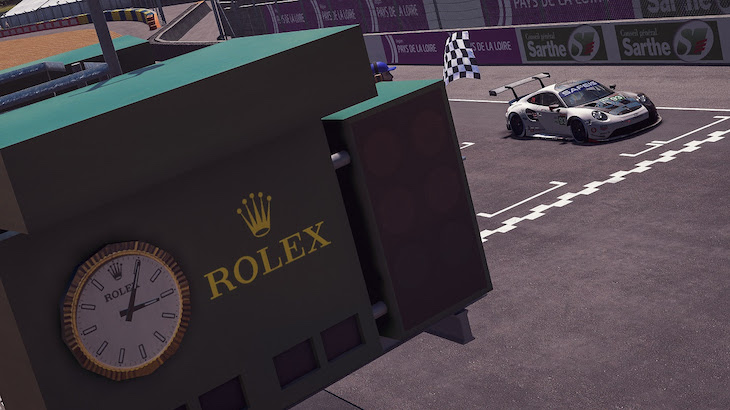 The GTE class was dominated by Porsche, the #93 effort leading most of the race with their nearest rivals, the R8G Esports Corvette substantially delayed after an incident that saw them cannoned into the barrier on the run down to Indianapolis by a careless move by the #71 Ferrari as GTE cars went three wide.  That saw the Corvette forced into a lengthy pit stop, ceding second position to the #95 Aston Martin of Richard Westbrook, Nicki Thiim, Lasse Sorensen and Manuel Biancolilla. 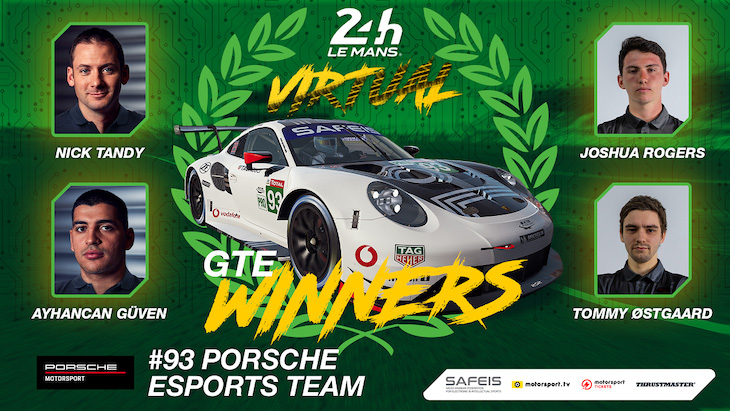 R8G with Daniel Juncadella, Mathias Beche, Erhan Jajovski and Risto Kappet would complete the podium despite a torrid run which included further damage from an incident at the second chicane when a recovering Katherine Legge rejoined in the path of the Corvette in here #50 Richard Mille Racing ORECA.

The Corvette’s podium finish was secured by yet another server connection issue, this time suffered by the strongly contending #92 Porsche which lost laps when the system refused to reconnect to their car after a driver change!

The #64 made it two Corvettes in the top four with the early leader, the #88 Dempsey-Proton’ Porsche losing out late on in the race.