A revised plan to ensure that the NLS (nee VLN) pits and paddock arrangements meet with the approval of all relevant authorities has been released ahead of the opening race of the season planned for 27 June. 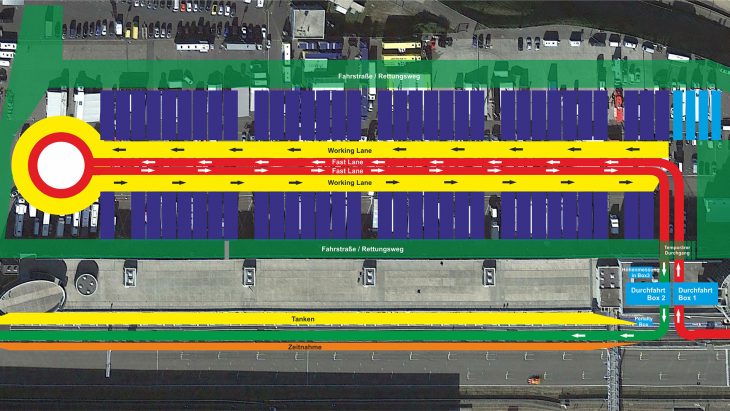 Now though the entry into the paddock is through box 1. After a loop through the paddock, it goes through box 2 back into the regular pit lane, where the fueling operations can then be carried out before joining the track. The speed limit for the racing cars will be 40 km/h in the entire pit lane/ paddock, 30 km/h when driving through boxes 1 and 2 and in the turning circle.

On June 5, 2020, test drives took place in the paddock of the Nürburgring on the “provisionally constructed” pit lane. In addition to VLN officials, ILN representatives and Porsche test driver Lars Kern were also on site. With the Grello-Porsche 911 GT3 R from Manthey-Racing, the feasibility of the route, especially the speed limits, was checked and found to be good and drivable.

VLN sports director and race director Michael Bork says of the pit lane paddock: “The races under these special corona conditions will be a great challenge for all teams, participants, drivers, mechanics and helpers, as well as for the organizers and the race management. We have to make compromises in many places and leave our usual structures and processes. This applies in particular to this pit lane paddock, which will function differently than the teams, drivers and we are used to. However, I am confident that our teams and drivers will be able to cope with it and adjust their racing cars and pit strategies accordingly. As long as the use of the actual boxes is not permitted due to the Corona requirements, this variant of the pit lane is the only sensible alternative for our racing format. ”

Monday 15 June saw the rescheduled official Test Day and more than 70 cars took the opportunity to blow away the lockdown cobwebs.

“It was a good test in many ways,” says Christian Stephani, managing director of VLN VV GmbH & Co. KG. “We received positive feedback from the drivers and teams. Many processes were comparable to those of the racing events. We can now say that our season-opening plans will work in these areas. ”

In contrast to the opening race though, the regular pit lane was still used for the test. Here everyone involved also had to wear a mask in the boxes. “Of course, it was unusual for our mechanics at first,” says Matthias Unger, team leader of the 2018 and 2019 champions. “But in the end, everything worked well. We have learned to deal with compromises in the past few weeks. I am very grateful to the VLN for investing so much energy that we can finally start racing again. ”

ROWE Racing, Walkenhorst Motorsport and Falken Motorsports, as well as the teams from Black Falcon, Manthey Racing and Phoenix Racing all, took the opportunity to test.

“To sit in the car again after such a long time feels great,” says Dirk Werner, who drove one of the two Falken-Porsche. “I had a few free laps and we were able to complete our test programme without any problems.”

The test day was also a success for Patrick Assenheimer in the Mercedes-AMG GT3: “We started in the wet today and then the track dried. We were able to drive under different conditions – a successful test. Now I’m looking forward to the start of the season. ”David Pittard (BMW M6 GT3, Walkenhorst Motorsport) was also happy to get the asphalt under the wheels again in the green hell:“ When I first headed from the planting garden towards Stefan Bellof S drove, I had a big grin on my face. Man, that felt good. I also had a lot of fun at the digital NLS races and will continue to do so. But there is no substitute for the real feeling on the racetrack. ”

The first race of the Nürburgring endurance series will take place on June 27th. The 51st Adenauer ADAC Rundstrecken-Trophy over four hours. 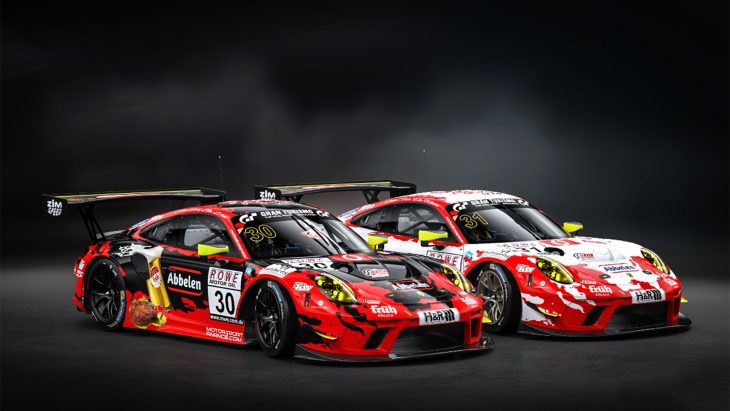 “The test Monday was extremely important for our team. After testing in Barcelona at the beginning of March, it is now also a matter of collecting the first data for the 2020 season on the Nürburgring Nordschleife, ”explains Abbelen.

The third team car, the Porsche Cayman GT4 (718 Clubsport) for Hendrik von Danwitz and “Jules”, will be used for the first time at the NLS season opener on June 27.

ROWE Racing have confirmed a five race NLS campaign in addition to their Nurburgring 24 Hours programme.

The team tested with BMW DTM drivers Philipp Eng and Lucas Auer during the official test on Monday in the team’s #99 BMW M6 GT3, Auer’s first outing with the team.  The season opener will be followed by an NLS double weekend with one race each on July 11th and 12th with the fourth NLS race on August 1st., all four opening races set for 4 hour duration. 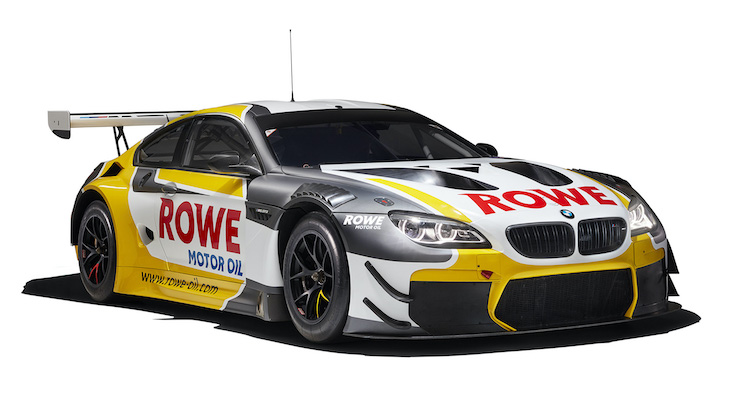 ROWE Racing will add a second M6 GT3 for the ROWE 6-hour ADAC Ruhr Cup race on August 29, which will also be the dress rehearsal for the 24-hour race this year.

Hans-Peter Naundorf, Team Principal ROWE RACING: “We are very happy that the season can finally start after the long Corona mandatory break. A big thank you goes to the VLN operators, who worked with all partners and with a lot of work to develop a great hygiene concept that enables us all to return to racing. These new conditions are a great challenge for all teams, but we are happy to face them. It will be exciting to see who gets used to these conditions fastest and best. The test and adjustment drive is the perfect opportunity to familiarise us as a team with the new measures and processes in addition to the coordination of the vehicles on the route. I am also looking forward to the first assignment of Lucas Auer in our team and I am sure that with his experience from the DTM and from other racing series he will quickly acclimatise to us.”

Kondo Racing, who had been set to campaign a limited NLS season and the Nürburgring 24 Hours in 2020 have postponed their effort until 2021.   The team and their Nissan GT-R Nismo GT3 raced last season as the opening year of a planned three-year programme at the ‘Ring, the effort coming done 9th overall, 8th in the SP9 class. 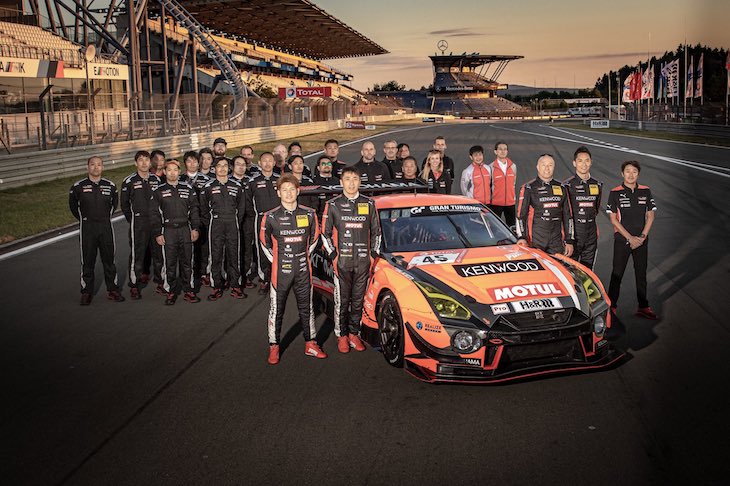 Whilst the team’s car is already in Germany the team has decided to skip the 2020 season in Europe due to health concerns and potential travel and logistical issues.

There is though a little good news, the commitment to a three-year programme is maintained and the team now plan to return both in 2021 and 2022.

Scuderia Cameron Glickenhaus owner Jim Glickenhaus took to the wheel of the brand new Glickenhaus 004C this week as the GT3-spec machine continues its test programme in Italy ahead of a planned effort for the 2020 Nurburgring 24 Hours. 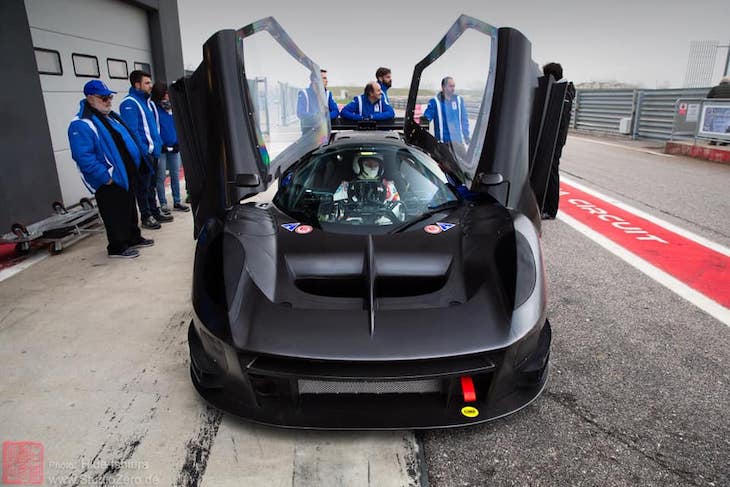