The piece below comes from 2007, written by his mates and great supporters Jon Hart and Paul Ryan.  It provides a fascinating insight into the battle that Allan had to be noticed and came at a time when his hard work was paying off, and he was being more widely recognised for the talent he truly was – RIP Simmo

He’s on first name basis with Qantas staff and has probably driven a greater variety of cars in the last twelve months than anybody in the field. 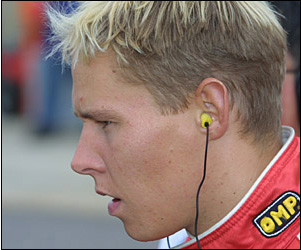 The Dane spends a third of his time-based in Odense, Denmark, a third “down under” in Australia – and the other third aboard Qantas flights going back and forth.

Last year he drove in the Le Mans Series with Autorlando Sport aboard the team’s Porsche, with Gunnar Kristensen (obviously a popular name in that part of the world), and was invited back for his Le Mans 24 Hour debut with 2006 runners-up Lars Erik Nielsen and Pierre Ehret.

His full-time drive in the Le Mans Series is aboard Virgo Motorsports’ Ferrari 430, but in early September he’ll be back with Triple 8 for the Sandown and Bathurst V8 Supercar Enduros “down under” – a re-invitation since he did such a great job in 2006. In between, he will continue his assault on the Australian GT Championship with the CCC/Coopers Team, in which he currently leads the points. 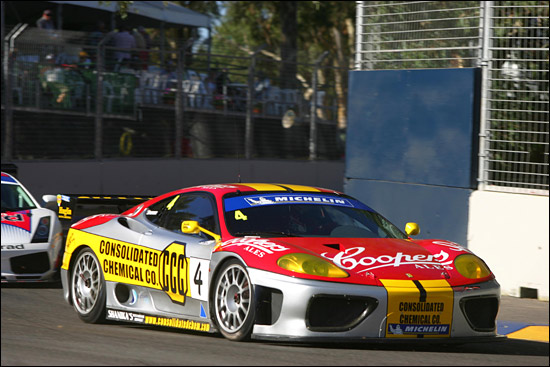 On top of all that, the Dane has successfully dabbled in tarmac rallying this year, winning Rally Tasmania aboard a Mitsubishi Evo 9 against the regular specialists, including multiple Oz Champ and Asia/Pacific Champ Cody Crocker. 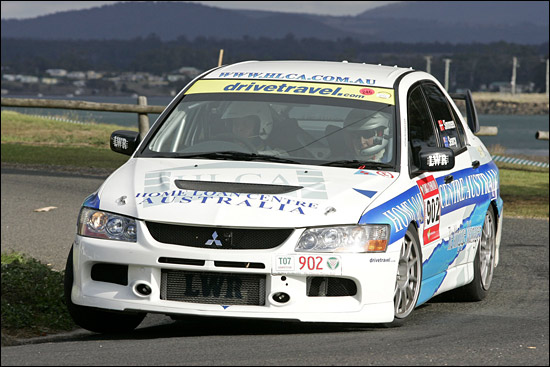 The talent is obviously there, but he doesn’t have the budget to match, to move his way higher up the pecking order. But for Simonsen, the light is beginning to shine at the end of the tunnel. The results are there and he is definitely a driver who works as hard out of the car as in it, to please his commercial partners. Such a rare commodity these days, to find a driver who has adapted so well to understanding the commercial implications of the sport.

This year’s Le Mans opportunity is “better late than never”. Simonsen was nearly part of the world’s greatest endurance classic two years ago, but the deal fell over at the last minute.

“I was invited to come to the test day two years ago and I flew all the way from Australia expecting to get in the car,” Simonsen said.

“When I got here another driver ended up in it, and I had to turn around, head back to the airport and fly all the way back to Australia. That is mentally tough stuff but it makes you stronger.

“I won’t name names, but obviously it wasn’t a really pleasant experience, but I am really pleased for the opportunity to race here this year.” 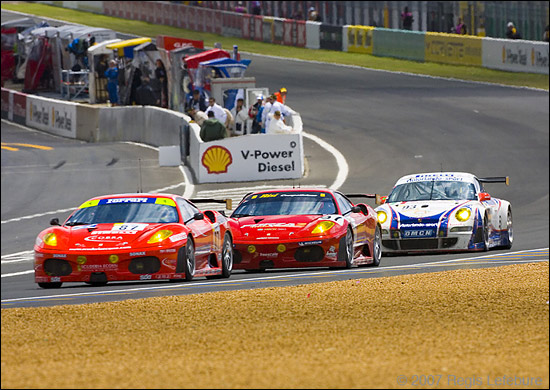 Simonsen has quickly made up for lost time. Starting from 5th on the grid, his Autorlando Sport Porsche hit the front after 90 minutes, thanks to handy pace and an excellent pit stop strategy from the Italian team during the tricky wet/dry conditions.

“It is certainly a very challenging track. It’s very long and extremely quick in a few places like on the Mulsanne, across the back into Indianapolis and the Porsche Curves.”

“The place gives you great satisfaction, I like it a lot. It’s a great experience. The biggest thing about the whole weekend is the amount of Danes that are here. It feels like being at your home race and that’s pretty special for me.

“The parade on Friday was really extreme. To see so many people singing and having a great time, we really enjoyed it. I feel sorry for all the fans who are lying out in the rain overnight with a hangover.”

The Dane is certainly making a name for himself on both sides of the equator. A one-off opportunity to drive at the Albert Park Grand Prix circuit has ballooned into an extensive array of drives.

“Last year I did about 15 return trips to and from Australia – that’s probably enough,” he said.

“Originally I got the opportunity from Prancing Horse Racing to go out and do the support race in 2003 at the Australian Grand Prix, and things have just snowballed from there.

“I have built up a really good relationship with them and ended up driving wide variety of cars, including the Ferrari that David Brabham and I raced in Bahrain at the GT Festival in ’04. 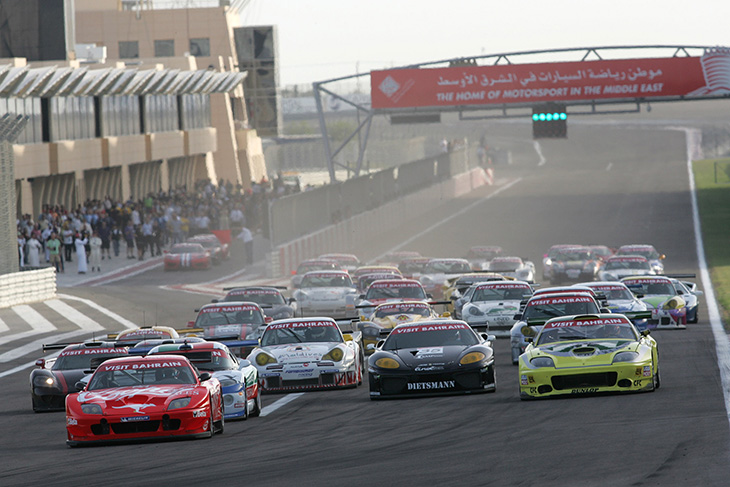 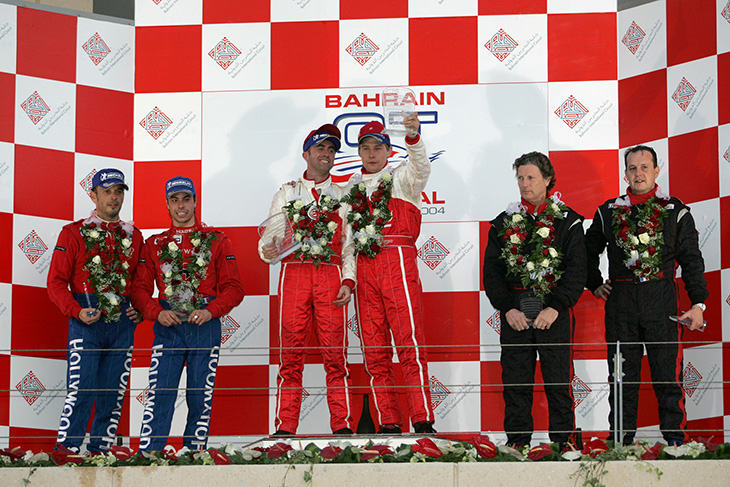 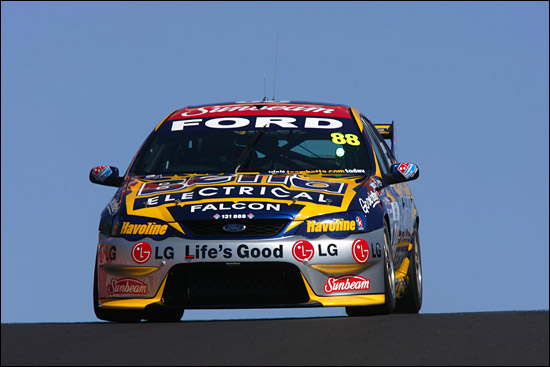 While in days of old, it was not uncommon to see Formula 1 stars competing in everything from Grands Prix, to Le Mans to touring cars, today, it is a rarity. It is almost as if Simonsen is from another era, but the Dane believes the variety of drives has enhanced not only his skill, but his reputation.

“Driving a big variety cars helps you a lot because you are always having to adapt to different conditions. You also end up getting offered more drives because you are racing in front of a larger variety of teams – your face is always out there and that helps on the commercial side of things.”

“I definitely think it has helped me become a better driver, that experience is particularly handy in tricky conditions – you learn to cope with difficult situations quickly.” 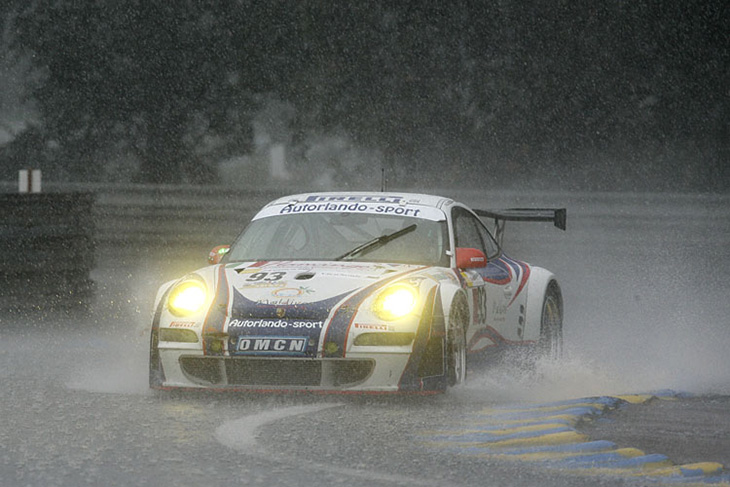 Those tricky conditions nearly brought his Le Mans dream to an end. After a stellar performance throughout the race, the Autorlando squad was thrown into panic in the late stages of the 24 hours when the Simonsen aquaplaned at the first chicane and slammed the tyre barrier – the car sneaking under the tires but taking off the rear wing in the process.

With a few laps “in their pocket” over Adrian Newey’s Ferrari, frantic pit work got the car back on track and on to the podium.

“That certainly wasn’t the plan, but the team did an excellent job. A big thanks to the guys from Porsche too, who kept charging into the garage with parts for us to get the car back,” explains the Dane. 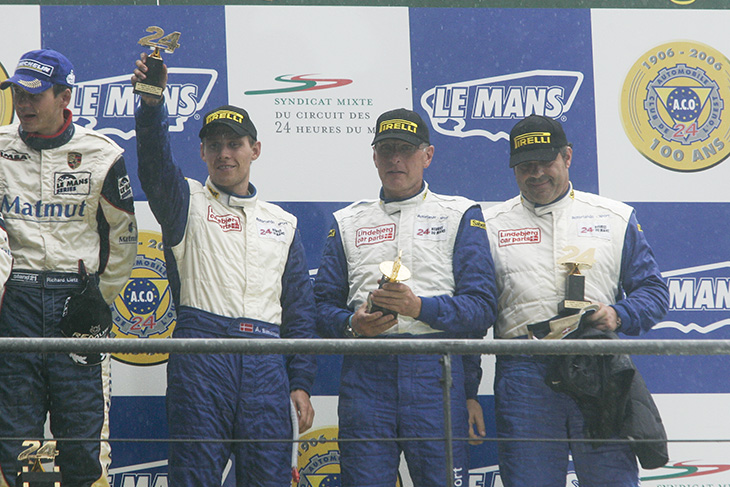 “I feel like I need to sleep for a week and probably will but this is just fantastic to come here as a rookie and snatch the podium. The car was good but that weather was really bad. There was so much standing water on the Mulsanne Straight it was just impossible to control the car sometimes.

“I think I used up my get-out-of-jail-free card today at the first chicane. It’s great we had a mega team all pulling together to get the result. I couldn’t be happier and can’t wait to come back again next year.”

Those strong performances are starting to attract attention. After doing Bathurst a couple of times with a lower-ranked team, Allan got a top-line enduro drive sharing with Richard Lyons for Triple 8 last year.

His sportscar efforts, including an amazing GT3 race at Silverstone last year when he passed 40 cars in 40 minutes, are also making people stand up and take notice. 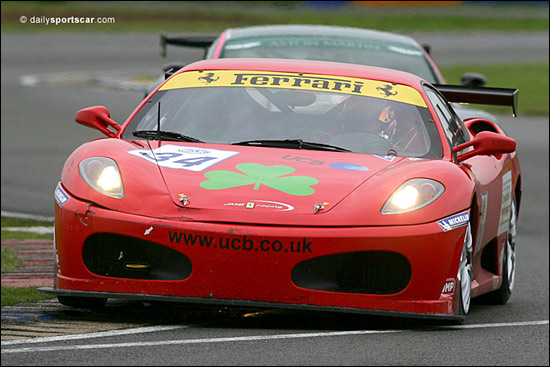 But what would happen if the offer of a full-time V8 Supercar drive and a full-time factory sportscar drive arrive in his inbox at the same time?

“That would be a nice problem to have. I really don’t think I should answer that question just in case it comes true.

“These would obviously be the two fantastic goals that I am working towards. Getting a full-time factory sportscar drive would obviously provide a lot of career security and getting more involved with a professional team like Triple 8 would also be a great experience.

“Both would be dreams come true for me. That’s why I like to have lots of things going on at once and hopefully, one of them will turn into something.

“I’m certainly not complaining with what I am doing, I am really grateful for what I have going on at the moment, but it would be nice to break into the big time.”

Simonsen came from a karting background, contesting huge battles with the likes of Kimi Raikkonen and Giorgio Pantano during his early development.

But like many, the goal of climbing the single-seater staircase to Formula 1 fell short.

But the Dane is not one to complain. While the security of a full-time factory seat hasn’t arrived yet, he’s happy with his career progression.

“Once you get that chance, you have to deliver. I’m not jealous or anything, I really feel proud for what those guys have achieved. In my own mind I know I have raced well against them and can do the job.”

After alighting from the Autorlando Porsche and his 3rd place podium position at the Le Mans 24 Hours, Simonsen will be back to ‘the opposition’ next time out. From Stuttgart to Maranello and back – in the Virgo Motorsport Ferrari 430GT for the Nurburgring Le Mans Series round.

“At the moment we are equal leaders of the championship so things are looking really good. Rob (Bell) and I have had a third and second so far and having a strong team-mate like that really helps with the strategy.

“The Virgo guys have done a great job and the car has performed really well without any problems. We are on the Dunlop tyres and we are working hard with them to further develop the package – that is improving all the time.

“At the moment, we are going really well primarily because we are working so well as a team.” 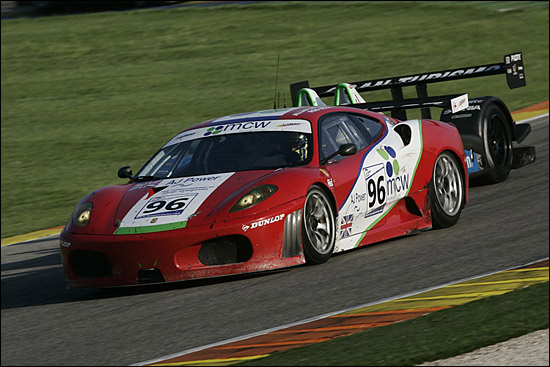 With the help of Tom Kristensen, John Nielsen and Jan Magnussen, the Le Mans 24 Hours is big news in Denmark. If Simonsen keeps up these performances, the mad, Viking hat-wearing Danes will have a new name to cheer for soon, if not already.