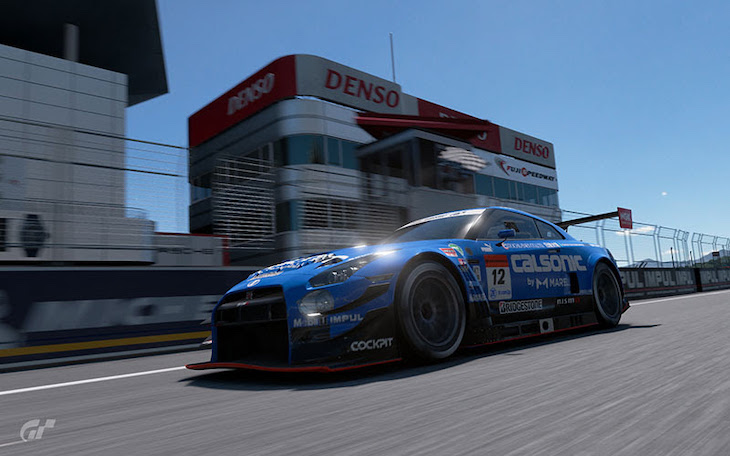 As most of the real world racing series have concluded their virtual endeavours with their real-world racing drivers, Super GT offered up a tasty epilogue of their own with the Super GT x Gran Turismo Sport Special Race, taking place in GT Sport’s virtual rendition of Fuji Speedway and featuring 18 current drivers plus two legends in identically matched GT3, GTE, and fantasy “Group 3” cars.

In the end, it was Daiki Sasaki driving the #12 Calsonic Nissan GT-R NISMO GT3 to victory. Conserving fuel and Medium compound tyres on his first stint allowed Sasaki to make just one stop and push harder when he switched to the much faster Soft compound tyres.

Sasaki won by 7.8 seconds over second-place Takuto Iguchi in the #61 Subaru WRX STI Gr.3. Katsumasa Chiyo was set to finish third before running out of fuel on the front stretch, allowing Hiroki Otsu (#64 Modulo NSX Gr.3) to take the final spot on the podium.

“I knew you can get a pretty good effect from slipstream in this race, running close against the other drivers early on, so the key was how fast of a lap time I could go with the medium tyres,” said Sasaki after the race. “And then, in the latter half, I changed to the soft tyre and boom, that was my strategy. There weren’t many battles, but I had confidence in tyre management, so I think I was able to take advantage of my ability.”

Ryo Hirakawa looked strong in his #37 KeePer TOM’s GR Supra Racing Concept – even on a two-stop strategy – but an unscheduled third pit stop with seven laps left forced him out of the fight for victory. Disconnections knocked Team Kunimitsu star Tadasuke Makino, and three-time GT500 Champion Satoshi Motoyama, out of the race prematurely.

The event was a major success on its YouTube premiere on Sunday, drawing in over 12,500 spectators. If this is the last major virtual racing series to feature full-metal racing drivers, then it’s a strong finale – and well worth watching again for those who missed out. 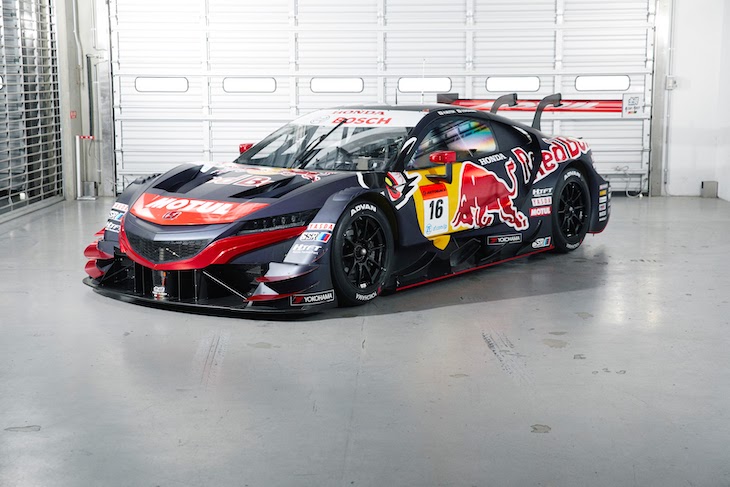 On Tuesday, Red Bull and Team Mugen unveiled their racing livery for the 2020 season – a stunning rendition of the traditional Red Bull racing colours of matte blue, red and yellow upon their #16 Red Bull Motul Mugen Honda NSX-GT.

Sean Bull, the British designer best known for his design work for clients such as Renault F1 Team, Hyundai World Rally Team, and GEOX Dragon Racing, developed the livery and team branding for the 2020 Red Bull/Mugen project, which will be seen on track this weekend at Fuji, with veteran driver Hideki Mutoh and rookie Ukyo Sasahara.

Mugen’s partnership with Red Bull goes back to 2017 in Super Formula with the debut of future F1 driver Pierre Gasly, but this will be the first time that the soft drinks maker will feature on Mugen’s GT500 cars. 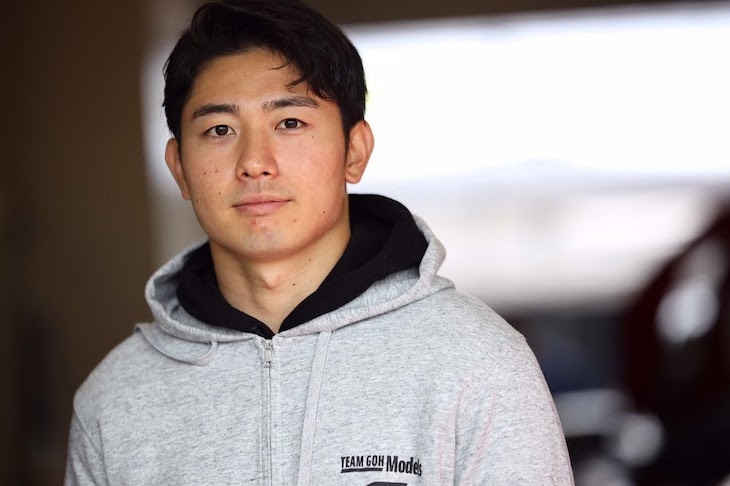 Japanese driver Yu Kanamaru has been added to the entry list for this weekend’s Super GT official pre-season test at Fuji Speedway, into the third driver slot for Keihin Real Racing in their #17 Keihin NSX-GT.

Bertrand Baguette, who set the fastest time in the first pre-season test at Okayama International Circuit way back in March, is one of several drivers who cannot yet commute to Japan due to travel restrictions placed by the Japanese government during the Coronavirus pandemic. It’s expected that Baguette will not be able to test this weekend, and unless an exemption is made, he may miss the start of the season at Fuji on 19 July.

So in steps the 26-year-old Kanamaru, who – just like Team Mugen’s Ukyo Sasahara, steps up from the FIA F3 Asian Championship after finishing 6th in the 2019-20 season. Kanamaru also has prior experience racing overseas in Formula V8, Euroformula Open, and Formula Renault Eurocup. At home, Kanamaru has raced in All-Japan F3 and TCR Japan Series, and tested a Super Formula car for Team Impul back in 2017.

On the GT300 side, Pacific-D’station Racing driver Nicki Thiim and X Works Racing driver Alex Au have been officially scratched from the entry list, joining a number of GT300 drivers based outside of Japan that will not be able to attend the test and could miss the start of the season.

Charity Auction to be held in August 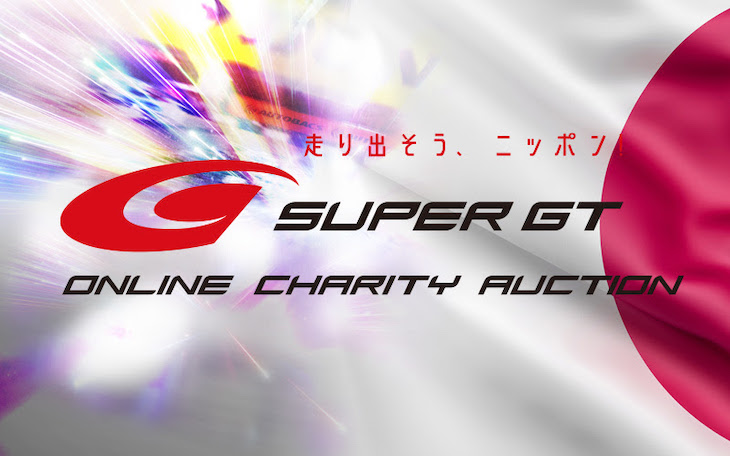 Super GT and series partners BH Auction will hold an Online Charity Auction event on 2 August, to raise money for Japan’s medical professionals and institutions who are working to combat the Coronavirus outbreak.

With the motto of, “We will beat COVID-19 and start running again!” fans will be able to bid on a number of items to raise money for the Nippon Foundation’s COVID-19 Emergency Relief Fund. BH Auction will launch a dedicated app for people to take part in the auction.

There are a number of race-worn drivers’ suits being offered by GT500’s winningest driver, Tsugio Matsuda, and three-time GT300 Champion, Nobuteru Taniguchi. In addition, one can also bid on the honour of waving the chequered flag for the sixth round of the 2020 Super GT Series, to be held at Suzuka on 25 October.

More information can be found on the BH Auction official website. HERE >> 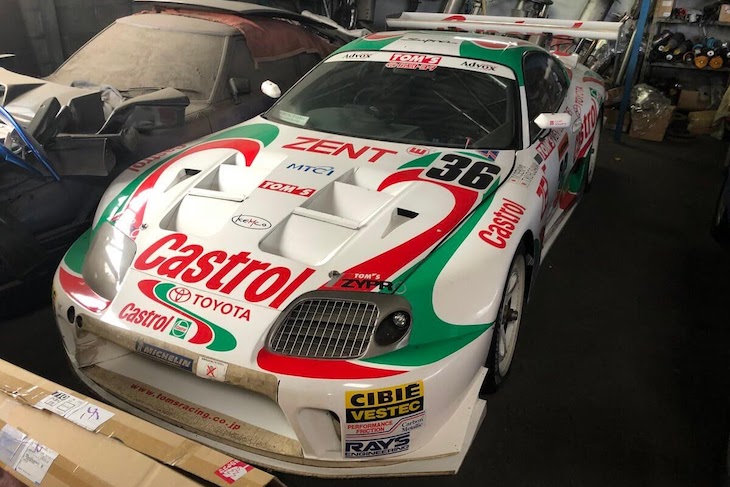 Those wishing to restore a piece of motor racing history will have their chance to do so, as TOM’s Racing has set up a crowdfunding campaign to restore the 1998 Castrol TOM’s Toyota Supra to be able to run once again. HERE

While the championship-winning 1997 Castrol TOM’s Supra is already a museum piece (RJ told its story here), the ‘98 rendition is in need of a lot of love and care after the car was recently discovered in a disused warehouse in the Chugoku region of Japan. TOM’s have set a goal to raise 50 million Yen (or just over £376,000 GBP) towards restoring this machine.

24 Hours of Le Mans winner Masanori Sekiya and Norberto Fontana drove this car to two podium finishes in 1998, and from the decals in the front of the A-pillar, this specific car was then driven in 1999 by Sekiya and Takuya Kurosawa, who took two victories, won the GT500 Teams’ Championship, and finished runner-up to Erik Comas in the Drivers’ Championship.

The chassis is rusted, the body is scratched, and even the car’s 3S-GTE engine is missing – but it is still salvageable and TOM’s hopes to have the car running by 2021. As with many crowdfunding projects, tiers are available depending on how much is pledged, all the way up to being able to spend an entire day with the Castrol TOM’s Supra for those who donate 9,999,999 yen!