Three months had passed since the last time the cars and drivers of the Autobacs Super GT Series tested in the real world. In fact, at the end of March, they had planned to test at Fuji Speedway, before the novel Coronavirus pandemic worsened in Shizuoka Prefecture, and caused the test to be delayed, along with the start of the season.

But when full-carbon, full-metal driving resumed on Saturday at Fuji, it brought back a portion of the “normal” we once knew. As the grandstands of baseball and soccer stadiums around Japan sit empty while NPB and J1 League matches are being played, so too did the grandstands at the 4.5 kilometre Fuji Speedway, which remain closed to spectators for the test, as they will for the foreseeable future.

Session 1 began at 10 AM local time, under cloudy skies and temperatures at around 24°C on a mild early summer morning under the summit of Fuji-san.

The first session was free of any major incidents, just two red flag periods for mechanical stoppages, one at 19 minutes, one at 97 minutes, about 16 minutes of stoppage in total. There was also three Full Course Yellow (FCY) simulations, including two in the final fifteen minutes of the session, as the series prepares to implement the FCY protocol this year. 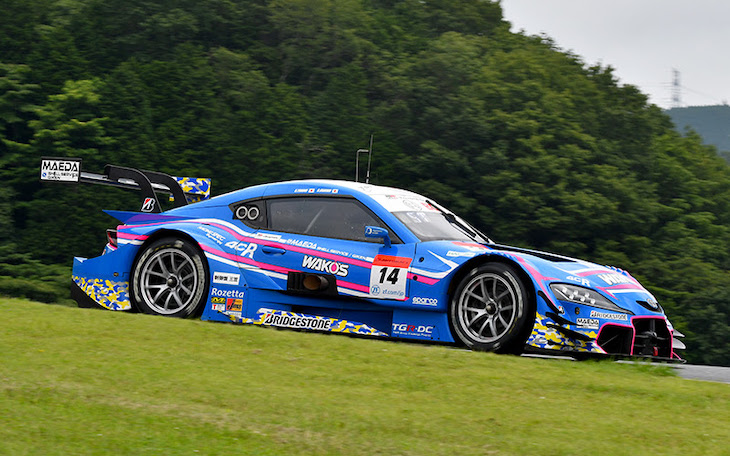 Reigning GT500 Drivers’ Champion Kazuya Oshima made it known that his number 14 Wako’s 4CR Toyota GR Supra was going to be among the cars to beat this year. With 25 minutes left in the session, Oshima set a best lap of 1 minute 28.482 seconds, and that time stood as the fastest in the session. Hiroaki Ishiura was second-quickest in the #38 ZENT GR Supra, making it a TGR Team Cerumo 1-2 in Session 1, led by Oshima in the KTR-owned, Cerumo-prepared Wako’s GR Supra.

The session was also encouraging for Nissan supporters. Ronnie Quintarelli (#23 Motul Autech GT-R) was third-fastest, and Daiki Sasaki (#12 Calsonic Impul GT-R) was fifth, the two Nissans sandwiching the #36 au TOM’s GR Supra of Yuhi Sekiguchi in fourth. NISMO Executive Advisor Motohiro Matsumura made the comment during the Okayama test that the 2020 GT-R NISMO GT500’s new NR20B engine “is totally different from previous ones.”

Indeed, it’s been speculated that the Nissan NR20B finally has the breakthrough turbulent jet ignition system already in use by Honda and Toyota. However, a broken prop shaft for the #3 CraftSports Motul GT-R (Kohei Hirate) that brought out the first 10-minute red flag was less encouraging.

Best of the Hondas in Session 1 was the #8 ARTA NSX-GT, reigning GT300 Champion Nirei Fukuzumi was 6th-fastest – just 0.016 seconds up on the #100 Raybrig NSX-GT of Naoki Yamamoto, debuting its 2020 racing livery this weekend.

The new #6 Advics muta Toyota MC86 of Ryohei Sakaguchi just missed P1 by 0.038 seconds, a strong result for the Mother Chassis platform. Then it was the #52 Saitama Toyopet GreenBrave Toyota GR Supra (Hiroki Yoshida), with a refreshed livery, in third, just two-tenths down on Gamou’s benchmark in Saitama Toyopet’s original construction JAF-GT300 car – so, all three different flavours of GT300 vehicles were well accounted for in this top trio! 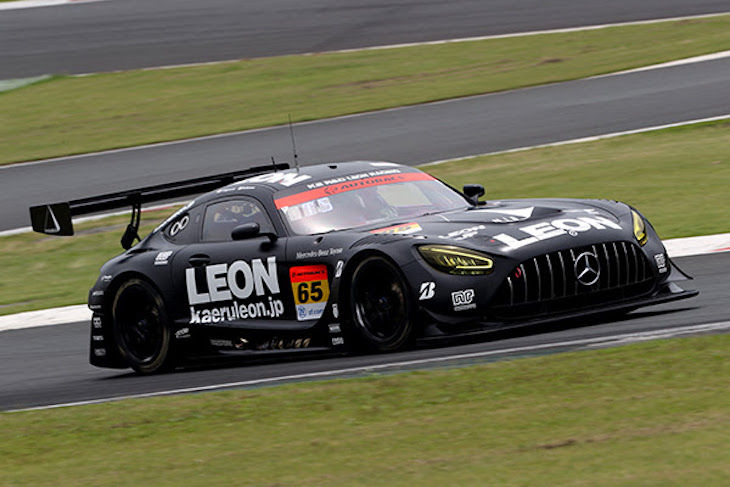 Session 2 began at 13:30 local time – and within the first hour, most of the good energy within the Nissan camp evaporated when both the #12 Calsonic GT-R with Kazuki Hiramine at the wheel, and the #24 Realize Corporation Advan GT-R of Jann Mardenborough, suffered near-simultaneous propeller shaft failures – bringing out a red flag for fourteen minutes. The Realize GT-R would stop again an hour later, bringing out another red flag – one of three in total on the session.

Most of the three-hour session progressed with teams focusing on racking up mileage and running race simulations – quite important as the Super GT Series will race here for four of its eight rounds in 2020. Despite the forecast calling for rain, the track remained dry throughout in Session 2 as temperatures peaked at 30°C. And, at the end of the session, the last twenty minutes were reserved for class-exclusive running – ten minutes for the GT300s, then ten minutes for the GT500s, in a qualifying simulation.

The ARTA NSX, now in the hands of Tomoki Nojiri, had the early benchmark at a 1’28.549. With less than three minutes left, their Honda stablemates – the new-look #16 Red Bull Motul Mugen NSX-GT – jumped to the top of the board as rookie Ukyo Sasahara settled in with a best time of 1’28.446.

As the clock hit zero in the session, it was the Raybrig NSX of Makino that made a big jump up the board, right to the top with a best time of 1’27.870, the fastest time of the day for the young man in his last day as a 22-year-old!

The #17 Keihin NSX-GT of Koudai Tsukakoshi was third-quickest and best of the front-engined Hondas, with a 1’27.974. Tsukakoshi handled the majority of testing today with his regular teammate Bertrand Baguette unable to come to Japan due to travel restrictions. Baguette’s understudy, 26-year-old newcomer Yu Kanamaru, ran just 13 laps today compared to Tsukakoshi, who logged 98 laps.

And in a scene that was not expected when Toyota announced their motorsports activities in February, Kenta Yamashita – the other half of the reigning GT500 Drivers’ Champions – settled right into the cockpit of the #39 Denso Kobelco SARD GR Supra and went fourth-fastest. Yamashita, who’s been back in Japan since the FIA World Endurance Championship went on a pandemic-enforced hiatus, was filling in for Heikki Kovalainen, who was also unable to make it to Japan this weekend.

Fukuzumi was sixth-fastest in the ARTA NSX, Sasahara’s best time was good enough for seventh, and despite the two stoppages, Mardenborough ended Session 2 as the fastest Nissan, eighth overall on the day. 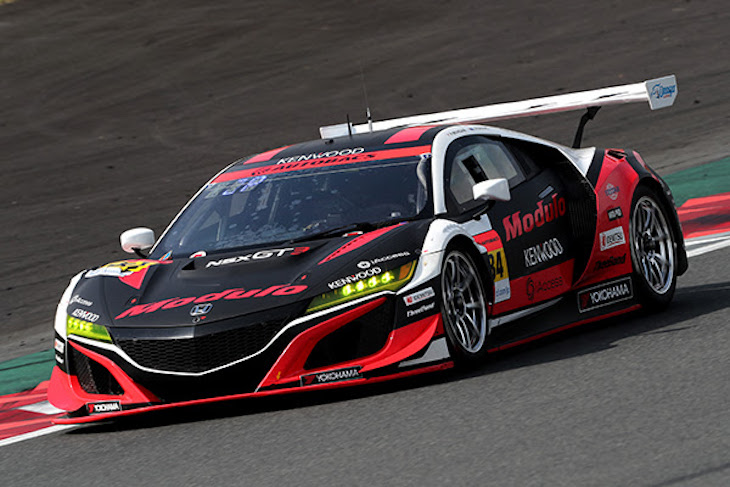 Over on the GT300 side, teams carried out a similar testing menu in Session 2, saving their hot laps for their respective 10-minute class-exclusive running at the end.

The #4 Goodsmile Hatsune Miku AMG of Nobuteru Taniguchi held the top spot just as the time expired. But with his last flying lap, Australian Jake Parsons in the #34 Modulo Kenwood Honda NSX GT3, set a best lap of 1’37.412 – good enough to take the top spot in GT300 by just 0.009 seconds over Taniguchi and the Miku AMG!

Gamou was third-quickest, putting two Mercedes in the top three, as the LEON AMG racked up a class-leading 117 laps on the day. Best of the JAF-GT300s was the #61 Subaru BRZ R&D Sport of Takuto Iguchi in fourth, the early pacesetters in the session. Rookie third driver Yuui Tsutsumi was also impressive, setting the fifth-fastest time in Session 2 aboard the Advics MC86, just a tenth off the pace of his veteran teammate Sakaguchi from the morning session.

Manabu Orido showed real speed in the fluorescent yellow #30 Toyota GR Sport Prius PHV apr GT, going sixth-quickest on the day. In seventh was the #21 Hitotsuyama Audi R8 LMS GT3 of Shintaro Kawabata, who ran and will run the entire test on his own, with Audi factory teammate Christopher Mies among a slew of registered GT300 drivers who cannot yet come to Japan. And, despite bringing out a red flag in the last half-hour, the #52 GreenBrave Supra ended the day eighth-quickest thanks to a hot lap from Yoshida.

As the sun has set over Fuji-san, another day of testing awaits tomorrow.