The teams and drivers of the Autobacs Super GT Series woke up at dawn to rainfall on Sunday morning. Wet conditions greeted them at Fuji Speedway for the second day of the second and final official pre-season test for the 2020 season.

Session 2 on Saturday had been extended by 30 minutes, so Session 3, which was scheduled to start at 10 AM Sunday, was shortened by 30 minutes and began at 10:30 AM.

The rain was persistent throughout the 1 hour, 30-minute session, as such, the teams were hard at work putting in mileage on their wet-weather setups and tyre compounds, gathering as much data as they could for their tyre suppliers. 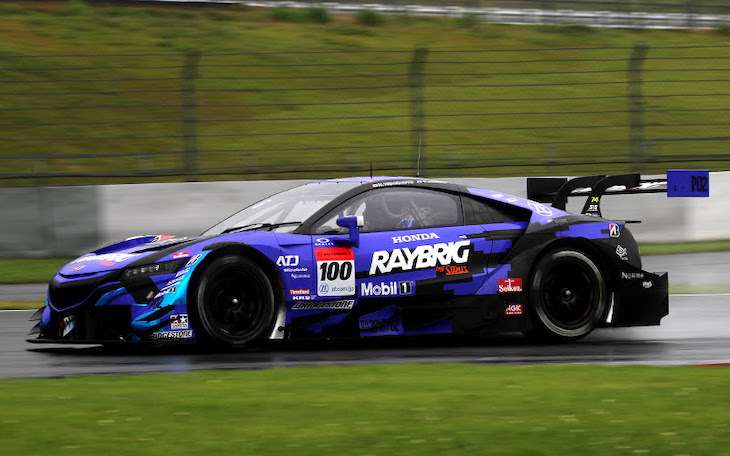 In the wet conditions, Tadasuke Makino, who’d just turned 23 today, picked up from his form yesterday and set the fastest time of Session 3 in his #100 Raybrig Honda NSX-GT. His best time was a 1’40.147, set in the final minutes as the rainfall had weakened in the last half-hour. It’s a daunting task replacing a driver with the stature of the departed Jenson Button, but Makino has shown through these two days of testing that he’s more than up to the challenge.

Yuji Tachikawa was second-fastest aboard the #38 ZENT Cerumo Toyota GR Supra, with a 1’40.480. The #14 Wako’s 4CR GR Supra (Sho Tsuboi) was third, the #8 ARTA NSX-GT (Tomoki Nojiri) ended 4th after leading most of the session, and the #23 Motul Autech Nissan GT-R (Ronnie Quintarelli) was 5th. Crucially, Bridgestone tyres took eight of the top 10 places in Session 3, with the other two spots being held by the Michelin-clad Nissans.

There was only a brief red flag when the #37 KeePer TOM’s GR Supra of Ryo Hirakawa came to a stop with 26 minutes left. 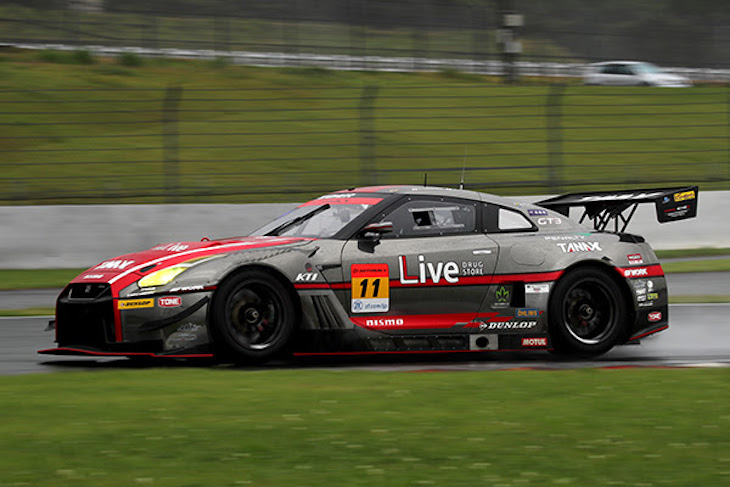 In GT300, the fastest time belonged to the Dunlop-clad #11 Gainer TanaX Nissan GT-R GT3 of Katsuyuki Hiranaka, with a best lap of 1’47.589, three-tenths ahead of rookie Toshiki Oyu in the Bridgestone-clad #55 ARTA Honda NSX GT3 in 2nd.

The rain eased off and dissipated entirely between sessions. The track was now mostly dry by the time Session 4 began at 14:20 local time, the last session of the pre-season. The first hour was interrupted by two red flag periods, the first coming just three minutes into the session when the #31 Toyota GR Sport Prius PHV apr GT crashed at the Toyopet 100R corner. Driver Yuhki Nakayama had hit a wet patch of grass and spun off on his installation lap, Nakayama was uninjured, but the Prius suffered rear-end damage too great to continue with the session. Within five minutes of going green again at 14:35, the #55 ARTA NSX GT3 of Oyu came to a stop, bringing out the second red flag.

It was trouble-free for the rest of the session. With 25 minutes left of green flag running, the #37 KeePer TOM’s GR Supra leapt to the top of the board, as Hirakawa put in a time of 1’28.192. It looked like there would be no further improvements before Full Course Yellow and Safety Car training began.

Honda and Toyota alternated places throughout the top eight in Session 4. The Raybrig NSX of Makino was 3rd, the #16 Red Bull Motul Mugen NSX-GT (Ukyo Sasahara) was 5th, and the #17 Keihin NSX-GT (Koudai Tsukakoshi) was 7th, while Kazuya Oshima was 4th in the Wako’s GR Supra, 6th was the #38 ZENT GR Supra (Yuji Tachikawa), and 8th was the #39 Denso Kobelco SARD GR Supra (Kenta Yamashita).

The drivetrain issues that plagued the Nissan camp all day Saturday didn’t come up again today and all four GT-Rs enjoyed relatively trouble-free running. Their best time came from Tsugio Matsuda in the Motul GT-R, finishing 9th, 1.028 seconds off the best lap from Nojiri. But, with manufacturers carrying on with different testing programmes, it’s likely that we won’t see where Honda, Toyota, and Nissan truly stand amongst each other until qualifying for the first round on 19 July. 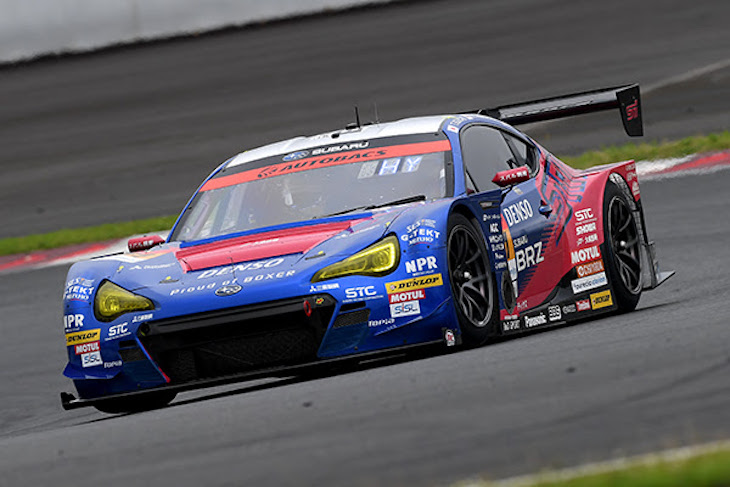 In GT300, Session 4 saw Hideki Yamauchi in the #61 Subaru BRZ R&D Sport record the fastest time of the weekend. With 30 minutes left in the session, Yamauchi jumped to the top of the leaderboard with a 1’37.379. That surpassed Jake Parsons’ best lap in the #34 Modulo Kenwood NSX GT3 from Saturday, by 0.033 seconds. It’s an encouraging result for the factory Subaru team and their JAF-GT300 car, which struggled in 2019. And for Dunlop tyres, whose cars swept both sessions on Sunday, in varying conditions.

The #11 Gainer GT-R was second-fastest with Hironobu Yasuda at the wheel this afternoon, just three-thousandths of a second ahead of the #4 Goodsmile Hatsune Miku Mercedes-AMG GT3 of Tatsuya Kataoka in third. Formula 4 graduate Kohta Kawaai was fourth-fastest in the #52 Saitama Toyopet GreenBrave Toyota GR Supra, and after stopping on track early on, fellow rookie Oyu got back on track and was fifth-fastest in the #55 ARTA NSX GT3.

Best of the Mother Chassis runners was the #2 Syntium Apple Lotus Evora MC in tenth, with the fastest lap set by returning two-time GT300 and GT500 Champion Masataka Yanagida.
And with that, a seemingly eternal off-season of training and preparation, disjointed like the rest of our day-to-day lives in the age of Coronavirus, is complete. It now seems unfathomable that now there are just three weeks left until the 2020 Super GT season actually starts on 19 July, from this same venue at Fuji Speedway.