A pitstop timing error for the debuting (and polesetting) #6 Haupt Racing Team (HRT) AMG GT3 Evo handed the win at the first NLS race of the 2020 season to #34 Walkenhorst Motorsport and their BMW M6 GT3, Maro Engel’s late-race pass and gap on David Pittard more than counted out by a post-race 37 second time penalty. 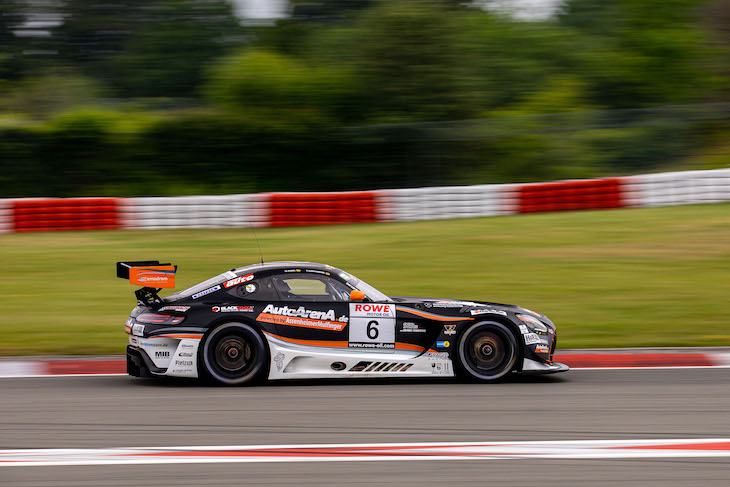 The win then went to Pittard and team-mate Mikkel Jensen ahead of Engel and his driving partner Patrick Assenheimer with the podium completed by Mercedes-AMG Team GetSpeed’s #2 AMG GT3 Evo of Maximilian Buhk, Raffaele Marciello and Fabian Schiller.

The race was held, for the most part in dry conditions after early race drizzle dried, the forecast of storms not materialising, and the 4-hour race produced some excellent pace and close battles both for the overall win and in other key classes. There were 132 starters from the original 141 car provisional entry. 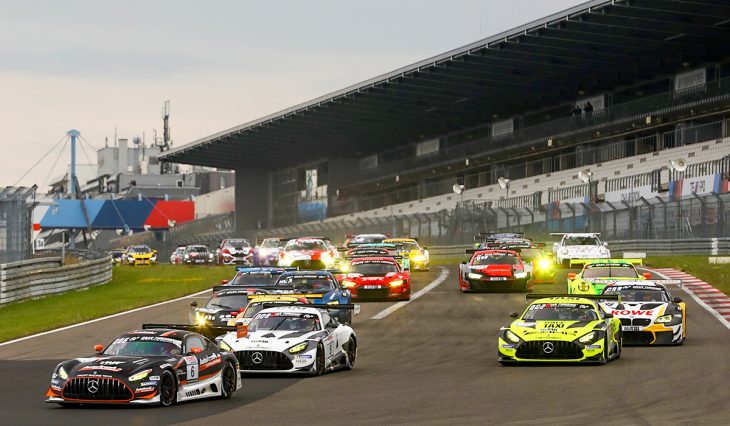 Assenheimer shone in the early running, making his way to the lead early on and pulling out a lead of around 10 seconds, the #6 would lead 12 of the 27 laps completed, losing the lead twice in the pits, including the stop that incurred the penalty.

Fellow starter David Pittard would make rapid progress up from fifth on the grid to a strong second-place, thereafter the #34 was always in the hunt. 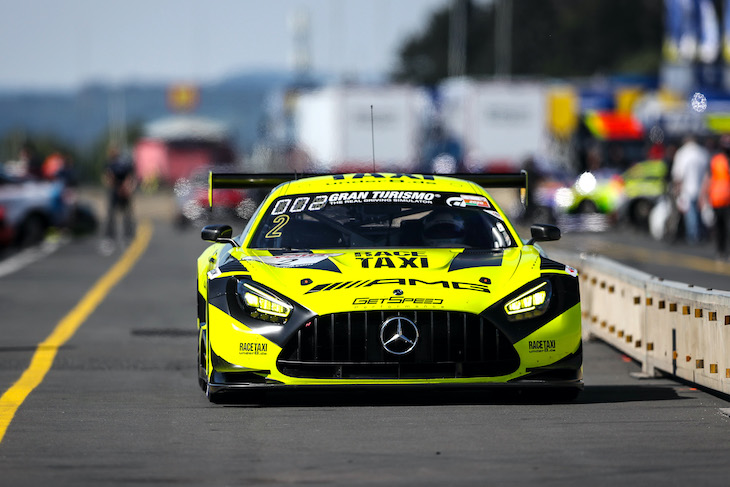 The #2 Mercedes-AMG Team GetSpeed ​​won out for the final podium slot in the final phase of the race in a close battle with the #15 Phoenix Audi. Just a few seconds separated the battling pair at the start of the 27th and final lap but Beretta’s efforts would be foiled by a collision in traffic, the #15 dropping back to finish an eventual seventh as the damaged Audi limped home.

Fourth place went to Robin Frijns, René Rast and Nico Müller in the #32 Audi R8 LMS from Car Collection Motorsport. Philipp Eng and Nick Catsburg finished fifth in the #99 BMW M6 GT3 from ROWE Racing, ahead of Julien Andlauer, Matt Campbell and Lars Kern in the #911 Porsche 911 GT3 R from Manthey-Racing, the delayed Phoenix Audi and the Falken Motorsports’ Porsche which finished eighth ahead of the Octane 126 Ferrari which had lost time in the very early running after a spin into the gravel on the Grand Prix circuit. 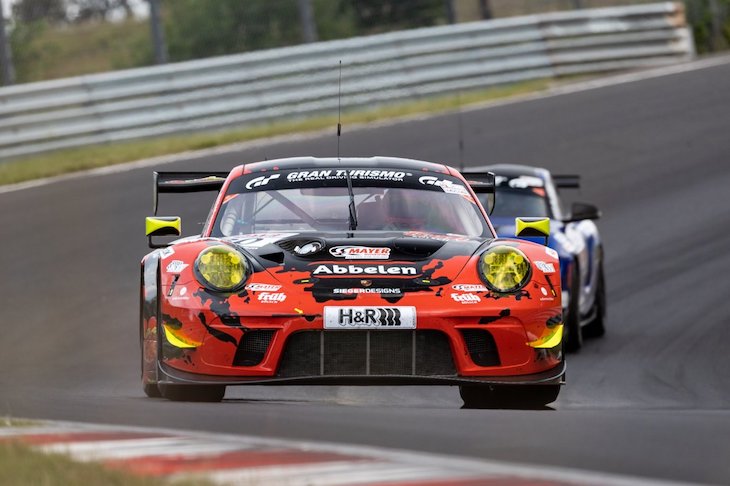 The Pro-Am SP9 class winner was the #30 Porsche 911 GT3 R from Frikadelli Racing with Klaus Abbelen, Lance David Arnold and Alex Müller, 11th overall. RacingOne would continue their class-winning success story into their new adventure in SP9, winning SP9 Am in their #39 Ferrari 488 GT3 with Christian Kohlhaas, Nicolaj Rogivue and Stephan Köhler.

In the major classes: 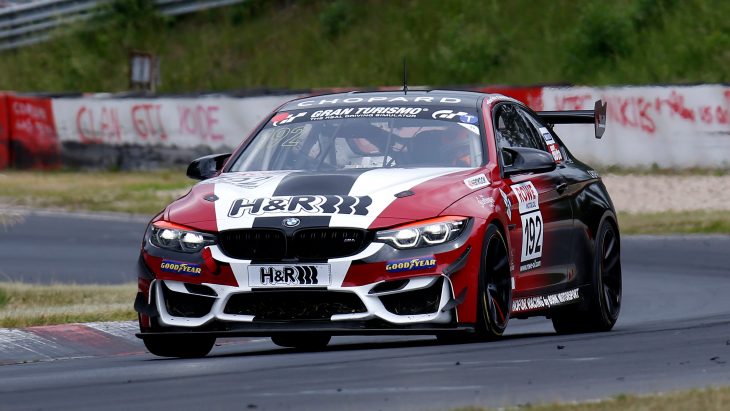 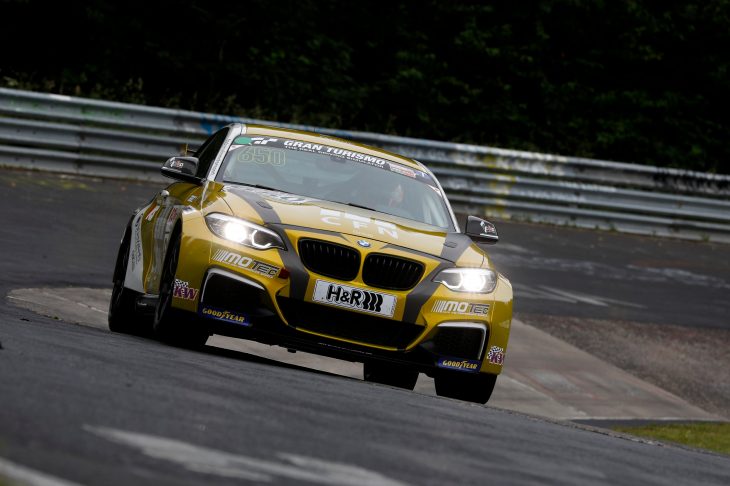 37th place and the hotly contested Cup 5 class win went to the #650 Pixum Team Adrenalin BMW M240i Racing Cup of Francesco Merlini, Sindre Setsaas, David Griessner and Yannick Fübrich. Some way further down the field the debuting Job van Uitert, Tom Wood and Josh Hislop came home 8th in class, but the finish means that all three drivers get on of their two required qualifying races for their ‘Ring Permit, van Uitert looking to squeeze in his second required NLS start later this year with no plans to step up to SP9 at present.

On a day though that saw the 100+ car paddock pulling together in a very different paddock environment everybody concerned was simply pleased to be back! 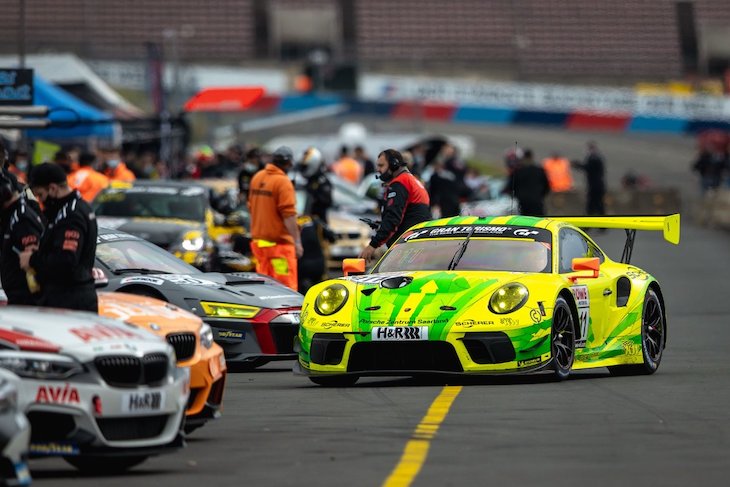 “My biggest thanks today go to the fans who have complied with our request to stay at home and follow the race in the livestream,” says Christian Stephani, Managing Director of VLN VV GmbH & Co. KG. “We have had a fantastic race day. We were very lucky with the weather. The rest was the result of our participants’ willingness to compromise and the tireless work of the organization team around the event. We have received a lot of encouragement from all sides and are now looking forward to the upcoming races with pleasure. And – here the circle will hopefully close again with fans on the racetrack soon. ”