The first time I walked the paddock with the DSC Editor back at Silverstone during the WEC’s first year, I made so many stupid errors. I didn’t make notes, I got into conversations I had no businesses being a part of and made the crucial mistake of believing I knew a lot more than I did.

I remember being rather starstruck at the time, surrounded by so many writers and paddock personalities I’d been following as a kid. But I still had – perhaps predictably – an excessive level of confidence for a teenager who had almost zero experience in the world of sport writing beyond editing a high school newspaper and writing a Le Mans guide which got me spotted in the first place.

Following that car crash of a pit walk Graham pulled me aside and ran me through my mistakes, he had this look on his face which said: ‘what have I got myself into?’ I was mortified. I was sure I’d failed, tripped over the first hurdle and became convinced that day that beyond my first weekend writing for DSC on-event, there would be no space for me.

But that didn’t happen, Graham (who has simply become family over the past decade) stuck with me, and I’m still not sure why…

After being told: “you should forget what you think you know, because in reality you know almost nothing about this sport” and “take a look outside at those grandstands, they’re full of people who wish they could be in your position. Never forget how lucky you are to be in this press room.” I began to soak up everything I could, I pushed hard week on week to improve. But I was awful so it took time, in fact it took years before I could even write a race report without help.

Both pep talks stuck with me, and to this day I’m still convinced I know nothing (the more I absorb the more I realise that there is so much more to learn). This whole time has been like chasing a car which gets faster every time you inch closer. However, I never took my time country-hopping with DSC for granted.

There were times when people have called me miserable, smirked when I got stressed, or pointed out the look of despair on my face while boarding a plane for a long-haul flight. All I can say is that it’s all because I cared, so much. Every time I looked like a deer in the headlights, or got so stressed I appeared to be hating it, it came from a good place. Deep down I loved every second.

I have always been so desperate not to let down the people who got me where I am today and taught me so much – be it Graham, Mark Howson, Chris Manning, Paul Slinger, Darren Cox, Marshall Pruett, Martin Little, David Lord, Doris, Pedro, Nick Bailey, Sue Baker, Adam Pigott, Dan Bathie, Stephen Errity, Skippy, Marcel ten Caat, and of course, my incredible family (the list goes on and on!). I cannot thank you all enough, I have always felt and will always feel in debt to all of you for putting up with me, being so patient and believing in my ability far more than I ever have.

It’s hard to believe how long I’ve been writing for DSC. It’s hard to believe how far I’ve come. It’s hard to believe what I’ve covered. There are infinite highlights, the Mille Miglia, my first trip to the Nürburgring for the 24 Hours, my first Sebring, Daytona, Fuji, Baku. The road trips to Monza and Paul Ricard were incredible, as was Cologne with Toyota. Being on hand for Audi’s final LMP1 race also stands out. The time Graham and I got lost for hours in Dubai in the middle of the night after a flight because I couldn’t read a map and we had no data was horrifying, but I still laugh to this day. There are so many stories from travelling the world, some of which need sharing in the future. 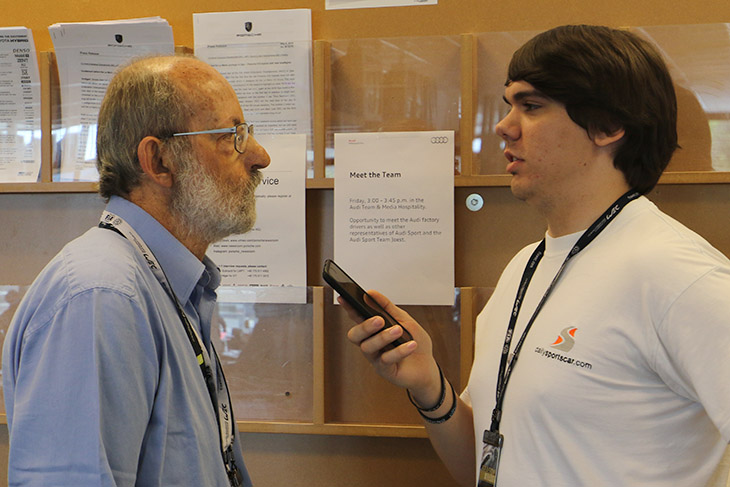 There have been lowlights, times when I messed up or things went wrong, but even they were memorable and real learning experiences.

I cannot tell all of you reading this just how proud I have felt over the years working alongside Graham and my incredible colleagues at DSC, everyone at RACER and of course, learning how to podcast with Marshall. For someone who loves sportscar racing, being a sportscar reporter is a privilege, more than some realise, and it always will be. I have always felt such a responsibility to readers, and the industry as a whole, whenever I have stepped into press rooms around the world to cover the sport I love the most. Because of that I always pushed as hard as I possibly could – and that, I feel, is my greatest achievement.

While this is by no means my final piece for Dailysportscar, (far from it!) I felt it necessary to share my thoughts and feelings as I step back from my role as Deputy Editor of this long-standing, reputable outlet, because this job has been my life for a decade. Now though, it’s time to start an exciting new chapter of my life working with Travel Destinations.

So thank you Graham, thank you Lordy, and everyone else who has stuck with me from my teenage years, right through to now. I hope I can still do you all proud in the future, when I’m in a paddock wielding a pass, marching in and out of garages and writing up stories.

And thank you DSC readers, you are an incredible, passionate bunch.