AIM Vasser Sullivan took their first-ever 1-2 result in GTD, the Lexus dominating the weather-delayed Daytona 240.   It would be the #14 RC F GT3 of Jack Hawksworth and Aaron Telitz that would claim top class honours ahead of the sister #12 Lexus of Frankie Montecalvo and Townsend Bell, Bell grateful for the delayed start of the race after arriving late due to travel issues from Indianapolis where he was on IndyCar TV duty.

Telitz, in his first race as the team’s new full-season driver, a late replacement for Parker Chase who stood down just days ago, led virtually from the start before handing over to Hawksworth who continued to dominate. It would be the first IMSA win for Telitz in just his sixth start after contesting the enduro race in 2019 with the team and the Rolex 24 Hours in January, Hawksworth meanwhile would take his fourth victory (three in GTD).

The double podium finish marks the second for the AVS RC F GT3 race cars, having also accomplished the feat at Detroit Raceway at Belle Isle Park one year ago with a first and third-place result.

In all the #14 would 81 laps (of 87) in class, starting effectively from pole after the initial pole setting Compass McLaren suffered a torrid time, starting from the pit lane after missing the reconnaissance lap due to an issue, serving a drive-through penalty and suffering an early race spin. 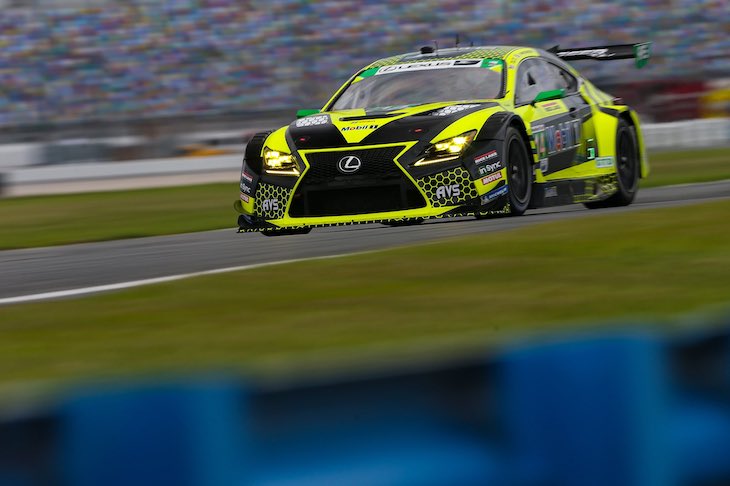 The #86 Meyer Shank Racing Acura NSX GT3 Evo of Mario Farnbacher and Matt McMurry completed the class podium after a spirited fight between the German and teammate Alvaro Parente in the MSR-run #57 Heinricher Racing entry once the sunset, MSR team owner Michael Shank there to see the closing stages, another man inbound from Indianapolis’ IndyCar event.

Parente eventually had to settle for fourth, with Toni Vilander completing the top-five in the #63 Weathertech Racing/ Scuderia Corsa Ferrari 488 GT3 Evo 2020.

Was your Lexus RC F GT3 as strong as it appeared to be in tonight’s race?
“I’m wearing a mask, but I can tell you I’m smiling. That was awesome. To be honest, my job was quite easy because Aaron (Telitz) quite frankly put all of the hard work in the beginning with a good qualifying lap, started upfront and then managed to get out front and get us a gap.

“Then, after that, once I got in it was just about maintaining and making sure we kept everything under control. The fuel windows were very tight for this race for either a two-stop or a three-stop, so we had to monitor fuel a little bit. I didn’t see another GTD car all day so I’m not complaining. The Lexus RC F GT3s were absolutely on rails all day. I’m super stoked to have Aaron in the car for the rest of the season. A great job by all of the team at AIM Vasser Sullivan and can’t wait for the next one.”

What was your stint like trying to maintain the lead that Aaron had set?
“To be honest, Aaron (Telitz) did most of the hard work there at the beginning. The conditions were obviously tricky. It was really important in qualifying to start at the front and Aaron put in a good lap and got us up there. Those conditions, drying track on slicks usually suit our Lexus RC F GT3 quite well. We’re able to generate temperature and Aaron got a really good jump and put a nice gap on the field.

“It was great to see the #12 car up there as well to make it a Lexus one-two. Once I got in at the stop, the track was pretty much dry. A couple of puddles but nothing really on the racing lines. At that point for me, we already had a gap and I just tried to maintain position and maintain the lead and bring it home. Fortunately, the Lexus RC F was working really well, and I’m absolutely delighted for myself, for the team, for Lexus and for everybody involved. A great job to everyone.”

What does it mean to get your first win in the Lexus RC F GT3 as you join the team as a full-time driver?
“I told Jack (Hawksworth) earlier in the week that my job today was going to be to make his job as easy as possible, so I’m happy that he thought it was easy to just cruise around out there. Our Lexus RC F GT3 was incredible today. Obviously, the two Lexus cars finishing one-two, we can’t ask for much more than that. Great team racing today for AIM Vasser Sullivan.”

How does it feel to earn your first career IMSA victory here at Daytona?
“Obviously, it feels great. It doesn’t get much better than this. The AIM Vasser Sullivan guys gave us a great Lexus. We put it up in the front, managed to start on the pole after one of the cars had a problem and then it was tricky conditions to start the race. I just managed to keep it on the race track, get a huge gap and hand it off to Jack (Hawksworth) and he took it home from there.”

How much did your past experience help with the tricky conditions to start today’s race?
“I think having a lot of experience on mixed conditions in my open-wheel career definitely translated here. Like Jack said, the drying track seems to suit the Lexus pretty well. We’re able to generate tire temp pretty easily even on a damp track. Just kind of played into our favour there at the start of the race. I just had to keep it on the track there and we were motoring ahead.”

What does this one-two podium finish mean for the AIM Vasser Sullivan programme?

“This is huge for us. I’ve got to give a shout out to IMSA and John Doonan and the team for putting together an event in really challenging times. That was big for us. What an honour today. We had the Lexus LC 500 lead us to the green. Fantastic there and then a dream day having the two AIM Vasser Sullivan RC F’s going one and two. This is certainly a ‘we can’ and ‘we will’ moment for these cars and for this organization. We couldn’t be prouder to be racing them.”