The pole position from Corey Fergus for Compass Racing adds McLaren to the roster of now 11 marques that have taken a first grid spot in modern IMSA history.

That means that every current marque in the class has now taken at least one pole position, plus, for that matter every marque that has ever competed in the class since 2014!

Corvette Racing’s 100th win in IMSA competition comes with the first win for the fourth different iteration of Corvette that the factory-backed Pratt & Miller operated team have fielded, the GTLM C8.R following the GTLM C7.R and C6.R and the GTS/ GT1 C5-R and C6.R 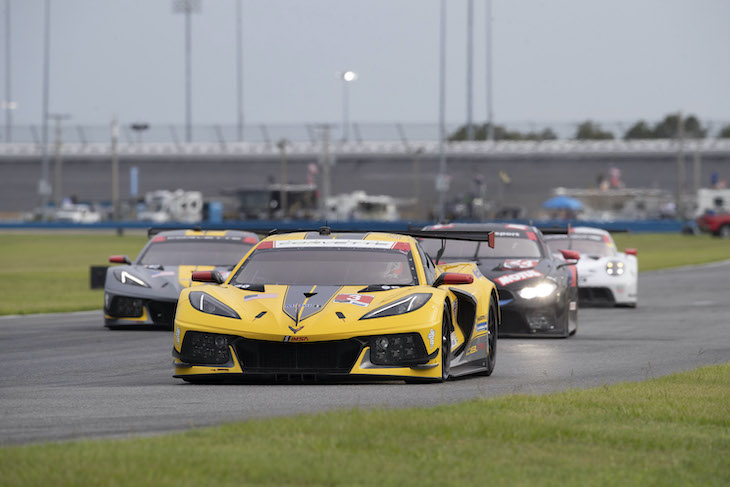 Add in the seven class wins at Le Mans and the total for the team is 107 wins – at 21 different tracks since  1999, bringing 12 Manufacturer championships along the way!

(Literally) No Pressure For Townsend Bell!

Townsend Bell’s planned trip to Daytona from the Indycar event at Indianapolis was not without real drama. The #12 AVS Lexus man arrived after the planned start time after an emergency in-flight aboard the chartered aircraft carrying him, and Team co-owner Jimmy Vasser to Florida:

“We had an issue in the sky. Any time the pilot pulls out the owner’s manual it’s generally not a good sign mid-flight.

‘It was one of those things where we could tell on takeoff that the pressurisation was kind of in and out. You could feel your ears plugging up and then releasing. I could hear the pressurization fan in the back of the plane going. I went up and talked to the pilots and they were like, “We know. We’re working on it.” So, we had to level off at like 12,000 feet while they were working on it and they said they weren’t going to be able to do this and we were going to have to go back to Indy. And, I was like there’s no way after all of the effort put into this that I’m missing the race.

“So, Jimmy Vasser and I kind of huddled with the pilot and we came up with the plan to fly low. The only problem is when you do that you burn fuel, so we didn’t have enough gas, so then the pilot said we’ll have to drop you guys and you’ll have to jump on another charter. We were like ‘Splash and go. Splash and go.’ So, we had a whole splash and go strategy worked out, but in the end, we were able to manually pressurize the cabin and climb to 27,000 feet, get better efficiency. It’s a long way of telling you we were so determined to be here tonight and I’m so glad we did!”