As part of the build-up to the inaugural Hankook 12H Monza this weekend, competitors have been invited to complete a parade lap of the Autodromo Nazionale di Monza’s hallowed Curva Nord and Curva Sud banking on Thursday.

Re-built in 1954 as part of an extensive redevelopment of the circuit following the Second World War, Monza’s famous banking was used at four Formula 1 Italian Grand Prix in 1955, 1956, 1960 and 1961, but was discontinued altogether from 1970 onwards on the grounds of safety.

All cars taking part in the parade lap on Thursday 9th will assemble at pit exit at 18.30 hrs local time. The lap itself will get underway at 18.50 hrs and is to be completed at no more than 60kph for what is being seen as a real ‘experience’ and one hell of a photo opportunity!

Free Practice and Qualifying begins the following morning at 09.30 hrs and 11.30 hrs respectively.

Constructed in 1921, and only the third purpose-built banked motor racing circuit in the world at the time after Brooklands in the UK (1907) and the Indianapolis Motor Speedway (1909), the Autodromo Nazionale di Monza originally featured both a 5.75km road course and the interconnected, 4.25km ‘Pista di Alta Velocita’ Oval. Run concurrently, as the Autodromo was for the Italian Grand Prix between 1922 and 1933 and F1’s four officials GP visits, the 10km configuration was one of the longest on the F1 calendar, third only to the Nürburgring and the original Spa-Francorchamps. 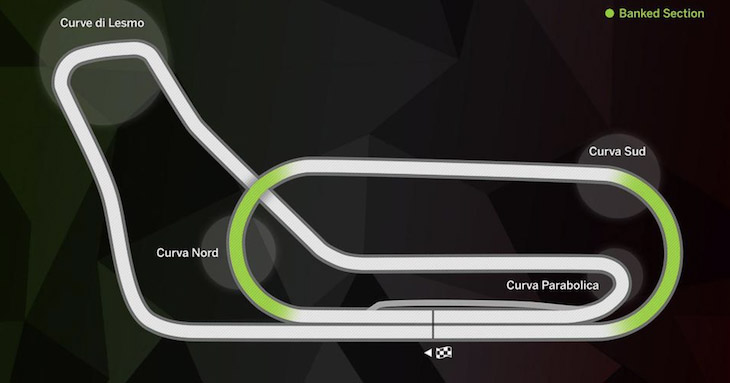 Connected by two straights, each measuring 1.22km in length, the Oval course’s two banked corners – Curva Nord and Curva Sud – boasted 21-degree banking, and, at the steepest point, peaked at a dizzying 80 per cent gradient. Built with a matrix of reinforced concrete, and with a radius of 320 metres, the banking was specifically designed to withstand speeds of up to 285kph. A terrifying prospect, given mid-century levels of competitor safety.

Indeed, safety remained a polarizing issue for Monza’s Pista di Alta Velocita well into the late 1960s. The abrasive concrete surface, in contrast to the asphalt used to build the road course, meant tyre blowouts and suspension failure were a habitual concern. Among the most notorious examples came on 10 October 1933 – dubbed ‘Black Sunday’ – when Giuseppe Campari, Baconin Borzacchini, and Stanislaw Czaykowski all lost their lives, in two separate incidents on the south banking, during that year’s Monza Grand Prix. Bar a short-lived revival in 1980, the Monza Grand Prix did not run again until 1948 and was gone altogether by 1952.

F1’s governing body was also having significant second thoughts by the mid-1950s. Though Juan Manuel Fangio and Sir Stirling Moss were both championed for their wins at the event in 1955 and 1956 respectively, a spate of tyre blowouts on the banking in ‘56 meant the Italian Grand Prix reverted to the road course for 1957 onwards. In 1960 though, and in a move rumoured to appease Scuderia Ferrari on home turf, F1 once again ran the oval, giving the Scuderia’s front-engined 246s a straight-line speed advantage compared with the newly rear-engined Lotuses and Coopers that had hitherto dominated the season. It worked. Phil Hill’s victory at Monza was the only one for the Scuderia all season, a result he repeated one year later en-route to F1 World Championship.

Tragically, at the 1961 Italian GP (again running the Oval), Wolfgang von Trips perished just two laps into the race when his Ferrari 156 collided with Jim Clarks’ Lotus heading into Parabolica, launching Von Trips up the grass banking and into the nearby catch fencing. The German noble later succumbed to his injuries, as did more than a dozen unfortunate spectators who had been leaning on the wire mesh at the time.

Though Von Tripps’ accident had not taken place on the oval, the decision was made to quietly revert back to Monza’s road course for good from 1962 onwards, the speed of contemporary Grand Prix machinery now too great for the outdated banking.

Though the Curvas’ F1 days were done, save a cameo appearance in John Frankenheimer’s 1966 film Grand Prix, the 1000km of Monza sports car race, first run in 1949, used the Autodromo’s complete 10km layout in 1956, and from 1965 to 1969. Albeit with two permanent chicanes now installed heading into both banked corners. Ironically or, perhaps, fittingly, the Scuderia won four of those six events (Ford and Porsche were the only outliers in 1968 and 1969 respectively).

With the 1000km of Monza returning to the 5.75km road course for 1970, the Pista di Alta Velocita was retired for good almost half a century, though the annual Monza Rally has continued to use sections of the Oval since 1978. Despite their dark heritage, Curva Nord and Curva Sud continue to be held in reverence by the motorsport community. Indeed, fan protests for their preservation saved both from being demolished altogether in the late 1990s, and, as a pilgrimage site for many motorsport historians, the banking was repaved entirely in 2014.