Raced Two – Won One! That’s the NLS record until at least Sunday afternoon for the newly minted Mercedes-AMG Team HRT.

Hubert Haupt’s team left their mark on the second race and took the first win on the Nordscheife for the Mercedes-AMG GT3 Evo, Maro Engel, Manuel Metzger, Adam Christodoulou and Luca Stolz winning the 60th ADAC Reinoldus 4 hour endurance race in the #16 car with a lead of 34.244 seconds over NLS 1 winners David Pittard and Mikkel Jensen, the pair racing this time out with Christian Krognes in the #34 Walkenhorst Motorsport BMW M6 GT3. 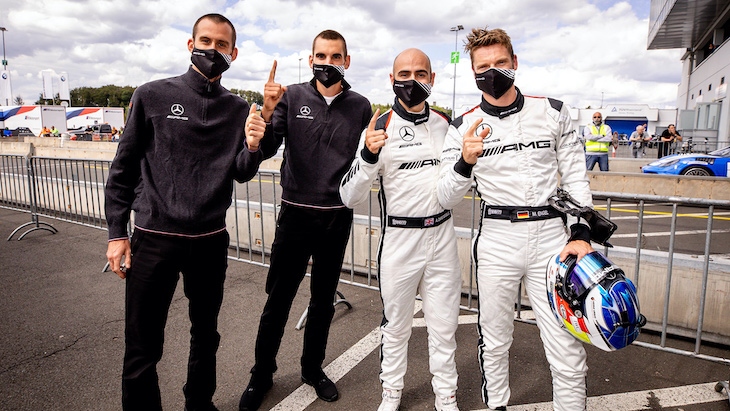 Fabian Schiller and Maximilian Buhk in the #2 Mercedes-AMG Team GetSpeed were also second-time podium finishers. But all of those records and more besides will last only until tomorrow as NLS 3, the second element of the first-ever double header in the Series, starts at midday local on Sunday.

It was a case of unfinished business for HRT after losing a win last time out to a time penalty, Starting from third, Stolz took the lead immediately and overall, the HRT Quartet led the field for 18 of 28 laps. 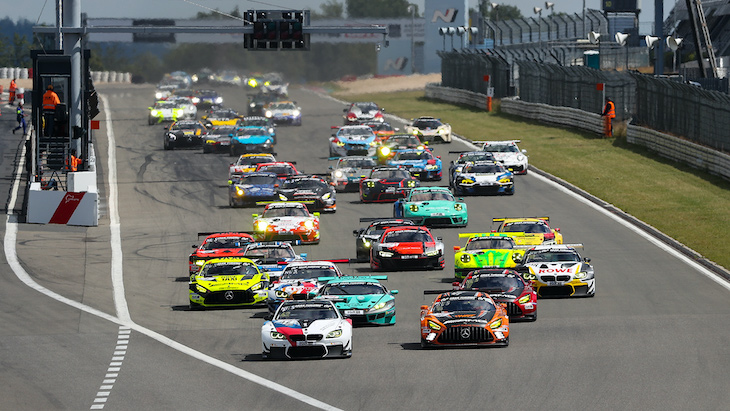 All four drove well but the efforts of Adam Christodoulou were of particular note, the Englishman extending the lead to give Engel a cushion to defend to the finish.

“The season can’t start much better,” said Metzger. “Luca got off to a sensational start and I was able to pull out a good cushion.  We already noticed during the test yesterday that we would be very strong. The result was the first victory for the HRT team and the first Nordschleife success for the Evo model of the Mercedes-AMG GT3. Now we are making an effort so that we will be at the top again tomorrow.”

Behind things were rather less settled until the penultimate lap when Pittard managed to finally make a decisive move for second in the BMW on the GetSpeed AMG.

Despite the strong finish, team-mate Jensen was not 100 percent satisfied with second place. “Unfortunately I screwed up the start,” the Dane admitted. “It was my first start in a Nordschleife race and I simply looked at the wrong traffic light. Suddenly Martin Tomczyk accelerated next to me and I could only react. Otherwise, it was a clean race. ”

Pittard though was happier to be looking to do better in NLS 3 today:

“The Mercedes was simply too strong today with a factory lineup of drivers. As a customer team, we can be satisfied with second place. But that is not our aim. Tomorrow we want to finish the race one place better. ”

Third-placed Buhk was also not satisfied with his start: “In turn one, I opted for the wrong side and regretted it all the way and lost some places. After that, I found myself in a good rhythm. The car was even better compared to race one. Especially in the fast passages, I had confidence in the car and was able to push more. ”

Fabien Schiller: “It is a good result. Now we will keep our fingers crossed for our teammates Maximilian Götz and Raffaele Marciello tomorrow, who will contest part two of the doubleheader in start number 2. ”

In qualifying, which was affected by some yellow phases, Augusto Farfus caught a very good lap and was the only driver to break the 8-minute barrier with a time of 7: 59.580 minutes. Together with Martin Tomczyk and Sheldon Van der Linde, the Brazilian finished fourth in the race.

Alexander Sims and Nick Yelloy finished fifth in the ROWE-BMW after last-lap heroics from Yelloly fell just short of grabbing a slot from the Schnitzer car. The Rowe M6 GT3 would though  in front of the fastest Porsche. Michael Christensen, Kevin Estre and Felipe Fernandez Laser drove the Frikadelli 911 to sixth place, this another effort that made a last-lap pass, the Porsche getting by the second of the GetSpeed AMGs, this the #8 car of Christer Jöns and Matthieu Vaxiviere, Jons just holding off another sprinting Porsche – the #911 Manthey car of Julien Andlauer, Mathieu Jaminet and Lars Kern.

Rounding out the top ten were the Octane 126 Ferrari and the first of the KCMG Porsches in their first NLS start.

SP9 Pro-Am was won by the #25 Huber Motorsport Porsche 911 GT3 R of Rocco Di Torrepadula, Marco Holzer, and Patrick Kolb. SP9 Am went to the  Racing one Ferrari 488 GT3 crew.