Herberth Motorsport secured a 1-2-3 finish at the Hankook 12H Monza after an incredible grandstand finish to CREVENTIC’s maiden event at the Autodromo Nazionale di Monza.

The longest endurance event ever to be held at ‘the Temple of Speed’ was briefly red-flagged on Saturday afternoon when a severe rainstorm made track conditions treacherous.

More drama was to follow though. Heading into the final 10 minutes, and having only just passed its sister entry on-track for the overall lead, the race leading #91 Herberth Motorsport Porsche 911 GT3 R (Daniel Allemann/ Ralf Bohn/ Robert Renauer/ Alfred Renauer) ground to a halt at the Variante del Rettifilo. The new leader, the sister #92 Herberth Motorsport Porsche 911 GT3 R (Jürgen Häring/ Taki Konstantinou/ Alfred Renauer) wasn’t out of the woods though either, and had to hold off the incredibly fast-charging third Herberth car, the #93 entry (Steffen Görig/ Stefan Aust/ Klaus Bachler), with Klaus Bachler pulling around 10 seconds out of the lead with every passing lap and setting the event’s two fastest laps in the process. 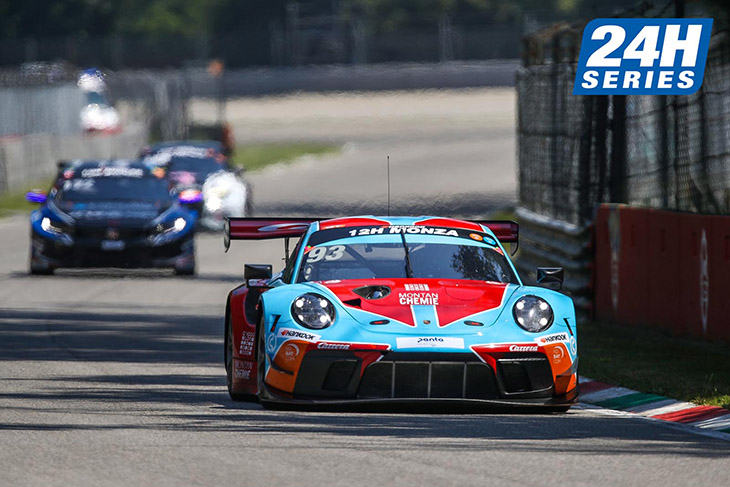 At the chequered flag, and after an incredible nail-biting finish, the top two Herberth Motorsport Porsches were split by less than half a minute after 12 hours of endurance racing, Jürgen Häring in the #92 911 GT3 R took the flag to complete 285 laps and secure the car’s second consecutive victory.

Despite its brutal bad luck, the #91 Porsche was still far enough ahead to claim 3rd overall and secure a podium sweep for Herberth Motorsport at Monza, 24H Series rules do not require teams to cross the finish line after the flag and score every completed lap of the race. 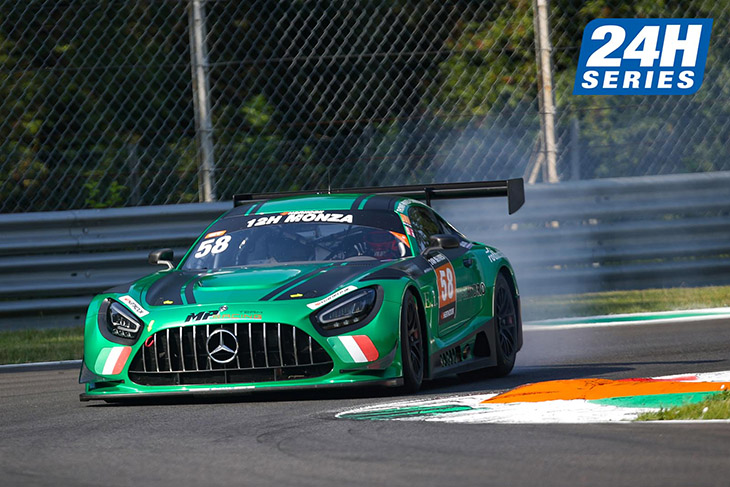 Laura Kraihamer’s storming opening stint meant that, from 8th on the grid, the KTM was already up to 5th overall after the first round of pit stops. By the time teammate Stefan Rosina stepped beneath the canopy, the X-BOW was up to 3rd. Astonishingly, there was more to come.

Rosina’s first big scalp was Steffen Görig, the Slovakian pulling a decisive move on the #93 Herberth to take the lead into Variante del Rettifillo, on merit, on lap 63. Admittedly it was a brief run at the front, Rosalina heading to pit road for his scheduled stop just four tours later. Even in that short space of time though, the KTM had pulled 2.5 seconds clear of the Porsche, the #93’s puncture meant teammate Eike Angermayr was back at the front by lap 75.

Perhaps more notable though was Reiter Engineering’s decision not to make a late-race pit stop for fuel and tyres before the chequered flag, a call that simultaneously threw a spanner in Herberth Motorsport’s strategy for the #91, running 3rd at the time. If Reiter Engineering, now just over a lap ahead, could keep the charging #91 Porsche (Daniel Allemann / Ralf Bohn / Robert Renauer / Alfred Renauer) behind in the closing stages of Friday’s race, that would leave only Herberth’s #93 entry on the same lap. High pressure stakes.

All credit due to Daniel Allemann, who threw everything at the KTM in the closing laps in an attempt to get past. Indeed, an opportunistic attempt to un-lap himself out of the second Lesmo could well have paid off had the German not run wide on the exit.

In a nail-biting finish, Allemann threw all he had at Angermayr on the run to the line, the Porsche falling less than a car’s length short of getting past the KTM and un-lapping itself. A sizable blow for Herberth Motorsport, as the #91 will now start alongside the sister #92 (Jürgen Häring / Taki Konstantinou / Alfred Renauer) on the second row, both now one lap behind the leaders.

Overnight though both the #91 and #92 Herberth Motorsport Porsches were credited one lap, both having taken the chequered flag ahead of their class leader. That meant all three Porsche 911 GT3 Rs and the pole-sitting Reiter Engineering KTM took the restart on the lead lap, with the KTM needing a fuel stop soon after the restart.

With the troubles in the second section of the race for the KTM though, the SPX Class win went instead to the #707 ARC Bratislava Lamborghini Huracán Super Trofeo (Miro Konopka/ Mato Konopka/ Mato Homola), which recovered from its own early electrical problems to finish 6th overall. The race’s only GT4 entry, the MDM Motorsport BMW M4 GT4 (#450, Tom Coronel / Tim Coronel / Jan Jaap van Roon) – secured its first category win of the season, despite suffering a front left puncture during the final hour of the race. Red Camel-Jordans.nl recovers from four laps down to take TCE the win at Monza Having lost track position on Friday afternoon, the Brutal Fish by KCMG Honda had systematically worked its way back up to the front of the TCE division, and was barely two minutes ahead of its nearest rivals when the Honda ground to a halt on the exit of the second Lesmo with less than 30 minutes to go. After being recovered to the pits, and following a very quick reset, Josep ‘Pepe’ Oriola Vila returned to the track to seal the Hong Kong team its first 24H SERIES podium in 3rd. Further drama was to follow as the Autorama Motorsport by Wolf-Power Racing Volkswagen Golf GTi TCR (#112, Miklas Born / Constantin Kletzer / Yannick Mettler), while running 2nd, went wide at Variante del Rettifilo. This damaged the front left corner of the VW, requiring a precautionary pit stop inside the final 20 minutes. The Swiss team was far enough ahead though to retain 2nd in-class and take its third consecutive TCR podium of the season.

That meant the Red Camel-Jordans.nl Cupra, despite losing four laps in the early going to suspension failure, completed a strong recovery drive to secure its first TCE class win of the season, Ivo Breukers driving the CUPRA across the line to complete 261 laps of the 5.793km Autodromo Nazionale di Monza. The result means Red Camel-Jordans.nl has also moved up to 2nd in the 24H SERIES Europe TCE standings, just 12 points adrift of reigning Overall TCE Teams’ champion, Autorama Motorsport by Wolf-Power Racing.

Impressively, all three of the top TCE runners managed to finish 8th, 9th and 10th overall at the Hankook 12H MONZA.

Sadly, despite being in contention for a TCE podium throughout the event, the AC Motorsport Audi RS3 LMS (#188, Stéphane Perrin / Vincent Radermecker / Mathieu Detry) was eventually withdrawn with an overheated engine.