Silver Division competitor Blackstock in the #93 Acura NSX GT3 led the field to green to begin the 90-minute contest held under hot and sunny 89-degree Fahrenheit conditions. Through turn 1 Blackstock nosed ahead of second-on-the-grid Pro/Am driver Kris Wilson in the #33 Winward Racing Mercedes-AMG GT3. Behind them Am Division pilot Fred Poordad in the #20 Wright Motorsports Porsche 911 GT3 R maintained his starting position slotting into third.

Behind them, a hard charging Barkey, in the #80 Acura NSX GT3 moved up into fourth, after starting sixth. By the end of lap 1, Blackstock had opened a 1.3 second gap over Wilson as the driver of the #33 machine held off challenges from Poordad.

By lap 3, Blackstock had opened a 2.2 second lead over Wilson. On the same lap, Fuentes in the #1 Ferrari 488 GT3 deftly passed Barkey for fourth through turn 15.

For the lap 7 restart, Blackstock perfectly timed the drop of the green and rocketed away leaving Wilson, Poordad and Fuentes in a three-way battle.

By lap 13, Blackstock had opened a 3.6 second gap on Wilson, who had pulled away from Poordad as Fuentes hounded the driver of the #20 machine for third. Poordad’s Porsche then suffered a mechanical issue through the climbing esses allowing Fuentes to move up into third. Poordad would limp his Porsche around the track and bring his machine into pit lane for repairs.

With the pit window open at the halfway mark of the race, Blackstock held a 6.5 second lead and remained out to maximize track position. On lap 21 with the window still open the racing gods struck as Wilson’s machine lost power and sat deadsticked on the edge of the racetrack. Race Control issued a full-course yellow and the lead Blackstock held vanished. Wilson was ultimately able to re-fire his machine and return to the track under power. Blackstock entered the pits to change over to Hindman but the damage was done, and a shuffling of positions ensued.

The lap 27 restart saw a new leader with Fuentes’ teammate Rodrigo Baptista behind the wheel and atop the charts ahead of Marcelli who took over the reins of the #80 machine from Barkey. Sitting in third was Hindman. Colin Braun, in the #04 DXDT Racing Mercedes-AMG GT3 was fourth, while his DXDT Racing teammate Ryan Dalziel in the #63 Mercedes-AMG GT3 sat fifth. Bill Sweedler, who took over for Megrue, came to the restart line in sixth and first in the Am class.

Marcelli began an immediate challenge of Baptista for the lead after the restart and through turn 17 skillfully executed a pass to head the field. Then on lap 30, Hindman passed Baptista for second.

For the balance of the race, Marcelli was able to maintain a comfortable gap over Hindman and at the checkered won by .654 seconds. Baptista crossed in third, ahead of Dalziel in 4th, and Braun in 5th. Sweedler crossed in 6th overall and first in Am Division.
“We had better pace at COTA than the results there really showed, it just wasn’t our race weekend,” said Barkey. “It’s a great turnaround for us here. I have to tip my hat to the Racers Edge crew and of course the Acura. It’s such a great car to drive.” 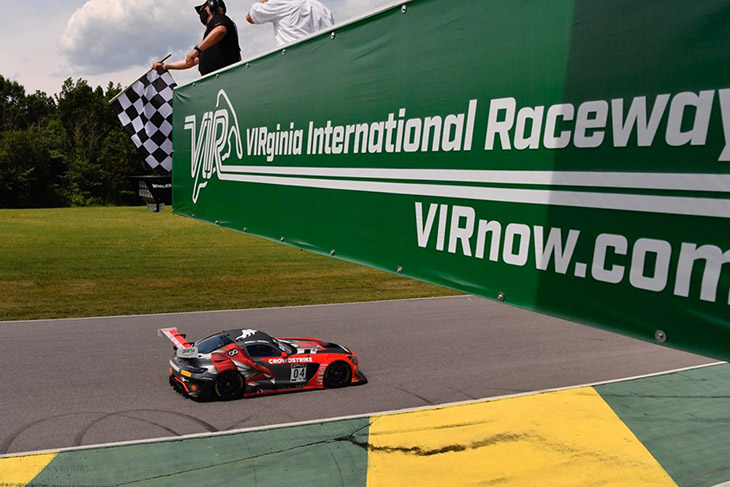 The 90-minute contest was held in hot and sunny 87-degree Fahrenheit conditions. From pole, Hindman, behind the wheel of the #93 Racers Edge Motorsports Acura NSX GT3 led the field to the green flag and launched successfully to head the pack through turn 1. Behind him, Braun, in the #04 DXDT Racing Mercedes-AMG GT3 slotted into second, with DXDT teammate Ryan Dalziel in the #63 Mercedes-AMG GT3 holding off a challenge from Am division driver Max Root in the #20 Wright Motorsports Porsche 911 GT3 R. Marcelli, in the #80 Racers Edge Motorsports Acura NSX GT3, gained a position up into fifth over TR3 Racing’s Rodrigo Baptista in the #1 Ferrari 488 GT3. Hindman would then open a gap of over two seconds on Braun as the top sixth settled in and hit their marks maintaining their track positions.

With the 10-minute pit window open at the 40-minute mark of the race, Marcelli passed Root for fourth, while Hindman was the first driver to enter the pits relinquished the lead to Braun. At the end of the pit window the lead order had shuffled with Kurtz now behind the wheel of the #04 machine in the lead, Barkey in the #80 machine in second, Blackstock in the #93 machine in third, Poordad in the #20 machine fourth, Askew in for Dalziel in fifth and Fuentes in for Baptista in sixth.

Race Control then issued a drive-through penalty to Blackstock for a pit lane speed violation when Hindman entered for the changeover and the penalty was served on lap 31. The top four then shuffled to Kurtz, Barkey, Askew, and Poordad. With Barkey, Askew, and Poordad in a heated three-way battle, Kurtz grew his lead to 7.4 seconds. Behind them, Fuentes was on a charge and had closed the gap to Poordad to two seconds by lap 38 and by lap 39 joined to make it a four-way battle. A lap later Poordad’s Porsche suffered a mechanical issue at the Oak Tree Turn and Fuentes then began a pursuit of Askew.

Kurtz would stretch his lead to 10 seconds, while a heated battle raged behind him. With Poordad’s machine deadsticked on the edge of the track, Race Control issued a full-course yellow bringing the field back to Kurtz for the lap 42 restart. Fuentes would then slide past Askew through turn 1 and into 3rd.

In the action-packed final laps of the race, Kurtz, Barkey, and Fuentes ran nose to tail and at the checkered Kurtz crossed the line by a mere 0.226 seconds over Barkey, 0.713 seconds ahead of Fuentes.

“When I saw the car stopped on the back straight (Poordad’s Porsche), I knew we were going to have a restart and I knew the fight was going to be on. With a couple of minutes left I just buckled down and focused on pulling a gap on Barkey. It’s a special win with Colin.”

“It’s a super special win today. Seeing the way the race unfolded. We had a gap there but then when the yellow came out. It fell back on George’s shoulders to really push hard there at the end,” said Braun. “To see George finish off the race as he did; George really had to earn the win today,” said Braun.

With the win, Kurtz and Braun leave Virginia tied for the Pro/Am driver’s championship lead at 73 points with Fuentes and Baptista. Teams and drivers next look to California and Sonoma Raceway for Rounds 5 and 6 of the championship.