McQuarrie preserved fuel for much of his stint and stayed out longer as other cars came to the pits for fresh tyres. That strategy call worked as the team did not need to spend as much time filling the car with fuel during the stop.

“The guys killed it in the pit stop it was a super fast stop, we stretched his [McQuarrie’s] fuel so we could fill a little less and try and get out of pits quickly,” Westphal said after the race.

“I had no idea where I was going to arrive on the back straight and where the cars with hot tyres were going to be. It was a question mark that was answered shortly and then I had to get some fresh air and go go go,” said Westphal.

The race was heavily impacted by lightning and foul weather that caused a one-hour red flag and forced the race to end behind the safety car. It rained during the red flag but most teams opted to stay on slick tyres when the race went back green.

Kyle Marcelli and Nate Stacy in the #60 Kohr Motorsports Aston Martin Vantage ended the race in second. Marcelli was just over two seconds behind Westphal when the full-course yellow that ultimately ended the race came out.

The #7 Archangel Motorsports Porsche Cayman of Trent Hindman and Alan Brybjolfsson rounded out the GS podium.

The #96 Turner Motorsports BMW M4 and the #71 Rebel Rock Racing Camaro GT4 both stopped on track as a result of mechanical gremlins. There were no serious incidents in the race.

In TCR, Bryan Herta Autosports scored a 1-2 finish in the Hyundai Veloster N entries. The #21 Hyundai of Mark Wilkins and Harry Gotsacker bested their teammates Michael Lewis and Mason Filippi in the #98 Hyundai. 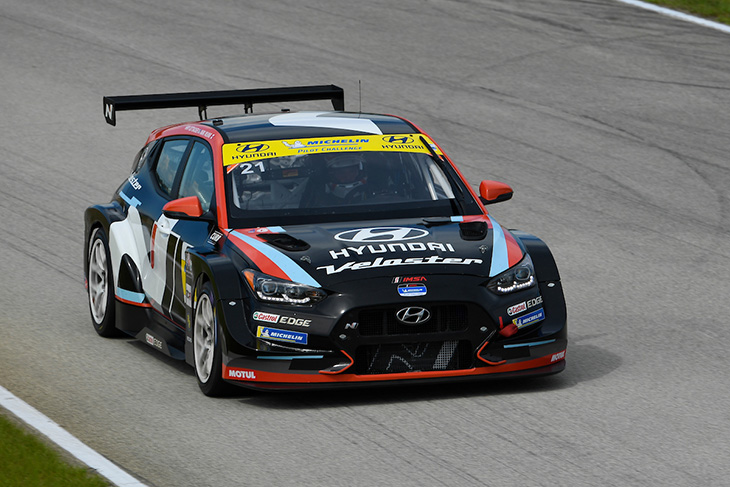 The #47 Forty7 Motorsports Hyundai Veloster made it a clean sweep of the podium for Hyundai. Ben Waddell started the car and teammate Alex Papadopulos finished the race but did not have the pace to mount a serious challenge to the Bryan Herta entries.

The Michelin Pilot Challenge series heads next to Road America at the end of July.