Perfect weather in the South of France at the always spectacular Circuit Paul Ricard saw the opening weekend for the brand new for 2020 Ligier European Series.

A double-header of one-hour races saw some familiar names to the fore, in both the teams and the drivers.

Happily, though there are some new names to get used to as the Series delivered on its promise to develop and enthuse new blood for international Sportscar racing.

With a unique format for a one-make Series, featuring both GT (the Ligier JS2 R) and Prototype (Ligier JS P4) there’s plenty to look out for as both new and more experienced drivers look for the limits of their chosen machine.

The first races would see a new name from a team that DSC readers know well take both wins in the JS2 R class,

In the JS P4 class, there were teams and drivers new and old too – with no lack of racing action.

The first-ever Ligier European Series race got underway at 10:50 am for an hour of intense racing. No refuelling, no tyre changes, just one stop between the 28th and 32nd minute of the race for a driver change or an 85 second mandatory stop for drivers going it alone.

In the JS2 R category, the #45 of Victor Shaytar and the #46 of Alex Marchois from MV2S Racing occupied row one. But from the start, the #81 Milo Racing JS P4 with Kevin Balthazar aboard came from the rear of the field in pursuit of the JS2 Rs, followed closely by the #50 from HP Racing Team and its Italian driver Andrea Dromedari.

Victor Shaytar resisted, but eventually ceded the lead of the race to the #81 JS P4 on lap seven, then dropped behind the #50 on lap ten. The #74 Cool Racing JS2 R and MV2S Racing #46 were just behind.

Pit stops. The MV2S Racing #45 JS2 R was first to make its compulsory stop. Mikhaïl Makarovskii took over but the #46 JS2 R sister car made the best driver change and moved up to first place in the category with Antoine Chapus at the controls.

The Cool Racing #74, still driven by Sébastien Baud, confirmed its speed from practice and battled for first place of the class with the #46 and soon took the position.

The two MV2S Racing JS2 Rs, #45 and #46, each received a stop and go penalty for not respecting the minimum times for the compulsory pit stop.

The #74 Cool Racing entry with Sébastien Baud onboard took class honours, making his way to the front after qualifying third.

The #66 M Racing car of the father and son team of Erwan and Natan Bihel and the #38 HRC crew of Marc Guillot and Jean-Marc Thevenot completed the podium. 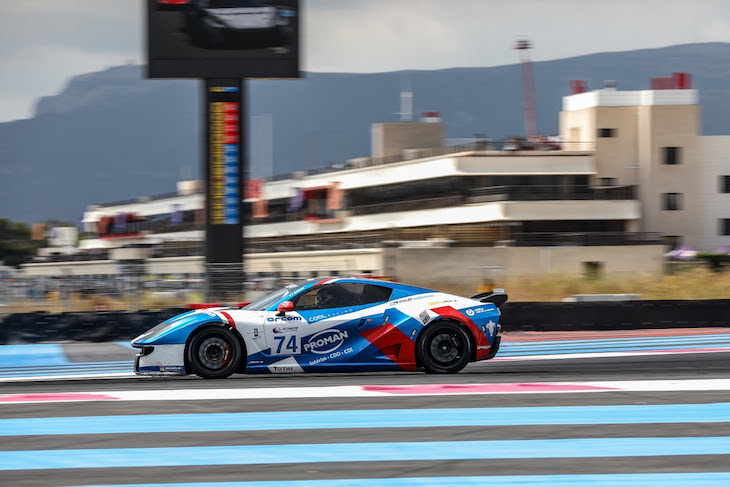 Conversely, the #86 M Racing JS2 R fell victim to contact on lap one and retired. It was the same for the Arctic Energy #17 on lap four. Contact also for the M Racing JS2 R #69, but that didn’t stop Laurent Millara from returning to the race and finishing fifth in the category. The #30 CD Sport, after an electrical problem, was prevented from crossing the finishing line.

In the JS P4 class, after the pit stops, the #50 HP Racing Team JS P4, still with Dromedari behind the wheel, took the lead ahead of the #81 Milo Racing JS P4.

Julien Schell in the #33 JS P4 put in a fine run up the order, setting the fastest lap of the race in 2:03.306s, with the other Larbre Compétition JS P4, the #34 of Valentin Simonet right behind.

Andrea Dromederi wins race one in the JS P4 category, after having won the mid-race battle with the Belgian team, Milo Racing #81 and its duo of Kevin Balthazar and Christophe Nivarlet. A fine showing from the youngster Kevin, who was injured Thursday afternoon. The #34 Larbre Compétition JS P4 and its tandem of Valentin Simonet and Alexandre Yvon finish third. 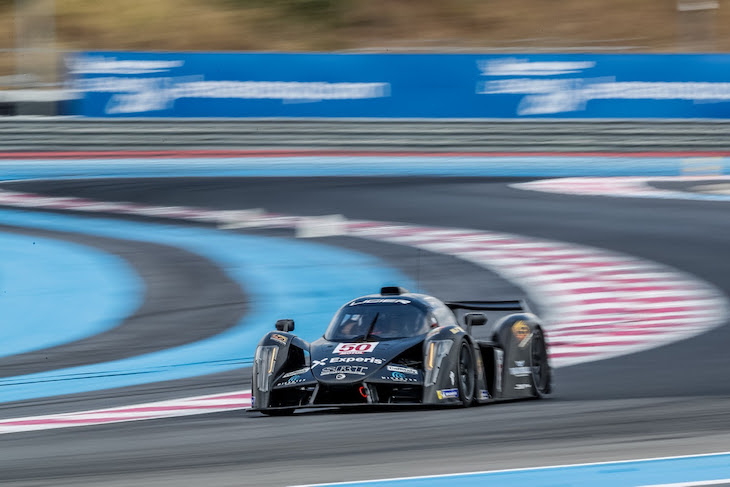 A rather different podium, which takes place remotely from the pit lane and paddock under conditions of strict sanitation, saw the victors in each category presented with their trophies. 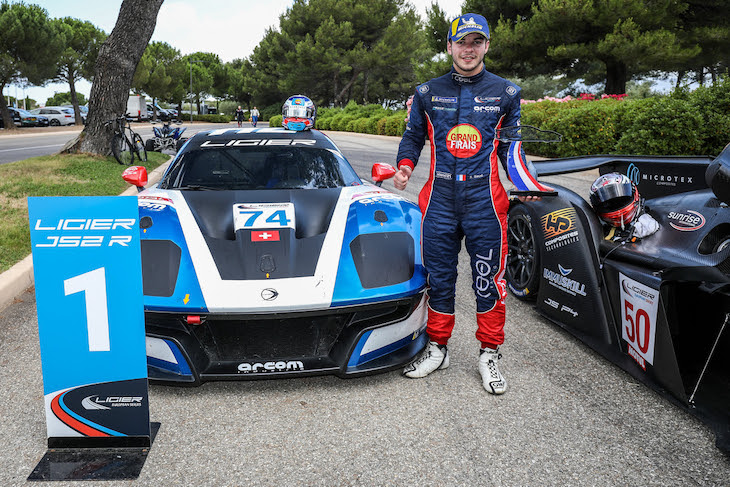 “I quickly climbed back up to the top of the order in setting the same times and by being consist. Our pit stop was okay and we will try to do even better in race 2. To win both races today is as good as it gets.

“The Ligier JS2 R is a fantastic car with a very nice balance. We like that because we can be aggressive from the start to the finish. It stays on pace over an hour, with super Michelin tyres that hold have as much endurance as you would want. It’s going to be a great season! “

“The Ligier JS P4 is a very good car, easy for a beginner as well, and even if I am used to driving a Ligier JS P3, it has nothing to be envious of. I know I’m really going to enjoy myself and have a great experience.”

The drivers and cars have little time to rest before the second battle of the day, just three hours after race one.

Julien Schell got an outstanding start in the #33 Ligier JS P4 to pull past pole man and Auto Hebdo journalist and track tester Valentin Simonet in the #34 Ligier JS P4. Andrea Dromedari in the #50 HP Racing Team entry ran third, while Christophe Nivarlet in the Milo Racing #81 made a strong move up the order.

Marc Guillot in the #38 HRC Ligier JS2 R moved immediately past race one winner, Sébastien Baud in the #74 Cool Racing Ligier JS2 R for fourth place. A fine duel developed early in the race between the two who started from first and second position in the category. Laurent Millara in the #69 M Racing entry ran third in the class.

The #30 CD Sport Ligier JS2 R driven by Baptiste Berthelot stormed his way from last on the grid to fifth place, but received a drive-through penalty following a collision with a GT car that definitively dropped him to the very back of the field.

After the mid-race pit stops, the top-three order in the two categories remained intact. The battle continued in Ligier JS2 R between the #74 and the #38, which finally lost ground and fell down the running order.

The #45, with Victor Shaytar behind the wheel attacked the JS2R category leading #74 and was successful despite the resistance of Sébastien Baud to take the lead.

Almost immediately though the double ELMS and WEC class Champion had to give up the position when he had to serve a 15-second stop and go penalty for taking too short a pit stop at the driver changeover. The #74 Cool Racing JS2 R retook the lead in its category, followed by the two M Racing Ligier JS2 Rs, Natan Bihel in #66 and Laurent Millara aboard #69.

The two MV2S Racing cars, the #45 of the Russian drivers Shaytar and Makarovskii, and the #46 of Marchois and Chapus, finished just off the podium, followed by the #38 HRC entry. Victor Shaytar in the #45 car set the fastest lap of the race with a time of 2:05.678s.

Sébastien Baud in the Cool Racing #74 made a clean sweep of the weekend in the JS2 R category scoring both race wins.

The Bihel father and son combo in the #66 from M Racing scored two runner-up results in what were two very hard-fought races. 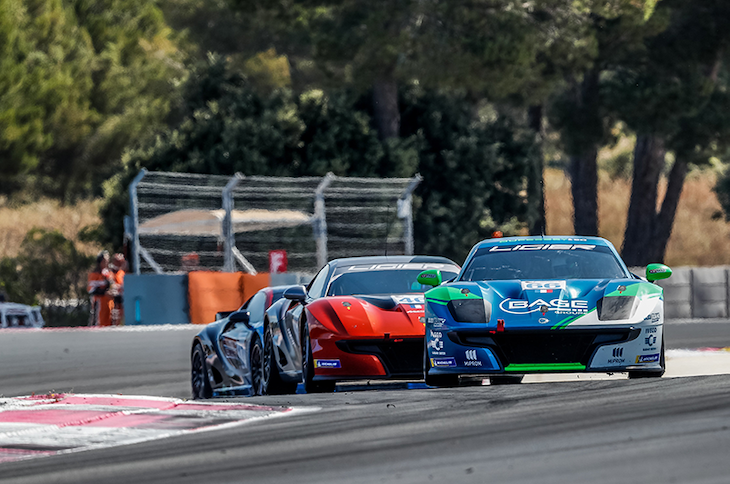 In the sport-prototype category, the #81 Milo Racing JS P4, in the hands of Kevin Balthazar, finished its run towards the sharp end of the order in third place where the #50 from HP Racing Team held onto the lead from the #34 from Larbre Competition until the final lap.

Alexandre Yvon in the #34 car snatched the victory away from race one winner Andrea Dromedari. While the #33 JS P4 of Julien Schell and Thomas Duchene had to settle for fourth place in the category, Julien posted the fastest lap of the race with a time of 2:02.609s. 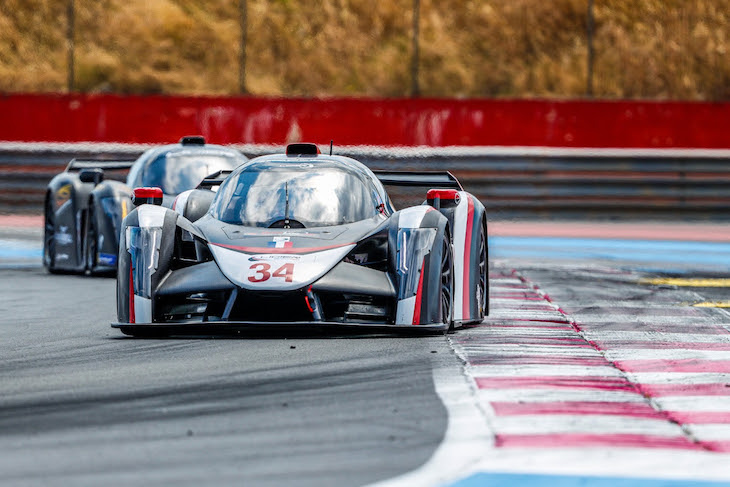 “I’m really happy and proud to have won race two. I started from pole and controlled the race for an hour. I was really bothered by an experienced Russian driver who was right behind me and we had a brief battle, but it went my way and I crossed the finish line in the lead. I am really happy for the team. We will continue to work to do the same at Spa!!!”

“They told me on the radio that the JS P4 #50 was first so when I passed the #50 at the end of the race I thought maybe I’m first or maybe the lap before was the last lap and I missed something.

“Unfortunately for the driver of the #50, he seemed to have a problem and we did win! It was my first time at Paul Ricard and my first time with the car. First time for everything!”

“I pushed very hard at the beginning and tried to set a gap with my the other drivers and my teammate did a good job and improved a lot over the weekend. It’s very nice to finish like that.

“It was an honour to race with Larbre Compétition. Before coming here I didn’t know what to expect because it’s a special car, a kind of batmobile.

“In the car, it felt like a real prototype but an easy-to-drive one. You feel like it’s the first step of the endurance pyramid, before LMP3 and LMP2. I think that for drivers who want to go to the 24 Hours of Le Mans or to the ELMS/LMC it’s a great way to get to know the tracks and to train for this kind of endurance races as the JS P4 chassis is derived from an LMP3. And of course, it’s fun!”

“What a first! I’m very happy with this first Ligier European Series weekend. I want to thank the Ligier teams and drivers for their trust and participation. Starting a championship is always a challenge. The current circumstances make this season’s start even more exceptional.

“And it would have not been possible without the organisation of the ELMS team and the support of our partners Michelin Motorsport, Total and Stand 21. As imagined, the Ligier European Series plays its role of being the first step in the Le Mans endurance world, in GT as well as in sports prototype. This first heat shows a lot of promise for the rest of the season. We are all looking forward to being together at the next heat at Spa!”

Rendezvous for the second heat of the season, at Spa-Francorchamps in Belgium on 7-8 August 2020.