The 2020 Autobacs Super GT Series opener at Fuji Speedway will be shown live and free around the world on The Race Media Ltd.’s YouTube channel (previously Let’s Go Racing and NISMO TV). The broadcast is scheduled to start Sunday at 6:30 AM BST, thirty minutes before the green flag.

A season that was already delayed over three months due to the coronavirus pandemic was delayed even further, as heavy fog rolled over the town of Oyama and delayed the start of Saturday afternoon’s practice session by an hour and 15 minutes, getting underway at 5:15 PM local time. With the delays and sunset approaching, the practice was shortened down to 90 minutes, as opposed to the original 110 minutes.

Early in the session, the front-engined 2020 Honda NSX-GTs, and in particular, the three Hondas on Bridgestone Potenza tyres wasted little time finding the pace on a green track.

The final 10 minutes of practice was the GT500 exclusive run, giving teams to make their qualifying simulations and shoot for the top spot. Tomoki Nojiri was now at the wheel of the ARTA NSX, and with just under two minutes remaining, he’d improved to a 1’27.279.

But as the chequered flag fell, a flurry of fast times rolled in – and it was the Raybrig NSX that took the top spot, with Team Kunimitsu’s new recruit Tadasuke Makino continuing his form from pre-season testing. Makino’s fastest time of the day was a 1’27.248 – just 0.031 seconds up on Nojiri’s best time, making it a very close Honda/Bridgestone 1-2 in the end. 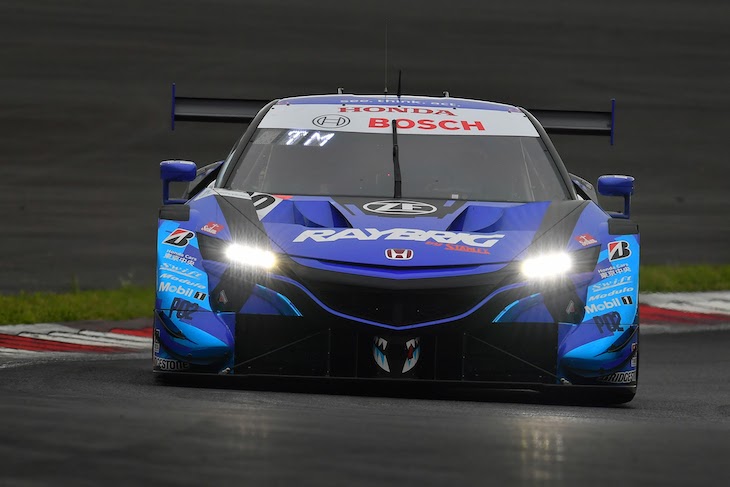 Reigning GT500 champion and super-sub Kenta Yamashita was third-fastest in the #39 Denso Kobelco SARD GR Supra, 0.122 seconds adrift of Makino’s best time. GT500 newcomer Sacha Fenestraz was 4th in the #36 au TOM’s GR Supra, followed by the #37 KeePer TOM’s GR Supra of Nick Cassidy in 5th, the #38 ZENT GR Supra of Hiroaki Ishiura in 6th, the #14 Wako’s Supra of Tsuboi in 7th, and the #17 Keihin NSX of Tsukakoshi in 8th.

Best of the non-Bridgestone runners was the Yokohama-clad #16 Red Bull Motul Mugen NSX-GT of rookie Ukyo Sasahara in 9th, ahead of the #19 WedsSport Advan GR Supra of Ritomo Miyata in 10th.

Then the two Michelin-clad Nissans were 11th and 12th, with the #3 CraftSports Motul GT-R of Katsumasa Chiyo leading the #23 Motul Autech GT-R of Ronnie Quintarelli – a tough start to the weekend for the embattled Nissan stable after lacking one-lap pace during the pre-season test.

In GT300, the Bridgestone-clad runners had the early advantage. After the first half-hour, two-time and reigning GT300 champion Shinichi Takagi, who boasts a record nine GT300 class wins at Fuji – was leading in his black and orange #55 ARTA Honda NSX-GT, with a fastest lap of 1’28.817, two-hundredths of a second up on the black #65 LEON Pyramid Mercedes-AMG GT3 of 2018 champion Naoya Gamou.

Gentleman driver Hiroaki Nagai had a spin at Panasonic Corner (Turn 16) in his bright yellow #30 Toyota GR Sport Prius PHV apr GT, but the incident did not bring out a red flag.

In the 10-minute GT300 exclusive run, it was the Mooncraft-designed #2 Syntium Apple Lotus Evora MC of two-time GT300 and GT500 Champion Masataka Yanagida – taking part in his first Super GT race since the 2018 Fuji 500 Miles – clocking the fastest time of the session at the end, with a best time of 1’36.719. 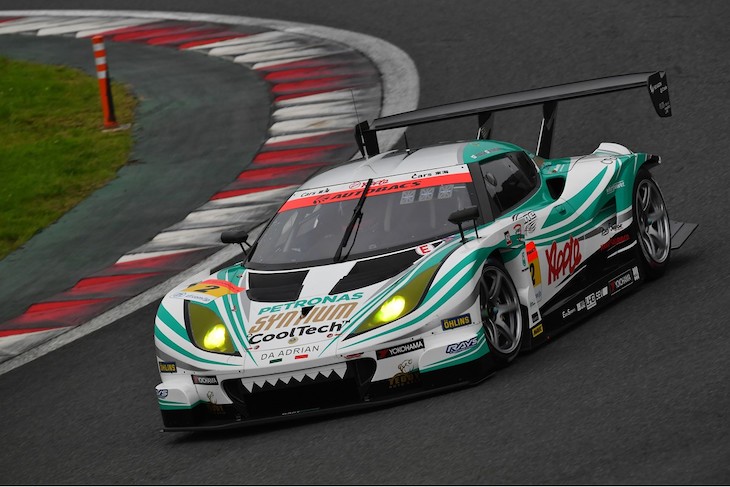 The Mother Chassis Lotus showed its teeth, quite literally! in its first session of 2020 as it jumped ahead of the ARTA NSX GT3 and LEON AMG in 2nd and 3rd, followed by a pair of Dunlop runners, the #11 Gainer TanaX Nissan GT-R GT3 of Katsuyuki Hiranaka in 4th, and the JAF-GT300 spec #61 Subaru BRZ R&D Sport of Takuto Iguchi in 5th.

It was a more even mix among Yokohama, Bridgestone, and Dunlop rubber in the top 10 – but you’ll have to go back to 15th to find the fastest Michelin-clad car, the #60 Syntium LM Corsa Lexus RC F GT3, with rookie Shunsuke Kohno setting the car’s fastest lap.

On the left side, “Arigatou, Thank You Medical Staff”…

…and on the right sid,- “Ganbarou, Let’s fight together”.

Hoppy Team Tsuchiya will carry the message “Racing together with you!” on the bonnet of their Porsche 911 GT3-R, to show their support for the many fans watching from home, among them, Super GT’s Japanese lead commentator Sascha Boeckle, who was hospitalized last week after testing positive for COVID-19. 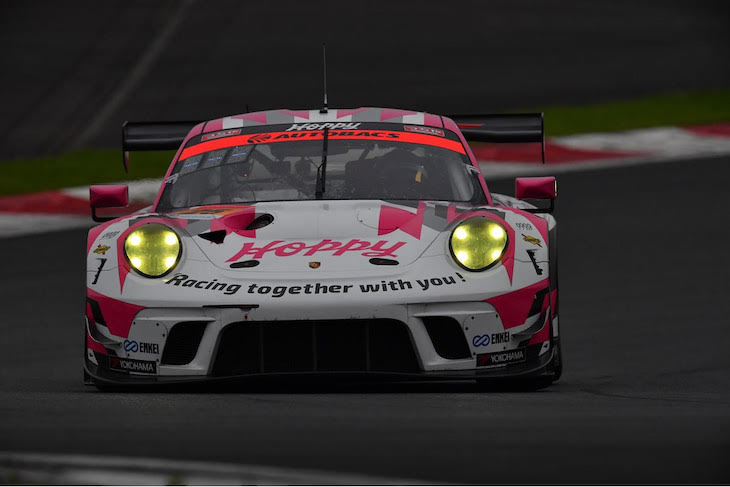 There was good news from Sascha-san today, as he was discharged from hospital after recovering from his symptoms. 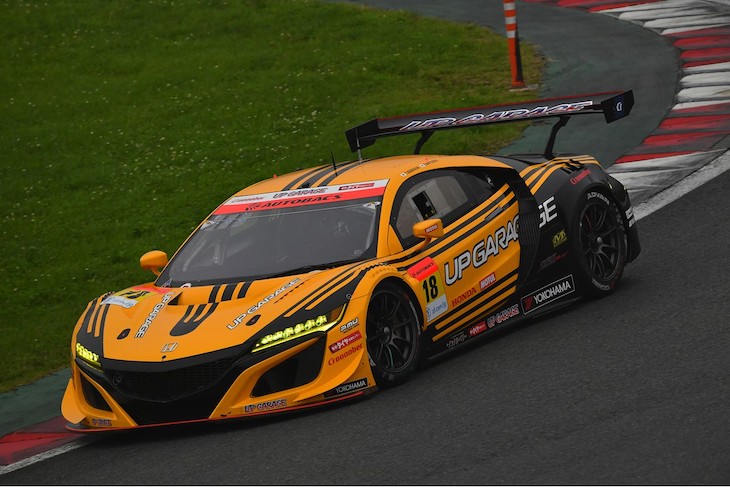 Same golden yellow and black colours for Team UPGarage on their #18 Honda NSX GT3 for Takashi Kobayashi and Kosuke Matsuura, but a new pattern from last year’s car. 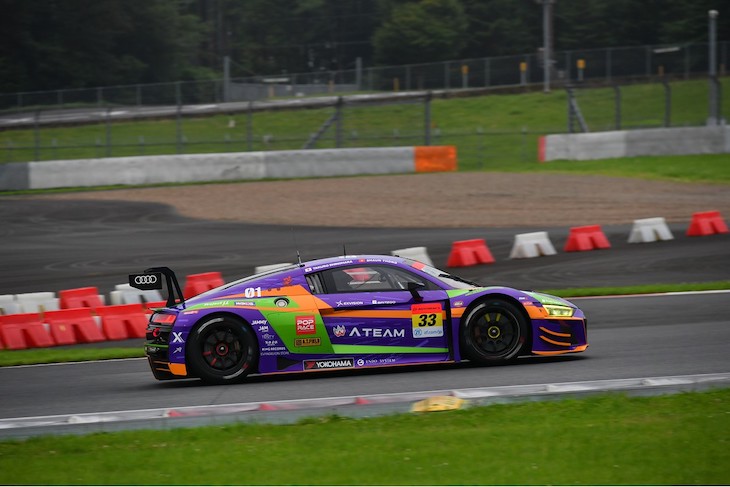 The familiar Evangelion colours were finally applied to the #33 EVA Racing X Works Audi R8, driven by Shaun Thong – and substitute driver Takuro Shinohara, who successfully passed his rookie test during the session and is looking forward to his first racing laps in Super GT. 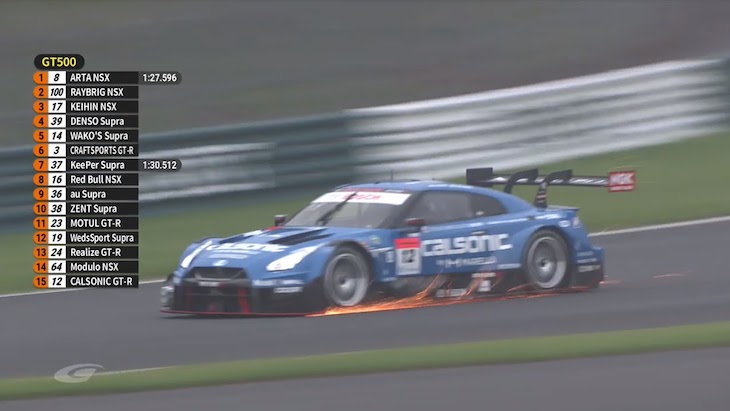 This overhauled graphics package was introduced in the Super GT x DTM Dream Race at Fuji last November and now becomes permanent for the 2020 season. It’s the first substantial overhaul of Super GT’s TV graphics since 2006.