There’ll be little time to celebrate before this afternoon’s season-opening Takanoko Hotel Fuji GT 300km Race, but Ryo Hirakawa claimed the fifth-generation Toyota GR Supra’s first pole position in the Autobacs Super GT Series in Sunday morning qualifying, securing the top spot on the grid for him and co-driver Nick Cassidy in a record-breaking qualifying session.

Q1 saw reigning GT300 Champion Nirei Fukuzumi smash the previous GT500 lap record at Fuji Speedway, set 14 months ago by Ronnie Quintarelli. His front-engined #8 ARTA Honda NSX-GT cut the beam with a blistering lap of 1’26.433, the fastest time throughout qualifying and more than good enough to put him and teammate Tomoki Nojiri through to Q2.

Fukuzumi’s lap was 0.438 seconds faster than Quintarelli’s pole-winning lap record from the 2019 Fuji 500km and would have been sufficient to qualify fourth on the grid for last autumn’s WEC 6 Hours of Fuji, ahead of all but the two Toyota TS050s and the sole Rebellion R13.

But Hirakawa’s #37 KeePer TOM’s GR Supra was fastest when it mattered most in Q2. With two minutes left, he turned in a hot lap 1’26.550, 0.115 seconds up on the ARTA NSX of Tomoki Nojiri – snatching a sure pole away from Honda after their cars had led Practice and Q1. Neither driver could improve as the chequered flag fell, and thus the 26-year-old Japanese driver and his Formula E-bound co-driver Cassidy secured pole position. It’s the fifth pole of Hirakawa’s GT500 career, and of course, the first for the Supra nameplate since November 2005 at Suzuka when the fourth-gen Supra took pole in its last race as Toyota’s flagship GT500 car.

It was a lacklustre qualifying for the new Nissan GT-R NISMO GT500s, the feared outcome after practice. Only the Michelin-clad #3 CraftSports Motul GT-R of Kohei Hirate and Katsumasa Chiyo made it to Q2, and Chiyo qualified the car 6th in the deciding session. Further down the grid, the #23 Motul Autech GT-R of Tsugio Matsuda & Ronnie Quintarelli – winners of both pole positions at Fuji last year – could do no better than 10th, while the #12 Calsonic Impul GT-R (Daiki Sasaki / Kazuki Hiramine) and the #24 Realize Corporation Advan GT-R (Mitsunori Takaboshi / Jann Mardenborough) will start in the back, 14th and 15th respectively.

In the GT300 class, Naoya Gamou gave the new Mercedes-AMG GT3 Evo its first pole position on its Japanese debut, driving the Bridgestone Potenza-clad #65 LEON Pyramid AMG to his third career pole position – where he and rookie Togo Suganami will start this afternoon. 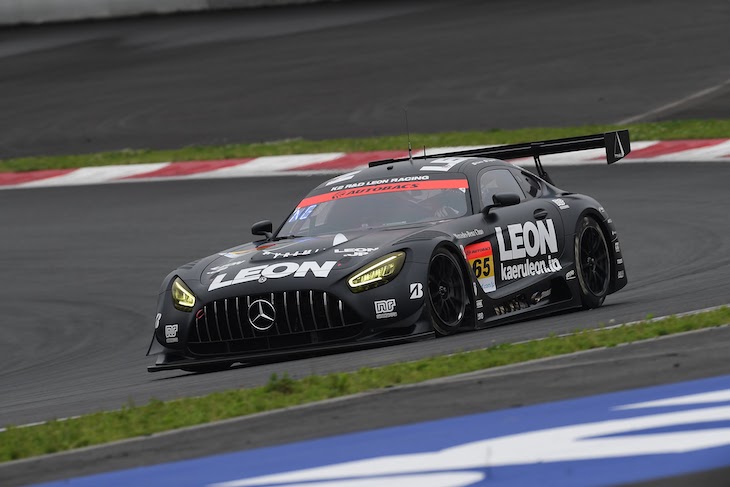 The other big story out of Q1 was several big hitters missing the cut in the two-group qualifying session, headlined by the #55 ARTA Honda NSX GT3 of reigning champion and nine-time Fuji GT300 class winner Shinichi Takagi, and rookie Toshiki Oyu, which will have to come from 22nd on the grid after missing the cut in Q1 Group A. Other notable exits include the #34 Modulo Kenwood NSX GT3 (Ryo Michigami / Jake Parsons) in 17th from Group B, and the #4 Goodsmile Hatsune Miku AMG (Nobuteru Taniguchi / Tatsuya Kataoka), starting 18th out of Group A qualifying where the top eight cars from each group advanced on to Q2.

Gamou’s best Q2 lap of a 1’36.236 was good enough to take pole position by just 0.061 seconds ahead of the Dunlop-clad #11 Gainer TanaX Nissan GT-R GT3 of Fuji 500km class winners Katsuyuki Hiranaka and Hironobu Yasuda, which qualified 2nd-fastest. Credit where it is due to Suganami, who recovered from a spin on a damp track in Q1 to set a lap good enough to get through to Q2 in just his fourth Super GT race, and the start of his first full season.

Third-quickest and best of the Mother Chassis cars was the grinning #2 Syntium Apple Lotus Evora MC of Hiroki Katoh and Masataka Yanagida, their best qualifying effort since the 2016 Suzuka 1000km, where they were also third-fastest after bringing in the aforementioned Tadasuke Makino to partner Katoh and the now-retired gentleman driver Kazuho Takahashi