Despite the challenges of the COVID-19 crisis Barwell Motorsport is set to continue to run two Lamborghini Huracan GT3 Evos in the revamped GT World Challenge Europe Endurance (GTWCEE) season.

There will though be some changes to the initially planned effort.

The Black Bull Silver Cup Huracan remains in the increasingly competitive class for young budding Pro drivers, but with one change to its original line-up, as young Finn Patrick Kujala will now take the seat previously occupied by Jordan Witt who hopes to rejoin the team next season. 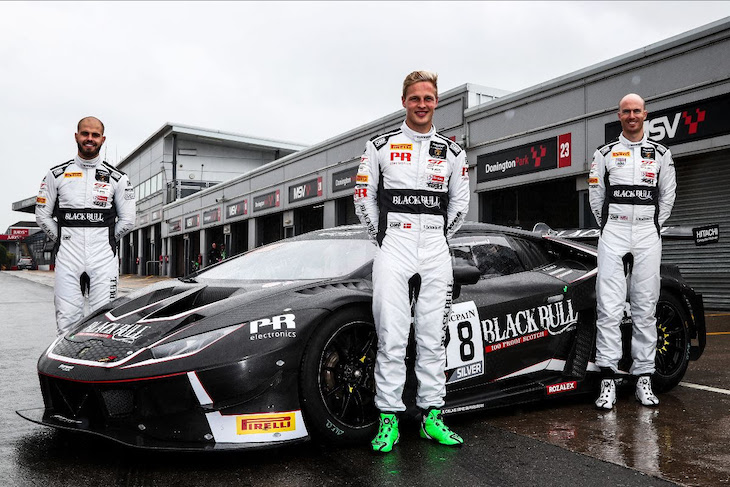 Kujala had been out of a drive following the withdrawal of the Rinaldi Ferrari effort. He rejoins Barwell having contested the 2017 Blancpain Pro-Am Cup season with the team, together with the 2018 Spa 24 Hours Am Cup and 2019 Barcelona 24 Hours.

The sister Vimetco Extrusion/Asterus-backed Lamborghini Huracan GT3 Evo will move across from the Am Cup to the Pro-Am class meanwhile.

Double Am Cup Champion (Blancpain Endurance 2018-19) and long-standing Barwell driver Leo Machitski is staying in the car as one of the Bronze grade drivers, but his partner of the last two seasons, Adrian Amstutz, has had to step away from racing this season due to clashing business commitments with the revised race event calendar.

Amstutz’s place will be taken by GT racing newcomer and newly discovered young talent, Rob Collard (51), who is moving across from racing in the British Touring Car Championship. Whilst Collard will be new to the European circuits, he will be getting plenty of mileage in the Huracan as he combines this programme with a second programme for Barwell in the British GT Championship in the same car.

The third driver in the revamped Pro-Am line up is 20-year-old Sandy Mitchell, who moves across from two very successful seasons in Barwell’s Silver Cup car to take the Pro driver ‘hot seat’ alongside Leo and Rob.

Having taken a stunning Silver Cup victory in the Spa 24 Hours last year, the Lamborghini Squadra Corse Official Junior Driver will be hoping to repeat that class result in 2020 as he tackles the Pro-Am Cup for the first time. The young Scot will be seeing plenty of Rob Collard this year as he is also teaming up with him in British GT for his first attempt at taking the overall British Championship title!

To further enhance the Barwell team’s ‘family’ feel, this trio of full season drivers will be joined at the Spa 24 Hours by Rob’s eldest son Ricky Collard. Ricky (23) had originally been scheduled to continue with the R Motorsport Aston Martin squad, but their temporary withdrawal from racing in 2020 gave Barwell an unmissable chance for a talented father-son combo.

Mark Lemmer, Team Principal Barwell Motorsport: “After dominating the AM Cup for the last two seasons with Adrian Amstutz, but with Adrian being unable to compete this season, Leo and I decided it was time for a new challenge. Leo loves competing in the GTWCE Endurance Cup, so with the Pro-Am class looking really strong this year, it makes perfect sense for us to have a crack at it. With Leo, Rob, and Sandy, I am confident we will be in the hunt for another title!”

Euan Shand, Chairman of Black Bull Scotch Whisky (Sandy Mitchell’s main sponsor) commented; “The last few months has been an extraordinary time and we’re eager to see Sandy and the team back on the racing track, doing what they do best. We’ve supported Sandy’s motorsport career since he was 15 and he has proved to be an extremely skilled driver with real tenacity behind the wheel. We’re excited to see him stepping into the Pro-Am arena for the first time and wish him all the best for the season ahead.”