Between qualifying and a race filled with intriguing storylines, GTA Chairman Masaaki Bandoh held his regular pre-race press conference this Sunday at Fuji Speedway to discuss a number of topics regarding the future of the Autobacs Super GT Series.

One of those topics was the potential return of spectators starting in the second half of the 2020 season, depending on the evolution of the COVID-19 pandemic in Japan. “For holding a race with spectators at the circuit, we are targeting the fifth round at Fuji Speedway on October 3 and 4, which is the first race of the second half of the season,” said Chairman Bandoh, reiterating the established plans to re-opening events to spectators.

Chairman Bandoh discussed the preventative measures taken for the season-opening Takanoko Hotel Fuji GT 300km Race this past weekend: “People who can enter the circuit during this event are limited to team members, limited event operation staff, and limited media personnel, totalling about 1,750 people. Those people were asked to submit a questionnaire on their health conditions on a daily basis from 2 weeks before the event, and, in addition, everybody entering the circuit had their body temperature checked at the gate during the event. That is what it took for us to finally reach here,” Bandoh said.

“After we are successfully able to hold this event by executing all these efforts required to prevent the spread of novel coronavirus, we will then prepare ourselves to be ready to hold support races and welcome the sponsors who we were not able to invite this time, it’s a step by step process.”

As for formats of future events, which haven’t yet been released as of the time of publication, Bandoh says he is open to reverting back to the more traditional “two-day” event format with Qualifying on Saturday and the Race on Sunday. “We are holding this season opener as a ‘one-day’ event by having the qualifying and the race in one day, but we are considering returning to a ‘two-day’ event for the second round at Fuji in August.”

The other big issue facing Super GT for the future is that of their technical partners at the Deutsche Tourenwagen Masters (DTM). This was Chairman Bandoh’s first opportunity to address the public on Super GT’s future plans with the DTM, the latter facing a bleak future after the announcement of Audi’s pending withdrawal from the European series at the end of 2020. 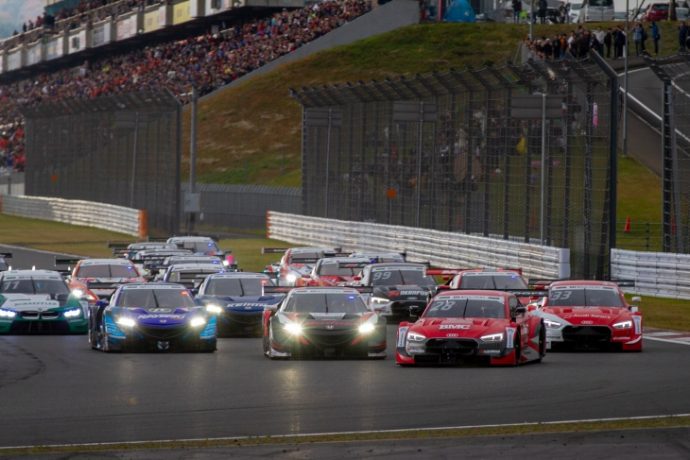 “We held a special inter-series race between DTM and Super GT in November last year, and we, the GTA, believe that was a significant accomplishment, not only domestically but also at a global level, and everybody involved is aware that we made a step forward,” Bandoh said.

“However, DTM is no different in getting a huge impact from the novel coronavirus, and Audi is withdrawing. I can imagine the situation is very difficult for the DTM operator ITR. It would be the best if we could hold a race event together with DTM, but, considering the current situation, that would be very difficult to achieve for a while,” admitting the likelihood of another cross-promotional Dream Race event could be slim to none. “We have not been able to discuss anything on an inter-series race with DTM at this moment.”

“However, the Class 1 regulations we created with ITR is a technical regulation, and we will continue to apply this to the GT500 class of Super GT. Our view on the parts we developed together and on taking things step by step and making steady progress on the concepts does not change, so, we will continue to put efforts in the partnership with ITR, although there is licensing discussion at the end of this year and we will also keep on working on that, and whatever we can cooperate and collaborate we will discuss and put our hands together.”

Chairman Bandoh had told auto sport Magazine of Japan in June that he is open to Super GT welcoming in manufacturers from overseas to take part in the series, expressing his view that the greatest potential for growth would be in Asia instead of Europe. He also stated that Super GT committed to the current GT500 “Class 1 + α” regulations until 2022. For 2023, Bandoh has said that the series is considering switching to renewable fuel sources, and hybridization, but that Super GT “has no intention of abandoning the sounds, smells & elements that stimulate the senses.”