Raffaele Marciello put the #88 Mercedes-AMG on top with a lap of 1m41.655s, hitting the front early in the 90-minute run and remaining in control throughout. His closest challenger was Jules Gounon, who gave American squad K-Pax Racing a perfect start to its European adventure aboard the #3 Bentley.

Gounon was 0.141s shy of Marciello in a typically competitive session. Indeed, the top-20 cars were covered by just 1.1s around the 4.9km circuit. All 46 contenders ventured out, though reigning champions Orange1 FFF Racing did not show their hand, leaving the #63 Lamborghini at the bottom of the order.

Third overall was Jim Pla, who led the Pro-Am runners with another excellent effort in his #89 AKKA ASP Mercedes-AMG. The French ace was followed by fellow countryman Patrick Pilet (#12 GPX Porsche) and Christopher Haase (#25 Sainteloc Audi). Barwell Motorsport led the Silver Cup class with its #78 Lamborghini thanks to Flying Finn Patrick Kujala, while the lone Am Cup car – CMR’s #108 Bentley, was 44th fastest overall.

The session was punctuated by three red flags, the first due to a displaced advertising hoarding at turn 19. Shortly after the restart the #44 SPS Mercedes-AMG made heavy contact with the #69 Optimum McLaren, sending the Oliver Wilkinson-driven car into the gravel. In the closing minutes, the #23 Imperiale Lamborghini tagged the #108 CMR Bentley, causing a stoppage that concluded the session. 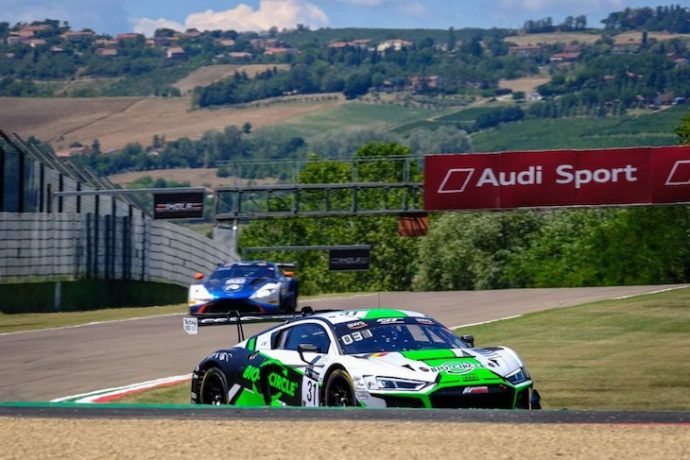 Having led both of yesterday’s official test sessions, the #31 machine was not among the leading contenders in this morning’s free practice. This afternoon, a 1m41.702s lap from Bortolotti shortly before the one-hour mark ensured a return to the top spot. Kelvin van der Linde and Matthieu Vaxivière will partner Bortolotti this weekend.

The Italian ace led a trio of Audi cars in the overall classification, beating the #66 Attempto machine of Frederic Vervisch and the #26 Sainteloc car driven by Arthur Rougier. The latter was also the top Pro-Am runner, capping an impressive display.

In the Silver Cup, Tech 1 Racing narrowly topped the times with its #15 Lexus. Aurelien Panis set the lap, edging out the #55 Attempto Audi driven by Nicolas Schöll. This duo finished seventh and eighth respectively in the overall classification.

All 46 cars ran in the session, with the lone Am Cup entrant, the #108 CMR Bentley, completing the order. Despite the competitive nature of the series, the session ran without a single stoppage and almost no off-track excursions.