The #31 Audi R8 LMS crew of Mirko Bortolotti, Kelvin van der Linde and Matthieu Vaxiviere executed a perfect race at the historic Italian venue, which came to life once again as a field of 46 GT3 cars tackled a thrilling three-hour contest. 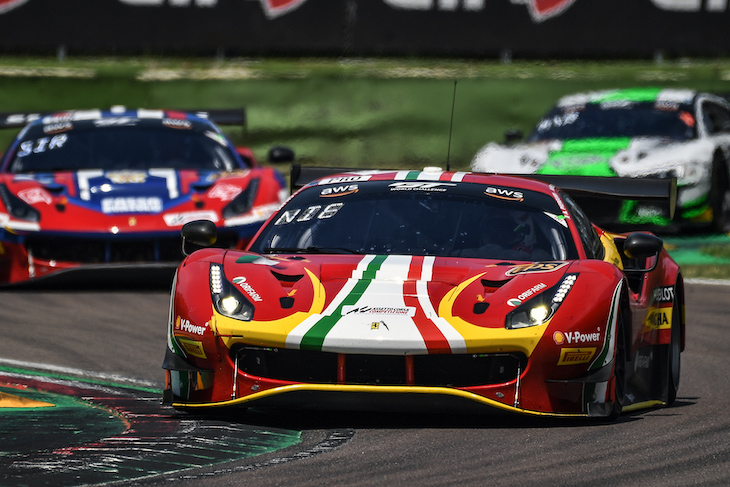 Each driver played a role in the team’s success. Vaxiviere took the start and ran fifth throughout the opening stages, which were led by the #66 Attempto Racing Audi of Frederic Vervisch. The pole-sitter maintained his advantage into the opening corner and showed good pace, pulling away from James Calado in the #51 AF Corse Ferrari. Raffaele Marciello slotted into third in his #88 AKKA ASP Mercedes-AMG, then snatched second with an inch-perfect pass on the Ferrari driver. 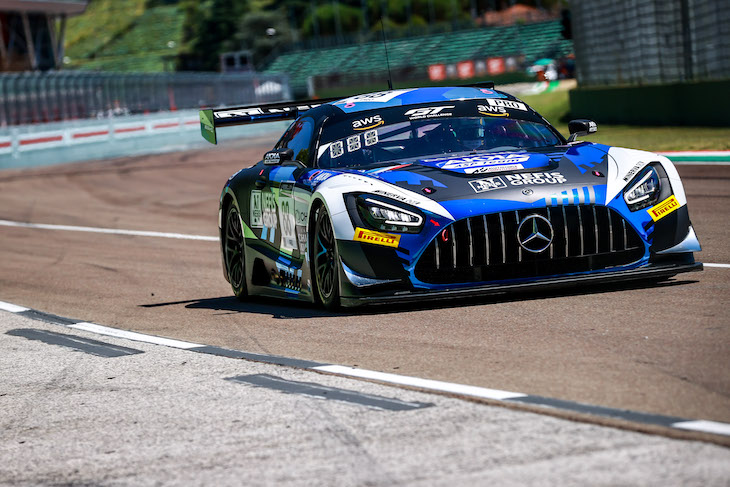 The first stint saw several full-course yellow periods following on-track incidents for several cars, and it was during the last of these that the pit window opened. A slow stop scuppered the Attempto car’s chances of victory, it rejoined in 20th place, while a pair of Ferrari runners vaulted to the front with two debutants at the wheel. Nicklas Nielsen took over the #51 AF Corse car that emerged in the lead, followed by Sergey Sirotkin in the #72 SMP Racing machine.

Van der Linde exited the pits in fifth spot, but the South African was in no mood to hang around. What followed was an overtaking masterclass, with moves on Louis Deletraz (#40 GPX Racing Porsche) and Timur Boguslavskiy (#88 AKKA ASP Mercedes-AMG) coming in quick succession. The two Ferraris were now in his sights and Van der Linde wasted no time in dispatching Sirotkin and then Nielsen to assume the lead.

Aided by a long stretch of green flag running, the WRT driver had built a lead of almost 20 seconds by the conclusion of his stint. Meanwhile, the #51 Ferrari received a drive-through penalty for speeding during a full-course yellow period, dropping it down the order. The Italian marque’s hopes were further dented when the #72 SMP Racing car endured a long delay in the pits. This left Davide Rigon outside the top 20, scuppering the Russian outfit’s chances of victory. 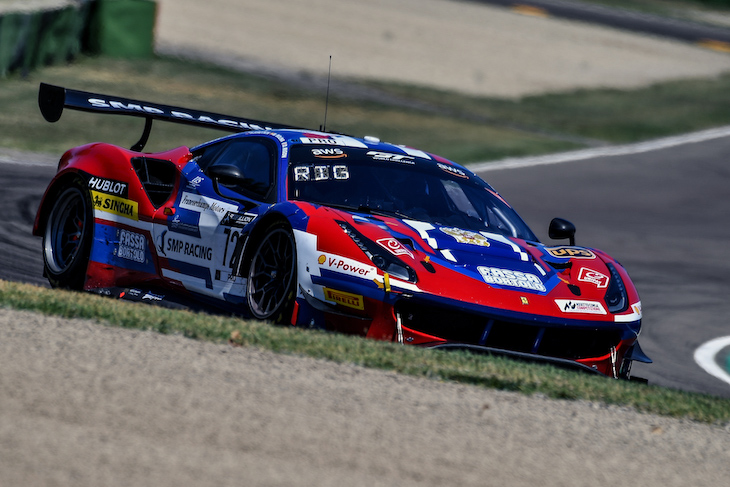 Bortolotti took the wheel of the #31 Audi and emerged with an advantage in excess of 25 seconds, but his job was by no means simple. A pair safety car periods bunched the field up, but the Italian judged each restart to perfection. After the second he eased away from his competitors, taking WRT and Audi’s first win in more than two years by a margin of 3.4 seconds.

Behind him, a fantastic battle for the podium ensured a grandstand finish, with Mathieu Jaminet (#12 GPX Racing Porsche) coming under heavy pressure from the #88 AKKA ASP machine of Felipe Fraga. The Brazilian had problems of his own, however, as Dries Vanthoor (#32 Belgian Audi Club Team WRT) closed on to the rear of the #88 Mercedes-AMG to make it a three-way scrap for second. 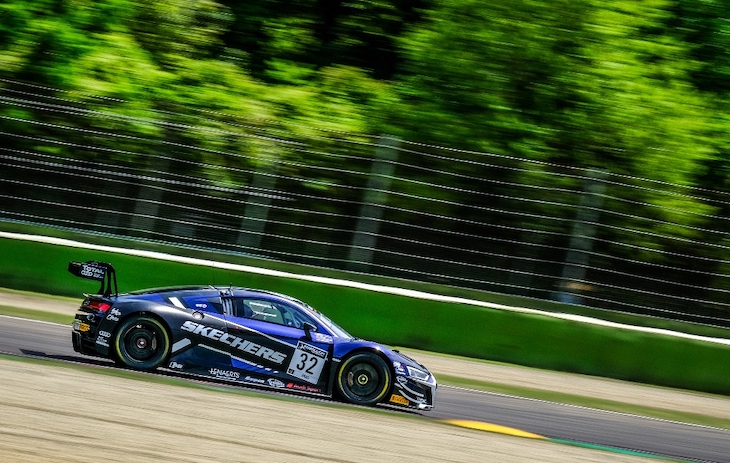 This was to Jaminet’s benefit, as Fraga had to defend from a typically determined Vanthoor during the closing laps. The Porsche ace crossed the line to take second spot, completing a polished performance from the #12 crew, while the #88 Mercedes-AMG captured the final place on the podium ahead of the #32 WRT Audi.

Fifth went to the #25 Sainteloc Racing Audi, followed by the #99 ROWE Porsche and the recovering #51 AF Corse Ferrari. Next came the #69 Optimum Motorsport McLaren, which took a strong eighth on its series debut thanks to Rob Bell, Joe Osborne and Ollie Wilkinson. 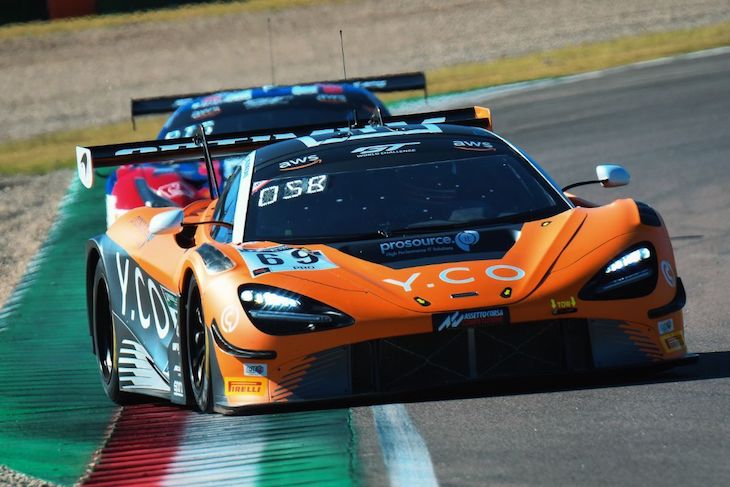 The #40 GPX Porsche and the #163 Emil Frey Racing Lamborghini completed the overall top-10. 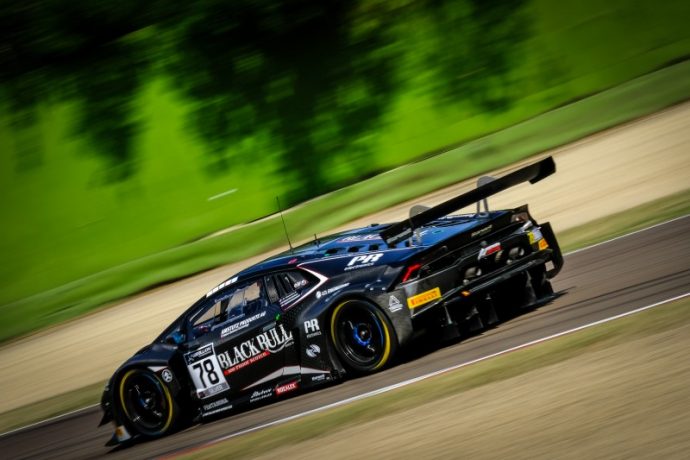 The Silver Cup class was won by the #78 Barwell Motorsport Lamborghini, driven by Patrick Kujala, Alex MacDowall and Frederik Schandorff, which emerged as a serious contender during the second half of the race and assumed the lead following a collision between class rivals Garage 59 (#159 Aston Martin) and Tech 1 Racing (#15 Lexus). The Aston took runner up spot, beating the Lexus after a close-fought battle that ran for much of the three-hour contest. 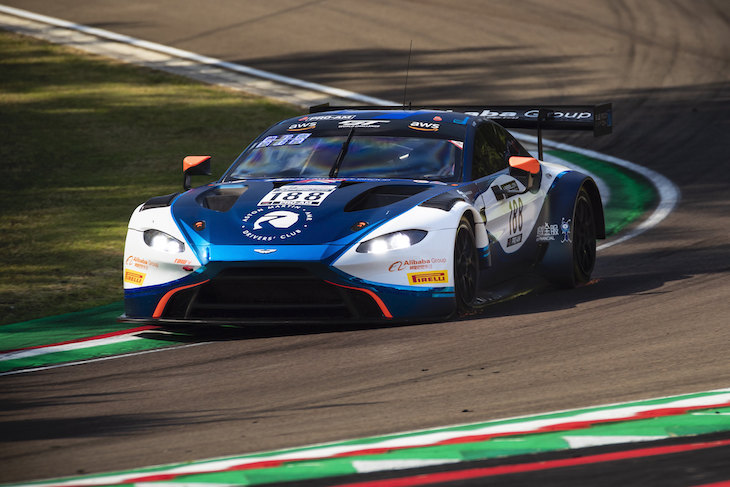 Though they missed the Silver victory, Garage 59 were clear winners in Pro-Am as the #188 Aston Martin finished an excellent 14th overall. Indeed, the British squad was nine places clear of its nearest rival at the finish thanks to an excellent showing from the crew of Alexander West, Chris Goodwin and Jonny Adam. Runner-up went to the #93 Sky Tempesta Racing Ferrari, which was less than a second clear of the #26 Sainteloc Audi. The #108 CMR Bentley of Bernard Delhez, Romano Ricci and Stephane Tribaudini ran in the Am Cup class and took the chequered flag in 31st place overall. Following the opening Endurance Cup round, GT World Challenge Europe Powered by AWS will remain in Italy for its next event, which will see the Sprint Cup kick off with a trio of one-hour races at Misano (7-9 August). The Endurance Cup will resume with a six-hour contest at the Nurburgring on 5/6 September.

Mirko Bortolotti: “Honestly, I have no words. This is a fantastic result, it’s a fantastic feeling to win at home, in a new championship, with a new car, debuting with Audi and in my first race together with Belgian Audi Club Team WRT.

“The team did a terrific job and gave us a perfect car and strategy. I can only have words of praise for my teammates for the mega work they did. Matthieu, who joined us almost last minute, was perfect in the first stint, and Kelvin had a tremendous drive, with many brilliant overtakes. They really made my job easier in the last stint.

“This was a perfect day, winning the first race of the championship at home.”

Raffaele Marciello: “For us, this was a good start into the 2020 GT World Challenge Europe. Unfortunately, I was unable to make any more progress in the dense traffic at the start of my stint. Otherwise, we perhaps could have achieved a little more with the performance we had today.”

Felipe Fraga: “After a long time, we were sharing driving duties in the car again. I am very happy to be back at the race track. The car worked very well, but due to the many safety car interventions, we couldn’t achieve anything more. We can be happy with third place, it is a good team result.”

Maro Engel: “I made a good start, but after only a few moments, I found myself off-track in the turmoil. Sadly, a drive-through penalty came on top of that. I feel sorry for the team that had given its all. Today wasn’t our day, but now, it is all about taking on the next duties while remaining fully concentrated.”

Joe Osborne: “Starting in 22nd, we had a battle plan for the race and we followed it perfectly. My stint was a bit difficult with so many full course yellows, so we went a lap longer than some of the others before pitting and that was the right call, then Ollie had a great stint, going beyond what we had targeted for him. Rob then did what Rob does and that moved us up to P8 overall. It was a successful day at the track and we’re feeling really positive going forward!”

Ollie Wilkinson: “I didn’t dare dream that we’d be able to turn 22nd on the grid into eighth at the flag, and to gain our first championship points of the season in the first round. I can’t thank Optimum, McLaren, Joe and Rob enough, or see what the rest of the season has in store.”

Rob Bell: “Everyone did really well; Joe and Ollie kept it clean and I bided my time a little in the closing stages, used a bit of experience and gained two spots on the run to the flag. It’s the first race for the McLaren 720S in this championship, the first for the team and the first for Ollie. To finish eighth in such an amazing and competitive championship today was an excellent result.”

Maximilian Buhk: “A top ten result would have been a good result after starting from 21ston the grid. In the race, we made good progress, we performed without any mistakes both on track and in the pits. Therefore, we can be happy with our performance as a team. When we analyse and implement everything correctly, we will be contenders in this very well-balanced field of competitors as well.”

Dries Vanthoor: “It’s a good result, we certainly didn’t expect it before the race, as we were starting from P15 on the grid. Still, we came so close to second and third… but it’s a great team result and we are scoring very good points. We hope to take even more at the next race at the Nürburgring, which is on a 6-hour format and will offer even more points…”

Charles Weerts: “It’s a good start of the season, and we are happy of our race, which was good. We came back from P15 to take fourth and score some heavy points, so that was good damage limitation.” 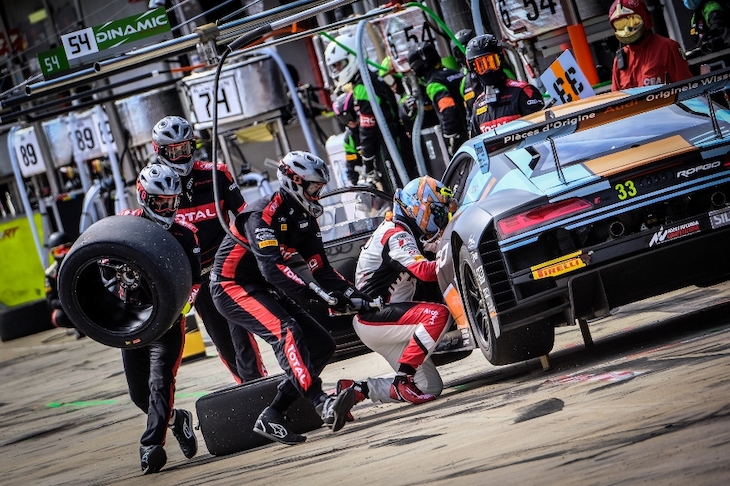 Stuart Hall: “Not an easy race and quite a disappointment for us. Rik did a good job in the first stint, then we had a perfect call for the first pit stop, rejoining 5th in the class and making another position before being assaulted by one of the McLarens. The team was quick in the repairs and Benjamin had an excellent final stint, but we couldn’t retrieve our position, that’s racing.”

Jonny Adam: “I’m very happy with that. A victory in Pro-Am and almost a win in Silver. There’s actually not a lot to say as the car ran like clockwork all weekend, the team did everything right and Chris and Alex drove exceptionally well throughout. It’s good to get points on the board for the championship. It’s a shortened championship with just four races so you need to score every time, which makes this the perfect result. We go to the Nürburgring next and that should suit the Vantage GT3 well so I’m feeling positive.”

Andrew Watson: “A brilliant team result from today. It could’ve also been a win for us but it’s really encouraging that we are competitive. Starting at the sharp end is the perfect way to begin a new season. Valentin did an amazing job. He was spun out by another car when he was in the lead but he kept his head and climbed a position with just a couple of laps to go. The Vantage GT3 ran beautifully this weekend and the team really went the extra mile for us. They worked really hard on all the little details over the off season and here we are with a double podium.”