Kunimitsu Takahashi, the trailblazing 2-wheel and 4-wheel racing legend was presented with the Sportsperson of Merit Award from the Japanese Ministry of Education, Culture, Science, Sports, and Technology (MEXT) in a ceremony held in Tokyo on 27 July.

He is the first person from the world of auto racing to receive this award, and the fourth motorcycle rider to receive the honour after Daijiro Kato, Hiroshi Aoyama, and Takahisa Fujinami. 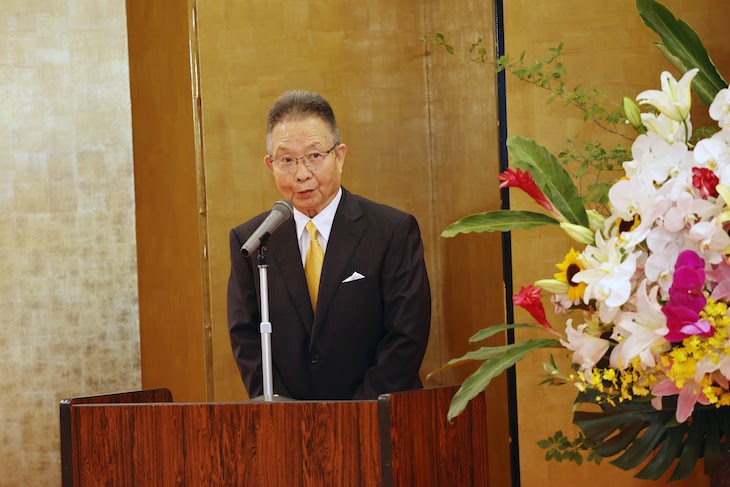 Takahashi received this Sportsperson of Merit Award from MEXT primarily in recognition for his work as a motorsport organiser and promoter. He served as the first Chairman of the GT Association (GTA), organisers of the All-Japan Grand Touring Car Championship from 1993, until 2007 when the series was known as Super GT. Takahashi has also served as a director of the Japan Automobile Federation (JAF) and the Motorcycle Federation of Japan (MFJ) during his post-driving career.

It’s the latest of a growing list of accolades for a man who has already been inducted into the Japan Automotive Hall of Fame (2002), the 24 Hours of Le Mans Hall of Fame (2013), and was a charter member of the MFJ Hall of Fame (2018) – contributions that now span eight different decades from the beginning of his two-wheeled racing career in 1958.

It’s as good a time as any for DSC to take time and reflect on the great career of the man nicknamed “Kuni-san”. 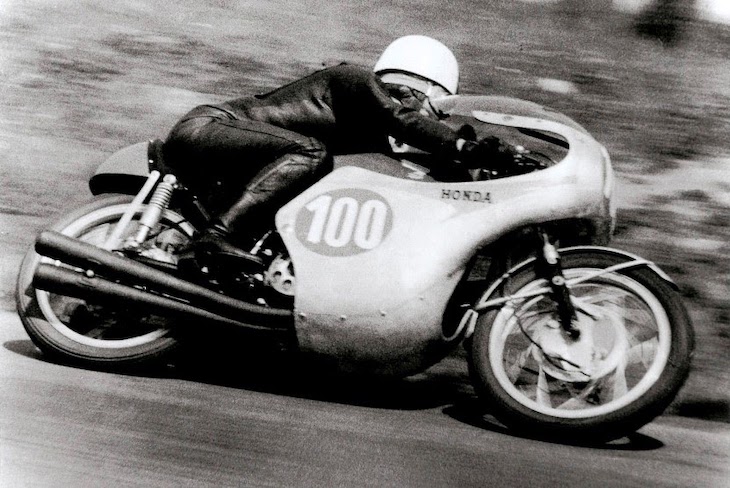 Takahashi first came to prominence through success in the All-Japan Motorcycle Endurance Road Race around Mount Asama. He made history on an international level with the Honda Speed Club factory team, by winning the 1961 West German motorcycle Grand Prix in the 250cc category, making him the first Japanese rider to win a World Grand Prix race.

Takahashi would win four races in total and collect 14 podiums across all classes of World Grand Prix racing. He suffered serious injuries in a crash during the 1962 Isle of Man Tourist Trophy, which led him to ultimately switch to four-wheel racing by 1965. 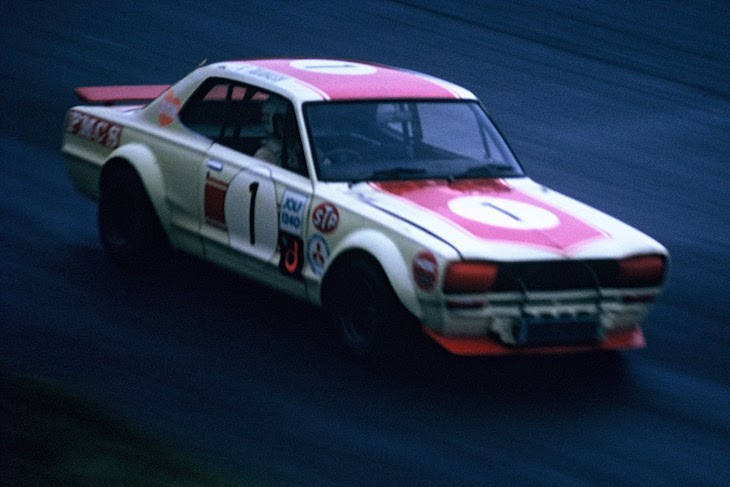 “Kuni-san” emerged as an ace driver during the heyday of the first-generation Nissan Skyline 2000 GT-R – the “Hakosuka” Skyline claimed a record 50 consecutive victories in competition from its debut in 1969, through March 1972, when Takahashi won a wet 300km race at Fuji to secure the milestone victory.

That run of 50 straight victories also included Takahashi’s five wins in five races to take the 1970 All-Japan Drivers’ Championship T-II Division title, and included a win in the Touring Car B Race during the 1971 Japan Grand Prix at Fuji. In another legendary Nissan sports car – the Fairlady 240Z – Takahashi began racking up his first major endurance race successes: The 1970 Fuji 1000km, the 1971 Race de Nippon 6 Hours of Fuji, and the 1973 Suzuka 1000km. 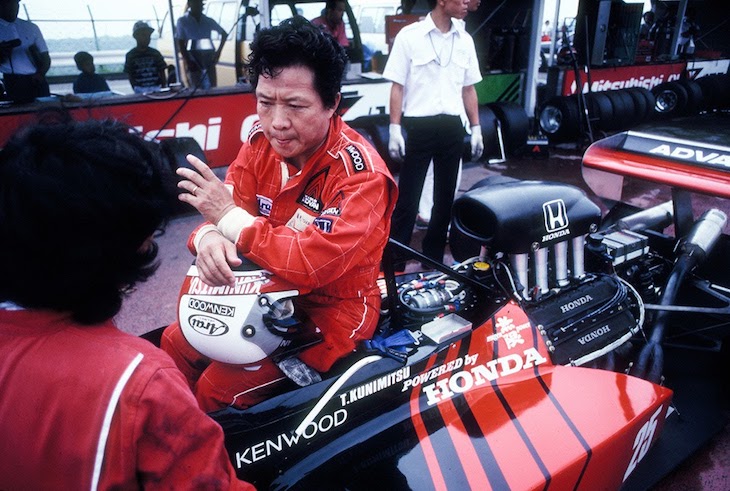 By the late ‘70s, Takahashi was now a fixture in the open-top prototypes of the Fuji Grand Champion Series. And he was a star in Japan’s Top Formula racing series. His successes led him to a one-off opportunity to drive in the 1977 Formula 1 Japanese Grand Prix at Fuji. Driving a second-hand Tyrrell 007 owned by the Meiritsu Racing Team, Takahashi drove to a 9th-place finish on a grim October day, marred by the deaths of marshal Kengo Yuasa and photographer Kazuhiro Ohashi.

The greatest moment of Takahashi’s single-seater career came when he won the 1978 JAF Suzuka Grand Prix, the season-ending crown jewel of the All-Japan F2 season. He withstood the threat of international rising stars like Riccardo Patrese, Bruno Giacomelli, Derek Warwick, René Arnoux, and the young Japanese star Satoru Nakajima, en route to what was viewed as the biggest single race victory of his career at the time. 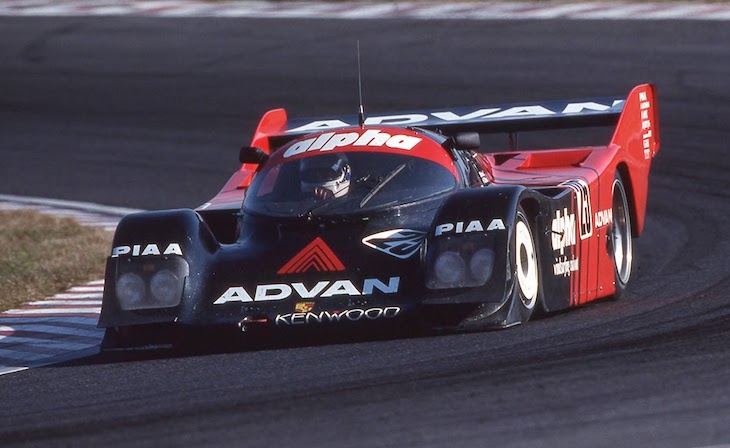 Takahashi would find his greatest success in the height of the Group C prototype era in the ‘80s. Driving for Nova Engineering in their black and red Advan-sponsored Porsche 956 and successive 962C, Takahashi dominated the All-Japan Endurance/Sports Prototype Championship (JSPC).

Takahashi was also a contender in the early days of Group A touring car racing in his Mitsubishi Starion coupé. He was the 1986 All-Japan Touring Car Championship runner-up in the large-displacement division and picked up three victories and six podiums from ‘86 to ‘88.

All of Kuni-san’s success in Group C prototype racing in Japan inevitably led him to his first appearance in the 24 Hours of Le Mans. From 1986 to 1990 he drove for Porsche Kremer Racing in their 962C and 962CK models. But in those first five appearances, he’d only finish in the top ten once, a 9th-place result in the ‘88 running alongside countryman Hideki Okada and long-ago F2 rival Giacomelli. As for the low points, Takahashi walked away from a spectacular fire suffered with hours to go in the ‘89 race, his third non-classified effort in four years. 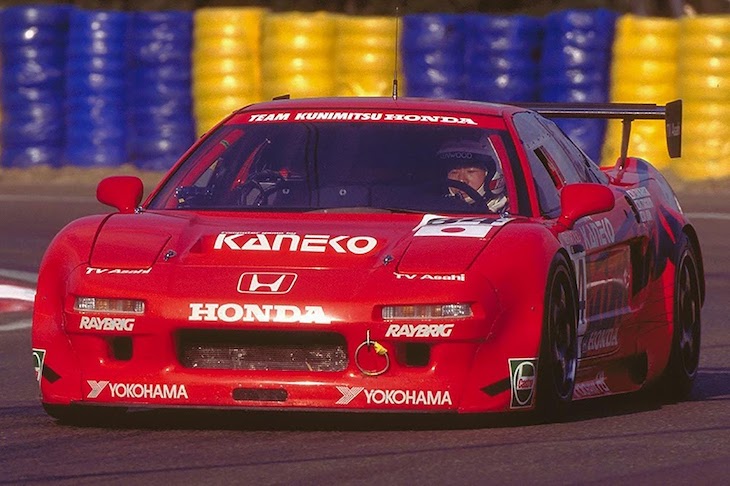 In 1992, Takahashi established his own team in the JTC, Team Kunimitsu, fielding the mighty R32 Nissan Skyline GT-R for himself and his greatest admirer Tsuchiya, forming quite the dream team. Two years later, Team Kunimitsu would collaborate with Honda on a return to the 24 Hours of Le Mans – bringing Kuni-san’s career full circle. The Team Kunimitsu Honda NSX GT2, prepared by Kremer Racing and constructed in the UK by John Thompson, would see the chequered flag in its 1994 debut – driven by Takahashi, Tsuchiya, and young Nissan factory driver Akira Iida.

In 1995, Takahashi, Tsuchiya, and Iida returned in the only LMGT2-spec NSX in the field. In their second 24 Hours of Le Mans together, the red number 84 NSX GT2 started the race six laps down in the pit lane due to a last-minute mechanical issue. They returned to the track to drive into the night through perilous rain, and with their reliability and efficiency, they chipped away at the deficit. By morning, the red Honda seized the class lead from the heavily-favoured Jelinski-Agusta Callaway Corvettes.

After 24 hours, the red #84 Honda – anchored by its 55-year-old owner/driver Takahashi – completed 275 laps, enough to win the LMGT2 category by a margin of two laps, with an 8th place overall result. The first victory for the manufacturer, the first for Takahashi, Tsuchiya, and Iida, and another landmark for Japanese endurance racing on the same day that Masanori Sekiya became the country’s first overall winner at Le Mans.

The Takahashi/Tsuchiya/Iida trio would compete together again in ‘96, finishing 3rd in LMGT2, 16th overall, in Takahashi’s last Le Mans start. This was also notable as Stanley Electric’s Raybrig brand of aftermarket vehicle lights became the title sponsor, the beginnings of a partnership that has extended nearly a quarter of a century since.

Takahashi’s twilight years as a driver saw the birth of Honda’s first full-fledged factory GT500 programme in the JGTC. The Mooncraft-designed, royal blue Raybrig NSX-GT of Takahashi and Iida instantly became one of the most recognizable cars in the series – and it still is today, throughout its many variations.

Takahashi bowed out of driving in 1999, but not before notching up the last two victories of his career: The 1998 JGTC race at Central Park Miné Circuit, at 58 years old, and the 1999 All-Japan Fuji GT Race, at 59. These are high marks that will surely never be broken. His driving career alone spans 35 seasons, from the dawn of Japanese automobile racing to the television and video game generation that kicked the JGTC’s popularity into overdrive. 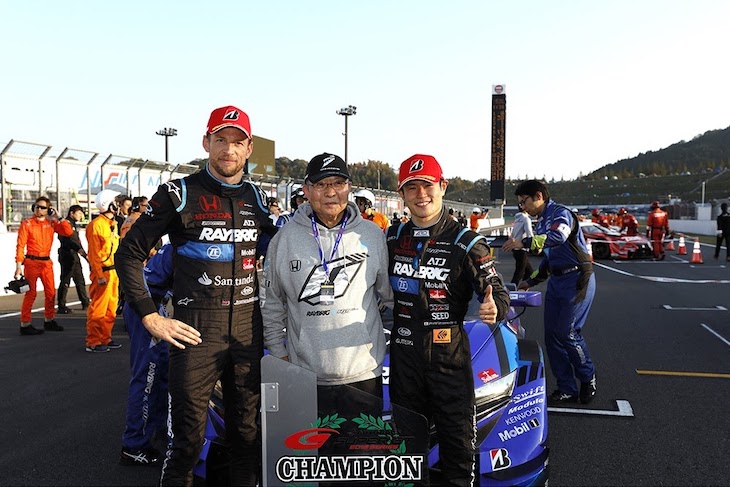 With Takahashi now retired from driving, his team challenged for the GT500 crown in the JGTC/Super GT during and after his tenure as GTA Chairman. But Team Kunimitsu would be subject to a few lengthy dry spells between victories, and they went nearly a quarter-century until winning their first championship.

The breakthrough came in 2018, the year that 2009 Formula 1 World Champion Jenson Button was partnered with Honda’s ultra-talented Japanese ace Naoki Yamamoto. The skill and consistency of “Naoki & JB” brought Team Kunimitsu and the Raybrig NSX their first GT500 Championship decided in a nail-biting season finale at Twin Ring Motegi. At that moment, Button added another chapter in a hall of fame racing career, Yamamoto was rightfully recognized as one of the best drivers on any corner of the world, and the man who helped launch Super GT from the very beginning and was there since the first season, finally saw his team crowned champions.

During the 2019 MotoGP TT Assen, Takahashi performed a lap of honour around the fabled Dutch cathedral of two-wheeled racing to celebrate Honda’s 60th anniversary of Grand Prix racing. In an interview with Motor Sport Magazine, motorcycle writer Mat Oxley commented, “Takahashi’s lap was a poignant and memorable moment for all kinds of reasons, most especially because this kind of connection won’t be possible forever, just like D-Day veterans walking the beaches they first trod back in 1944. We should appreciate these moments much more than we already do.”

In a similar spirit, with his ongoing contributions to motorsport now recognized by his home country, now is the perfect time to appreciate all that Kunimitsu Takahashi has accomplished in his incredible racing life, while he’s still with us to celebrate the victories that are yet to come.