After a stellar final pitstop that vaulted them to the lead of the race, the #3 Motorsports In Action McLaren 570s GT4 of Sheena Monk and Corey Lewis took home the win in the Michelin Pilot Challenge race from Road America.

With this win, Monk becomes just the third woman to win a race in the Michelin Pilot Challenge or any of its previous iterations. It’s also a significant milestone for her personally after she suffered a serious crash at Laguna Seca in 2018.

“I don’t have words right now, it doesn’t feel like it has sunk in,” Monk said after the race.

“It’s been a long road for me, I had a bad accident and this is my first win since that happened. This is a big deal for me personally. I could have left the sport but it’s my dream to be here,” Monk added.

The race-winning move came with just over thirty-minutes to run when the #3 McLaren crew erased an eight-second deficit in their final pitstop and sent Lewis back out on track just as previous race-leader Kyle Marcelli in the #60 Kohr Motorsports Aston Martin Vantage was crossing the line.

Marcelli in the #60 Aston Martin had tyres that were already up to temperatures and challenged Lewis, but ultimately he could not retake the lead. That left Marcelli and teammate Nate Stacy to settle for second place.

Rounding out the podium was the #39 Carbahn Motorsports Audi R8 GT4 of Jeff Westphal and Tyler McQuarrie. The top three finishers in GS spent much of the race nearly 30-seconds clear of the rest of the field who were scraping behind them for spots in the top five and ten.

While a handful of cars fell victim to scraps and spins, only one incident was serious enough to bring out a Full Course Yellow. On the exit of Turn 7, Billy Johnson in the #4 Winward Racing Mercedes-AMG GT4 dropped a wheel off the curb on exit that sent the car careening into the wall leading to significant damage to the front of the car. Johnson climbed from the car on his own and appeared to be uninjured.

That was the only Full Course Yellow of the race, but it came with under two minutes left to run, leaving the race to end under yellow.

The #35 Riley Motorsports Mercedes-AMG GT4 of Dylan Murray and Jim Cox finished the race in fourth but were some 20-seconds behind third place and nearly a full minute behind the race-winning car at the chequered flag. Those margins are a prime example of the speed the top three cars had over the rest of the field. 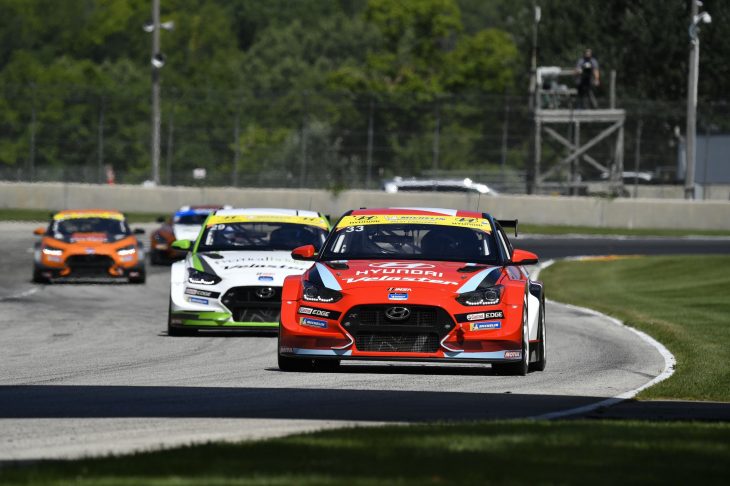 “It’s fantastic, we haven’t been on the podium yet and we go straight to the top, that’s how we roll,” Chaves said after the race.

The only drama for the Hyundai entries came early in the race when they crashed into each other. A brake issue sent the #98 Bryan Herta Autosport Hyundai Veloster N TCR sliding into their teammates in the #21 Hyundai at Turn 1.

The #21 Hyundai got away with little damage but the #98 Hyundai’s brake issues persisted and left Michael Lewis and Mason Filippi to settle for eleventh in class.

Fan-favourite driver Ryan Eversley and Taylor Hagler in the #77 LA Honda World Racing Civic TCR suffered wiring harness issue which needed to be repaired. After that was fixed, the hood pins broke leaving the hood to fly up and block Hagler’s view of the track. Hagler and Eversley finished tenth in class.

The next Michelin Pilot Challenge race will be at VIRginia International Raceway on August 21/23.